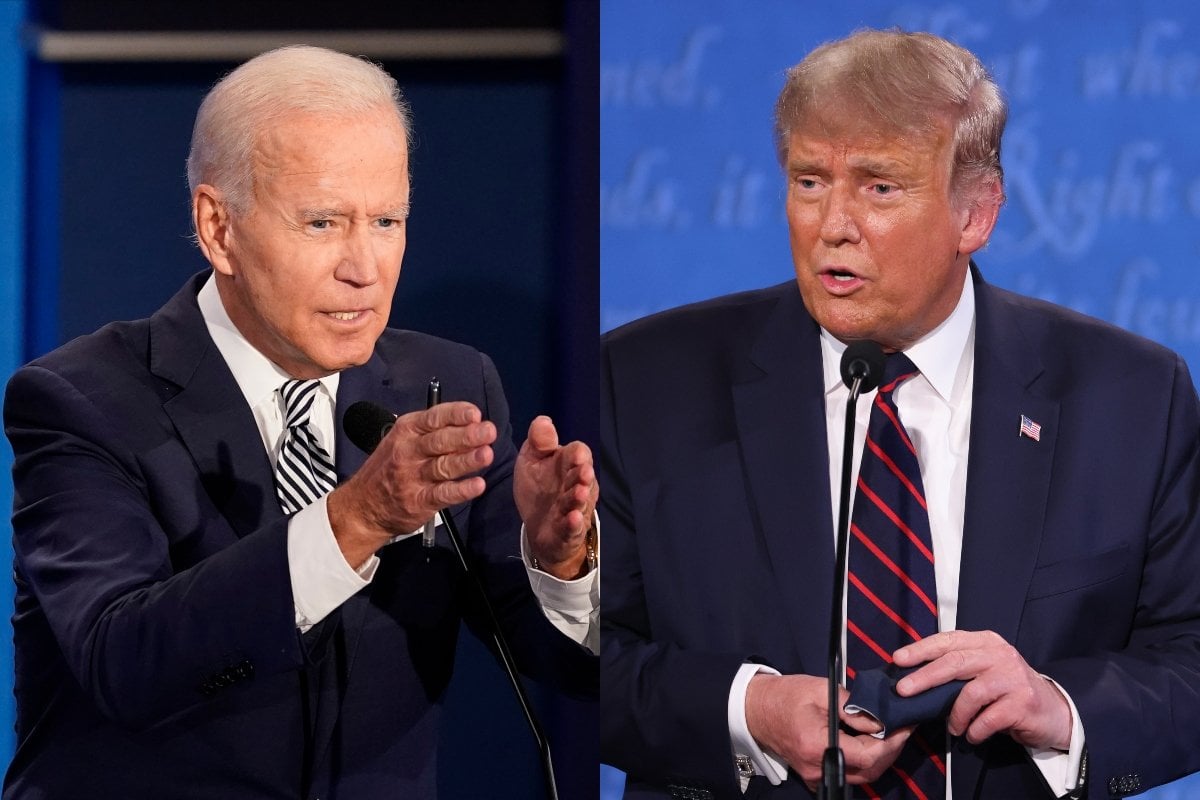 It's the moment we've all been waiting for (well, besides January 1, 2021): United States presidential debate time.

What greater way is there to spend 90 minutes than by watching two men with invariably differing views and zero respect for each other debate about issues that will deeply impact hundreds of millions of people, while they remain rich and powerful no matter the outcome?

I, for one, simply can't imagine anything better. Except perhaps skipping the debate and allowing an extremely unqualified woman in Australia to tell you about it.

It's 10.55am and I've just gathered all the snacks I could find. I'm going to need them for this... clusterf***. It hasn't begun, and I'm already claiming this is a mess. Feels like a safe bet.

Hello, sir, you certainly pulled the short straw, didn't you?

He says the candidates won't shake hands because of that pesky pandemic thing, which is very convenient because THEY HATE EACH OTHER. 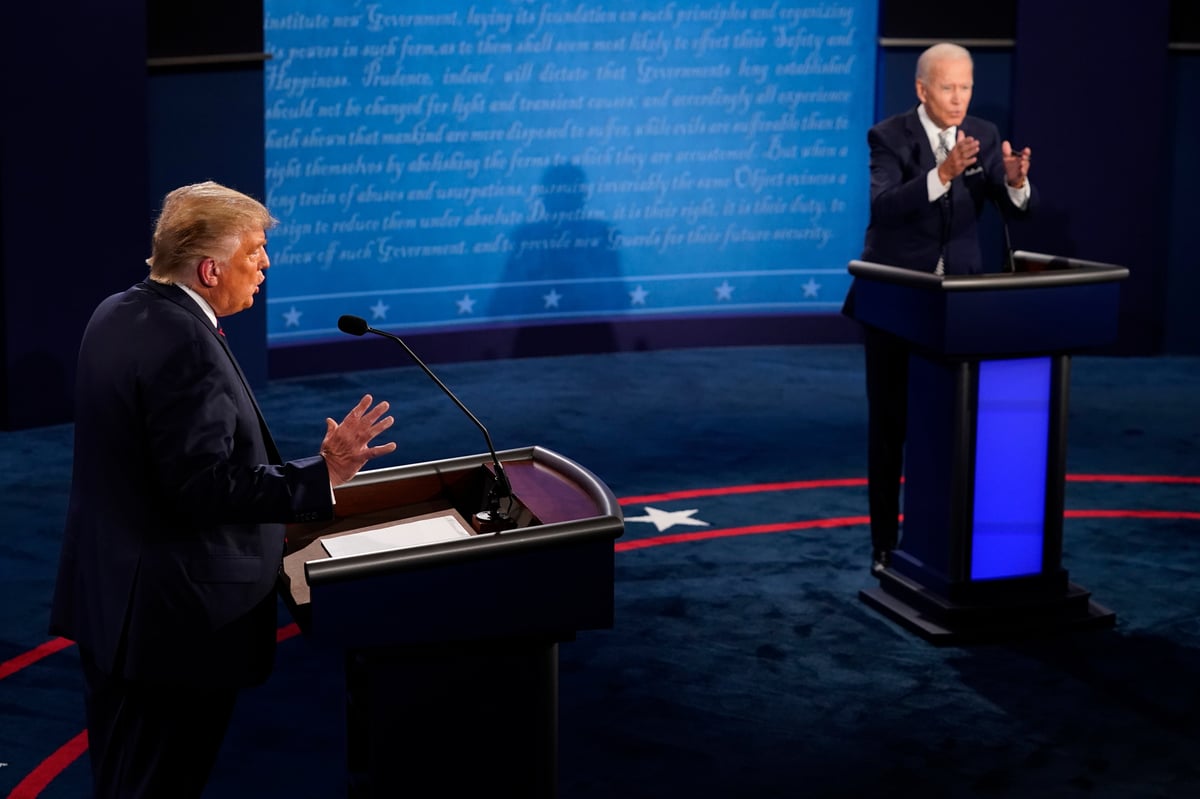 The small, mask-wearing crowd aren't allowed to cheer or boo either.

Because if there's one thing we need more of in 2020, it's silence to sit alone with our thoughts.

OKAY, LET'S DO THIS.

The first topic is the Supreme Court - we're starting off nice and light!

Trump says he gets to choose a nominee because he was elected for four years and Biden says the election period has already begun, so therefore it shouldn't happen until after the 2020 decision.

Trump says his nominee, Amy Coney Barrett, is "good in every way" except that Handmaid's Tale cult thing, I guess.

They yell at each other a little, and I'm already sick of it. This is going to be a long night.

For some reason we're now talking about healthcare, and Biden reminds everyone of how pre-ObamaCare, women were disproportionately impacted because pregnancy was considered a pre-existing condition???????

Trump calls Biden a socialist which is... hilarious for precisely anyone who understands what that word actually means. Somewhere, Bernie Sanders is cackling. 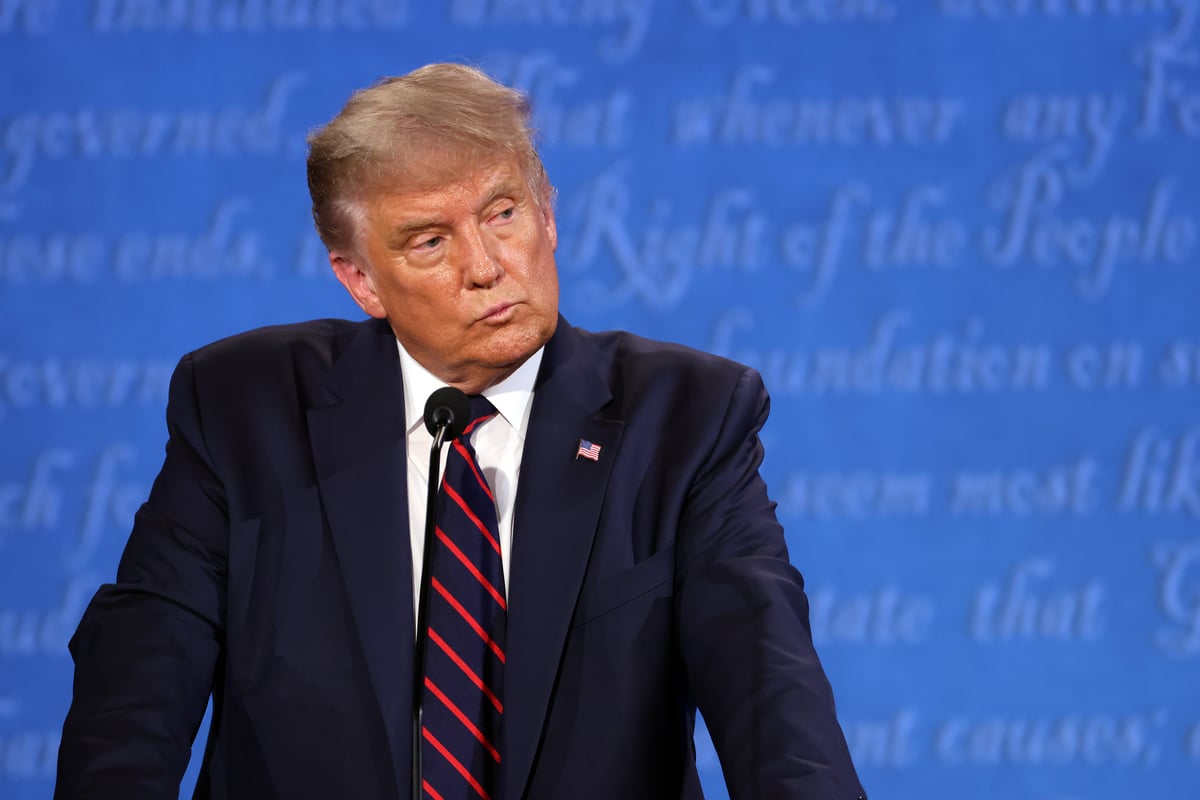 Biden argues that Trump's conservative-stacked Supreme Court puts Roe v. Wade, aka American women's rights to safe and legal abortions at risk, and Trump says something about people in the military dying.

I'm confused, Biden's confused, the moderator is confused and WE KNOW Trump is definitely confused.

WAIT. TRUMP IS NOW ARGUING WITH THE MODERATOR.

Sir, this guy is from Fox News. Aren't you... friends?

"I'm the moderator and I would like you to let me ask this question," Mr Fox News Moderator Man says.

"What is the Trump healthcare plan?"

Trump says he's made drugs so cheap "like water", perhaps forgetting that... water... is... free.

They then talk over each other.

Thirteen years later, Mr Fox News Moderator Man says they were talking about the Supreme Court and... oh yeah. How did we get here (in this debate, in this year, in this... life)?

Biden says Trump, who is berating him about the 'radical left', isn't acting Presidential.

I for one am SHOOK.

It's time to talk about COVID-19 which Mr Fox News Moderator Man reminds them is VERY SERIOUS, so if we could stop acting like six-year-olds that would be very much appreciated.

Biden reminds us of that time Trump said 'it is what it is' when confronted with the US' COVID death toll.

"It is what it is is because you are who you are," he says, pointing at Trump.

"You should get out of the bunker and the sand trap in your golf course," he says, insulting the president where it hurts the most: his golf skill.

Trump says it's China's fault and we're weeks away from a vaccine even though the fake news media won't report on it.

Tick it off your bingo!

Mr Fox News Moderator Man says Trump has contradicted the government's top scientists who say there's no way a vaccine will be available before November.

Biden says Trump said COVID would be gone by Easter. And then there was that whole bleach thing...

"Do you believe for a moment what he's telling you?" Biden says. 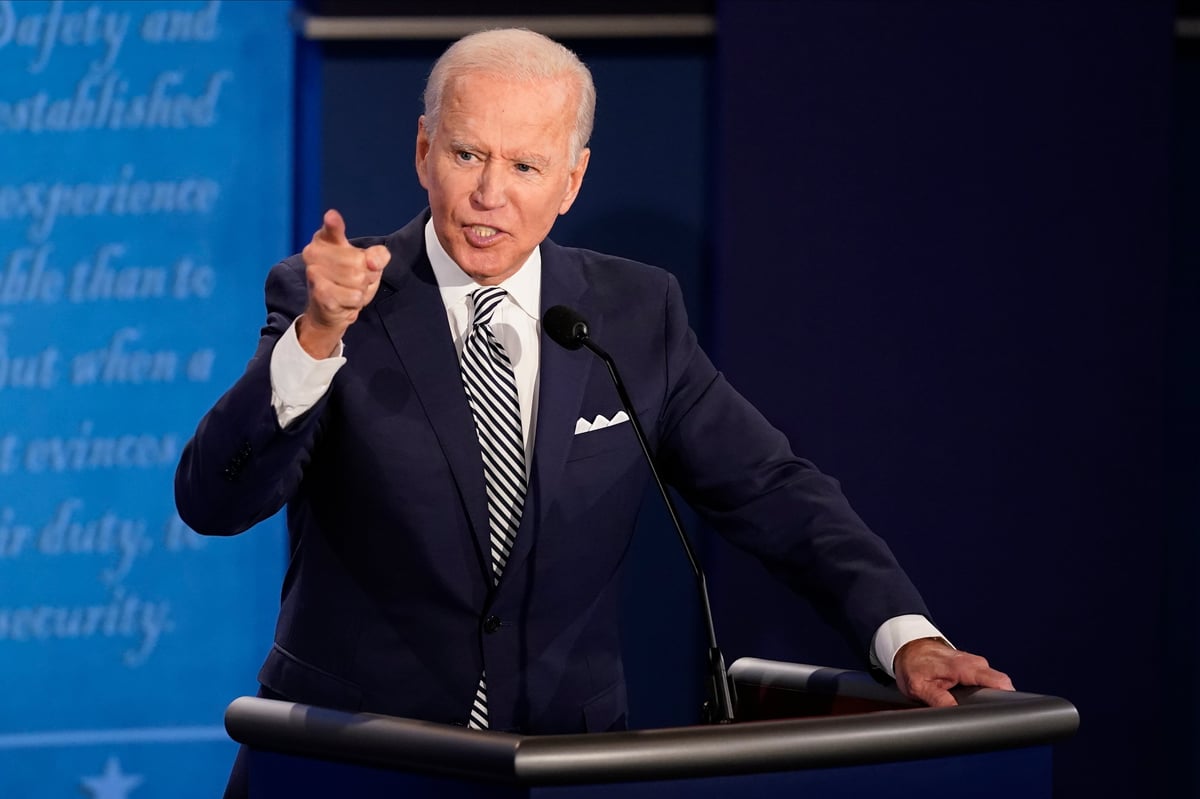 Trump then says something about how Biden isn't smart because he graduated from college? Like, a real one, not Trump University.

"I think masks are okay," Trump says, pulling out a mask with a Presidential seal on it. He then mocks Biden for wearing masks.¯\_(ツ)_/¯

They start talking about the economy but also the alphabet?

Another one for your bingo cards, my friends.

Trump argues shutdowns are bad and people can be trusted to keep themselves safe through social distancing and mask wearing: 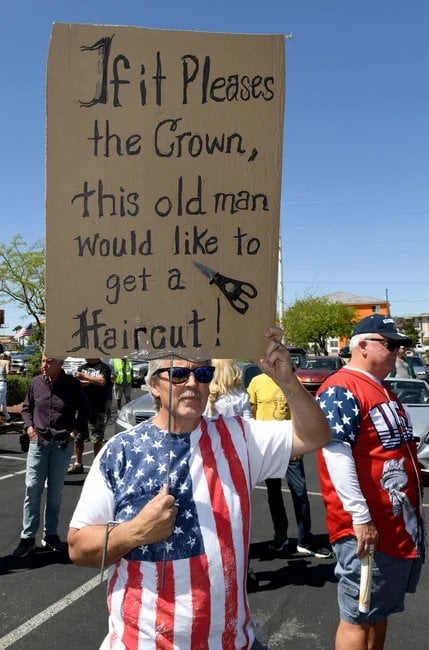 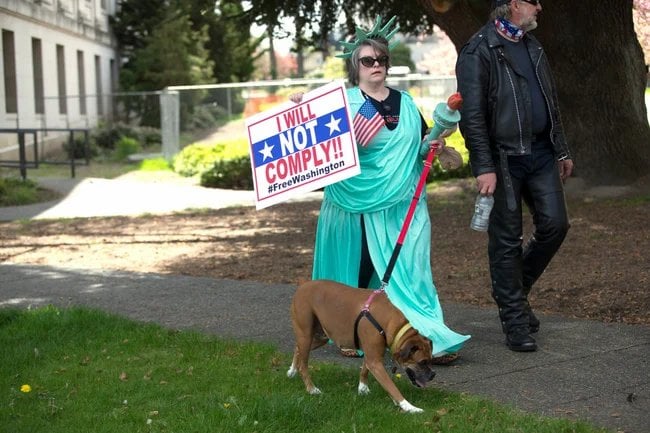 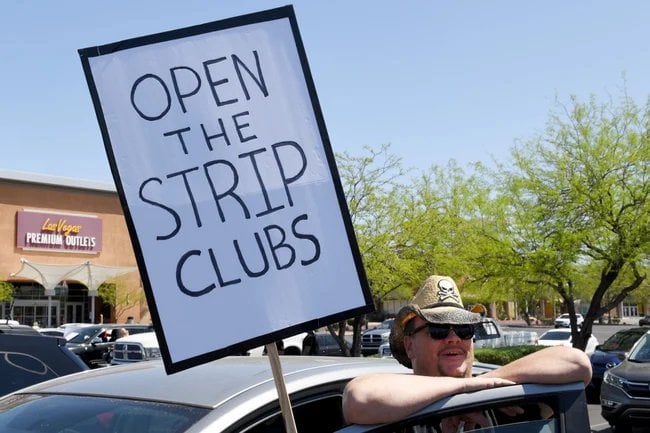 "I'm the one who brought back football!" he says. Apparently this is very important information.

Mr Fox News Moderator Man inquires about Trump's taxes - asking whether he paid $750 in taxes in 2016 and 2017, as reported by the New York Times - and Trump says he paid millions, but then also talks about how all businessmen "unless they're stupid" look through tax law to find... loop holes?

Biden says Trump is the worst president the US has ever had.

THIS IS SO PETTY AND NOT GOOD FOR ANYONE.

They talk about tax cuts and the economy and look, I won't lie, I need a bathroom break.

I'M BACK and it appears I've missed nothing except 20 additional insults.

Trump asks why Biden didn't change tax laws under the Obama administration, and Biden says because Trump created these laws.

Trump says companies will leave America if they have to pay tax. Snaps for capitalism. <3

Trump keeps talking about Biden's son and the moderator yells at him like a kindergarten teacher because seriously, man, just shhh.

Biden calls Trump "this clown" but then says, "excuse me, this... person". This really tickles me for reasons I cannot explain.

Biden looks down the camera again: "This is not about my family or his family, this is about your family - the American people," Biden said.

"He doesn't want to talk about what you need. You, the American people, it's about you."

More of that energy please.

HAHAHA okay nope, that didn't last long. Now Mr Fox News Moderator Man is explaining to Trump how the debate is designed to give them equal opportunity to talk so please, for the love of God, STOP INTERRUPTING..

Mr Fox News Moderator Man is just like, well m8, he's not actually the one doing it. 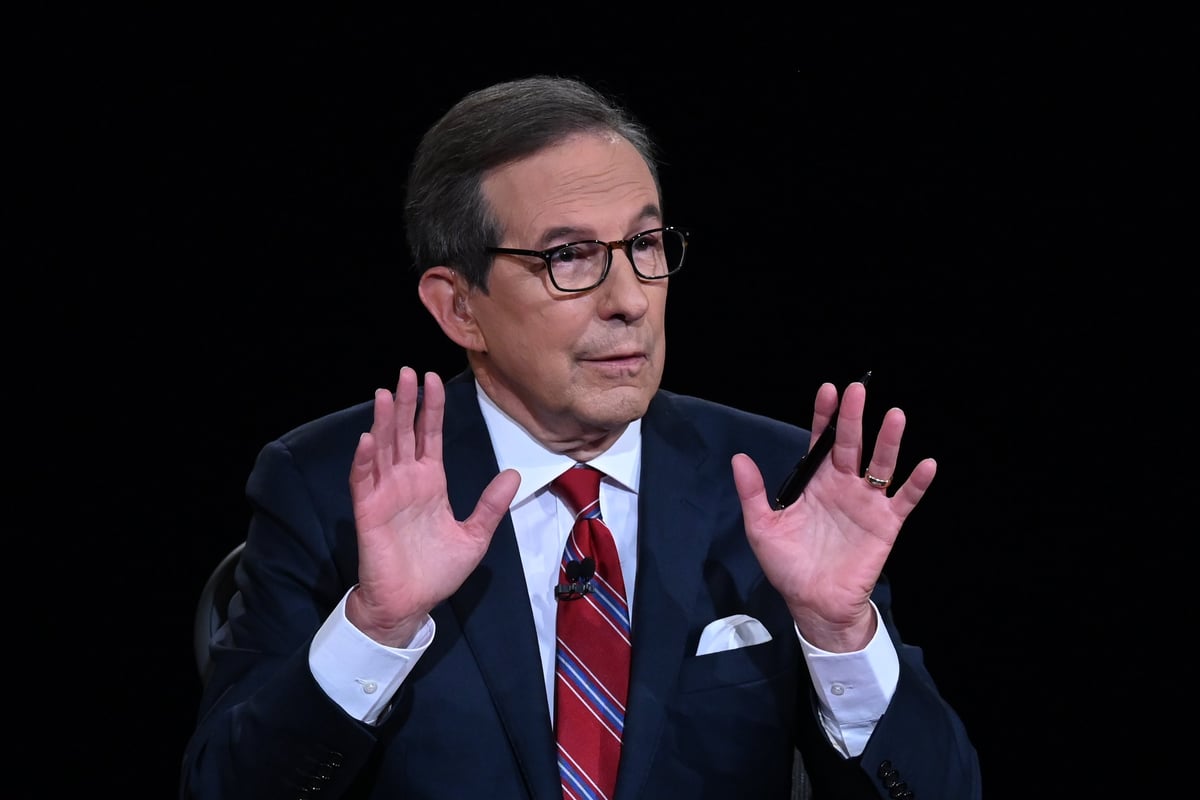 We've got precisely nowhere on tax, but we simply must move on.

It's time to talk about race, and right off the bat we're reminded of that time Trump called white supremacists "very fine people".

Trump says murders in suburbs are the fault of the "radical left," despite also happening under Republican state governments and Biden says crime in suburbs are due to systemic issues including poverty, uncertainty due to COVID and natural disasters like flooding and fires.

The moderator asks if Trump is willing to condemn white supremacists and right-wing groups flaming tensions at protests and Black Lives Matter rallies.

"I'm willing to do that but I would say almost everything I see is from the left wing, not the right wing," he begins.

Then he... LITERALLY DOES NOT CONDEMN WHITE SUPREMICISTS.

Look, it's here I have to be honest.

We wanted to do a funny recap of the first presidential debate, because we knew Trump would say some silly things and sometimes you have to laugh instead of cry. But at this point, any sense of humour I had from watching the debate was gone. This whole thing is just desperately sad.

Mr Fox News Moderator Man allows Trump another opportunity to... say Nazis are bad and again, he doesn't take it. 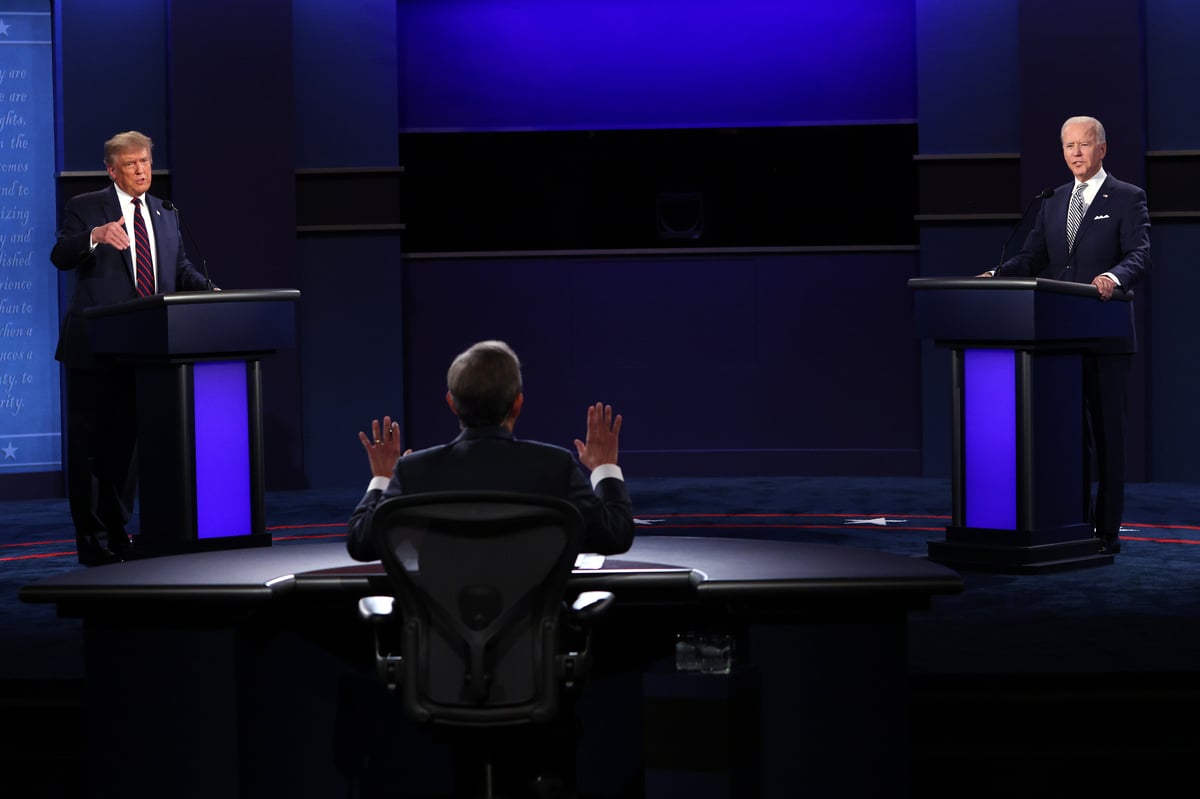 I'm tired and Mr Fox News Moderator Man is going to need a lot of lemon and honey drinks to save his voice after all the yelling he's had to do to stop the literal President of the United States from creating chaos.

They talk about their records, but mostly, Trump... yells. Biden semi-yells.

This could not be more predictable.

They move on to climate change and at this point, I'm deflated.

...Okay? So does he believe humans are contributing to climate change?

To a degree, Trump says. Punny.

Biden says he plans to invest in renewable energy and green infrastructure and sign the US back up to the Paris Accord.

GOOD LORD WE'VE MADE IT TO THE FINAL SEGMENT.

The final topic is election integrity, which feels like a strange topic for a country which considers itself the world's most impressive democracy.

Biden claims mail-in ballots and other forms of voting are all valid, and Trump says something about "crooked Hillary Clinton".

Anyone still going on their bingo?

Trump repeats his claim that mail-in ballots will cause election fraud despite experts and voting leaders in both major parties and national security officials considering it a safe and effective way to vote.

Mr Fox News Moderator Man comes through with his final question: Will each nominee commit to a peaceful transition of power and refrain from declaring victory until results had been independently certified?

Mr Fox News Moderator Man looks defeated. He's over it, and he wraps things up.

He says there's a second debate in two weeks and I have just made a note in my calendar to... be away... that day. Sick. Unwell. Not... present.

There's no... formal goodbye, because COVID, but also because of the visceral hatred in the room.

Eight in 10 voters who watched tonight called the tone of the debate negative. pic.twitter.com/zvFnn5QmZy

AND THAT WAS AWFUL.

AND I AM NOT SURPRISED IN THE SLIGHTEST.

Reply
Upvote
Honestly if anything Biden lost a big opportunity here. Definitely not a Trump supporter but I have to say Trump came out looking stronger then he should have.
He should have been called on his BS a lot more than he was. To those that were leaning towards him or already supporters not calling ou the BS will be seen as confirming it
C
cat 2 years ago

Reply
Upvote
1 upvotes
@feast polls are showing the opposite- undecided or slightly-trump-leaning voters were definitely turned off by his performance.
F
feast 2 years ago

Reply
Upvote
1 upvotes
Not even going to try and write a balanced article?
L
laura__palmer 2 years ago

Reply
Upvote
4 upvotes
@snorks This is obviously an opinion piece written for comedic purposes. It doesn't have to be balanced. You should write a balanced one, if you think this event warrants such treatment. I think it sums up the absolute farce this debate was. Biden is weak and Trump is unhinged.

Reply
Upvote
@laura__palmer No doubt the debate was a farce, but is propaganda the right way to get that across?
L
laura__palmer 2 years ago

Reply
Upvote
2 upvotes
@snorks This is not propaganda. It's a lighthearted opinion piece that is biased in favour of Biden, slightly. I find your hyperbole amusing.
S
snorks 2 years ago