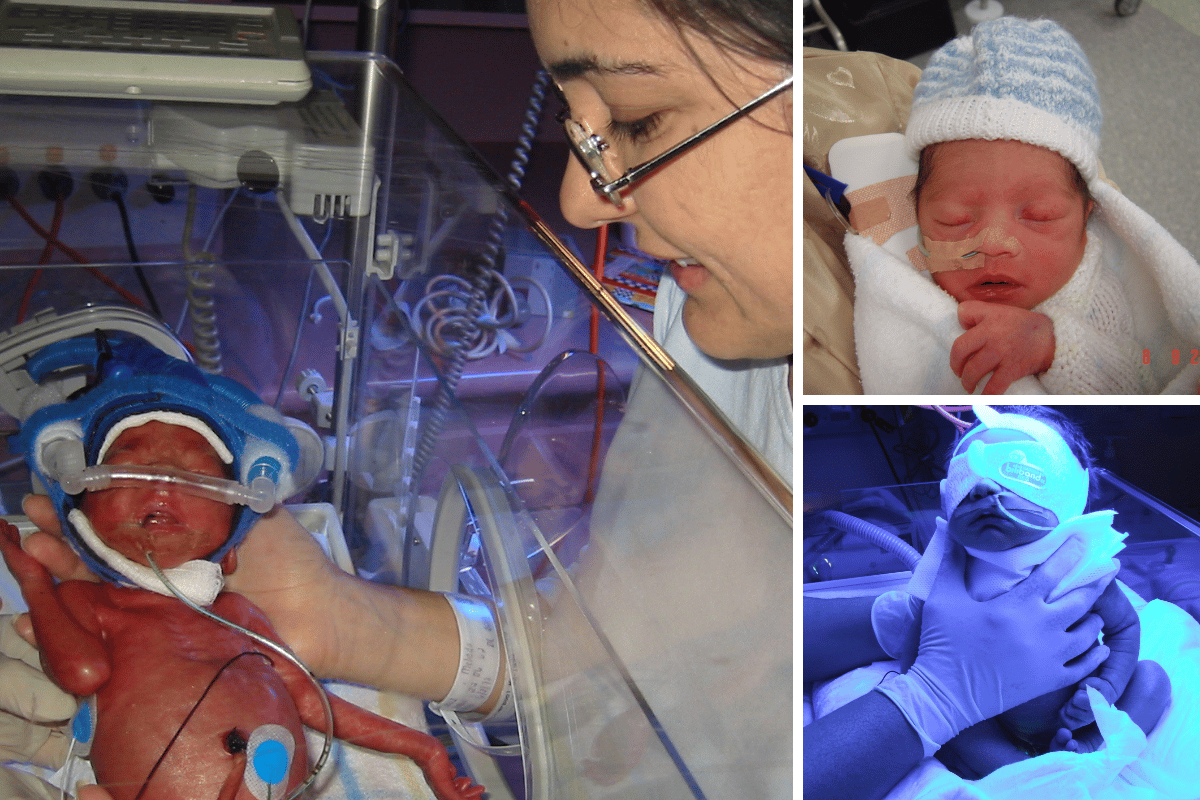 A few fleeting moments were all Melinda Cruz first had to see her baby right after she gave birth.

"It wasn't like in the movies when someone says 'congratulations' and they hold him up and say it's a boy... there was no moment like that," the now 44-year-old told Mamamia for World Prematurity Day.

Instead, Melinda only had a brief chance to ask doctors if her baby was ok before he was rushed to the Newborn Intensive Care Unit (NICU).

"It was just really scary... I got a quick look at him and then he was gone."

"I remember the doctor was stitching me up [afterwards] and I looked at him and said... 'That was a boy wasn't it?'"

Watch: Questions about childbirth (answered by mums and non-mums). Post continues below.

Two weeks earlier, Melinda had rushed to hospital when her waters started to break at home while 32 weeks pregnant.

"I was just sitting on the lounge watching a comedy and I started laughing. I thought I'd peed my pants after laughing too much. And then I realised... it didn't stop."

"I went to the bathroom and sure enough my waters had broken. I was just sitting on the toilet crying... I didn't want him to come so early because I knew he would struggle."

At the time, in 2002, Melinda was well aware she may encounter risks during her pregnancy. At 18, her doctor advised her to have kids earlier rather later on account of her bicornuate uterus, endometriosis and polycystic ovaries.

"The doctor gave me three scenarios, either I would find it really hard to fall pregnant, I would fall pregnant and not hold it... or I would have them early."

Thankfully, her son, Elijah, was born healthy, despite his early arrival and temporary reflux issues. He was one of the more than 27,000 babies born premature each year in Australia. 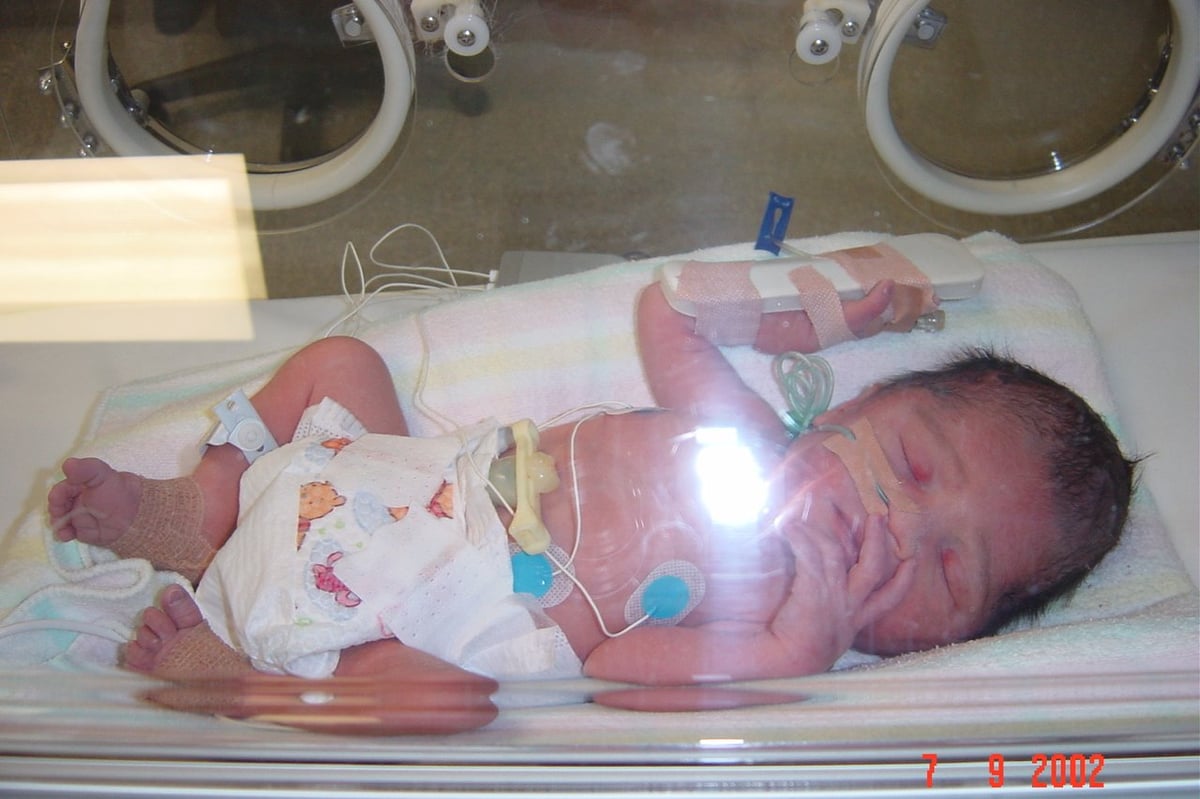 Elijah in the NICU after he was born at 34 weeks. Image: Supplied.

As a first time mum, Melinda says seeing her 2.015kg son lying in the NICU was "really scary".

"He was in a box with lots of tubes on him and he was really still. It was a really surreal moment when you walk in there and you can't touch them, and you can't hold them. I think there's that moment you're in shock and you're just trying to absorb it all."

Like other mothers of premature babies, Melinda said she was overcome with a feeling of "immense guilt".

"You just have so much guilt. I thought had I been different, had I not had a messed up uterus, [my baby] wouldn't be in this situation. And I used to feel guilty to Chris [her ex-husband] as well, because he's watching our baby on life support. So had he been with somebody else, he wouldn't be watching his baby do that," she shared.

"I also remember our family came to visit and just how hard it felt to have a room full of people and not have a baby to show them. I was actually apologising to them."

After giving birth, Melinda got to hold her son for the first time later that day. While she still remembers how "amazing" it was to finally have him in her arms, it wasn't the feeling she expected.

"It was one of those moments where you know you're their mother but you don't feel like their mother because you have to ask permission, 'Can I hold him? Can I put my hand in there?'"

Another moment she never imagined was having to walk out of the hospital without her baby in her hands.

"I never thought I'd go home without my baby... So it was a real shock to me. I remember hyperventilating, I just did not want to leave him behind. And they [the hospital staff] basically said to me, 'Well you have to go, we need the bed. You're fine, so you can't stay.'"

Listen to This Glorious Mess, where hosts Leigh Campbell and Tegan Natoli speak to a mum about her experience with premature babies. Post continues below.

Unfortunately, this wasn't the only time Melinda would leave the hospital with a baby in the NICU. Over the next four years, she would give birth to two more sons prematurely.

Her second son, Dillon, was born so early that Melinda and her ex-husband, Chris, feared they might lose him.

This time, Melinda was only 27 weeks pregnant when she was lying in a hospital bed about to give birth.

"I was in so much pain... I remember grabbing Chris' shirt at one stage in the hospital and said make them [the doctors] help me. I thought I was gonna die."

"The room was so quiet. I just had this immense relief of the pain going and I remember putting my head back on the bed and closing my eyes. It was just complete silence."

Unbeknownst to Melinda at the time, Dillon was being resuscitated. He was later taken to the NICU and eventually found to have lung issues and a small brain bleed.

Later that day, a doctor had a difficult conversation with Melinda and Chris.

"Chris and I were sitting there in silence and the doctor came in wearing his scrubs. I just had this feeling like this is what happens in the movies when they tell you that someone's died. But before he sat down, he said, 'I just want to let you know for now he's ok, we've got him.'"

The doctor continued to tell them that their son needed to make the first 24 hours.

"I have very little memory of those first 24 hours... It was just a shocking haze."

The following day, just before 2am, Melinda woke up in her hospital bed in a "panic".

"I think my body just knew," she said, as she recalled making her way to the NICU.

Dillon had pulled through his first 24 hours.

"Then it was taking every step at a time after that," she explained. 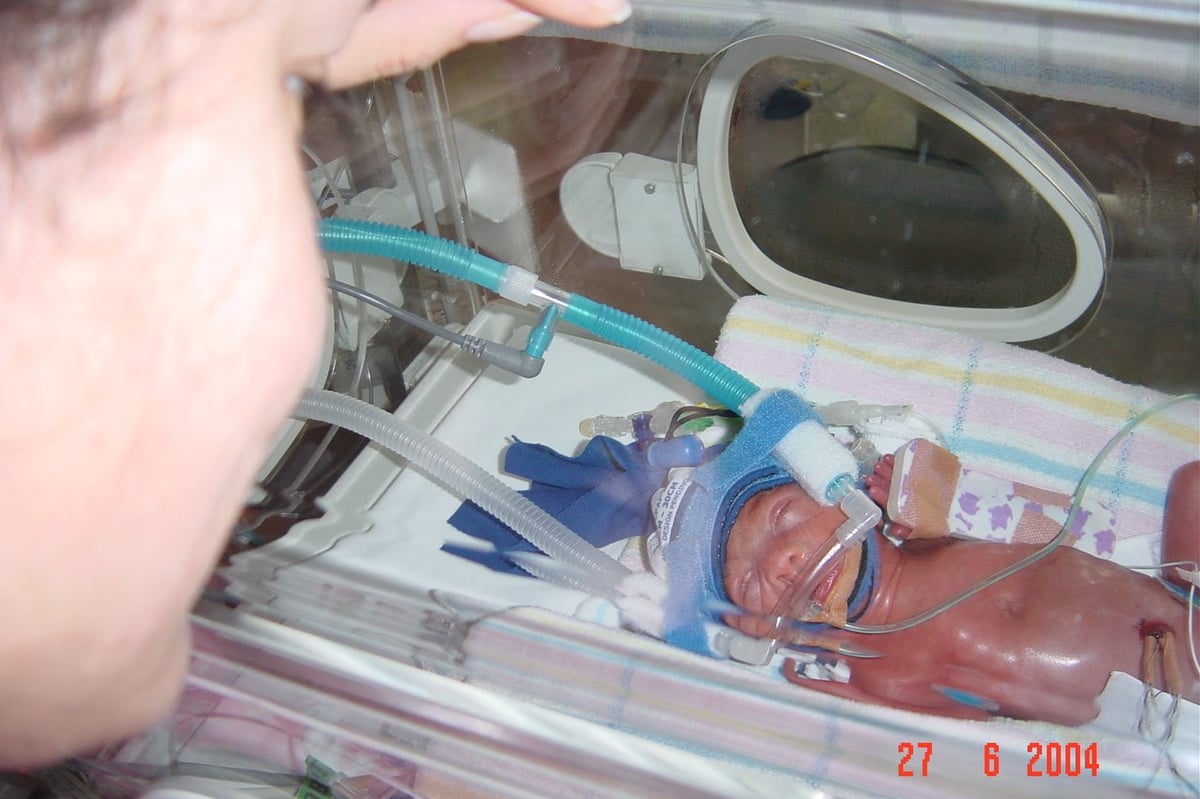 Dillon in the NICU after he was born at 27 weeks. Image: Supplied. Before she knew it, Melinda had to once again leave the hospital without a baby in her arms. And this time wasn't any easier.

"I remember just collapsing [at my parents' house] and being inconsolable. My mum said to me, 'you knew you were going to have to leave.' And I said, 'Yes, but you don't understand I've done it twice. Twice I've done this to a baby. Twice I've had to leave them behind.' It's an awful, awful feeling."

In those difficult times, Melinda said she held onto any small moments of "normal" she could find.

One was when Dillon could finally wear a little gown rather than just a nappy in the NICU.

Fortunately, Dillon was able to come home after spending nine and a half weeks in the NICU.

Her third son, Jasper, also spent time in the NICU after being born at 37 weeks.

"The difference with him was that it was my first time I've actually delivered a baby that I was able to put on my belly."

It was also the first time she could bring a newborn home.

Unfortunately, after taking Jasper home, she later discovered that his bilirubin levels were too high, and he needed to go back to hospital.

"It was pretty dangerous, but we got it just in time and he ended up spending three days under the lights in the NICU." 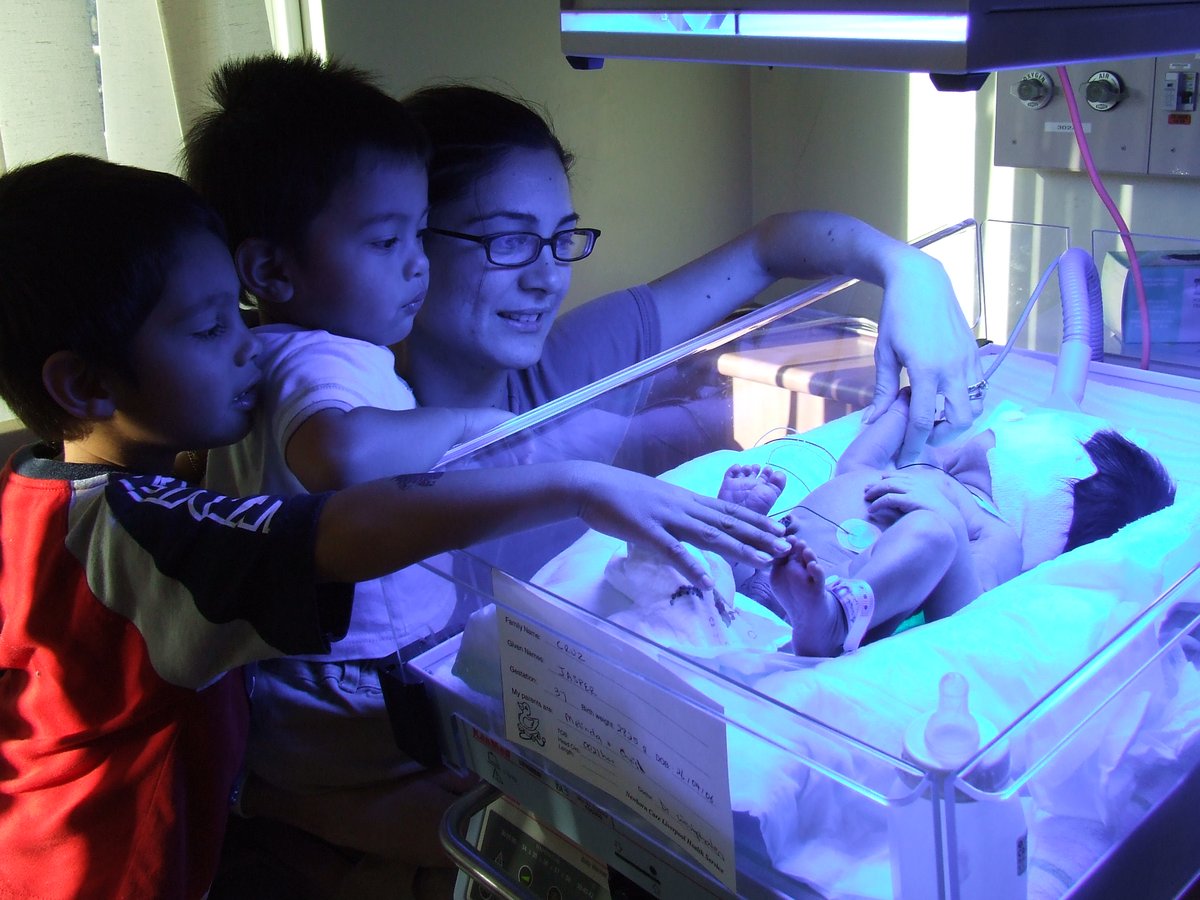 Jasper under the lights after he was born at 37 weeks. Image: Supplied.

Recalling the moment she could finally bring her sons home from hospital, Melinda said it felt like "100 emotions wrapped up into one".

"You've got relief, you're so happy, you're so in love with this baby. But at the same time, you're really anxious, and it's scary."

One reason behind the fear is the limited support after you leave the hospital, says Melinda.

"You're so used to the hospital environment and used to having people around you to help you and now you're on your own. And there's a lot that you don't know."

"You also didn't have a lot of contact at the time with other families in the NICU. So it was a very lonely, isolating experience."

It was this reason that she decided to found the Miracle Babies Foundation in 2005 - to help families receive the support she didn't have with her first son.

Together with the help of Liverpool Hospital's NICU and a group of mothers, Melinda helped launch a 24 hour family support line and a discharge programme to support parents for up to six years aft they give birth, as well as other initiatives.

"I'm so proud of the work that we've done with the foundation to open the doors and really change the parents' experience through it. And to be able to help them because there's so much unknown, so much fear and doing it alone is tough, even though you have a lot of people around you. For those who haven't been there before, it's tough."

With her sons now aged 19, 17 and 15, Melinda says she would go back and tell herself to worry less.

"I wish I knew at the time that everything was going to be ok. I look back now particularly with Dillon and I think a scary as what we went through, I know that if I hadn't gone through what we did, Miracle Babies wouldn't exist." 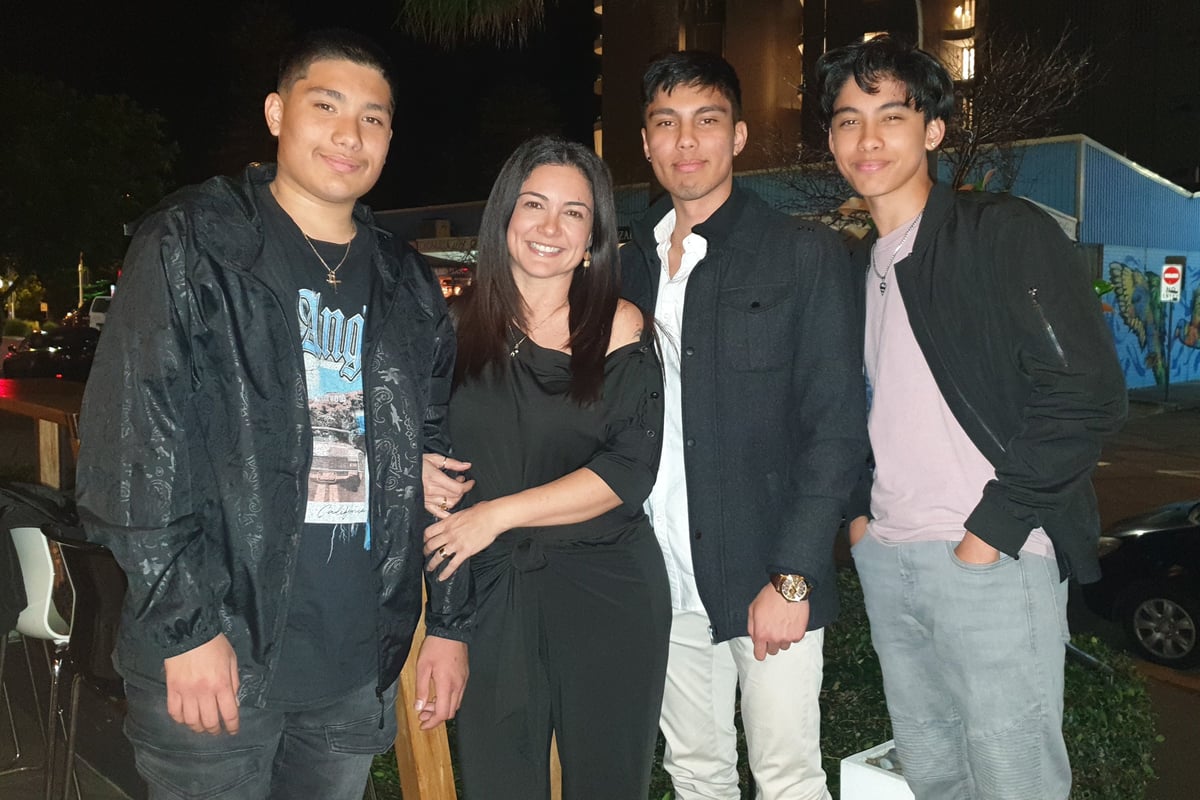 With that in mind, her advice to other mums is to just "be really kind to yourself".

"It's definitely a really difficult time, no one expects to go through it," she says.

"My advice would be to be kind to yourself and also reach out. The fact that there are organisations like us that exists now.... you can have access to so much information. You don't have to go through it alone."

You can find out more about Miracle Babies Foundation here.