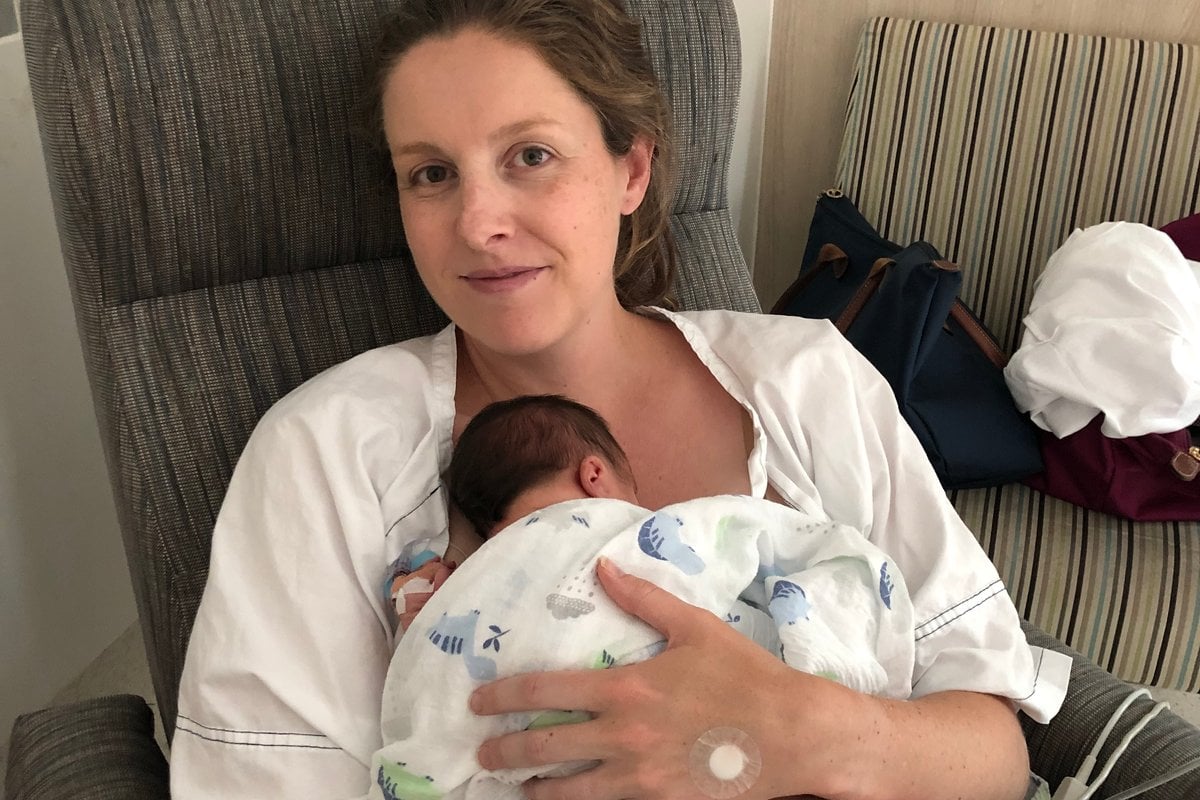 Eighteen months after the birth of her daughter Frankie, Kate Brow still finds that a certain smell or sound can take her straight back to that traumatic time.

“Every time I smell bushfire smoke I get really triggered,” Brow tells Mamamia.

“Every time I hear ambulance sirens I get triggered. I think I’ve processed it much better through telling my story and sharing my story but I still find these sensory things quite triggering.”

Even before Frankie was born, Brow had been through a lot. She had a “really wonderful” experience with the birth of her first daughter, Harriette, but that was followed by a difficult 12 months.

“She was a terrible breastfeeder,” Brow remembers. “I felt like I was failing the whole time.”

Brow told her GP how she was feeling.

“She said to me, ‘You don’t even have depression. You’ve just got a really difficult baby.’”

After the first year, things improved. Brow and her husband John started to think about having another baby and she fell pregnant again. But this pregnancy felt different.

“I had quite bad cramping,” Brow says. “I just felt funny about it.”

At eight or nine weeks, Brow suffered a miscarriage.

“I think I spent a full week on the couch with the worst headaches I’ve ever had. It was quite traumatic. I didn’t really want to tell work, so it felt like I was shouldering it all by myself. But I was also trying to wrap it up into, ‘Well, it mustn’t have been the right timing and there must have been something wrong, so it’s okay.’ All those kinds of clichés.”

A few months later, Brow fell pregnant again. Halfway through the pregnancy, worried that she hadn’t dealt with her miscarriage very well, she started seeing a counsellor through her workplace.

“She was making it okay for me to feel the loss of the baby,” she explains.

Brow and her family live on a farm two hours south of Canberra, and as she was in the last trimester of her pregnancy, bushfires threatened them from all directions.

“It was a really weird, scary time. Everything just felt like doomsday.”

The day after one really bad fire, when Brow was 35 weeks pregnant, she couldn’t feel her unborn baby moving anymore.

“I was on the bed, worrying, poking and prodding. Normally she’d just boot me back, and I was getting nothing.”

At that point, her daughter Harriette, who was nearly three, came into the room.

Brow called the hospital, 40 minutes away in Cooma, and they told her to come in. They found her baby’s heart rate was more than 170 beats per minute.

“So she was not moving but her heart was racing and they were pretty concerned about that. They said, ‘We’re just going to send you to Canberra for overnight observation.’”

Brow’s husband was sent home to pack a bag for her stay, but while he was gone, the word came through from the hospital in Canberra that she needed to get there as soon as possible.

"Then the ambulance came and the midwife from Cooma came with me. She was very supportive, but she was terrified. She thought she was going to be delivering the baby on the side of the road.

"I think we made it to Canberra in about 50 minutes and it’s normally an hour and 20 minutes. That was pretty crazy, with the sirens going the whole time. I thought, 'This is awful. What the hell is happening?'"

When the ambulance arrived in Canberra, Brow was rushed into the hospital.

"They raced me through the corridors, all the way up to the surgery."

The team tried really hard to wait for John but they also knew they had to get the baby out immediately.

Frankie was delivered by caesarean.

“She cried immediately, so that was reassuring. She was quite swollen and purple. They took her up to NICU [neonatal intensive care unit] to clear some fluid out of her lungs.”

Brow was in shock and “shaking like a leaf”. Not able to walk, she was taken to see her baby.

“I couldn’t touch her, I could only see her, really vulnerable, and it broke my heart.” 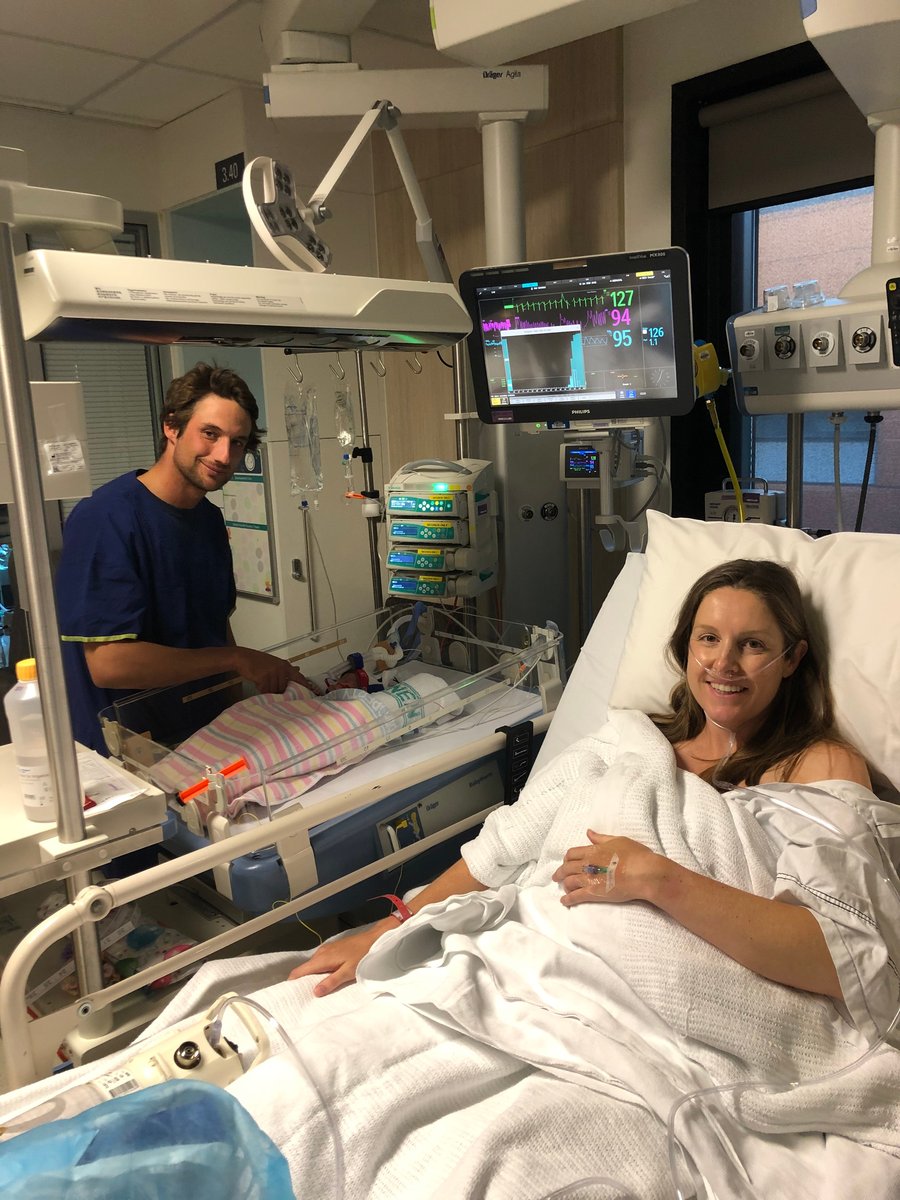 Two and a half weeks later, Brow and her husband brought Frankie home. They drove through the lingering smoke.

“Home isn’t actually feeling like a good place to be when you’ve got a five-week-prem baby and you can’t leave your house because there’s smoke everywhere.”

After having Frankie at home for three months, Brow started having trouble with breastfeeding again.

“Frankie loved the boob but only wanted to be on it for five minutes maximum and I had to walk around the house while I fed her otherwise she’d get distracted and pull off and she wouldn’t get back on. If anyone distracted us and she pulled off, I’d get really angry. I was just very stressed.”

Realising that she wasn’t coping very well, Brow went to her GP and asked to see a professional who specialised in perinatal depression - but she was told there was a three month long waiting list.

Fortunately, Brow remembered seeing something a local politician had posted on Facebook about the Gidget Foundation. She realised she could get the help she needed, for free – and it was available via telehealth.

“I could have my counselling sessions in my home while Frankie was asleep. That just allowed me to prioritise my mental health.” 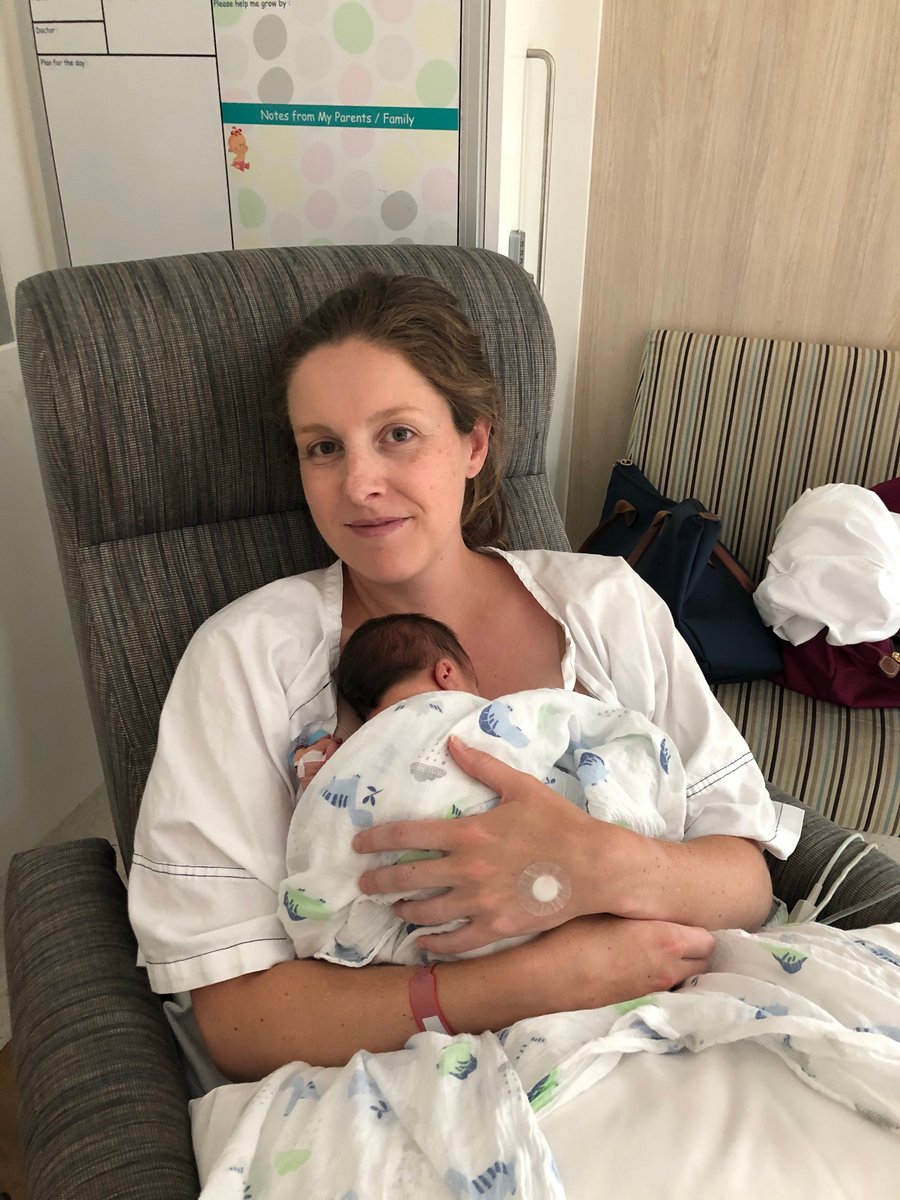 Brow says she was never diagnosed with postnatal depression but had quite a lot of anxiety.

“I wasn’t struggling to get out of bed, I wasn’t having suicidal thoughts or anything, I was just having a really tough time and I needed to talk to someone.

“With Harriette, I just barely survived that year, but this time I wanted to thrive and I wanted to be the best mum I could be. Being able to speak to someone and say, ‘It’s really hard and I’m getting really angry about her not going to sleep properly,’ or whatever it was, it just really helped me to frame things: ‘This is an okay feeling to have, it is difficult, you don’t have to do this alone.’”

For more information on the work of Gidget Foundation Australia, check out their website.

There are plenty of resources available to new parents via the Foundation, such as the Bunny Book series - a collection of special stories written for little people, with psychological strategies to help parents - which is available exclusively through Gidget Foundation's partner, Blooms The Chemist.