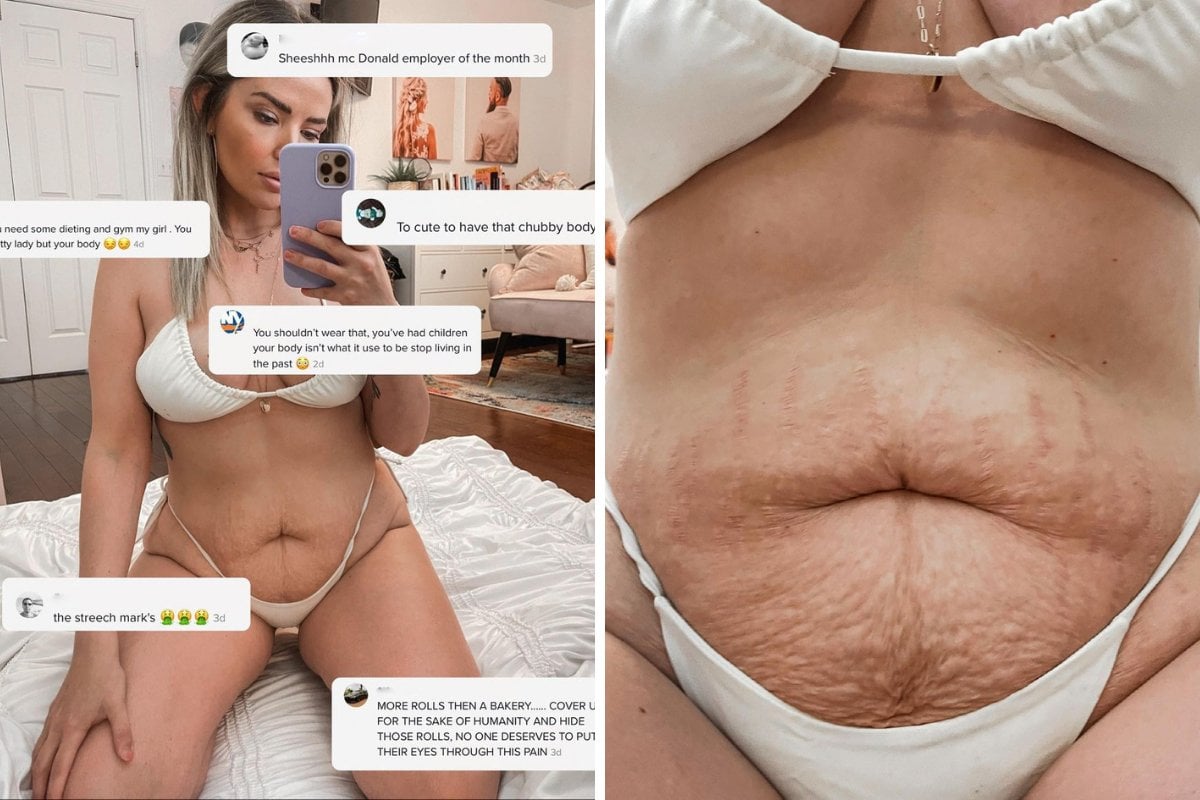 In today's disappointing news, the post-baby body continues to be a space up for debate.

Despite a rise in body positivity awareness, more candid and unfiltered sharing of the realities of the human body post-birth, and more open conversations around the unrealistic pressures for women to 'bounce back' after having babies - it seems that mums are still dealing with disgusting comments about their bodies.

And now thanks to a prominent influencer sharing her reality of fatphobic trolls, we can see that it's often men fuelling the fire over social media.

Watch: Laura Bryne articulates the contradiction of pressures that mothers face in their daily lives. Post continues after video.

Sarah Nicole Landry - better known as @thebirdspapaya on Instagram - posted three pictures of herself in a bikini.

One covered with comments written by men criticising her body.

One covered with comments written by women thanking her for sharing pictures of her body.

And one of her stomach, unfiltered and uncovered.

And with that single post, Sarah painted a realistic picture of what it's like for women to navigate social media: Basically impossible.

She explained that in sharing a picture of her in a bikini, three months after giving birth, she was called out by the 'haters' who told her she was lazy, that she had no self respect and that she needed a tummy tuck.

"McDonald's employee of the month," one said, while another chimed in, "More rolls than a bakery."

Beyond the hateful slurs, Sarah was given unsolicited 'advice'. That she needed to diet and head to the gym, that she "shouldn't wear that" and she should "cover up for the sake of humanity."

One troll even took it upon themselves to say that she should "stop living in the past" because her "body isn't what it used to be."

Psst! Have a listen to this episode of This Glorious Mess, Mamamia's parenting podcast. Post continues below.

On the flip side, Sarah received praise from female fans, who said "thank you for this" and that her post had given them the confidence they were desperately seeking. Her image made mums "feel better" about themselves, because they could see the reality of what a human body looks like after giving birth.

And that's why Sarah keeps posting these images. She's determined to share the reality.

"We have to show that this is completely normal for a body to transition to after children OR even without children," states Sarah.

While she admits that perhaps the easy way to escape trolls would be to cover up - or disappear completely - she's focused on steering the conversation in a completely different direction, away from the dark place it's currently stuck in.

"The conversation cannot be to just hide until you’re acceptable enough, and then show up," she shares.

"Either hide from the haters or show up for those who need it, myself included. Break it down and the choice is much more clear."

Sarah, who has nearly two million followers on Instagram, is clearly committing to her choice to show up for those who need it - continuing to share candid pictures of her body (and her life) as a new mum. And we're here for it.

Reply
Upvote
2 upvotes
F%#$in’’.ay! What an awesome effort. I wish I was that brave to put myself out there like that to help dismantle the patriarchy. Thank you 🙇 Inspirational 👏
M
mamamia-user-739637812 a year ago