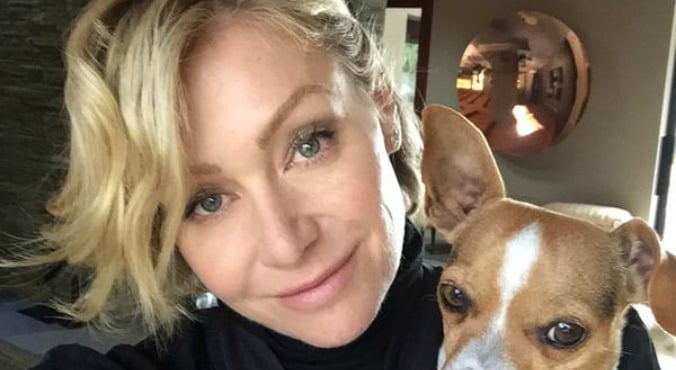 An unhealthy relationship with our body image can start at an early age – Kim Kardashian reportedly started crash dieting when she was just 13.

Unfortunately, it’s not rare. A study released this year found that 80 per cent of 10-year-old girls had been on a diet.

Now Portia de Rossi has spoken out about how dieting at the age of 12 led her to develop anorexia and bulimia as part of a documentary series called It Got Better. (Post continues after video.)

In the video, the 42-year old Scandal actress and wife of Ellen DeGeneres spoke about how dieting during her early modelling career caused almost 20 years of body image struggle.

“After my father died, I went to work as a model which it was horrible. Everything became about what I looked like, everything was hinged on it and I felt tremendous responsibility when I was 12 years-old and was put on the catwalk”.

In preparation for the runway show, de Rossi revealed she didn’t eat for over a week.

RELATED: Pink proves once again that she really doesn’t have time for body bullies

“My modelling agents had told me to go on a diet. So I didn’t eat for 10 days before then, and then I get up on this catwalk, and I’m a little kid, and I’m posing and trying to be sexy and strutting around, and all the other models are making fun of my bushy eyebrows,” she said.

“When I got in the car after I opened up a giant bag of my favourite candy and literally put my whole face in it. Then I think ‘Shit – what have I done? I just undid two weeks worth of dieting.'” (Post continues after gallery.)

That was the start of something more serious.

“I’m 12 years old. So then I vomit. I erase the feelings with food and erase the food with vomiting, but you’re still left with the shame,” she explains.

“It makes me emotional just thinking about that day… It was just horrible.”

RELATED: “Body-shaming in all forms is inexcusable”: Isabelle Cornish shuts down her critics

Clinical psychologist and director of Shape Your Mind, Dr Olivia Patrick says that eating disorders in young women is a growing problem.

“It’s becoming more and more common for primary school age children (and sometimes even younger) to be very concerned with their appearances, in particular a fear of being fat,” she explains.

According to the Butterfly Foundation, research has discovered that 75 per cent of high school girls feel “fat” and want to lose weight, while 90 per cent of girls aged 12 to 17 are on a diet.

De Rossi revealed her battle with an eating disorder followed her for many years after she moved to LA to pursue an acting career.

In an interview with Oprah Winfrey, she admitted she lived on just 300 calories a days, would take up to 20 laxatives a day and hid it from her Ally McBeal castmates and friends

"When I was 26, my eating disorder had gotten to a point where I felt physically exhausted and I was just 38 kilograms at the time," she says in the video.

"I then got a general fitness assessment and it came back positive for lupus and all sorts of ailments. That was the start of my very long recovery."

In an interview with the Daily Mail, the Aussie actress credited her love for wife Ellen DeGeneres for having "saved her". The pair met in 2004 and married in 2006.

The 42 year-old also spoke about coming to terms with her sexuality and didn't publicly come out until 2005 for fear it would affect her career.

She shared some inspiring advice for anyone in a similar situation, encouraging everyone to embrace individuality and accept uniqueness.

"There is no way to be normal, there is no normal. You just need to know that who you are is enough. It is always be enough - it's more than enough," she said.

If you or a loved one needs assistance or support with body image or an eating disorder, contact The Butterfly Foundation National Eating Disorders Supportline on 1800 33 4673 (1800 ED HOPE).