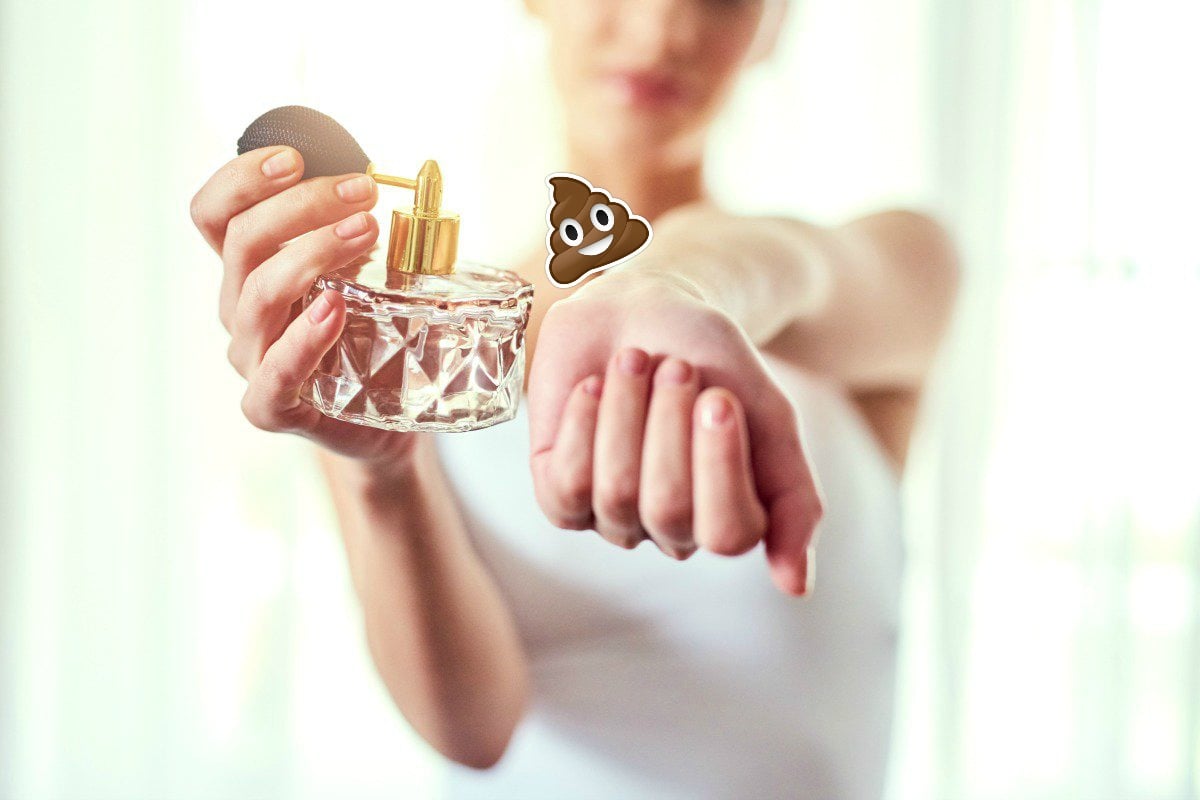 Newsflash: there is poo in some of your favourite perfumes.

Well, not literally – that’s probably illegal – but a naturally occurring chemical that can smell both floral and faecal. And the freakiest thing? The poo scent is supposed to make your fragrance smell better.

Indole is the organically occurring compound found in white flowers such as jasmine, gardenia and orange blossom. The oils of these flowers are the powerhouse scents behind many a famous fragrance, and a mere whiff of a white floral can immediately conjure up memories of sultry summer nights.

And yet, indole is also found in some damn stinky things like coal tar and, yes, poo. As with many of nature’s gifts, indole can also be replicated synthetically in a chemist’s lab.

According to HMDB (Human Metabolome Database), which is like IMDB for chemicals, indole “occurs naturally in human feces and has an intense fecal smell. At very low concentrations, however, it has a flowery smell, and is a constituent of many flower scents (such as orange blossoms) and perfumes.”

They send you witty texts, and they seem to really care about you. Yet when you meet them IRL, after an hour too long in their company you realise that they have the charm of a turd and probably had their copywriter friend concoct those texts. Indole! Such a trickster!

The presence of indole in a fragrance, whether from a white floral or a synthetic compound, can lend the fragrance a human, sexual edge.

Alienor Massenet, a perfumer who has created fragrances for luxury brands such as Chloe, Giorgio Armani and John Galliano, describes indole as “a very powerful molecule, both in masculine and feminine fragrances… it’s very animalic.” And we all know what “animalic” means: SEX!

Unfortunately for me, I discovered the existence of indole not in a science lab, but from enthusiastically applying a fragrance and then learning much later on that I smelt like poo.

I’d been on the hunt for an everyday fragrance that was floral but also a little bit sexy and exotic. My previous go-to was Euphoria by Calvin Klein, but I was after something different this time; something a little less youthful, and preferably with more natural ingredients.

After an afternoon of spritzing fragrances, I thought I’d found The One. It had a strong, sensual jasmine scent, which would be perfect for these warmer months. The fact that it was affordable meant that I quickly bought it without taking the time to truly experience the fragrance.

I got home and sprayed it all over myself. And then something went wrong.

What kind of perfume sprayer are you? Post continues are video…

The perfume did smell good, but I could tell that it was really overpowering. And it started to smell kind of… bad. I couldn’t put my finger on it. I kept smelling my wrist, and I couldn’t figure it out. I could smell jasmine (good), but I just had this suspicion that there was something majorly stinky about me, and I didn’t know what it was.

Not only was the fragrance strong, it also lasted forever. Several hours after that first spritz, I could still smell it while I was just sitting at my desk. And the perfume just didn’t smell as deliciously floral as it had in the shop. Instead, it was pungent and suffocating.

That day, my husband was getting his car repaired, so I had to pick him up in my car. When he got into the car, I asked him what he thought of my scent. “You’re wearing a lot of perfume,” he said, “It’s like something a teenager would do.” What did that mean?! I guessed that it wasn’t good.

Like the Sherlock Holmes of scent, I jumped onto the perfume geek’s forum, Fragrantica.com, to see what my fellow geeks had said about this strangely stinky fragrance.

Most of the reviews used words like “dirty” and “sexy”. But there was one word that caught my attention: “indolic”.

For many of the reviewers, the indolic nature of this fragrance was what caused it to be so offensive.

I thought I was across all perfume jargon – heck, I even used to be a perfume spritzer in Sydney – but I’d never heard of the word “indole”.

A quick Google search later, and I knew way more than I wanted to. “Concentrated indole smells like poop. Because it’s actually found in poop,” I panic-read on Gizmodo.

What’s more, jasmine contains a butt-load of indole – a whopping 2.5 per cent, according to HMDB. I scrubbed my skin hard that night.

I’m still searching for the perfect, jasmine-y fragrance to wear. But this time, I’ll try the fragrance and wear it for a day before buying it.

I think I’ll also splurge on a high-end fragrance, because I have a theory that the more money you spend on a perfume, the less likely it’ll smell like a dirty nappy. On my list to spritz are Jasmine Noir by Bulgari, Ikat Jasmine by Aerin (Estee Lauder) and Alien by Mugler.

I did eventually find the perfect use for my cheap jasmine/poo perfume. I now use it as a toilet spray.

Surprisingly, when the jasmine scent mingles with the real smell of poo, it somehow cancels out the poo scent.

So if you ever accidentally purchase an indolic fragrance, now you know how to use it.

What a confused article - not sure what the point is.

Like us humans, perfume can be the bridge between the animal and the divine.
You're simply using far too much fragrance - don't forget your nose switches off to a fragrance after a few minutes (because it is only interested in CHANGING smells).
Good luck with the master perfumer versions of Jasmin - that's a great way to go. They know how to control the lift of their compositions.
And don't forget to wipe your butt daily to prevent a buildup of nasty indole.

This is just... what? It’s not poo, what the hell are you talking about? This is possibly the most ridiculous thing I’ve read here. Just because they both contain the same chemical, it doesn’t make them the same thing! This is like those clickbait articles about ‘the hidden ingredient in your bread that’s also used to make yoga mats and industrial cleaners!!1!’. SMH.

I was wondering why my bread was getting chewier

For me, I think the award for "most ridiculous thing I've read on Mamamia" still goes to that woman banging on about how great it was to not have furniture...but this comes pretty close.

I’d forgotten about that one!

It's the chicken feathers again.