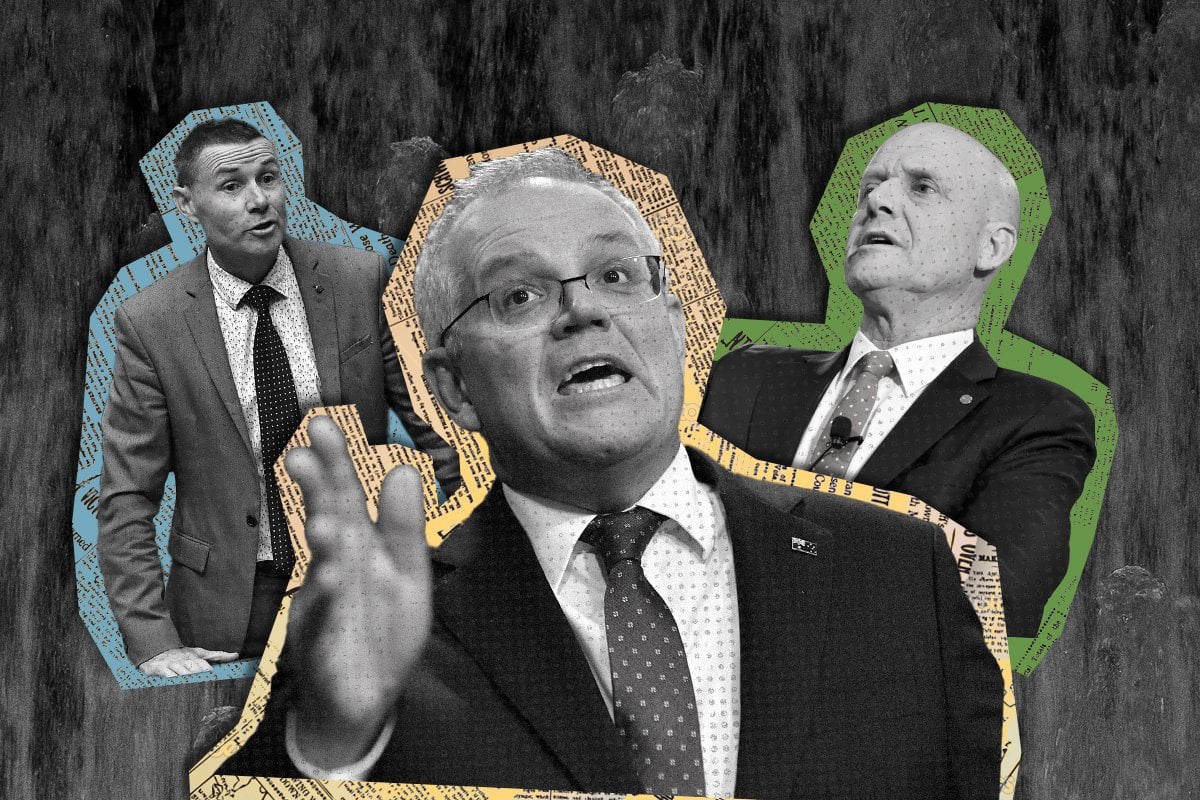 This is the headline we wish we could write on International Women’s Day: PM creates a policy that benefits women, without having to ask his wife. 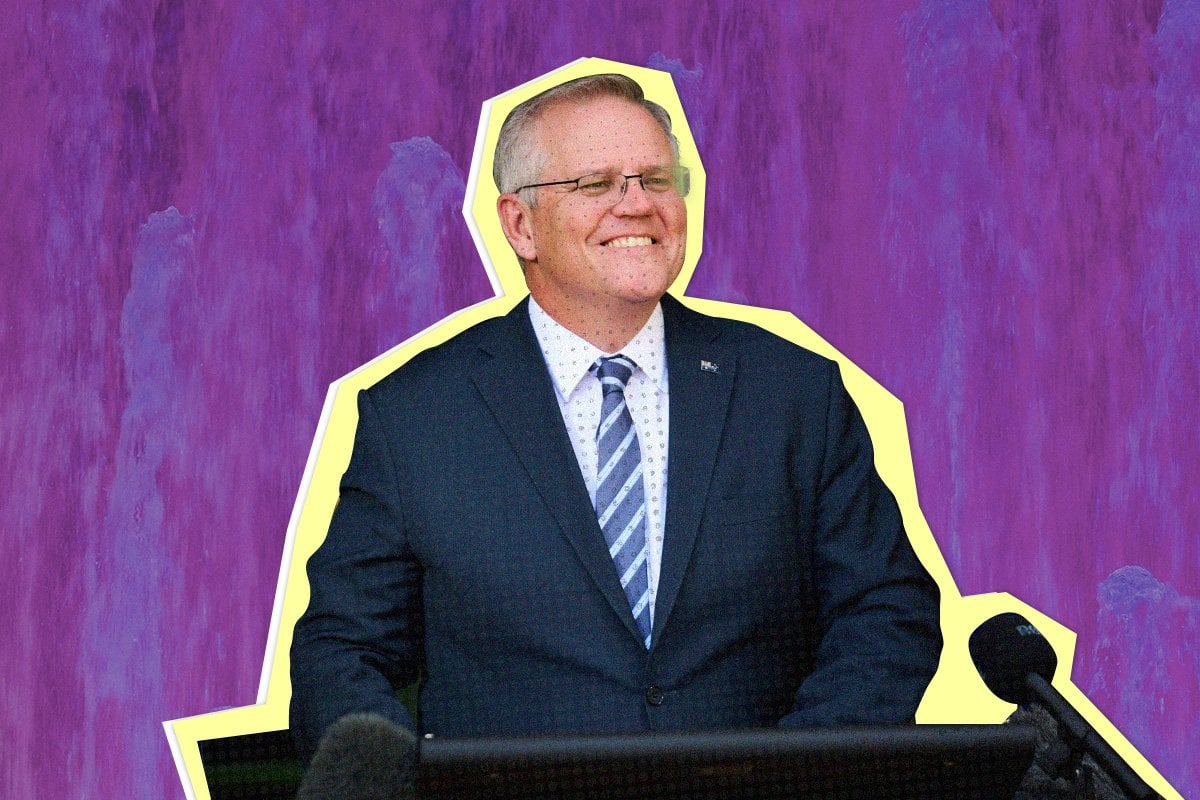 Our nation's leaders, including our Prime Minister, have shown us time and time again that there's a "women problem" in Australian politics.

A problem that sees "inappropriate behaviour" and "sexist comments" too often used in the same headline as "women".

Here we've rounded up just a few times our political leaders have said or done offensive things to women in recent years.

1. Scott Morrison's wife helped him understand sexual assault by asking him to think as a father.

Last year, Prime Minister Scott Morrison copped a wave of criticism when he shared that a comment from his wife, Jenny, helped him understand the seriousness of Brittany Higgins' rape allegation, by thinking how he, as a father, would want his daughters to be treated.

"Jenny and I spoke last night and she said to me, ‘You have to think about this as a father. What would you want to happen if it were our girls?’" he said.

"Jenny has a way of clarifying things. Always has. And so, I’ve reflected on that overnight and listened to Brittany and what she had to say."

A month later, child sexual abuse survivor, Grace Tame, summed up how many of us felt when she was asked about Morrison's comments at the National Press Club in March 2021.

Higgins also criticised the Prime Minister's comments in her National Press Club Speech in February, saying she never "wanted his sympathy as a father".

"What bothered me most about the whole 'imagine if it were our daughters' spiel wasn’t that he necessarily needed his wife’s advice to help contextualise my rape in a way that mattered to him personally. It’s all he could do — and that’s how he realised it was a bad thing," she said.

In November 2020, Scott Morrison made international headlines when he infamously interrupted cabinet minister Anne Ruston when she was asked about the treatment of women in government.

Standing next to the Prime Minister at a press conference, Ruston was asked by journalist, Phil Coorey, "As a woman in government, your reflections on the culture inside, has it got better, worse or no change since the 'bonk ban'?"

"Well, Phil, the only thing that I can..." Ruston began to respond.

But just eight words in, she was cut off.

Morrison interjected: "Sorry, how this ban is referred to I think is quite dismissive of the seriousness of the issue, Phil, and I would ask media to stop referring to it in that way.

"We took it very seriously and I think constantly referring to it in that way dismisses the seriousness of this issue, it’s a very serious issue. Thanks, Anne?"

Scott Morrison interrupted Social Services Minister Anne Ruston as she answered a question in a news conference about the workplace culture of parliament for women. pic.twitter.com/JuYoPYYbkc

3. Jacqui Lambie was 'growled at' in the Senate the same day the Jenkins report was handed down.

Last November, hours after Sex Discrimination Commissioner Kate Jenkins handed down a damning report about the treatment of women in Parliament, "dog noises" and "growling" could be heard when Tasmanian Senator Jacqui Lambie was speaking in the Senate.

"I don't think it's appropriate given what's been handed down today, to have growling and dog noises coming from this side of the chamber, while a female member in this place is on her feet. It happened. I don't know who is responsible for it, but it's inappropriate," Greens Senator Sarah Hanson-Young responded.

"If we are going to change culture from the top, that means all of us," she added.

in the Senate, Sarah Hanson-Young accuses someone on the Coalition benches of making "growling and dog noises" as Jacqui Lambie spoke

Penny Wong says she heard it from "that end" too but Senate President Slade Brockman said he didn't pic.twitter.com/qbnMZ3yw1y

Labor's Penny Wong backed her up. "I would ask one of the senators at that end perhaps to do the right thing and withdraw," she suggested. "At least fess up."

Coalition Senator David Van later apologised for his behaviour in the Senate, but said he did not accept the "characterisation" of his interjections.

"I do regret the interjections now," he said. "I apologise to Senator Lambie into the Senate and reserve it was present, I commit to holding myself to the highest standards in the future."

Van also told news.com.au he "was just interjecting with a gruff voice".

"I think with the mask and everything, in all the noise that was going on, it was that.t was in no way an animal noise."

Two women in his electorate, Alix Russo and Sheena Hewlett, the wife of a local councillor, claimed the member for Bowman harassed them on social media.

Laming later apologised for any hurt his comments may have caused and undertook empathy training at the request of the Prime Minister. In October last year, he withdrew his apology, telling the House of Representatives it was "now obvious the accusations against me were fabricated".

Queensland Liberal National MP Andrew Laming has formally withdrawn his apology to two women, citing a “fabrication” and “trial by media. The apology was issued following a demand from PMhttps://t.co/tIsWfs4A7w

That year, another two women also came forward, including Professor Gemma Carey, who said Laming made her feel uncomfortable when she was seated next to him on a domestic flight in 2015, and another woman, Megan Lewis, who said he persistently asked local female staff for their phone numbers while on an overseas delegation in the Philippines.

Laming is still currently the member for Bowman, a position he has held since 2004.

"I walked over to the senator and confronted him directly," Senator Hanson-Young told the Upper House.

"I asked whether I heard him correctly... He confirmed he had yelled, 'you should stop shagging men, Sarah'."

Leyonhjelm claimed he had made the comment in response to a remark by Hanson-Young along the lines of "all men are rapists".

However, it was later found that she never said those words.

The following year, Hanson-Young won a defamation case against Leyonhjelm for suggesting she was a misandrist and a hypocrite in Parliament and in media interviews in 2018.

In March last year, he lost his bid to overturn the ruling and the Greens Senator was awarded $120,000 in compensation, which she said she would donate to charities who support women at work.

"My victory over the former senator is an important decision for all women," Hanson-Young said in a statement last year when he lost his appeal bid.

"It sends a timely and critical message that women deserve to be safe and respected in our workplaces, in our schools and in our communities. It shows that speaking up and calling out abuse and harassment is important for holding perpetrators to account.

My victory over the former Senator is an important decision for all women. It sends a timely and critical message that women deserve to be safe and respected in our workplaces, in our schools and in our communities.

"It is hard and difficult to do, but by supporting the women who dare to speak up, we are supporting the rights of women and girls to be respected, everywhere."

Reply
Upvote
Morrison has absolutely NO IDEA. If only people would wake up to him, only there for own benefit and ego.
S
sansa cleever 2 months ago

Reply
Upvote
@mumma-cat So long as Shorten continues to be run and supported by the Labor party, Albanese has NO IDEA either.
M
mumma-cat 2 months ago

Reply
Upvote
@sansa cleever There's no comparison. The current government is the most corrupt we've ever seen.
S
sansa cleever 2 months ago