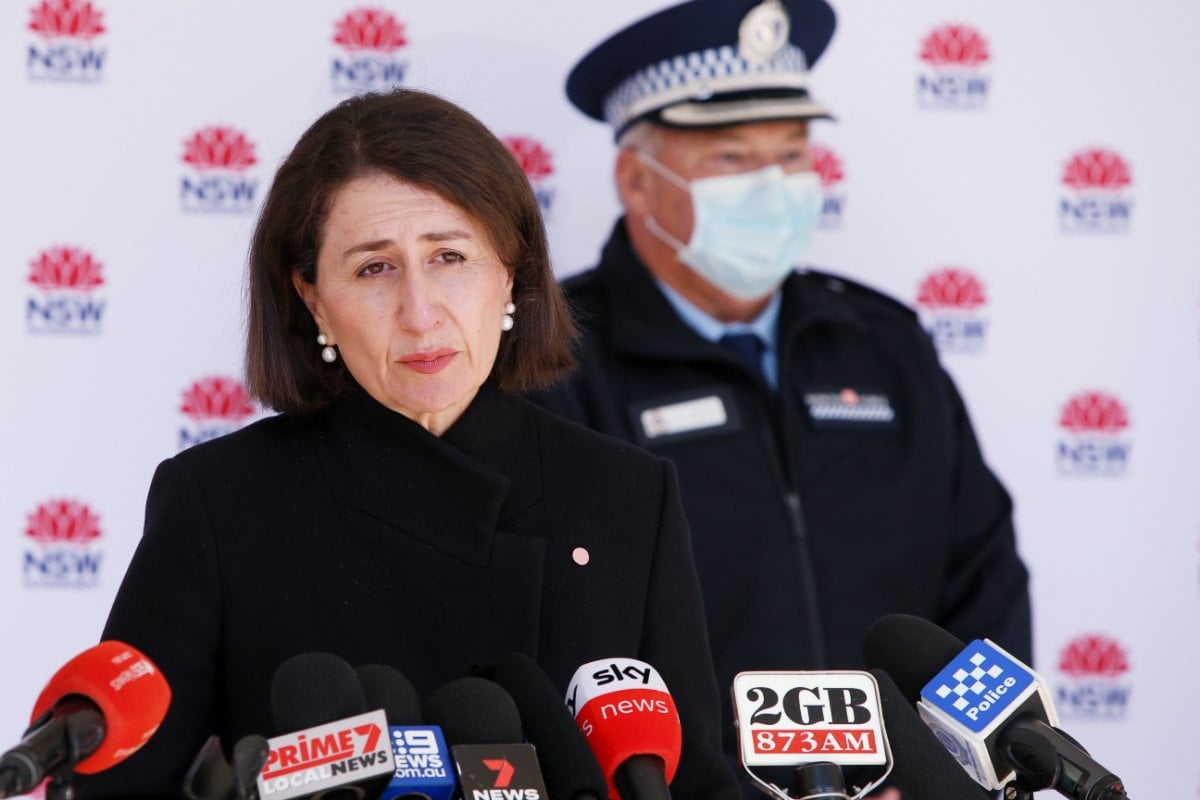 NSW has recorded 44 new cases of community transmission, 29 of which were either partially or fully exposed to the community. It's the highest number of NSW daily infections since the pandemic's first wave.

Premier Gladys Berejiklian has announced tighter restrictions for those areas of the state currently with stay at home orders, effective from 5pm on Friday:

Ten COVID-19 patients in the state are in intensive care with four ventilated, including someone in their 20s and another in their 30s.

At least 100 more officers began patrolling southwest Sydney from 7am on Friday as police launched a "high-visibility" operation to ensure compliance with public health orders.

"Our police will be targeting the people who think the rules don't apply to them," NSW Police Deputy Commissioner Mal Lanyon said.

"Those people are putting everyone's lives at risk, including their own families, and working to prolong the lockdown."

"It should be the same rules for everybody."

The heavy police operation starting today in Sydney's south-west has attracted criticism of racism over singling out the largely multicultural area for a COVID compliance crackdown. #9Today pic.twitter.com/DqsPQkEbXS

The crackdown comes after Premier Berejiklian hinted on Wednesday that the Canterbury-Bankstown, Fairfield and Liverpool local government areas could be singled out and subjected to stricter COVID-19 restrictions. Some are suggesting the police response is discriminatory, given the strong presence of multicultural communities in that part of Sydney.

"There is absolutely NO logic for the direct targeting of Sydney's black and brown communities," NSW Greens MP David Shoebridge tweeted on Thursday afternoon.

Small businesses and Australians with home loans who are struggling through COVID-19 lockdowns can count on their banks to help them, says the Australian Banking Association.

A new national support package will be available to all small businesses and home loan customers who are significantly impacted by current lockdowns or recovery from recent lockdowns, the peak body announced on Thursday evening.

Customers will be able to seek deferrals of their mortgage repayments on a month by month basis.

Small businesses with loans in good standing will be able to delay loan repayments by up to three months.

On Thursday, Scott Morrison also announced the scrapping of a $10,000 means test for the Federal Government’s lockdown payment scheme, but only if the lockdown extends beyond three weeks.

#BREAKING: More Sydney residents will be eligible for an emergency Covid-19 payment next week after a big announcement by the Prime Minister. https://t.co/epmzQsdj8u

The payment was announced during Melbourne's fourth lockdown, and when asked why this move was only being made now that Sydney is being affected, Morrison stated, "You've got to respond to the evidence and the evidence is: there'll be a need for further support, because this is going longer in Sydney than it went in Melbourne."

Australians under lockdown in NSW have been urged to get their second AstraZeneca dose within eight weeks of their first jab.

A 12-week gap between AstraZeneca jabs has been recommended as the most effective way to protect people.

But Prime Minister Scott Morrison wants people in the worst-affected areas who have received a first jab to make second dose appointments closer to eight weeks.

This was consistent with the advice of the national expert immunisation panel ATAGI, he said on Thursday.

But Nancy Baxter, the head of the University of Melbourne's school of population and global health, said 12 weeks remained the recommended AstraZeneca interval.

"We don't really know how effective it is at eight weeks," she told the ABC.

The death of a 61-year-old West Australian woman last month was likely linked to the AstraZeneca vaccine, the Therapeutic Goods Administration has confirmed.

The woman reportedly received the vaccine in early June and weeks later was admitted to Royal Perth Hospital, where she died.

The group concluded the woman's "very rare but fatal" case of immune thrombocytopenia (ITP) "was likely to be related to immunisation", the TGA said in its weekly COVID-19 vaccine safety report on Thursday.

The Therapeutic Goods Administration has confirmed the death of a 61-year-old WA woman who had received the AstraZeneca vaccine was “likely to be related to immunisation”. #wanews https://t.co/bYb6dQbQej

Because of the risk of extremely rare but serious blood clots, the AstraZeneca vaccine is only recommended for people over 60 in Australia.

However last week Prime Minister Scott Morrison encouraged people under 40 keen for the AstraZeneca vaccine to talk to their GP.

The government also offered legal protection to doctors who prescribe the vaccine to consenting younger people.

A COVID-19 outbreak that started in a central Australian mine continues to grow, with two new cases diagnosed in the Northern Territory.

Both workers from Newmont's Granites Mine, about 540km northwest of Alice Springs, have been in quarantine since the outbreak started on June 26.

They travelled on the flight from the mine to Darwin after they came into close contact with another worker who later tested positive, NT Health says.

"There is no risk to the community because the workers have been in Howard Springs during their infectious period," a spokesman said late Thursday.

Twenty people linked to the mine have become infected across Australia.

South Australia has scrapped COVID-19 border restrictions for Western Australia and the Northern Territory but NSW remains locked out as it continues to battle a Delta variant outbreak.

SA had imposed hard border closures for WA, NSW, the ACT, the NT and Queensland.

Updates have been made to the Cross Border Travel-Associated Direction in South Australia. The changes apply to travellers from Western Australia, Northern Territory and Queensland. For more information visit: https://t.co/2v2MIPJcT4 pic.twitter.com/vJXOjQCLmC

On Thursday, the Marshall government announced border bans will be removed for WA and the NT from Sunday for people travelling to SA.

SA reported one new virus case on Thursday - a man in his 20s who is in hotel quarantine.

There were 16 active infections at last count, all in isolation.

After 41 long years, Australia has another Wimbledon women's singles finalist to savour after Ash Barty produced the performance of her life to defeat former champion Angelique Kerber in the last four.

Living up to her world No.1 billing, the Queenslander reckoned she'd never played such a fine match after prevailing 6-3 7-6 (7-3) in what she had called her "ultimate test" on Thursday against the rejuvenated three-time grand slam winner on Centre Court.

A first Wimbledon final.@AshBarty, 50 years on since Evonne Goolagong Cawley won at The Championships, is one victory away from emulating her idol after beating Angelique Kerber 6-3, 7-6(3) 🇦🇺#Wimbledon pic.twitter.com/qgWxKoKYvI

In truth, that ultimate test is yet to come on Saturday when Barty will tackle Karolina Pliskova, the tall, big-serving Czech who blitzed 14 aces as she tamed Aryna Sabalenka 5-7 6-4 6-4 in the other power-packed semi-final.

Barty, the first Australian women's finalist since her idol and mentor, Evonne Goolagong, who won the title in 1971 and 1980, simply smiled: "Being able to play on the final Saturday here at Wimbledon is gonna be just the best experience ever!"

Defence and veteran groups have welcomed the terms of reference of a royal commission into suicides in the military.

"It's going to be a completely and fairly exhaustive consideration of issues we've wanted dealt with for years," he told AAP.

Scott Morrison has announced how the royal commission into veteran suicides will work and who will run it. | @ChloeBouras #auspol pic.twitter.com/GoOV8njdkD

"Many people thought they'd weasel out of this by rigging the terms of reference and they appear not to have weaseled out of it, probably because of the public outrage that would cause," he told AAP.

Mr James is pleased the royal commission will investigate the role played by the defence and veterans' affairs departments.

"There are too many laws, they are too complex and their administration is too bureaucratic," he said.

"Hopefully the royal commission will suggest clear changes to fix that problem."

Prime Minister Scott Morrison released the terms of reference for the inquiry on Thursday, which will be led by former senior police officer and weapons inspector Nick Kaldas.

The royal commission is due to provide an interim report on August 11, 2022, and a final report on June 15 the following year.

The prime minister who sent Australians to fight and die in Afghanistan doesn't want the subcontracted locals they fought alongside left behind to meet the same fate.

John Howard has piled pressure on the federal government to grant protection visas for Afghan subcontractors who fear for their lives under resurgent Taliban rule.

Foreign Minister Marise Payne is being urged to fast-track applications from interpreters, contractors and security guards as Australia's longest war draws to a close.

Mr Howard, who was prime minister when Australian troops were first deployed to the war-torn country in 2001, said the nation has an ethical duty to provide safe haven for Afghans who aided their cause.

"It was a moral obligation that we shamefully disregarded many years ago when we pulled out of Vietnam," the 81-year-old told SBS TV.

Australia has granted more than 230 visas to Afghans including family members of local workers since April 15.

Spectators will be barred from Olympic venues in Tokyo, with organisers insisting it was the "only choice" after a new state of emergency was declared in the Japanese capital.

The news is the latest setback for the Games, which was initially postponed for 12 months due to the coronavirus pandemic.

The global health crisis continues to have a major impact on preparations for the event, with rising infection rates in the Tokyo region prompting the Japanese government to reimpose emergency measures for a fourth time.

Olympic events taking place in regions of Japan where emergency measures have not been imposed may still admit spectators if the relevant local authorities opt to do so, a statement from the organisers said.

Climate has changed the size of human bodies and, to some extent, human brains, research suggests.

The average body size has fluctuated over the last million years and is strongly linked to temperature, according to a new study.

And while brain size has also changed dramatically, it did not evolve in tandem with body size, researchers found.

Compared to earlier species such as Homo habilis, humans are 50% heavier and our brains are three times larger.

- From July 19 UK residents who are fully vaccinated for COVID-19 will no longer have to self-isolate when they return to England from a medium-risk country.

- The death toll from the collapse of a building in Florida on June 24 has risen to 60 after the discovery of six more bodies in the rubble.

- Four people suspected of being involved in the killing of Haiti's President Jovenel Moise have been shot dead in a brutal shoot-out with police. The president was assassinated in his home early Wednesday and his wife was wounded.

Reply
Upvote
1 upvotes
OMG Goodluck NSW it is a dogs breakfast. Our premier CLEARLY stated if you  go to the rural areas for essential work (all work in this lock down is essential) you must be tested and return a neg result but that is not happening and no one is supervising it. It will be in the rural area very soon. We are all headed for REAL strife. We need firm leadership not wishy washy. Poor  NSW.
G
gypsy 3 months ago