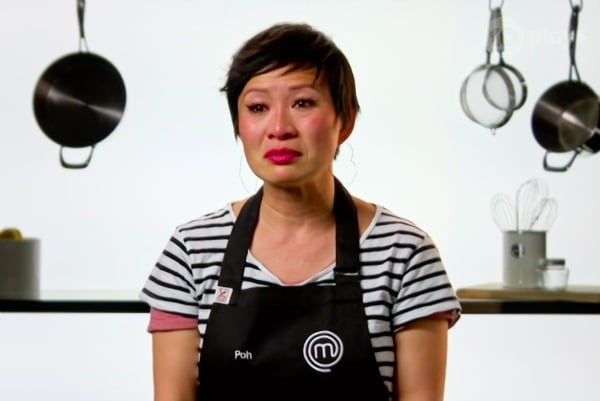 Poh Ling Yeow was undoubtedly one of the most loved contestants on MasterChef Australia: Back To Win.

She's erratic, passionate, and stupidly talented, and somehow we've all just become used to the magic she creates when she (once again) gives herself way too much to do, in a tiny time limit.

But on Sunday night that dreaded clock finally caught her, and she was eliminated from the show just shy of the top five.

It's safe to say collectively as a country, we just aren't coping.

WATCH: Poh's exit interview is everything. Post continues after video.

For Asian Australians, Poh represented a kind of diversity previously absent on our TV screens.

"There was a sense of pride watching Poh (Malaysian/Chinese background) unashamedly draw from her heritage to create otak otak and nasi lemak," wrote Mamamia's Melody Teh after an earlier episode.

"For the many Australians who have an Asian background watching from home, this new season of MasterChef has packed an emotional punch that none of us expected from a cooking competition," Melody added.

Last night, that same sentiment was echoed in the tributes on Twitter.

Hard to put into words what Poh even being on TV meant to me – this part Chinese-Malaysian kid, growing up in a sea of white – and so many other Asian-Australians.

What an absolute icon of Australian food. Gonna eat a goddamn century egg this week in her honour.#MasterChefAU

As the news of Poh's elimination dawned on her fellow contestants last night, Reece's shocked, panicked eyes and Laura's hands over her mouth represented us all. 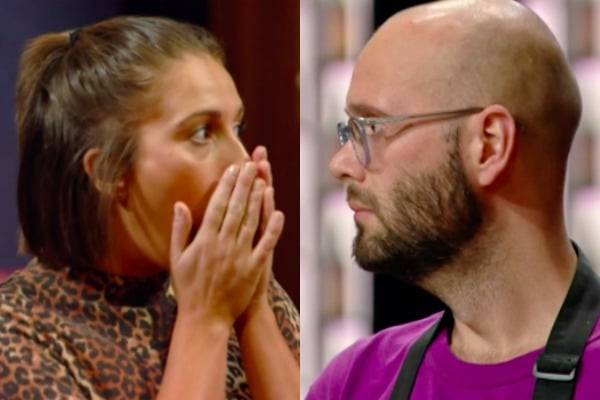 "Poh, you are a national treasure. Every day, we could be guaranteed we would get all of your heart, all of your soul, all of your love and all of your commitment," judge Melissa Leong told her.

"You have been part of the MasterChef family since day one, and it has been the greatest privilege to have you back in this kitchen cooking with us."

"We've been mates for 10 years in work and in social life, and I think when people think of MasterChef in this country, you're probably the image that gets conjured up in their mind," added Callum, as he choked back tears.

Here's how the rest of Australia reacted:

Poh. A true trailblazer, a whole hearted human, and one of the most beautifully vulnerable and strong people I have ever met. You fly the flag for misfits like us and what we are capable of achieving. You’re a fierce, defiant warrior woman, and I love you for it. https://t.co/y68sgzFzVn

Melissa nails it. Poh is all heart and soul. She inspires me to go into the kitchen, to take risks, have fun, be proud of my heritage and pour all my love into my food. I’ve always loved her, and now I love her even more #MasterChefAU pic.twitter.com/dS2b7bZmG9

Poh's @masterchefau journey has been a joy to watch. To be able to watch her reconnect herself with her heritage through food and love for cooking..that can't be beaten!!🌞 #MasterChefAU #poh #nationaltreasure #icon #legend

I just gotta say, tonight's episode made me cry, you mean so much to Australia, Poh! #MasterChefAU

Poh is my spirit animal #MasterChefAU

As Poh’s #MasterchefAU campaign ends... so too does 2020’s last chance at redemption.

Sometimes I’m emotionally stable, and then sometimes I lay in bed crying when Poh gets eliminated. @masterchefau @Channel10AU #MasterChef #MasterChefAU

"I am really proud of myself for getting to top six because they're really amazing. So that must mean I am a bit amazing," Poh said after her elimination.