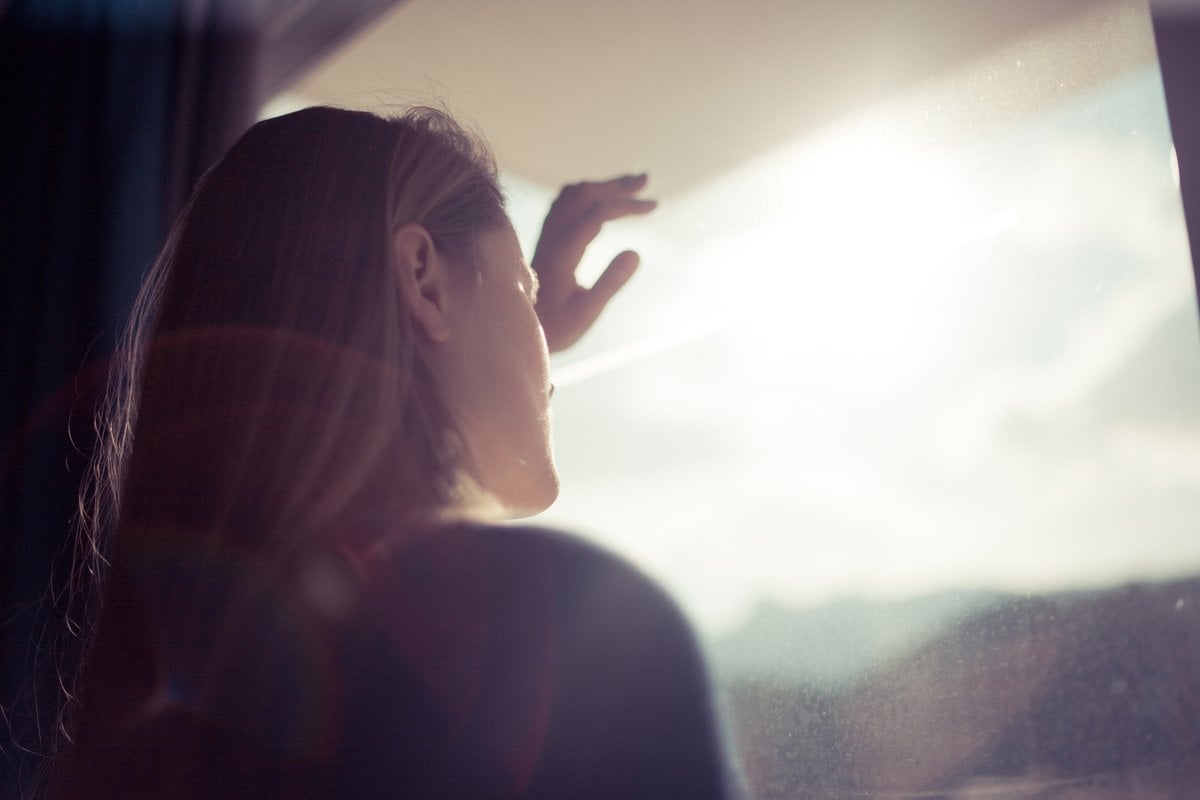 I woke up angry. I hadn’t even opened my eyes yet and I could feel the simmering tension beneath my skin.

"Morning," my husband said. I looked across and in that moment I hated him. Pure hatred.

This is the same man, just a few days earlier I had whispered “I love you” to, whilst massaging his hair. Now I wanted to kill him. To smother him with a pillow. To never see him again.

I didn’t even answer. I just rolled over and checked the date on my phone. I knew without having to look what week it was. It was my dark week.

The week in which I disappear. Where I became a shadow. Black and empty.

Watch: If your period was a person. Post continues below.

I reluctantly pulled myself out of bed and began the monotonous morning routine.

"I’m so sick of ham, I want chicken," my eldest daughter complained while I packed lunchboxes. This comment was enough to make me want to cry

“Yeah well I want to be in bed,” I thought trying to blink away the oncoming tears. Instead I yelled.

My children were startled. I don’t yell. I’m far from perfect but I’m not someone who raises their voice. I’m patient and calm. I love to make up silly songs while I make breakfast. Like Mary Poppins.

I dropped them off at school and sighed. It was a loaded exhale.

“You are a terrible person and a terrible mother,” I thought. I went home and instead of working, I went to bed.

I drew the curtains to block the sunlight. I felt it was mocking me. I wanted darkness. For the outside to match my insides. I slept. I slept to escape my mind.

I know what you must be thinking reading this.

This woman clearly battles with depression. Or some form of mental illness.

I suppose that's fair. Except this was only my state of mind for one week of every month. Every other day I was happy. I loved my job, my husband, my family. I was a positive person who loved my life. Except every month during my dark week.

The week before my period.

It hadn’t always been this way. It began about 12 months ago. When I became completely free of any form of contraception. At the age of 33 I finally had a regular, completely natural cycle.

Before this I hadn’t had a regular cycle for 15 years.

I had either been on the pill, pregnant or breastfeeding.

But after four children and many complications with birth control I wanted to be free of it all. My husband had a vasectomy. I was actually excited to feel as if my body was fully mine. To feel it all naturally.

And oh did I get the feelings.

Then as my period approached each month I slowly felt it start to trickle away. The colours in my world all began to fade.

Ideas I was so confident about suddenly seemed ridiculous.

Outfits I felt great in the week before suddenly seemed too tight and unflattering.

I felt like my own skin was ill fitting and uncomfortable to be in.

Plans I had previously made to see friends now felt overwhelming and invasive. I cancelled them all.

Exercise felt pointless. I only craved sugar. Clutching at any high to temporarily lift the cloud.

I looked at the men in my life with so much jealousy it left a bitter taste on my tongue. How dare they remain so steady. How dare they live their lives without the shackles of a cycle. To not be enslaved by hormones

Was it all supposed to be this hard?

It has been so long I couldn’t remember how normal this level of PMS was. It felt extreme.

I did not think just because the lining of my uterus was shredding that my happiness and self worth would also fall away alongside it.

Worst of all, I felt ashamed. I felt like I had to hide.

I couldn’t stand the idea of becoming THAT woman. The hormonal bitch. The one who must behave irrationally simply because of PMS.

Instead I would try to place on a mask and hide away with the other shadows. Avoiding people. Waiting. Overwhelmed and underwhelmed.

Burning with rage and depleted by sadness.

Finally my period would arrive. I would almost cry from relief.

It would all be over. The darkness would lift.

I would take the cramps. The heavy bleeding. I would lie in a ball and take it all because I knew the sun would return.

That I would feel the warmth on my back once more. And I did. Every month.

Listen to The Quicky, Mamamia's daily news podcast. In this episode, we discuss PMDD. Post continues below.

After many cycles of this I finally decided to seek help. I deliberately scheduled it during my dark week so that I wouldn’t be able to hide. My emotionally wrecked body would not allow me to downplay how bad it really was.

I sat in the hard chair and stared at my hands in my lap. I felt the tears slowly start to roll down my cheeks. I quickly brushed them away, embarrassed at the streaky trail of evidence they left behind. I took a deep breath, lifted the mask and spoke honestly about it for the first time.

“It’s just... I can’t seem to deal with PMS. It’s affecting my parenting, my marriage and my work… I know it’s only a week and I should just get through it but I feel like it’s completely ruining me. I’m so sorry,”  I apologised.

I felt weak. As if I was failing at this very basic part of being a woman.

The doctor listened further to my story and nodded. She then asked, “have you heard of PMDD?”

“It stands for Premenstrual Dysphoric Disorder. It is a severe form of PMS that includes physical and behavioural symptoms that usually resolve with the onset of your period.”

It was all there. It was me. It was every part of my dark week.

There was a reason. I wasn’t crazy and I wasn’t weak. I suddenly felt the same relief I felt every time I saw that blood appear in my underwear.

There were treatments available. It didn’t have to be this hard. I only wish I had sought help earlier.

I believe sometimes as owners of vaginas we just feel as if pain, both physical and mental is part of the deal. That when it comes to periods, pregnancy, childbirth and menopause we are slaves to our hormones. But this doesn’t mean we have to suffer in silence just because it’s a natural part of life.

If you feel something is not right, it’s probably not. I ignored it for too long because I believed it was part of being a woman. That basically, it was tough luck. Normal. That it was only a week. I just had to hold on.

But I now know it was never meant to be that tough. I didn’t have to sit and wait in despair.

I’m still very new in my journey with PMDD.

Perhaps with treatment I will be able to keep the light on, every week of every month.

Reply
Upvote
1 upvotes
This condition is survivable, even though it often feels like it is not-I have lived with it almost 20 years. So many women feel overwhelmed with their symptoms that they’ll try every natural remedy that they can find on the internet-the truth is, if you’ve really got it, you need medication, which is usually SSRI antidepressants and/or birth control. Continuous dosing with Zoely (ie skipping your period and keeping your hormones level all the time) is the front line treatment for PMDD. And a doctor who knows what they’re on about!
News
General
Opinion
True Crime
Politics
Sport
Explainer
Entertainment
Celebrity
Reality TV
Movies
TV
Books
Rogue
Royal
Lifestyle
Beauty
Fashion
Weddings
Home
Wellness
Health
Fitness
Travel
Food
Parents
Before The Bump
Pregnancy
Baby
Kids
Teens
School
Parent Opinion
Work & Money
Money
Finance
Career
Lady Startup
Relationships
Sex
Dating
Separation
Friendship
Family
Real Life
Couples