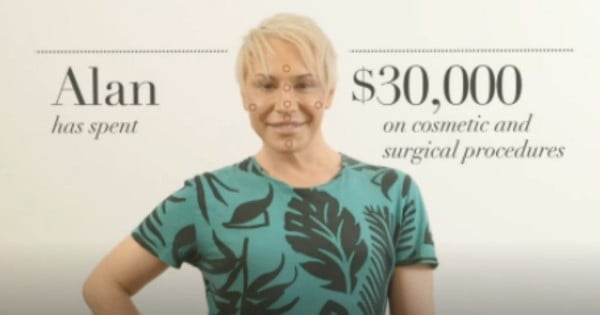 Is plastic the new normal?

A 21-year-old fashionista, a high-profile sex worker and mother of two, and a 39-year-old art director from Sydney have all proudly come forward as Australia’s (unmoving) faces of the ‘Plastic Positive’ movement.

And if you ask them, they would say yes.

With our country stepping up to embrace plastic surgery like never before – to the tune of around $1 billion –  a group of cosmetic enhancement fanatics are pushing the envelope to see just how far they can go.

With massively bloated lips, frozen faces, and breasts the size of watermelons; these people aren’t interested in a few natural looking tweaks – they’re plastic, and proud of it!

SBS’s ‘The Feed’ sat down with several devotees of the ‘Plastic Positive’ movement to find out…um, why?

At just 21, Rita is the youngest of the group – but she’s already been at it for six years, having her first lip filler aged just 15.

She is originally from Kuwait and works as a visual merchandiser; a job which has somehow bankrolled the staggering $15,000 she has spent to date on her botox and fillers.

“I would say I consider myself an extreme beauty achiever,” she says proudly.

“My plastic positive journey started when I was 15, when I was told I had really small lips… so that was kind of my, oh, I’d love if I could fix my top lip a bit.”

Rita thinks that what she was born with was ‘some else’s idea of beauty’ – and so is working to create a face that she is happy with.

“I consider myself a work of art. I see myself as a creation.”

An art director from Sydney, Alan likes to wax lyrical on how the modern ‘beauty’ of cosmetic surgery should be seen as a similar artistic movement to say, abstract art or surrealism. (No pun intended.)

He sees himself as a proud crusader, working against what's acceptable, 'the norm' - a mission that's cost him $30,000 to date.

"The plastic negatives, they think that you know, getting work done - you don't need to just accept the way you are." he says. "Who wants to be old and wrinkly, when you can actually look great and be happy?"

Probably the most shocking of the three is the blow-up doll looks of sex worker Madison, who rose to fame as Richard Pratt's mistress.

The mother of two made the news way back in 2011, when she was apparently swindled out of a $5million trust fund that Pratt promised her.

In the years since, Ashton has maintained her commitment to her 'larger than life' looks: plumped lips, enormous breast implants, and a face that very literally doesn't move. Not even to speak.

"I’ve created a look that is as fuckable as possible," she says."I am a pleasure dome of vajayjay."

Madison reckons that she has used her looks to turn the tables on men, and 'transcend' the powers to be.

Certainly, the argument of aesthetics is a tough one.

These people think they look great, while many people would disagree.

But while many will look to Plastic Positive supporters with pity, the common thread that ties the movement together is actually one of defiance in the face of 'normal'.

Young or old, male or female, these people aren't interested in what anyone else thinks except for the themselves -  a fact that in any other situation would be commended.

But when it comes to disfiguring your face and body with fillers, botox, and even surgery - it is right to let them go so far? Or is plastic surgery just the new mini skirt, with women like Madison Ashton becoming the new Jean Shrimpton?

Either way, it's a movement that is growing, and fast.

There's even an official Plastic Positive website, which has over 80 members.

You must sign up before being allowed entry, obviously to create a judgement-free space for like-minded plastic surgery lovers to show off their wares, compare notes, and provide support for their body-mod choices.

According to Alan Nowark, it's all about finding new ways to change the way you look.

"There are some friends that say you don't need it, you've gone too far," he says.

"But this sub-culture, known as the Positive Movement, is about pushing the boundaries, standing out, refining physically what I'm capable of becoming."

...and so at 1am when your hubby likes the dress and so you hit that pose pic.twitter.com/n52YOCcS1n

From Ice T's wife Coco Austin to reality star Heidi Montag, rapper L'il Kim, and the deceased Big Ang of 'Mob Wives' and Anna Nicole Smith; this uber-plastic look has always been associated with the excess and drama of Hollywood.

It was an epidemic among young women who had nobody in their inner circle to say - "Stop, you've gone too far."

But as the Plastic Positive movement has shown, it's now officially on Australian shores, too - men and women alike.

Going 'too far' is exactly what they're aiming for, and with no present regulation on cosmetic procedures such as botox or fillers in Australia, no one is going to stop them.

In the end, it's their decision and their money. If it makes them happy, fine.