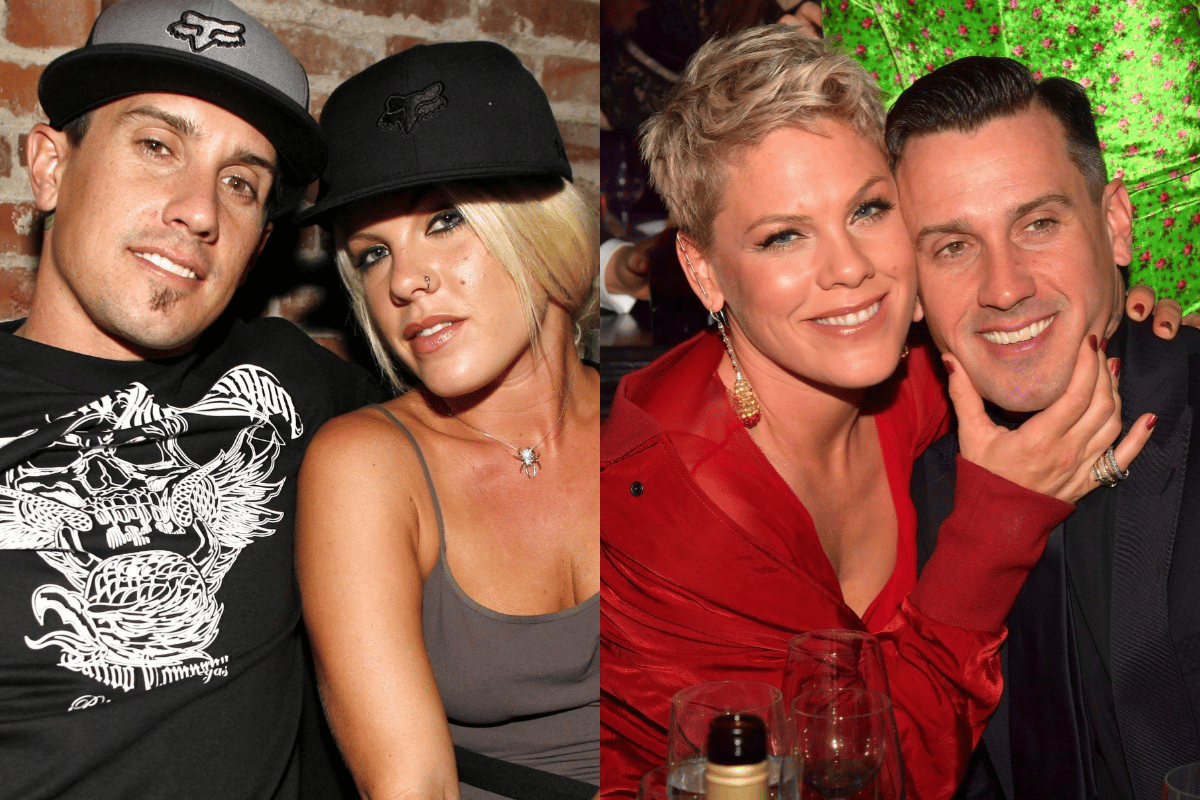 Hollywood relationships are not exactly known for their longevity, but Pink and her husband Carey Hart defied the odds to celebrate 14 years of marriage at the beginning of 2020.

It hasn't been easy, with their relationship weathering two temporary separations, and a family tragedy, to become the solid, happy union with two children it is today.

For that, they can thank couples counselling.

Over the weekend, Pink, whose real name is Alecia Moore, sat down with her therapist Vanessa Inn for an Instagram Live. The 40-year-old said if it had not been for Inn, she and 44-year-old Hart would've probably split by now, for good.

"I got a lot of sh*t for telling people that Carey and I have been in couples counselling with Vanessa," she explained, saying she speaks to Vanessa with Carey, and on her own.

"It's the only reason that we're still together because, you know, I think partners after a long time, we just speak - I can't say it's a man and woman thing, I think it's a partner thing, a spouse thing - that you just speak two different languages.

"You need someone to hear both of you and then translate it for you, and without Vanessa translating for me for the last 18 years, I mean we would not be together," the singer said.

"We just wouldn't, because we are not taught as kids how to have relationships, how to get along with people." 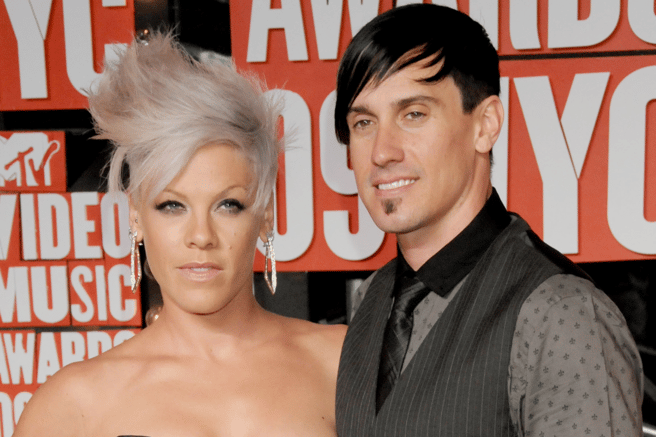 During a motocross race at Mammoth Lakes, Pink proposed to Hart by holding up a sign saying "Will you marry me?" on the sidelines while he raced.

He initially didn't notice and continued on for another lap. Pink then added "I'm serious!" to the sign, prompting Hart to pull over and accept, before Pink made him finish the race.

On January 7, 2006, they married in Costa Rica. But in February 2008, the couple confirmed they had separated.

"The most important thing for you all to know is that Carey and I love each other so so much. This breakup is not about cheating, anger, or fighting. I know it sounds like cliché bullsh*t, but we are best friends, and we will continue to be," Pink wrote in a statement on her website.

They went so far as to draw up divorce papers, but they were never signed.

The couple reconnected when Pink asked Hart to appear in her music video for So What, which referenced their breakup.

Pink supported Hart through his grief after the death of his younger brother Anthony on August 9, 2008, from a motorcycle accident. She attended the funeral and performed at the celebration of life afterwards.

Later in the year, Hart asked his then-ex to perform at his Las Vegas club on New Year's Eve 2008, which led to their reconciliation after 11 months apart.

"Eleven months after we broke up, he asked me to fly to Las Vegas to perform on New Year's Eve at his club," she later said in an interview with redbook.

"After sound check I told him that he needed to come to my room. I had made him a photo album of all the cards he had ever given me, of all the photos of our entire relationship. I spent months on this album. On the last page, I pasted a photo of me from a really bad movie I made years ago with my neck slit and blood everywhere. Next to it I wrote, 'This is me without you.' On the next page, there was a picture of a baby. And I wrote: 'The rest is unwritten.' The divorce papers that we never signed were behind that page. I was like, 'The rest is up to you.' And I did all of this in his favourite bra and panties."

Needless to say, that worked as intended.

In November 2010, Pink announced on The Ellen DeGeneres Show that she and Hart were expecting their first child, and their daughter, Willow Sage Hart, was born in June 2011.

In December 2016, their son Jameson Moon was born. 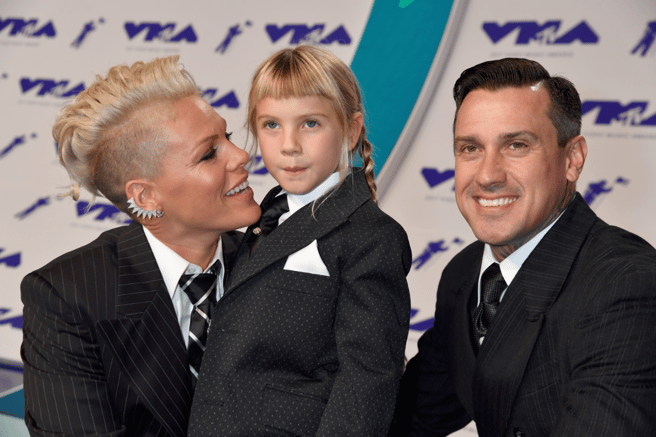 Pink reflected on the ups and downs of their relationship in a 2017 interview with The Guardian.

"There are moments where I look at [Hart] and he is the most thoughtful, logical, constant... he's like a rock. He's a good man. He's a good dad. He's just the kind of dad I thought he'd be and then some.

"And then I'll look at him and go: I've never liked you. There's nothing I like about you. We have nothing in common. I don't like any of the sh*t you like. I don't ever wanna see you again.

"Then two weeks later I'm like, things are going so good, you guys. Then you'll go through times when you haven't had sex in a year. Is this bed death? Is this the end of it? Do I want him? Does he want me?

"Monogamy is work! But you do the work and it's good again." 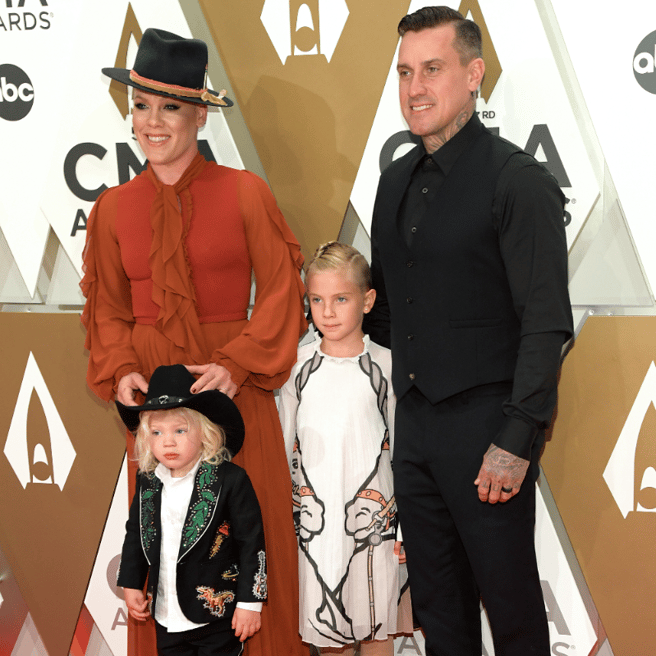 Pink and Hart with Willow and Jameson in November 2019. Image: Getty.

In an interview with 60 Minutes around the same time, she admitted there was a time when she would hand back her wedding ring each night.

"We have learnt the art of communication. I don't hand my wedding ring back every night like I used to. Cause that's just dumb and I can't actually get it off," she told interviewer Allison Langdon.

On Pink's 40th birthday in September 2019, Hart said he couldn't wait to see what his wife achieved next.

"You have become a successful business woman, superstar, dedicated mother, philanthropist, supportive wife, wine maker, motorcycle mama, and amazing friend to all around you," he wrote.

"I'm so proud of the woman you have become, and you are more beautiful than ever. You truly are like wine. You just keep getting better, and I'm so lucky to be along on this crazy ride with you. I love you baby. Looking forward many, many more birthdays with you. I can’t wait to see how nuts you and I are in our 80s.

In January, the couple celebrated their 14th year of marriage, with Hart saying he was "so proud" of the life they had built together in a tribute on Instagram.

"Both of us came from broken homes, yet we made the choice to work hard at our relationship. And look at us now!

"Two misfits when we met, we have grown together and now have an amazing family. Thank you for being my best friend (I know you don’t like that), and amazing mother to our wild kids. I love you so much."

In late November, Pink announced on the red carpet of the Country Music Association Awards, she was planning a break from music to spend more time with her family.

"We did two-and-a-half years [recording and on tour] and Willow is back in school now and Jameson's gonna start preschool soon, so it's kind of the year of the family," the singer told Entertainment Tonight.

"[Hart] is super supportive. He follows me around the world, and now it's his turn."