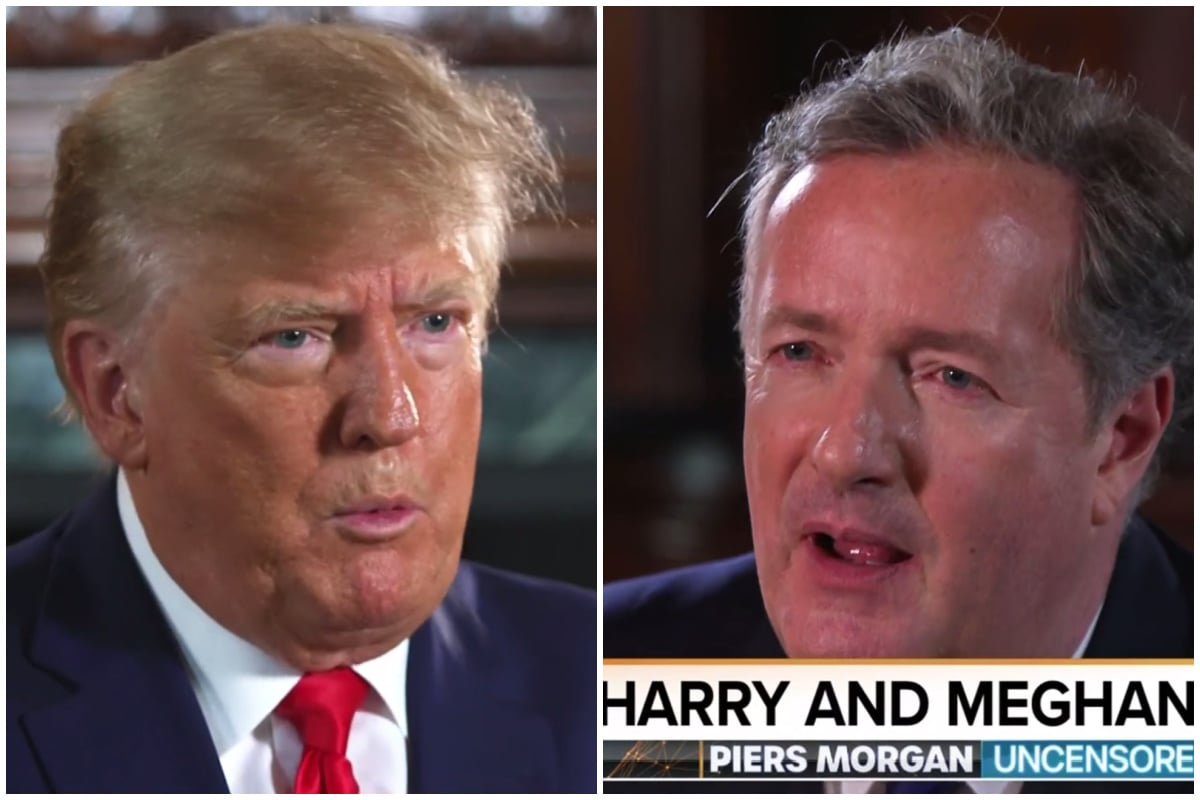 I'm sitting in a park in Sydney when I see a billboard for Piers Morgan's new show, Uncensored.

Goodness, I think to myself. That's an awfully large advertisement for a man who believes he's being gagged. How exciting that someone who has been so censored, whose voice has been so repressed, now has a platform. 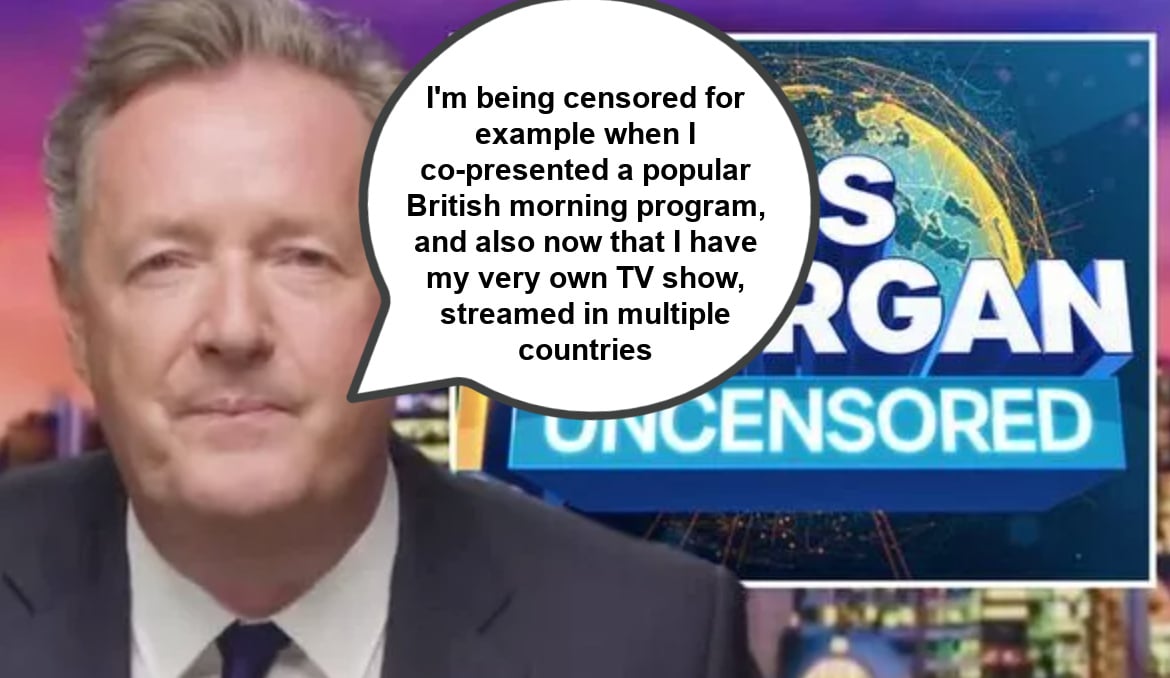 How will you possibly get your voice out there???? Image: Flash TV.

When I saw that Donald Trump was Morgan's first guest - another quiet man who has historically been voiceless, most notably when he was president of the most powerful nation on the planet - I knew, shamefully, that I was going to have to watch. And recap it. Like an episode of bad reality TV where grown adults yell at each other and storm out, and it's embarrassing for everyone.

Bizarrely, Morgan throws to a cameo from Ricky Gervais who says he was asked to be a guest on the show and said definitely not. Then producers asked him if he wanted to send Morgan a good luck message, and he asked, 'do I have to mean it?' and they said no. So he says good luck.

What a beautiful sentiment.

But SHUT UP because Morgan is insisting this is a no cancel zone, and he even has graphics to prove it.

IT'S SO IMPORTANT IT'S IN CAPITAL LETTERS. Image: Flash TV.

"For all ultra-sensitive, permanently offended woke snowflakes who may have accidentally tuned in tonight, you’re not going to enjoy this show," he says.

"In fact, it’s going to really annoy you - it may even provoke trauma."

Guys. This is about freedom of speech. And we need to be able to say what needs to be said without worrying about who it's going to offend?? Otherwise what are we as a species?

So what does he use this vitally important freedom of speech to do? What is weighing so heavily on him he needs a platform, in addition to his social media, books, and columns? As well as the time he was the editor of some of the most widely circulated publications in the world and also aired his opinions regularly on the television?

It's Meghan Markle. He wants to call her Princess Pinocchio.

Somehow, we're 15 minutes and one ad break in and while we've been given snippets of the Trump interview, it hasn't actually... started.

I don't mean to be rude but hurry the f*ck up?? I have things to do that aren't calling someone named Nigel a 'treacherous little weasel'? 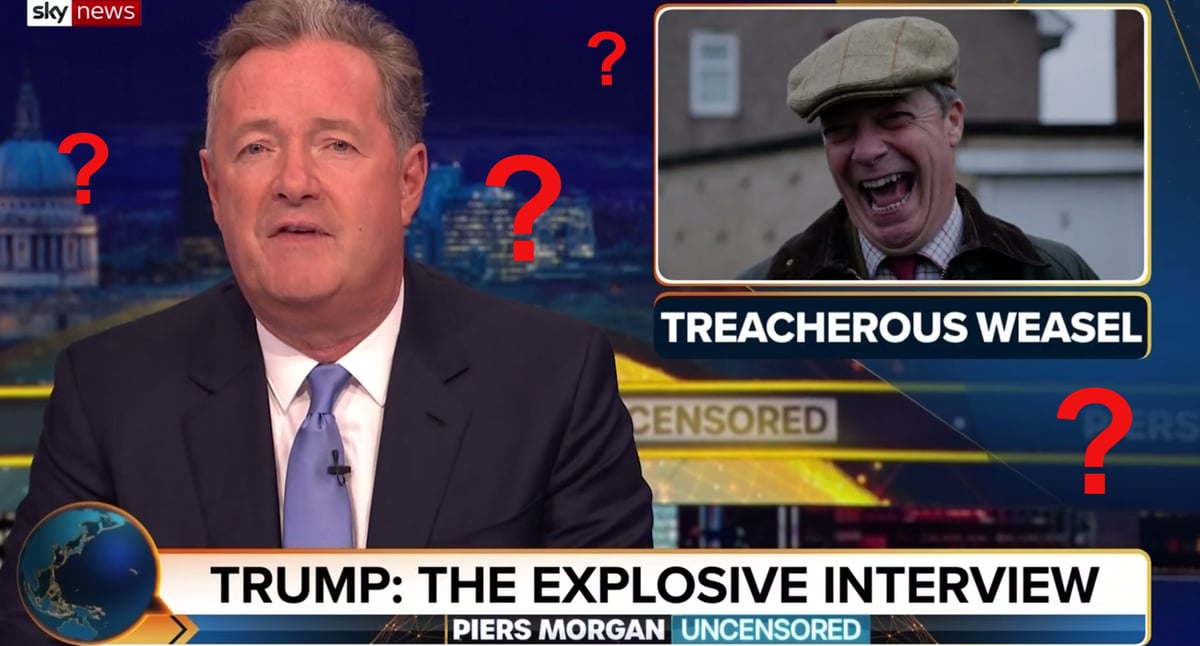 Mate I feel like you're... distracted. Image: Flash TV.

You see, before the interview, Nigel sent Donald Trump a dossier of all the mean things Morgan had written about him over the years. So Trump got grumpy and yelled at Morgan because he thought they were friends.

Okay women always have this reputation for being bitchy and gossipy but this 57-year-old man has been bitching (about Twitter, the royals, the guy he's about to interview) for a quarter of his show.

Finally, 16 minutes in, the interview begins.

Immediately, Donald Trump brings up high gasoline prices as an argument for why he was the very best president and the current president is very bad.

I'm about to whisper, 'oh... have you heard about the... war,' but yes he has and he would like everyone to be aware of this fact:

The war wouldn't have happened if the election wasn't rigged. And if he was still president.

I had genuinely forgotten. How ridiculous this man is. And now I remember. And it's upsetting.

Trump, you see, apparently threatened Putin like he'd never been threatened. Which is a foolproof strategy.

Weirdly, while talking about the war in Ukraine, Morgan refers to Trump as Mr. President, even though a) he is not, and b) the actual president is probably too busy dealing with *gestures broadly at everything* to chat to Piers Morgan about the 'dangerous opinions' that have left him with nothing except his very own talk show.

Speaking of the current president, Trump calls him 'Biden Joe' instead of 'Joe Biden' which feels petty.

Thankfully, Trump agrees that what's happening in Ukraine is "horrible," and that it's a "stupid war". He really had a way with words.

"Because of a rigged election."

"We would've had nobody dead."

Trump explains he had conversations with Putin about what he would do (??) and Putin said 'REALLY' and Trump said 'really' and honestly his foreign policy is second to none.

He had similar conversations with China's president about invading Taiwan. So.

'Notice how everything always went swimmingly during my presidency?' Image: Flash TV.

Talking about the conflict, and how it may be the beginning of a nuclear war, Trump modestly says that he's been "the best predictor of things ever."

He also shares what happened when he met Kim Jong-un, who told Trump he had a big red button on his desk. Trump responded he has a red button that's "bigger and stronger than yours and mine works," and holy sh*t is this honestly what goes down during the most sensitive peace talks of our time.

Towards the end of part 1 (WHY ARE THERE TWO PARTS), Trump gets to talk more about the "crooked, corrupt election." When Morgan disagrees that it was rigged, Trump calls him a "fool," explaining that he has "massive proof" that it wasn't free and fair.

But look. They've been teasing it. And all I want is to get to the part where Trump and Morgan gossip about the royals.

Morgan spends the opening of part 2 recapping part 1 and discussing all the very exciting media attention he got and THIS IS THE WEIRDEST SHOW.

Finally, we get to Trump talking about the time he met the Queen and she "really liked him". Apparently people said they'd "never seen her smile so much," and Sir she was amused because you are a caricature. She was thinking about what a funny (but deeply disturbing) chapter this will be in her biography. 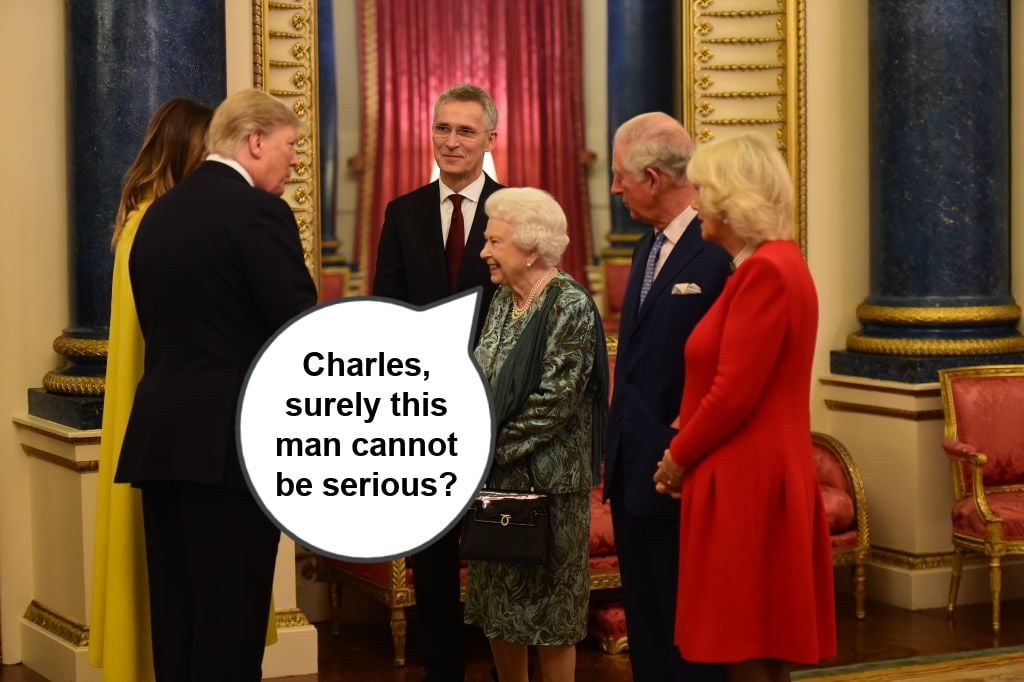 'I love a practical joke but this one feels like it's gone too far.' Image: Getty.

That's how Morgan steers the conversation towards his very favourite topic - his personal hatred of Meghan Markle.

"I'm not a fan of Meghan - wasn't from the beginning," Trump says, and I'm pretty sure Morgan wees himself with excitement. "I think poor Harry is being led around by his nose, and I think he's an embarrassment."

"I want to know what happens when Harry decides he's had enough of being bossed around," Trump says. "Or when she decides she likes some other guy better."

Because Meghan Markle is a witch. And she's cast a spell on poor Harry, who otherwise has no reason - none at all - to have issues with the royal family.

Trump assures Morgan that their relationship will end, which really solidifies the fact that we're currently watching two grown men bitch about a celebrity marriage. '"I've been a very good predictor, I've predicted almost everything," Trump says and omg how embarrassing you already said that. About the war. Think of a new flex.

He moves on to whinging about Harry not attending Prince Philip's memorial service, which he says was "the worst of all."

He retells the story of how he was in the Plaza hotel with the late royal, and the photographer instructed a group of them to "move back". But Prince Philip said, "no you move back."

And he "didn't say it in a nice way." So that's why Trump likes him. In case you were wondering.

But back to the main issue here. Trump calls Harry a whipped man, and Piers Morgan says he's the most whipped man in the world, and what would we do without these vital conversations?

They move onto the topic of transgender athletes in women's sport, and this is the point where I no longer can.

The interview ends with Trump's aid getting pissed because Morgan has said 'last question' four times, and Trump explaining that's because he's 'dishonest'.

Does Trump storm out? No. Not even a little bit. But Uncensored has made it look that way in the trailer, because they realised they pretty much spent the whole interview bitching about a woman for no reason.

And that, it seems, is what happens when Piers Morgan is finally given the chance to speak.

For more from Clare Stephens, you can follow her on Instagram or  TikTok, or listen to her podcast, Cancelled.

Reply
Upvote
4 upvotes
Meghan didn't want to be Piers' friend (and honestly, who would) so now he's just going to say nasty thing about her for all eternity? What a fragile little ego he has. To quote the great Buzz Lightyear - "You are a sad, strange little man, and you have my pity.".
L
laura__palmer 25 days ago