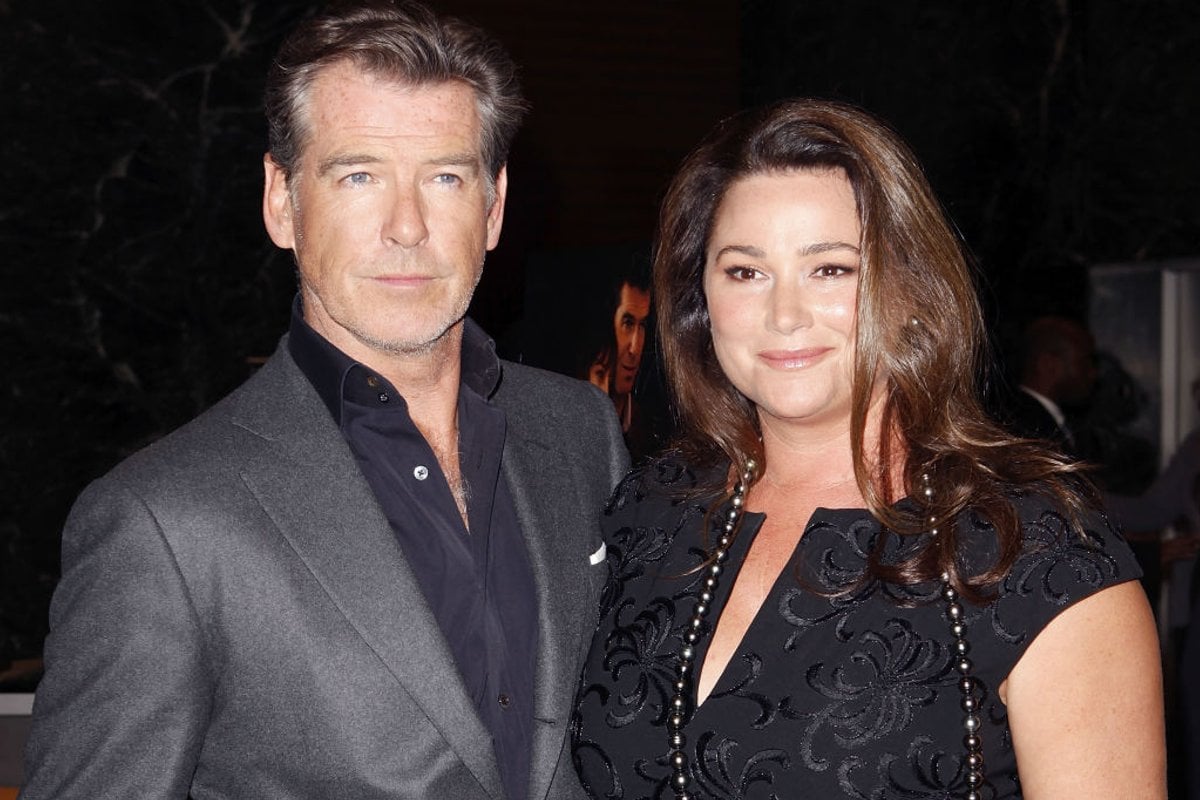 Pierce Brosnan has paid tribute to his wife Keely Shaye Smith on the 28th anniversary of the couple’s first meeting.

"My love always," the actor posted on Instagram earlier this month. "You have made my life one of joy and happiness."

Before the joy and happiness, Brosnan had more than his fair share of tough times and tragedy. He grew up in a small town in Ireland, without his father or his mother. His father Tom walked out when he was a baby, and his mother Mary left him with his grandparents to become a nurse in London.

"Consequently, there was a certain amount of early loss in that young boy’s life," Brosnan told Cigar Aficionado magazine.

Watch: Pierce Brosnan with his sons at the 2020 Golden Globes. Post continues after video.

After his grandparents died, Brosnan ended up lodging in "a poor part of town", before his mother finally brought him over to London at the age of 10. There, he went to a cinema, where he saw James Bond for the first time.

"The music, the women, the shimmering silhouettes of nakedness, and this wonderful woman lying on the bed," he remembers.

Brosnan planned to become an artist, but drifted into acting. One of his friends from drama school, David Harris, kept raving about his aunt, Cassandra Harris, who was an actress, and one day, Brosnan went to her house.

"I saw her coming down the staircase, and I thought, 'What a beautiful-looking woman'."

Born and raised in Australia, Cassandra Harris was 10 years older than Brosnan, had already been married twice, and was a mother to two children, Charlotte and Christopher. Brosnan’s friend played matchmaker, even though his aunt wasn’t initially interested.

"Here was this funny-looking man with this short haircut," she later said. "But we had much in common – acting, books, music – and once we started talking, we never stopped."

"We just clicked as a family," Brosnan later told the Daily Express. "Charlotte and Chris have just been amazing in my life."

Within a few years, Brosnan and Harris were married.

Early on, Harris was more high profile than her husband, winning roles in movies while he was doing theatre. The couple moved to the States, and Harris played Countess Lisl von Schlaf in the 1981 Bond movie For Your Eyes Only.

The following year, Brosnan’s career took off in a big way, when he was cast as the lead in the TV series Remington Steele. Harris played a former flame of his.

Life was good. The money was rolling in, and the couple had a son of their own, Sean. Brosnan’s father tracked him down when he was filming Remington Steele in Ireland. They had a drink one Sunday.

"Then he got on a bus and I never saw him again," Brosnan told Interview. "He died."

While the family was in India for Brosnan to shoot the movie The Deceivers, Harris noticed her stomach was swollen and she was feeling unusually tired.

Back in London, she was diagnosed with ovarian cancer, the same disease that had claimed her mother’s life when she was in her teens.

Harris fought the cancer for four years. Eventually, when she was in hospital in December 1991, knowing she was going to die, she comforted Brosnan.

Harris passed away in Brosnan’s arms, with Christopher in the room and Charlotte on the phone from London.

Brosnan had to go home and sit eight-year-old Sean in his lap, and tell him that his mother had died.

"The tears came to his eyes, but they never fell. He just said, 'It’s for the best, Daddy. She’s not in pain anymore'."

He told People that Harris, who was 43 when she died, made him the man he is.

"She’s forever embedded in every fibre of my being. She’s there with me every day."

The loss was a terrible one for Brosnan and his three children (he’d adopted Charlotte and Christopher after their father, Dermot Harris, died). By then, Charlotte was an aspiring actress and Christopher was studying to be a filmmaker.

"How do you carry on afterwards?" Brosnan said in Cigar Aficionado. "Slowly. Very, very, very slowly. It hurts. And you have to sit and endure it. There’s nothing else to do; it won’t go away."

Brosnan kept working, making hits like Mrs Doubtfire. In 1994, he was at a party on a beach in Mexico when he met actress-turned-TV correspondent Keely Shaye Smith. Smith was there to interview Ted Danson, but was smitten by Brosnan.

"He was captivating," Smith told People. "Tall, dark and handsome – everything that everybody would immediately be attracted to. He had this mischievous sparkle in his eyes."

A few days later they had their first date and talked till 3am.

Brosnan became the next James Bond, something Harris had always wanted for him. As he shot movies like Goldeneye, he stayed close to Smith.

"Wherever I went in the world I missed her, and I’d send her tickets to come so we could be together."

They had two sons, Dylan and Paris, then married in 2001. Charlotte was a bridesmaid at their wedding.

"Just seeing the ultimate love that these two people have for each other was unbelievable," Charlotte said at the time. "My dad found it again, and that makes me happy."

By then Charlotte herself was a mother to Isabella, and a few years later she had another child, Lucas, with husband Alex Smith. She had roles in shows such as NYPD Blue. Tragically, she was diagnosed with ovarian cancer, just like her mother and grandmother, and died at the age of 41.

"Our hearts are heavy with the loss of our beautiful dear girl," Brosnan said in a statement at the time. "We pray for her and that the cure for this wretched disease will be close at hand."

As for Christopher, he became an assistant director, working on some of his dad’s Bond movies. But he got hooked on cocaine and heroin, and in 1997, he was sentenced to three months in jail for drink-driving.

In a Playboy interview in 2005, Pierce revealed he no longer spoke to Christopher.

"Christopher is still very lost. Shockingly so. I know where he is, but he's having a hard life. I can only have strong faith and believe he will recover."

The following year, Christopher appeared on Celebrity Love Island, coupling up with model Sophie Anderton. He and Brosnan now have a "loving communication", according to Esquire.

As for Sean, he became an actor but also struggled with addiction. On the podcast Inner Space With Dr Barbara Van Dahlen, he revealed that he broke his back in a car accident at the age of 16, which led to an addiction to painkillers.

From there he became a "drug connoisseur". He landed some acting roles, and eventually got sober, but started drinking again after Charlotte died.

"The insidious part of the disease was that I almost used it as an excuse," he said. "I was like, 'Oh good'."

Since marrying actress/producer Sanja Banic and becoming dad to daughter Marley, Sean has managed to stay sober and has started working in mental health.

Brosnan’s two youngest sons, Dylan and Paris, are both models and filmmakers.

Brosnan told Gentleman’s Journal last year that he cherished family "very much", because he grew up without a father figure or a solid family.

"So I value and love the family," he added. "Keely is the most amazing mother and woman – I’ve watched her grow up over 27 years, watched our life together just blossom and grow. And there are still many more dreams to be had."