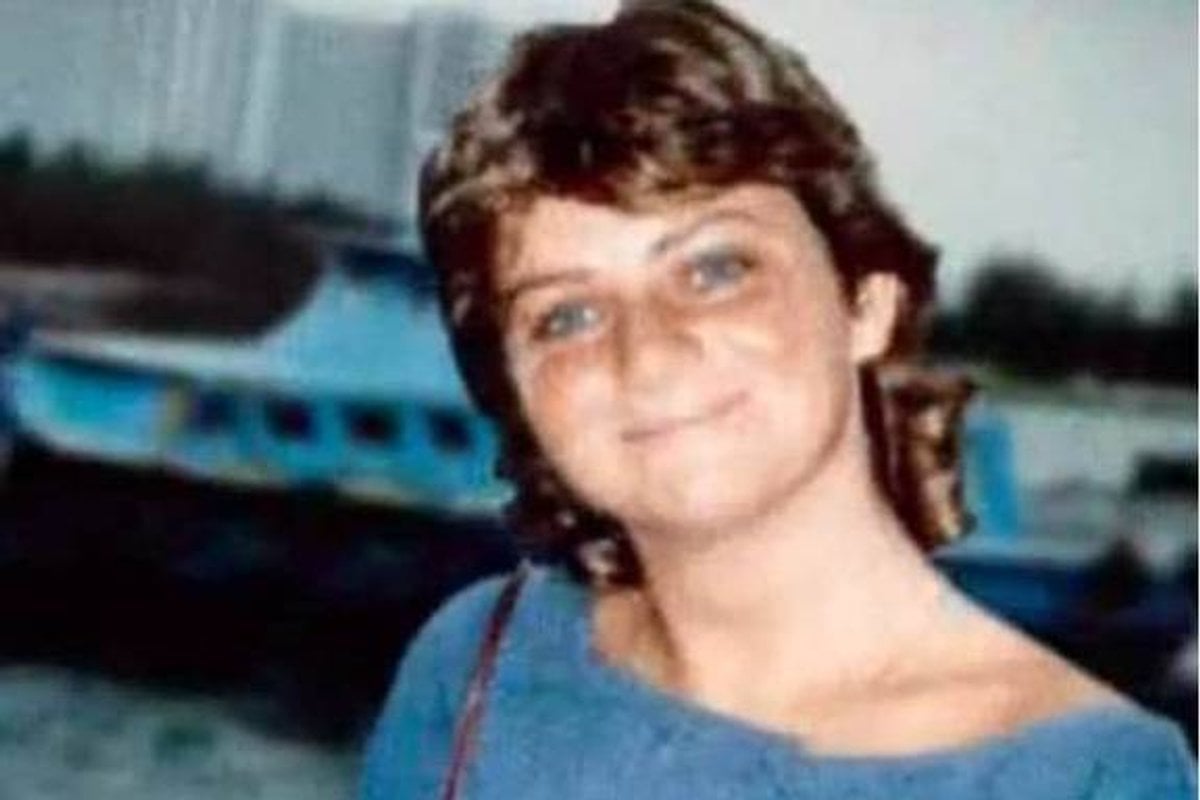 On the evening of September 22, 1986, Fergus Cameron and his wife, Vivienne, sat in their local hospital on Victoria's Phillip Island. Fergus was bleeding from wounds to his back and a cut to his ear.

The couple were well known in the 4,000-strong community. Fergus was a founding shareholder in the island's famous Grand Prix circuit, and his brother was a shire councillor.

That night, a nurse probed the couple about the cause of Fergus' injuries, but she felt that the pair were being cagey. She claims they mentioned something about the 36-year-old a falling through a plate-glass door.

His wife, he said, had confronted him about his longstanding affair with Beth Barnard (pictured), a 23-year-old woman who used to work on their property as a farmhand.

As tensions escalated, Fergus told police, Vivienne grabbed a wine glass and attacked him, striking him on the side of the head and on his back.

After seeking treatment at the hospital, the couple returned home around midnight. Vivienne then dropped him to his sister's place in their Land Cruiser, and around 3am phoned a friend to collect their two children. She told them she needed to take her husband to the hospital; a trip that that had occurred hours earlier.

By the time the Phillip Island community woke that morning, Vivienne was nowhere to be found. And Beth Barnard was dead.

The wine glass, the handbag and other curious questions.

Beth Barnard's injuries were some of most gruesome police had encountered.

She lay in her bed, covered by doona that masked the worst of them.

Her throat had been slit, her body stabbed and cut, and there were wounds to her hands and forearms suggesting she had tried to defend herself.

A large letter 'A' had been roughly carved into her chest, which speculation suggests could be an allusion to Nathaniel Hawthorne's 1850 novel The Scarlet Letter, in which an adulterous woman is sentenced to wear a red 'A' as a punishment.

A kitchen knife lay nearby. As did a littering of cigarette butts, later determined to be Claridge and Peter Stuyvesant brand (Beth wasn't known to be a smoker). No distinguishable fingerprints were found.

It was Fergus' brother and brother-in-law who'd discovered Beth's body. They dispatched them to the home that morning amid news of Vivienne's disappearance and with her alleged threat from the night before ringing in his ears.

Later that afternoon, the family's Land Cruiser was found parked at the Phillip Island Bridge. Vivienne's handbag was inside, along with two packets of Claridge cigarettes, a box of matches, a face cloth, and a knife. Fearing the worst, police divers scoured the water for days, but to no avail.

The conclusion reached by authorities was that, after dropping off her husband, Vivienne had murdered Beth, then taken her own life.

Fergus had told police that, before he and his wife entered the hospital after their altercation, she'd threatened that she was "going to get that little bitch".

A 1988 coronial inquest accepted that version of events.

"Although [Vivienne's] body has not been found, I am satisfied that she is dead, and that she leapt from the bridge into the water," Victorian Coroner BJ Maher concluded. "And I further find that the deceased contributed to the cause of death."

But the narrative has long been considered contentious.

Listen: Crime writer Vikki Petraitis on the many unanswered questions in the Phillip Island murder.

Among the inconsistencies is the insistence of local woman Glenda Frost that she spoke to Vivienne at 10am on the morning of her disappearance, long after she was purported to have taken her life.

In her years-long investigations into the case, crime writer Vikki Petraitis, the author of The Phillip Island Murder, has spoken to Glenda several times.

In a recent interview with Mamamia's True Crime Conversations podcast, she explained that the pair worked together at the Community House, and that the phone call was regarding a present for a retiring co-worker.

A friend who was with Glenda at that time has corroborated that Glenda spoke to a person she believed to be Vivienne.

Vikki, who worked with Casefile on a podcast about the case, points to other curiosities.

For one, no broken wine glass was recorded when police searched the Camerons' home.

Also, the couple who collected the unsupervised Cameron children in the middle of the night claim they saw Vivienne's handbag there — the same handbag later found in the abandoned Land Cruiser.

If that's accurate, it would suggest that sometime in between killing Beth and taking her own life, Vivienne drove home to collect it — something that muddies the official timeline.

For Vikki, the key question is whether, if she were alive today, Vivienne would be convicted of murder.

There is little evidence connecting the mother with the murder scene, and no traces of Beth's blood in the Land Cruiser she apparently drove afterwards, despite the frenzied, messy nature of the killing.

"For me, it's always been about a sense of justice. And if she didn't do it, then that means that Beth's murder has [gone unpunished].

"I suppose until we get an answer, we're just left to ask a lot of questions."

Vikki Petraitis' Casefile podcast, The Vanishing of Vivienne Cameron, is available on Spotify.

If this post has raised any issues for you, crisis support is available 24 hours a day via Lifeline. Please call 13 11 14.