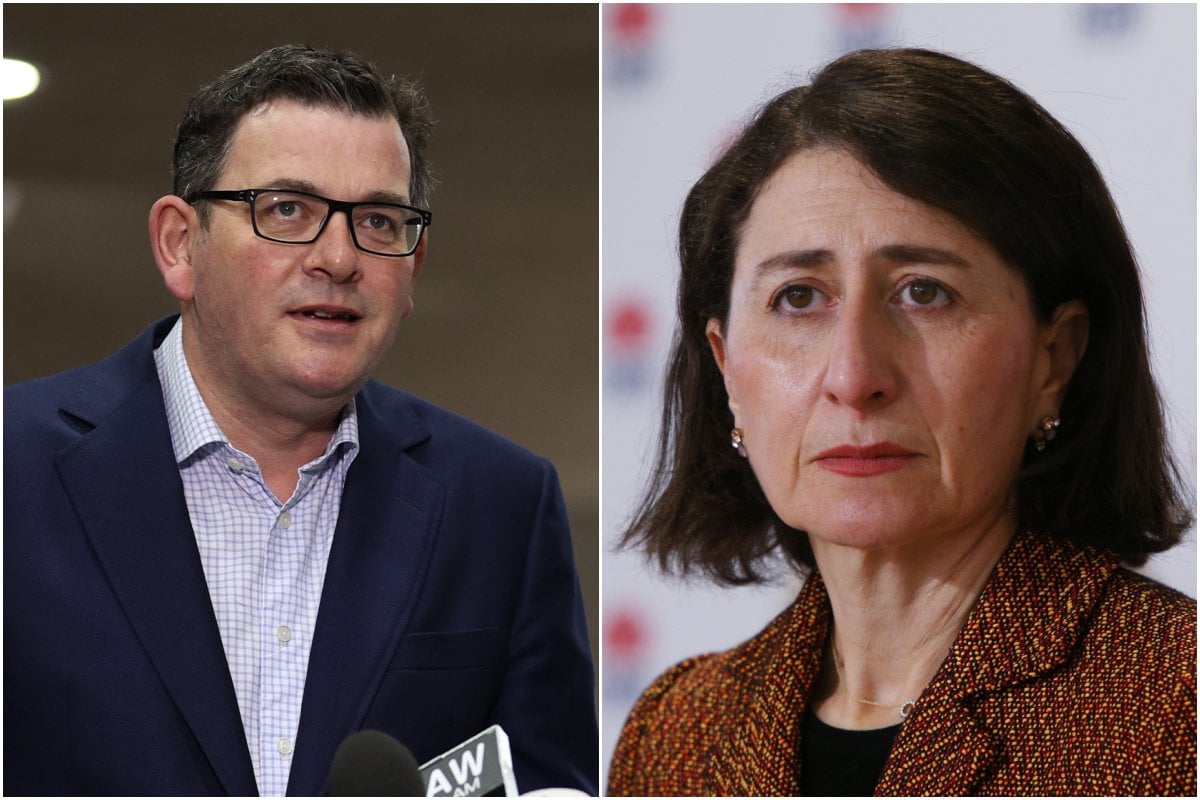 Victoria coming out of lockdown at midnight tonight.

For a third straight day, all the new locally acquired cases on Tuesday have been linked to Victoria's current outbreaks and were in isolation for their entire infectious period.

There are seven Victorians in hospital with coronavirus – two in intensive care and one being ventilated.

Premier Daniel Andrews is urging caution once lockdown lifts, urging Victorians to, "please don't go and visit mum and dad at their place."

Borders will be tightened with NSW, with residents of the Wagga Wagga, Hay, Lockhart and Murrumbidgee local government areas no longer able to enter Victoria without a permit.

"I take no pleasure in having to essentially lock out those four communities from Victoria, but there's a refusal to lock people in Sydney into Sydney, so I have no choice but to make these changes," Premier Daniel Andrews said.

South Australia is also coming out of lockdown at midnight Tuesday night, with zero new COVID cases to report today.

Premier Steven Marshall kicked off the press conference by offering "a massive thank you to absolutely everybody", but especially people who went into isolation.

Did SA's 'double-ring fencing' approach save it from prolonged lockdown? https://t.co/iLRJDax9pf

When the lockdown lifts, SA will keep a range of heightened restrictions including a general density requirement of one person to every four square metres.

Masks will be required in high-risk settings, such as aged care centres, in medical services and on public transport.

NSW has reported 172 new locally acquired cases of COVID-19 - a new daily high - and at least 79 of those people were circulating in the community for all or part of their infectious period.

Greater Sydney and surrounding regions are in lockdown until at least July 30, as health authorities battle to contain an outbreak of the virulent Delta strain.

"Time and time again cases are popping up in workplaces ... but also in households," Premier Gladys Berejiklian said on Tuesday.

Two women in their 80s who died of the virus, as reported on Monday, were household contacts of people who were unvaccinated.

A multi-storey apartment block in western Sydney has been locked down with a police guard to enforce two weeks of quarantine after six cases of COVID-19 were detected amongst the residents.

Five people have also tested positive in one household on the NSW Central Coast, resulting in 25 new exposure sites in the area.

Central Coast residents who attended an anti-lockdown protest in Sydney over the weekend have been blamed for keeping the region under stay-at-home orders. #7NEWS https://t.co/NJB3jL9ali

Western Sydney Local Health District on Monday announced pop-up clinics will be set up across the Merrylands and Guildford area for three weeks for AstraZeneca vaccinations.

All people aged over 40 will be able to receive the jab without a GP referral.

Meanwhile, frontline workers for Woolworths, Aldi, Coles and Metcash in Fairfield, Liverpool, Canterbury-Bankstown, Cumberland and Blacktown will from this week gain priority access to the Pfizer vaccine.

Ms Berejiklian has revealed a decision on a potential tightening of restrictions could be made as soon as tomorrow as Sydney's west emerges as the city's new COVID ground zero.

Questions being raised about where the 'extra' Pfizer doses came from.

Northern Territory Chief Minister Michael Gunner has raised concerns the Commonwealth may be sending Pfizer vaccines promised to other jurisdictions to NSW.

The Labour leader said he hoped the announcement that 50,000 extra Pfizer doses would be sent to the virus-ravaged state was "a very poorly chosen set of words".

Mr Gunner questioned where the extra doses had come from and why they had been kept in storage and not already sent to the states and territories.

"We are in an emergency. Get the Pfizer out. Get it into people's arms," Mr Gunner told reporters on Monday.

Northern Territory Chief Minister Michael Gunner has raised concerns the Commonwealth may be sending Pfizer vaccines promised to other jurisdictions to NSW. 👀https://t.co/I71jzwJI2A

He said the national cabinet had previously been told the vaccine was distributed immediately upon arriving in Australia.

"I am not aware of a national stockpile," he said.

"I am worried that maybe is just code for the fact that they took out of other people's allocations.

"They didn't want to say who or which state they took it from."

Mr Gunner said ensuring all Australians were vaccinated as quickly as possible was critical.

"Do it now. Do it immediately. Get the vaccine out, every state (and territory) needs it," he said.

Mr Gunner called on the Commonwealth to explain the situation, saying he hoped every jurisdiction would receive extra doses.

Commonwealth Deputy Chief Health Officer Michael Kidd made the announcement during a press conference on Saturday.

"The Commonwealth will increase the emergency allocation to NSW of additional doses of Pfizer from 150,000 to 200,000 doses this week," he said.

Lieutenant General and head of the COVID task-force, John Frewen told The Project the 50,000 doses were allocations from September that had been brought forward.

The Covid picture is positive across most of the country tonight, but sadly, Sydney has recorded another day in triple digits. We chat to LT Gen. John Frewen about what’s happening with Australia’s vaccine rollout. #TheProjectTV pic.twitter.com/LVHhK7pi33

The South Sydney Rabbitohs are reportedly considering stripping former captain Roy Asotasi of an award named after him, after he proudly posted photos of himself attending Saturday's protest march on social media.

Asotasi attended with former Bulldogs teammate Ben Roberts, with both facing the prospect of $1000 fines from NSW Police.

Roy Asotasi may have just cost himself a major honour at South Sydney. https://t.co/3zVWZD2AR0

The wife of former Manly Sea Eagles player Frank Winterstein, Taylor Winterstein, revealed she and her husband had been visited by police over the weekend due to their participation in the rally.

In a statement last night, NSW Police said it had received more than 5500 reports from members of the public relating to the Sydney protest and more than 200 people had already been identified.

A returned traveller who tested positive for COVID-19 after completing hotel quarantine may have been infectious on the Gold Coast for up to 12 days.

Chief Health Officer Jeannette Young is scrambling to work out where the man picked up the virus as the list of exposure sites linked to him grows.

She says he either got it during a recent trip to China, in hotel quarantine in Brisbane, or after he was released on July 12 and went home to the Gold Coast.

NEW: A Gold Coast man didn't get tested for COVID-19 on July 15 when he got symptoms, two days after leaving hotel quarantine on July 12.

He first got tested on an unrelated GP visit on July 24.

He may have been infectious in the community for 12 days.
https://t.co/NVXZvB2Lvj

The man, who was fully vaccinated, returned three negative tests while in hotel quarantine. However, he fell ill on July 15, three days after his homecoming.

AAP understands he did not seek a coronavirus test despite having symptoms.

Meantime, Premier Annastacia Palaszczuk is in hotel quarantine after her controversial week-long trip to Tokyo, with QLD Police quashing rumours she is in a 'three-room suite' confirming she's in a "modest" room.

The federal treasurer is banking on Australia rebounding quickly from the economic impact of lockdowns in NSW and Victoria to avoid another recession this year.

But Josh Frydenberg also says it's too early to tell if that will go to plan, warning the path to recovery will be through high vaccination rates.

"Given the lockdowns across our two biggest state economies, NSW and Victoria, it won't be surprising if the September quarter is negative," he told The Australian in an interview on Tuesday.

"As for the December quarter, it's too early to tell.

"We have seen the economy rebound strongly from prior lockdowns and have good reason to expect it will do so again. But COVID has taught us we never know what's around the corner."

Australia could be plunged into another technical recession if the economy contracts for two consecutive quarters. Mr Frydenberg noted the economy had bounced back strongly after last year's coronavirus induced recession.

World record holder McKeown is a favourite for her 100m backstroke final and teammate Mitch Larkin is also hoping to land among the medals in the 100m backstroke.

"Arnie gets it done!"

A three-time K1 world champion, Fox is yet to stand at the top of an Olympic dais, winning silver in London in 2012 and bronze in Rio four years later.

The 27-year-old enters the semi-finals as raging favourite after posting a qualifying time of 98.46 seconds, some three seconds faster than her nearest rival, Germany's Ricarda Funk.

Ash Gentle leads the Australian charge in early action in the triathlon while Sally Fitzgibbons and Owen Wright will fly the flag in the surfing quarter-finals at Tsurigasaki beach.

In team events, the Kookaburras meet Argentina in the men's hockey while the Aussie Sharks face a crunch water polo meeting with Croatia.

The Opals get their Olympic campaign underway against Belgium while the Matildas look to rebound from their loss to Sweden against the USA.

- Singapore is looking towards quarantine-free travel for those fully vaccinated by September.

- China has launched an attack on “western” media over a photo of Chinese weightlifter Hou Zhihui competing at the Tokyo Games.

The photo being used of the 24-year-old gold medal winner is of her straining in the middle of competition as she completed a lift.

Reply
Upvote
3 upvotes
If only Gladys would take a leaf out of Victoria or Sth Australia’s book. She is so stubborn and Daniel Andrews always speaks so pleasantly even when she thumbs her nose. NSW is a mess.

Reply
Upvote
1 upvotes
@gypsy It sure is. A complete failure of leadership because of pride.

Reply
Upvote
1 upvotes
@cat  Lol, I did yesterday but that’s a thought Glady could try some baking, she might have some luck there as she is failing in other areas.