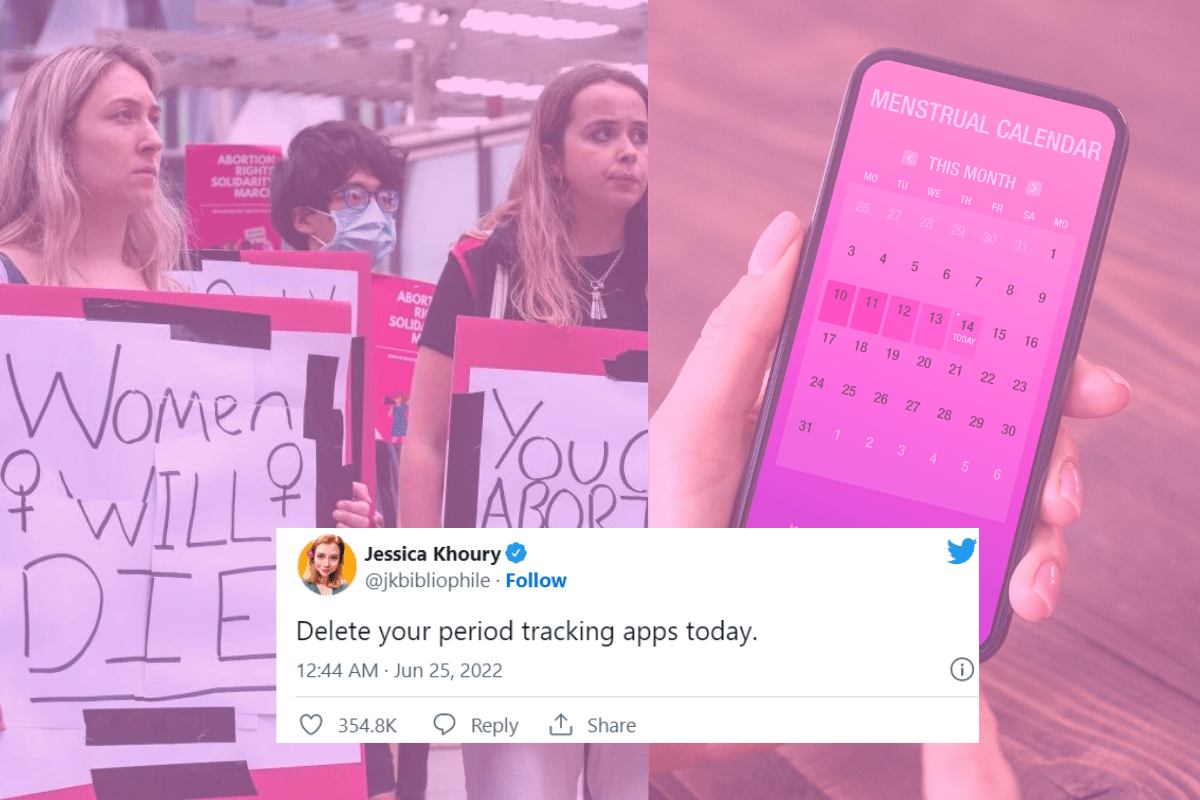 Over the weekend, the unthinkable happened in America, with reproductive rights going back a century or two.

The US Supreme Court overturned the landmark 1973 Roe v. Wade ruling that recognised a woman's constitutional right to an abortion and legalised it across the country, handing a momentous victory to 'pro-life' advocates who want to limit or ban the procedure.

The court, in a 6-3 ruling powered by its conservative majority, upheld a Republican-backed Mississippi law that bans abortion after 15 weeks. The justices who voted to overturn Roe v. Wade believed the original constitutional protection enacted in 1973 was wrongly decided.

Very soon after the overturn, eight states legislated to ban abortion in all circumstances, including rape and incest. An additional 13 states are likely to adopt the ban, while a further nine states are uncertain.

So what has this news got to do with period tracking apps you may ask?

According to women's advocates across the US, many are concerned anything and everything will be used against them if they're found to have had an abortion deemed illegal in the state it was performed in. And period trackers could play a part in that equation.

If legal cases against people who have had an abortion go ahead, then a person's search history, location data and period tracking apps could all assist the prosecution.

And if abortion is criminalised in certain states, some period-tracking apps based in the US could potentially have little choice but to share their customers' most personal data if subpoenaed.

This conversation was spurred by American author Jessica Khoury, who sent out a straight-to-the-point Tweet warning: "Delete your period tracking apps today."

The fear is in the data. When a user puts every detail of their menstrual cycle into a period tracker, that company then holds onto that very data – the stats of your most recent period, when you were ovulating, perhaps notifications from the app telling the user they have missed a period or are late.

For American women who have decided to delete their period tracking apps, they must also remember that deleting the app doesn't necessarily remove the information recorded – a request has to be made, with each company having different routes to doing so.

Ultimately, there is a low risk of data being handed to law enforcement, but it's not impossible.

Eva Blum-Dumontet is a tech policy researcher who, in 2020, published research on the privacy practices of period tracking apps. As she told Insider, users need to be made aware of the risks, saying she doesn't want to give anyone a "false sense of security".

Some of the most popular apps on the market include Flo, Stardust, Natural Cycles and Clue.

And in the wake of Roe v. Wade being overturned, many of them had to come out and give public statements on the matter, assuring users their information will be kept safe. 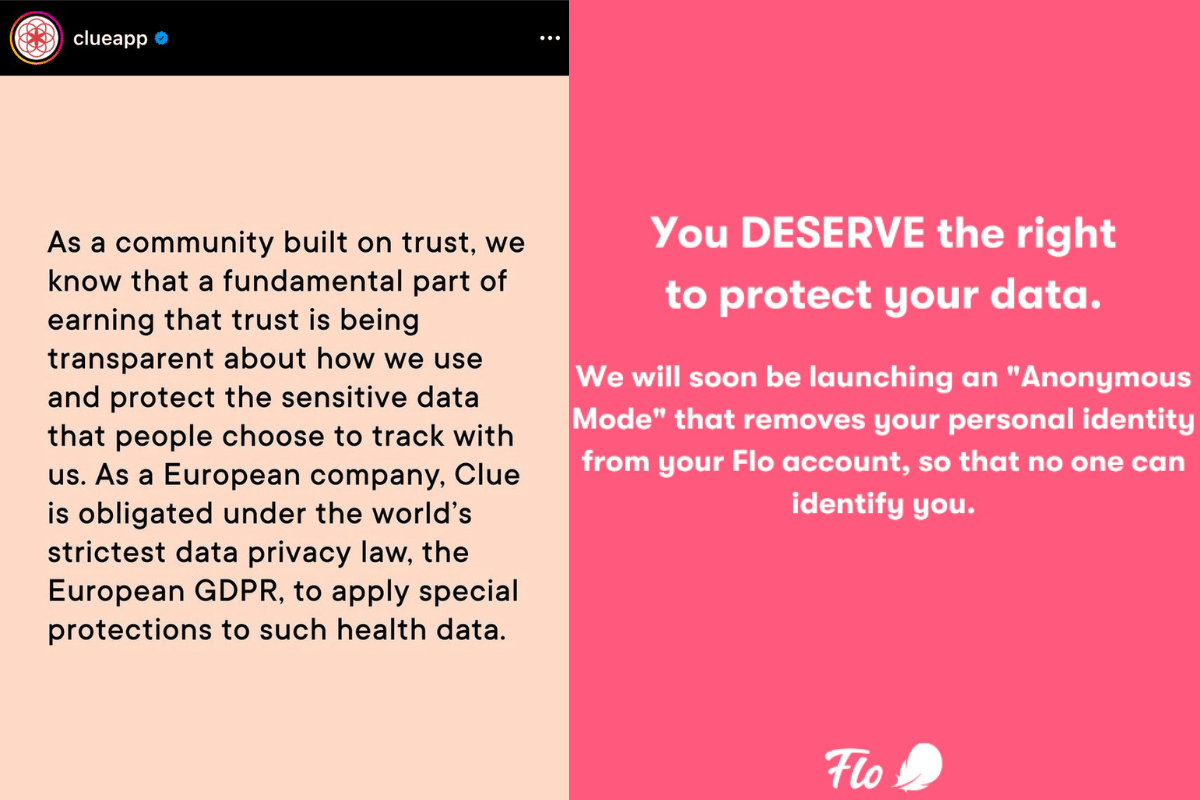 Clue released a long statement, saying they understand the "anger and anxiety coming from our US community".

"Many of us at Clue understand how it feels to fear for our reproductive autonomy. While we navigate this new reality, we promise to squarely face the challenges it brings, to listen and do everything we can to make every single Clue member's experience as positive and safe as it can be," they said.

As they noted: "If we hold your data, our obligation under European law to protect your privately tracked data is the same. No US Court or other authority can override that, since we are not based in the US. Our user data cannot simply be subpoenaed from the US. We are subject to the jurisdiction of the German and European courts, who apply European privacy law."

Stardust issued a similar statement, reinforcing their commitment to users as a "women-owned app".

As for Flo, things are a bit complicated.

They're a US-based company, and in their terms and conditions on 'how we use your personal data', it lists legal obligation as one of their conditions.

"We may be obliged to process some of your personal data to comply with applicable laws and regulations," it reads – perhaps lending itself to concern now abortion is criminalised in certain US states.

This tweet made me check my period app. Flo isn't safe. pic.twitter.com/yJHu2JXpRk

In a statement this week, Flo has urged users that they "do not share health data with any third party". But privacy isn't a new concern when it comes to period tracking apps, especially for Flo.

It reached a settlement with the Federal Trade Commission, and in this case, the Wall Street Journal found that Flo was informing Facebook every time its users indicated they had their period or were wanting to get pregnant. Flo did not admit to any wrongdoing in the settlement.

With this in mind, there has been some concern from users. Flo has since shared they are now working on a new "anonymous mode" that removes personal identity from users' data. It remains to be seen how this mode will work in practice.

They say it will be an option that "allows users to access the Flo app anonymously without providing their name or email address". Ultimately, this may be the future of the industry itself, with other period trackers also coming on board saying they will be working towards an anonymous model too.

Jackie Singh, former senior cybersecurity staffer on the Biden presidential campaign, also urged people to look further into terms and conditions, 'how we use your personal data' statements and to consider their search history. She also said to Mashable, that it's important for those seeking an abortion to keep in mind their mobile device is "essentially a tracking device".

"While most people tend to leave our Wi-Fi, Bluetooth, and location services on all the time for convenience, and rarely use a VPN or other privacy-protecting software, people who may be newly prosecuted as criminals no longer have the luxury of behaving as entirely free and lawful citizens."

So at least for now to put minds at ease, it looks like the safest way for US-based women to track their periods and cycle is to stick with pen and paper.

As one Twitter user rightly pointed out: "The difference between now and the last time that abortion was illegal in the United States is that we live in an era of unprecedented digital surveillance."