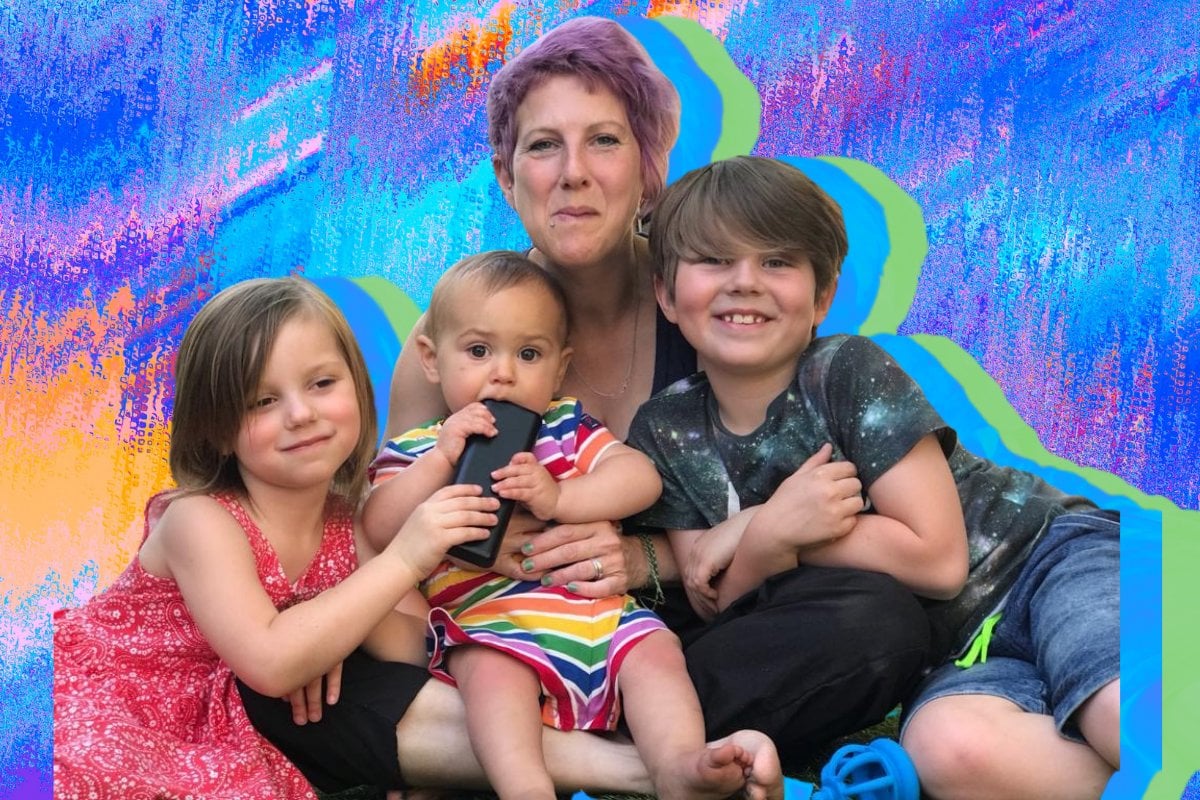 As a naturally conceived quadruplet, Rachel knew she wanted a big family. But when she didn't fall pregnant right way, she instinctively felt something was wrong.

“At first the doctors said it was unexplained infertility and we were put on a wait list for IVF. Six months later, I was excited to finally begin treatment when they tested me again,” Rachel told Mamamia.

The 35-year-old was on her way home from work when her husband rang to say she’d received a letter from the clinic. Assuming it was about starting IVF, she asked him to read it to her.

"I was completely on my own, waiting for a train, listening to Gareth say that standard IVF treatment wasn’t going to work, I would have to use a donor egg if I wanted to have a child and we would no longer be eligible for government-funded assistance," Rachel says. "I was deemed perimenopausal, literally in a letter. It was awful and we were devastated."

While Rachel had still been getting periods, her cycle had become irregular over the last few years. Still the news came as a surprise, although Rachel had always worried she might have problems getting pregnant.

"My periods started before I was 12, which was earlier than my friends, and they were always very painful. I then stopped menstruating throughout my teens and early 20s, most likely because of an eating disorder, and when I did start trying for a baby I was diagnosed with endometriosis," she says.

Doctors explained that Rachel had a low to undetectable level of ovarian reserves, but she and her husband weren’t ready to give up on having a child of their own and pressed on with hopes of IVF.

They contacted a number of private clinics and were knocked back by two of the main organisations who refused to take them on as private patients because they were classified as ‘too risky’.

Finally, they found a clinic specialising in treatment for women with low ovarian reserves that focused on the quality of one egg rather than standard IVF which works on releasing multiple eggs.

Rachel was given low doses of IVF drugs and just a 10 per cent chance of success.

“We were so anxious during the whole treatment. I was commuting to the city for work each day and once I left the medication in the office fridge and didn’t realise until I got home. We had to make a mad scramble back to work to make sure I had the injection at the right time. It was so stressful,” Rachel told Mamamia.

“Fortunately, the clinic was on my way to work so I could schedule appointments around my shifts. I was also really open with my boss about what I was going through, and he was very understanding and flexible. I think it would have been so much harder if I had been secretive about it.”

Listen to Mamamia's fertility podcast: Get Me Pregnant! Post continues below.

Convinced that the treatment hadn’t worked, Rachel booked herself in for a second round.

“I was having period pains so I thought, it’s definitely not worked. I then had to go into the clinic for a blood test and they phoned me back with the results.

“I was pregnant. I couldn’t quite believe what they were saying.”

Rachel went on to have a relatively straightforward pregnancy and gave birth to her first son, Taro, in 2012.

At six months post-partum, she went back to the clinic for a review and doctors were optimistic about her chances of another success. After waiting until their son was one, Rachel started treatment again but went through five abandoned rounds of egg retrieval. A sixth attempt managed to secure eggs, but they failed to fertilise.

“We were just told, it’s not going to work, but I didn’t want to give up on having another baby,” Rachel said, explaining that they came to a decision about using a donor egg very quickly.

“It wasn’t a difficult choice for us. The thought of giving Taro a sibling was more important than genetics, and the worry about using a donor was far less than the thought of not having another child.”

Rachel and Gareth chose to go overseas for treatment because they wanted anonymity for the donor. 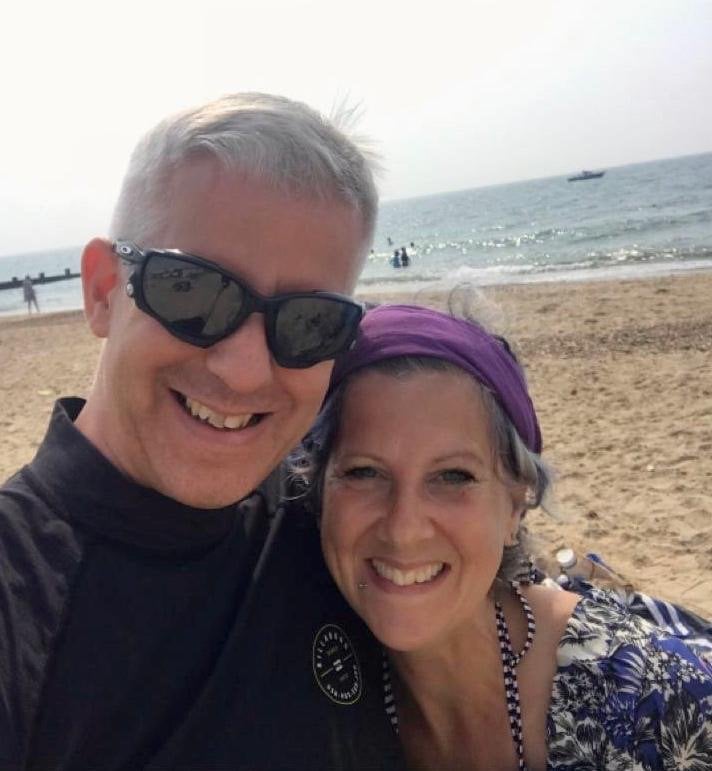 “We flew to Greece with Taro to meet the director of a fertility clinic and brought photos of our families along with us. The director then interviewed all of the donors and made a match.

“While the identity was classified, we learnt that our egg donor was Polish, in her 20s and had green eyes and a university degree.”

In Athens, four embryos were collected and fertilised using Gareth’s sperm. Two were frozen and two were transferred to Rachel while her husband and son were in the room.

“The thought that Taro was there for the conception sounds a little mad, but it was beautiful. Together we grew our family,” said Rachel.

The transfer was a success, and the couple was overjoyed to announce their pregnancy.

“I was worried that I would feel different carrying a child that wasn’t genetically mine, but I didn’t at all. As soon as I was pregnant, it became mine and I never gave it another thought.” 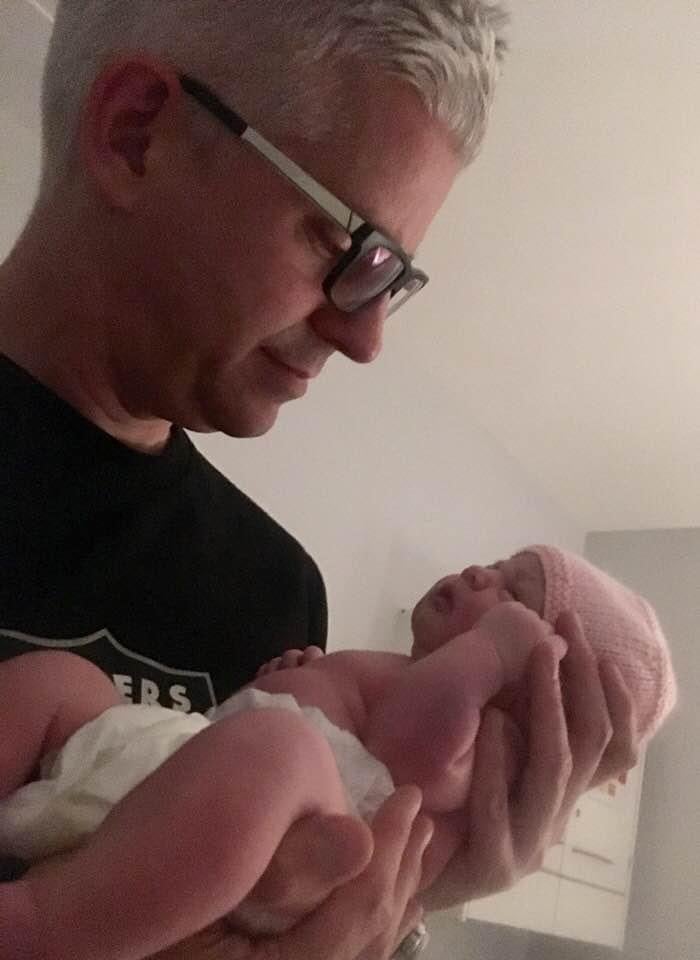 Rachel says, "This is the moment I knew Gareth had bonded with her. It was the moment they met." Image: Supplied.

That same day, the couple talked about later trying with the remaining two embryos. Three years on, Rachel flew by herself back to Athens.

“Because it had been a while, I had a hysteroscopy just to clear everything out and give myself the very best chance. Nothing was going to get in the way of me getting pregnant. The doctors also said the embryos were in excellent condition, so I just went in there thinking, wow I am going to have twins. My body is the best it can be, I’ve had a good old clear out and everything’s in perfect condition. These embryos are just top, and because I’d got lucky twice before, I just assumed my body was going to take them.”

“This is what made it worse when the transfer didn’t work,” Rachel said.

“I think a lot of people go into IVF thinking it’s an easy way of having a baby, but the odds are stacked against you. That was the hardest time because I knew Gareth was at a point where, we had two perfect children and it hadn’t worked so we should just move on, but I couldn’t. IVF is like an addiction, you think, ‘oh next time it might work, I’ll do it again’, and I just couldn’t contemplate not having another baby.”

“I’d never felt that two was complete, it wasn’t enough, and I couldn’t just get on with life so I put together a plan of what we could do. This would be our very last shot, our ultimate chance, so together we decided on an embryo adoption.”

Once more, Rachel flew back to Athens alone and two donor embryos were transferred.

“It was my way of closure. I had tried every option at that point. If this didn’t work, it wasn’t meant to be.”

But it was, and in May 2019 – 10 years into her journey to creating her family – Rachel gave birth to her third child, Circe.

It took three women and two men to make her family whole, and Rachel says the kids will grow up knowing the extraordinary lengths their parents went to to bring them into the world. 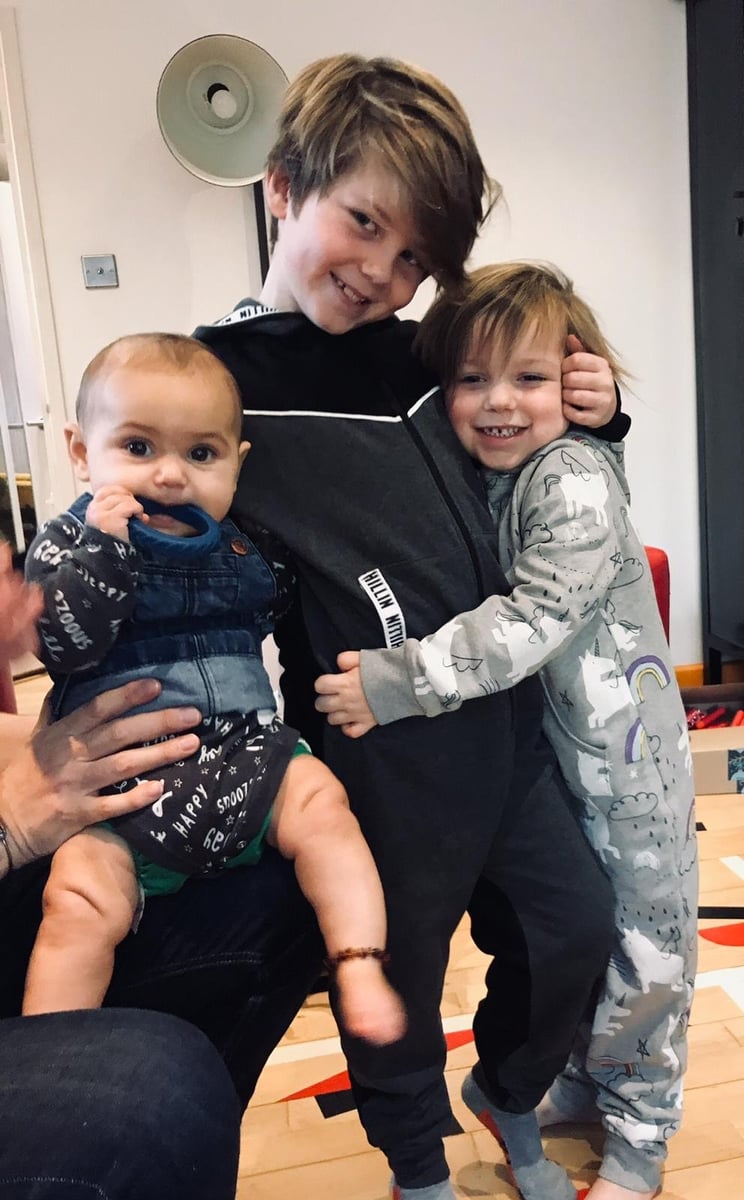 Rachel's three kids. Image: Supplied.
“We talk about it all the time because we have always been open about it. I would never want it to be any sort of shock.

Taro vaguely remembers going to Athens and often talks about the girls being part Polish, while Wren knows she was made in Greece.

"Her middle name Ekko is actually a Greek mythological name while Circe is a Greek goddess who was named after the bird, linking her to Wren. We wanted to pay tribute to their story,” Rachel told Mamamia. 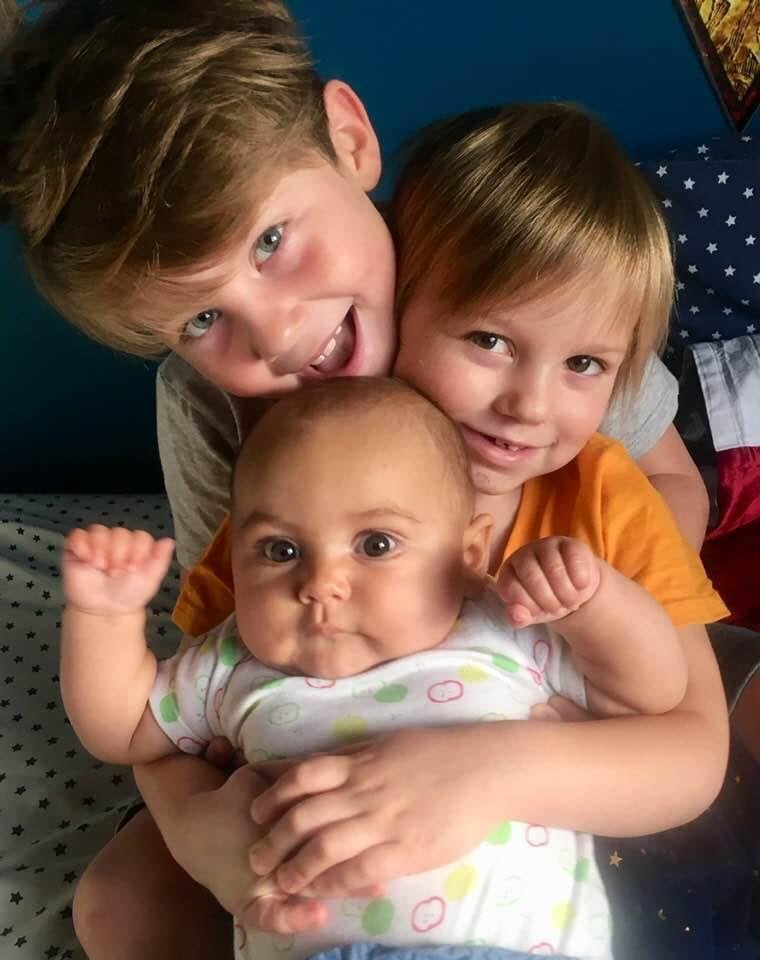 "I don’t consider anything other than they are 100% mine, and I will always float it as, you were made out of love because we really wanted you and you’re extra special for it.

"I’ve now got three unique and beautiful children and if I hadn’t done it this way, I wouldn’t have them at all."

“It’s also a lot easier explaining that to a five-year-old than where babies traditionally come from!”