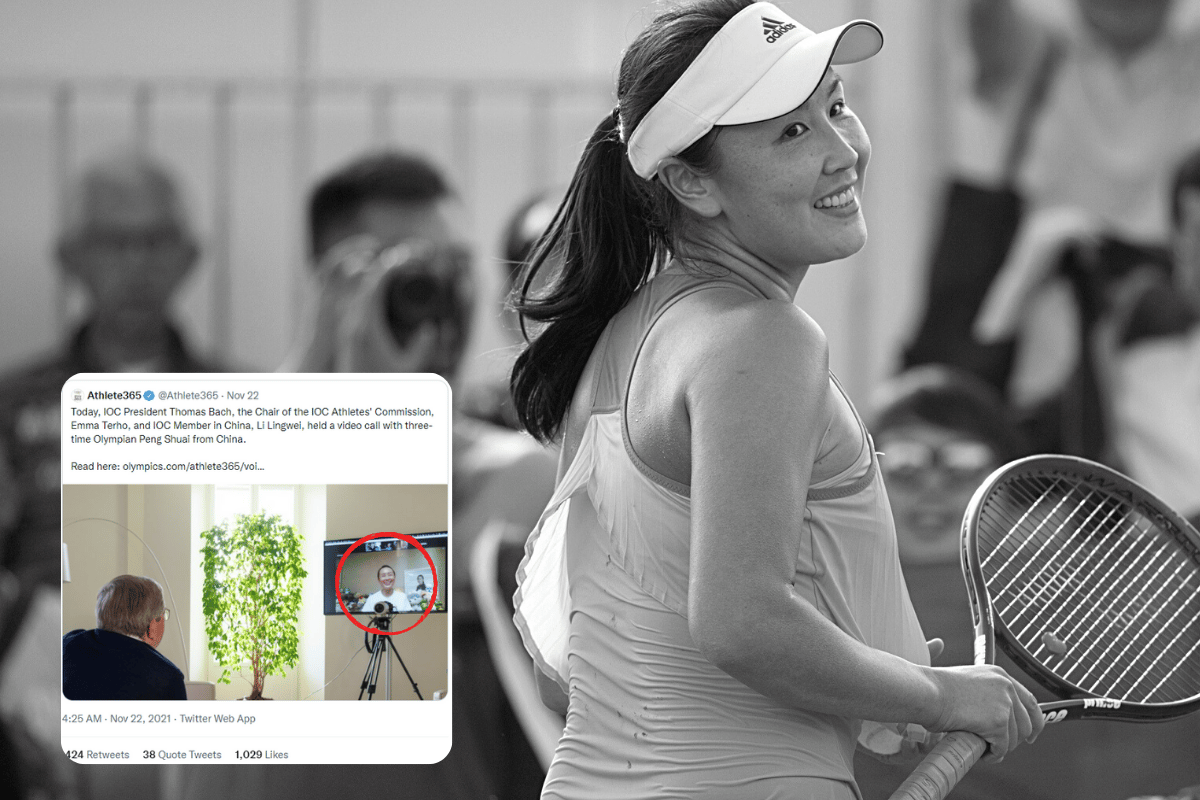 This article discusses sexual assault and may be triggering for some readers.

Earlier this month, tennis star Peng Shuai accused a senior member from the Chinese Communist Party of sexual assault. The claim was shared on Weibo but was quickly erased from the site.

The athlete, who hadn't been seen since November 2, reemerged via a number of unsettling posts and a video interview.

Concern mounted for Peng, 35, whose whereabouts remained uncertain after she claimed Zhang Gaoil, who served on the party’s Politburo Standing Committee from 2013 and 2018, coerced her into sex almost three years ago in his own home.

However, in recent events, journalist Shen Shiwei from CGTN (the English extension of China Central Television) shared pictures of a smiling Peng on Twitter.

In addition, International Olympic Committee president Thomas Bach sat down with Peng in an interview. She reiterated to the world she was "safe and well, living at her home in Beijing, but would like to have her privacy respected at this time. That is why she prefers to spend her time with friends and family right now."

The growing movement that demanded her safe return, which included the likes of Chinese feminist groups, the WTA and international tennis stars, remain unconvinced that she is safe.

What happened to Peng Shuai?

The post made by Peng was removed from China's version of Twitter within just minutes of being posted and the allegations sent the country's heavily controlled internet into an extraordinary rabbit race to take down all posts relating to the tennis star.

In it, she described having an on and off again extramarital "relationship" with Zhang, 75, for years before being invited to his home to have dinner. Their "secret" relationship, she alleges, was unknown to most people including Peng's own mother.

She went on to write that he had cut it off after he began ranking higher in the Communist Party but eventually got back into contact with Peng a little less than three years ago. On that occasion, she alleges he "forced" her to have sex with him while someone stood guarding the room.

“I know that for someone of your eminence, Vice Premier Zhang Gaoli, you’ve said that you’re not afraid,” Peng wrote in her post. “But even if it’s just me, like an egg hitting a rock, or a moth to the flame, courting self-destruction, I’ll tell the truth about you.

“I never consented that afternoon, crying all the time."

Weibo's moderators scrambled to control the discussion surrounding the communist party member and Peng, including scrubbing searches of her name and reportedly the word 'tennis' too. 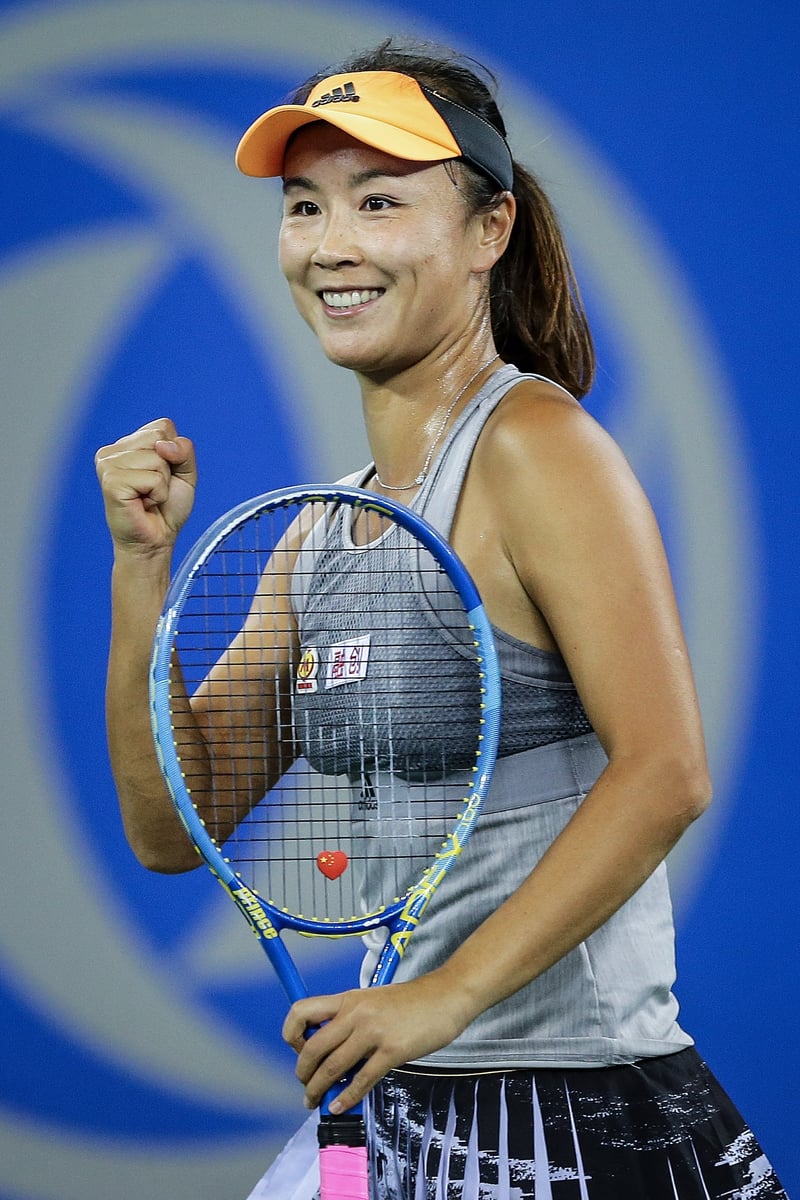 The world had yet to lay eyes on Peng, who had been missing since November 2. Until this weekend.

She was supposedly still 'online' on Weibo, and had sent an email to the Women's Tennis Association in China - yet many believe it had never been written by her, including WTA chief executive Steve Simon.

"The statement released today by Chinese state media concerning Peng Shuai only raises my concerns as to her safety and whereabouts," Simon said.

"I have a hard time believing that Peng Shuai actually wrote the email we received or believes what is being attributed to her. Peng Shuai displayed incredible courage in describing an allegation of sexual assault against a former top official in the Chinese government."

The statement went on to say: "The WTA and the rest of the world need independent and verifiable proof that she is safe. I have repeatedly tried to reach her via numerous forms of communication, to no avail.

"Peng Shuai must be allowed to speak freely, without coercion or intimidation from any source. Her allegation of sexual assault must be respected, investigated with full transparency and without censorship.

"The voices of women need to be heard and respected, not censored nor dictated to."

The email sent, in an attempt to reduce concern over Peng's whereabouts reads: "Hello everyone this is Peng Shuai.

"Regarding the recent news released on the official website of the WTA, the content has not been confirmed or verified by myself and it was released without my consent.

"The news in that release, including the allegation of sexual assault, is not true. I’m not missing, nor am I unsafe. I’ve just been resting at home and everything is fine. Thank you again for caring about me.

"If the WTA publishes any more news about me, please verify it with me, and release it with my consent. As a professional tennis player, I thank you all for your companionship and consideration.

"Once again, thank you for your consideration." 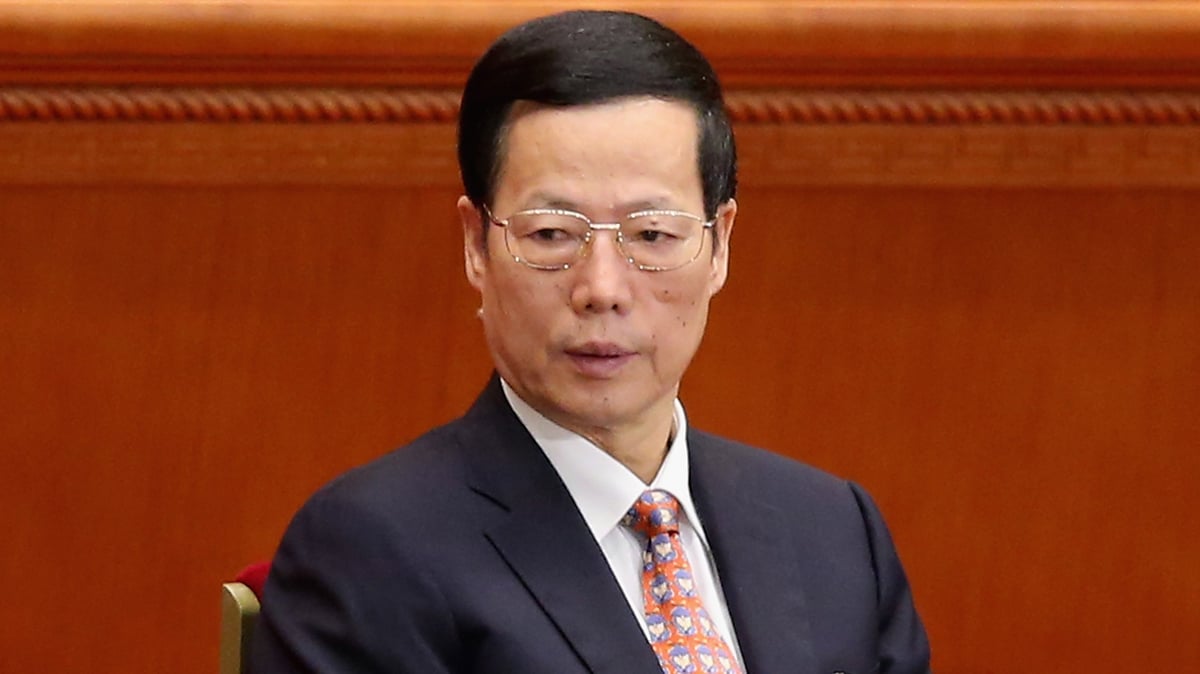 Peng Shuai says she is "safe and well".

On November 21, Peng sat down for an 30-minute call with IOC President Thomas Bach, Chair of the IOC Athletes’ Commission Emma Terho and IOC Member in China Li Lingwei

She told them she was "safe and well" and asked for privacy during this time.

In a clip posted to Twitter on November 20, Peng was video taped dining with friends at a restaurant. The caption reads: "I acquired two video clips, which show Peng Shuai was having dinner with her coach and friends in a restaurant. The video content clearly shows they are shot on Saturday Beijing time."

I acquired two video clips, which show Peng Shuai was having dinner with her coach and friends in a restaurant. The video content clearly shows they are shot on Saturday Beijing time. pic.twitter.com/HxuwB5TfBk

The response from the public has been mixed. In a statement, the WTA said: “I am glad to see the videos released by China state-run media that appear to show Peng Shuai at a restaurant in Beijing.

"While it is positive to see her, it remains unclear if she is free and able to make decisions and take actions on her own, without coercion or external interference.

"This video alone is insufficient. As I have stated from the beginning, I remain concerned about Peng Shuai’s health and safety and that the allegation of sexual assault is being censored and swept under the rug.

"I have been clear about what needs to happen and our relationship with China is at a crossroads."

Lü Pin, activist and founder of the banned Chinese forum Feminist Voices, called on those fighting for Peng's freedom across the globe to continue.

On November 21, she said on Twitter: "They disallow Peng Shuai from directly reaching people and disallow people independently checking and confirming her condition. They deny Peng Shuai the right to free speech and access to her social media accounts.

"They make no response to Peng Shuai's sexual assault allegation, attempting to pretend it never existed. They completely censor the name Peng Shuai within the GFW and strictly forbids people from discussing her experience. They have not loosened their control over Peng Shuai, as the international community has expressed concern.

"They kidnap her in order for her to 'cooperate' with their fabrications, which is another affront to her personal dignity. Although the information they release is absurd and illogical, it may have a perplexing effect, particularly on those unfamiliar with China's politics or willing to make excuses for authoritarian rule.

"As a response, we must reiterate our demands at this point:

2. End the censorship over her.

"They are aware of the pressure but refuse to stop the persecution yet. Peng Shuai will not return if we stop on our side. At the moment, the stalemate requires people to exercise wisdom, courage, and morality to break it. Please speak out more forcefully for Peng Shuai's freedom and safety until she truly returns."

Lü Pin told New York Times allegations against such a senior member of Chinese government have never seen before.

"The impact of #MeToo has been accumulating for three years," she said. "When the first women began talking about their experiences three years ago, no one could have imagined that it would reach this high level."

The alleged disappearance of Peng has evolved to become a movement capturing global attention.

On Twitter, the hashtag #WhereIsPengShuai has resulted in thousands of tweets demanding the Chinese government share Peng's location.

Some of the most well-known names got behind the hashtag including tennis stars Serena Williams, Naomi Osaka, Novak Djokovic and Chris Evert.

On Twitter, Ms Osaka wrote: "I was recently informed of a fellow tennis player that has gone missing shortly after revealing that she has been sexually abused.

"I hope Peng Shuai and her family are safe and ok. I'm in shock of the current situation and I'm sending love and light her way."

At the ATP Finals in Turin, Djokovic said he was shocked by her alleged disappearance.

“I don't have much information about it. I did hear about it a week ago. Honestly, it's shocking that she's missing, more so that it's someone that I have seen on the tour in the previous years quite a few times.

"It's not much more to say than hope that she will be found, that she's OK. It's just terrible. I can imagine just how her family feels that she's missing."

“I’ve known Peng since she was 14; we should all be concerned,” Evert wrote on Twitter. “This is serious; where is she? Is she safe? Any information would be appreciated.”

He added: “The fact that Peng Shuai is missing is not only the WTA’s problem,” said the French former doubles player Nicolas Mahut. “We are all concerned.”

Serena also took to Twitter on November 19, writing: "I am devastated and shocked to hear about the news of my peer, Peng Shuai. I hope she is safe and found as soon as possible. This must be investigated and we must not stay silent. Sending love to her and her family during this incredibly difficult time."

I am devastated and shocked to hear about the news of my peer, Peng Shuai. I hope she is safe and found as soon as possible. This must be investigated and we must not stay silent. Sending love to her and her family during this incredibly difficult time. #whereispengshuai pic.twitter.com/GZG3zLTSC6