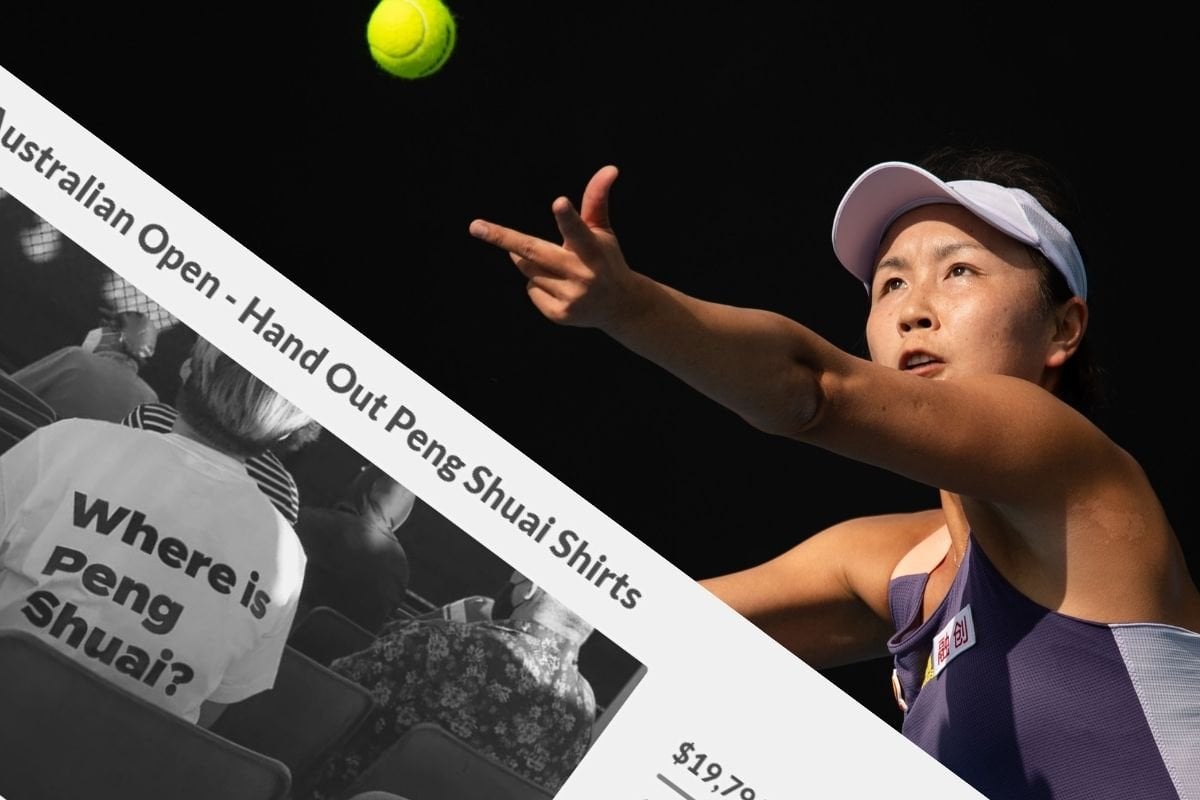 When the Australian Open women's final takes place this Saturday at Melbourne Park, there will be a question asked thousands of times over by the crowd.

"Where is Peng Shuai?"

It'll be a phrase printed on the shirts of spectators all through the stands, after a GoFundMe posed the idea.

Because right now on social media, in and around the Australian Open precinct and at after-match press interviews, there's a sideline story running concurrently to the stories about who is winning and losing at the first grand slam of the year.

And no, it's not Novak Djokovic. It's much, much more important than that.

Watch: The 'politics' of Peng Shuai. Post continues after video.

In 2020, former world No.1 Peng Shuai was at the Australian Open competing and representing her country in her sport.

Where is she now? Well, that's the problem.

After accusing a senior member of the Chinese Communist Party of sexual assault in November 2021, the athlete seemingly disappeared.

"Peng Shuai will not return if we stop on our side. At the moment, the stalemate requires people to exercise wisdom, courage, and morality to break it," Chinese activist Lü Pin said. https://t.co/WUTxBm4Emo

As concern for the 36-year-old grew, Peng took part in two video calls with International Olympic Committee boss Thomas Bach. But the IOC later admitted they couldn't guarantee she was safe.

As Lü Pin, activist and founder of the banned Chinese forum Feminist Voices wrote on Twitter, "They disallow Peng Shuai from directly reaching people and disallow people independently checking and confirming her condition. They deny Peng Shuai the right to free speech and access to her social media accounts."

In December the Women’s Tennis Association reiterated its call for an investigation into the welfare of Peng, and said the various public appearances by the Chinese star still did not address its concerns about censorship, coercion and her wellbeing.

Even after Peng went on to retract her allegation, they reiterated their fear that too was written under pressure.

Chinese tennis star Peng Shuai appears to retract her allegation that she had been sexually assaulted by a former top Chinese official, in video greeted with skepticism, Reuters reports; Women's Tennis Association continues to call for investigation. https://t.co/mrD2Fx41qg

Which brings us to the Australian Open just a few weeks later.

On Friday, spectators at Melbourne Park were asked to remove their shirts referencing the Chinese player and her whereabouts.

Tennis Australia responded initially by stating that the clothing breached its rule on “political messaging."

In a statement they said, "To ensure that the Australian Open remains a welcoming, safe and inclusive event for everyone, we have a longstanding policy of not allowing banners, signs or clothing that are commercial or political."

I get if a hotel says 'No thongs', asks you to leave and then calls the police if you don't because the police can see that you're wearing thongs. I don't think the police can look at a 'Where is Peng Shuai?' t-shirt and just as easily tell that it's a political statement. pic.twitter.com/hTmkcF7EXB

After an international outcry, however, they backtracked.

"I find it really, really cowardly. This is not a political statement, this is a human rights statement," tennis legend Martina Navratilova said on the Tennis Channel, before the reversal.

Fans are free to wear "Where is Peng Shuai?" shirts at the Open but they must not become "disruptive", Tennis Australia boss Craig Tiley said as the criticism mounted.

The Women's Tennis Association has already suspended tournaments in China due to its concerns over Peng's safety and Tiley has said TA back their stance. But the whole story gets particularly muddy when you realise how much Chinese sponsorship there is at the Open.

Back in October 2018, tournament officials announced one of the biggest sponsorship deals in the Australian Open's history, with Chinese Baijiu distillery Luzhou Laojiao, becoming an associate sponsor of the tournament for the next five years.

In 2022, that sponsorship deal is still going strong.

As all of this played out this past week, activists decided to catapult the silent protest to a whole new level.

"Sadly Tennis Australia has not taken such a firm stance in favour of human rights and basic standards of justice. In fact, Tennis Australia called police on human rights activists at the 2022 Australian Open for simply wearing shirts asking the same question Naomi Osaka, Serena Williams and fans the world over have asked: “Where is Peng Shuai?”

"Given this disappointing turn of events, my idea is quite simple. How about we present major difficulties for Tennis Australia by printing off one thousand of these shirts and giving them out for free to spectators entering the Women’s Grand Final," organiser Drew Pavlou wrote in a GoFundMe that's already surpassed its goal of $17,000.

Wow, in less than 24 hours we have raised almost $6000 to print a thousand “Where Is Peng Shuai” shirts to hand out for free at the Australian Open women’s final. @TennisAustralia good luck keeping your $25 million corporate sponsorship from China https://t.co/BN9oi6mPdl pic.twitter.com/iNiVxDrwP8

This story continues to bubble along on the sidelines of the Australian Open - a human rights concern being wrongly labelled "political messaging."

There are two stories here; one that continues to ask questions about China, Peng and her safety. And a second, pulling Tennis Australia up on its "rules."

Because if the phrase "where is Peng Shuai?" is too political, we're headed down a slippery slope.

Let's hope what transpired on Friday was just an oversight by Tennis Australia, not an attempt to confuse sponsorship with censorship.