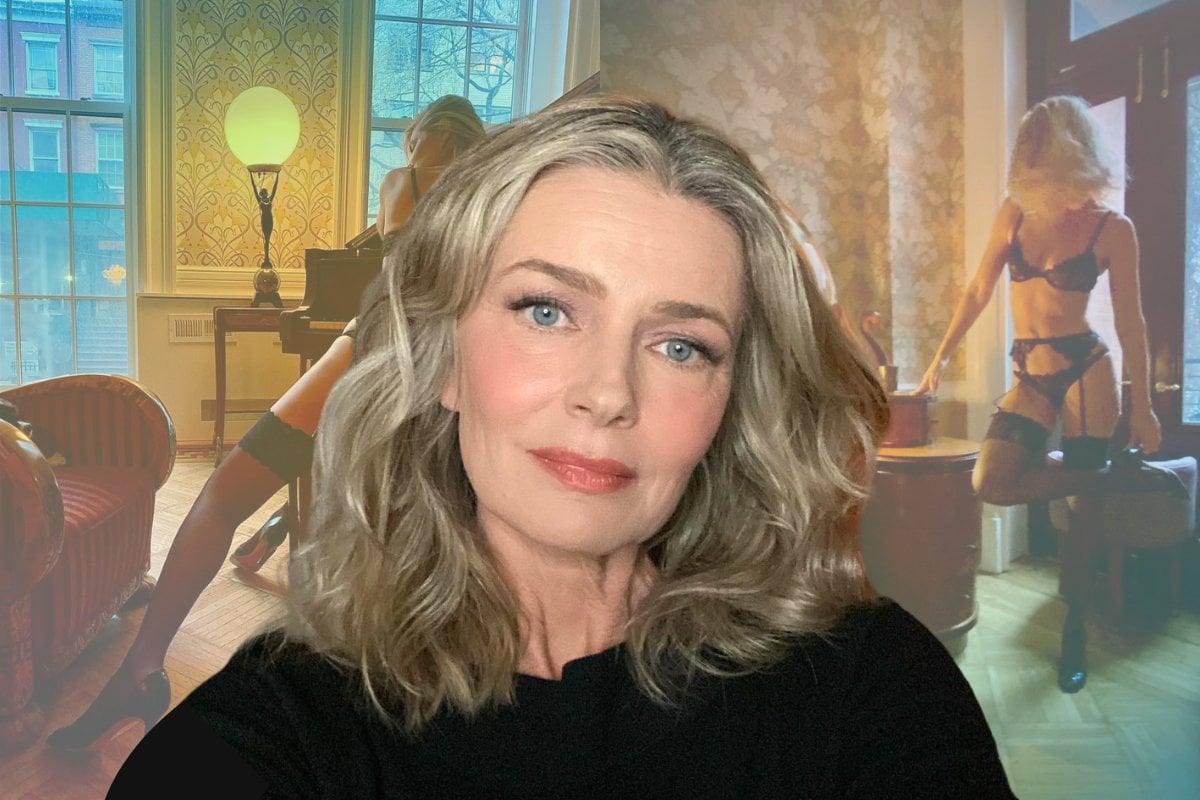 Paulina Porizkova has been wearing lingerie for decades. The only thing that's changed is the public reaction to her in it.

As one of the biggest models of her time, Porizkova fronted magazines and ad campaigns throughout the 80s and 90s. She covered the famous Sports Illustrated swimsuit issue in 1984 and 1985, posed for Playboy and appeared on the front of Vogue multiple times, making her mark in both the 'high fashion' world and the world she describes as 'cheesecake'.

Now 56, she's just posed for Vogue again, appearing on the May 2021 cover of Vogue Czechoslovakia, 40 years after she first appeared on the front of the magazine's German edition.

Wearing nothing but a sheer bodysuit, the cover is like so many before it, with one major difference: Porizkova is in her mid-fifties.

Discovered at just 15, Porizkova has spent more than four decades years in front of cameras. She used to be celebrated for her body, but as she's aged, she has noticed a shift in how people respond to her doing the same things she's always done; wearing lingerie and posing for photos.

The May issue of Vogue CZ is dedicated to time. As described by the magazine, translated from Czech; "We do not perceive time as an enemy, but as the only true lifelong companion. We seek the beauty of maturation in every moment of human life."

On her own Instagram, Porizkova thanked Vogue CZ "for daring to do this".

"For you peeps who have a problem with the lack of coverup - you can peruse the pages fully dressed," she joked.

Sharing another image from the magazine, Porizkova said she loved the photo of her "at my best, but unretouched".

"All the details of my age are here, the neck, the wrinkles, and I think I look great."

In another caption, she wrote about learning to accept what she'd long considered her biggest 'flaw', her legs.

Porizkova is regularly candid on social media about her relationship with ageing and feeling sexy in her 50s, but doing so attracts negativity.

During an appearance of The Tamron Hall Show earlier in April 2021, the model said she "spends a lot of time pondering" the backlash she receives on social media.

"In my 20s, I was celebrated for showing up in lingerie. I was getting a lot of money for it and everybody loved me," Porizkova said.

"In my 50s, I still think I look pretty good in lingerie, but the reaction is reviled, obviously not by everybody, but yeah, there's a fair amount of backlash."

She said she noticed crossing an "invisible boundary" in her 40s where suddenly, the world treated her like she was not allowed to be sexy.

"And maybe it's because you're starting to look a little like people's mum, that sexy is not allowed," Porizkova said.

Porizkova has spoken before about ageing and body confidence.

In February, she shared a naked photo of herself after feeling "inspired by the brouhaha" when Elizabeth Hurley, also 55, posted braless photos of herself on Instagram.

"When I was in my twenties and thirties, the less I wore - the more popular I was," she began her Instagram caption.

"In my forties, I could walk around practically naked and illicit nothing more than a ticket for public indecency.

"At fifty, I am reviled for it. 'Put on your clothes, grandma. Hungry for attention, are you? A little desperate here? You're pathetic,'" Porikova continued, referencing some of the negative comments she's received and hash tagging #sexyhasnoexpirationdate.

She regularly reposts negative comments she receives to draw attention to how society is uncomfortable with older women embracing their bodies and points out the double standards in ageing.

"This is the kind of crap us, seasoned women, have to deal with all the time. We're told to be grateful for getting to be older (considering the alternatives) and simultaneously we're shamed [for] daring to age," she captioned one such post.

"You're not quite sure what age you look, or you let yourself age and then you have to battle with your ego: 'OK, nobody's looking at me. People are making fun of what I look like now.' Or, 'Hey, look at this beautiful woman who turned into this hideous old thing,'" she told New Beauty.

"It makes me feel like I'm in between two worlds because I do want to be pretty and I don't want to look old, and at the same time, I would like to be seen as pretty for who I am and not for fixing what looks old. I'm really insecure about it."

She said she was envious of friends who had different careers, as they seemed more comfortable ageing than she was.

"It's not going to war every day as it is for me... I don't want to have to go to war with my looks. And I don’t want to start trying to look 20 years younger.

"My life has been all about beauty. I always had to be something very specific on the outside and maintain that because of my livelihood.

"I'm constantly battling with myself internally saying, 'Come on, beauty is not that important! Let go of being so vain and focus more on the things you can do!'"

This article was originally published on April 2, 2021 and has been updated.