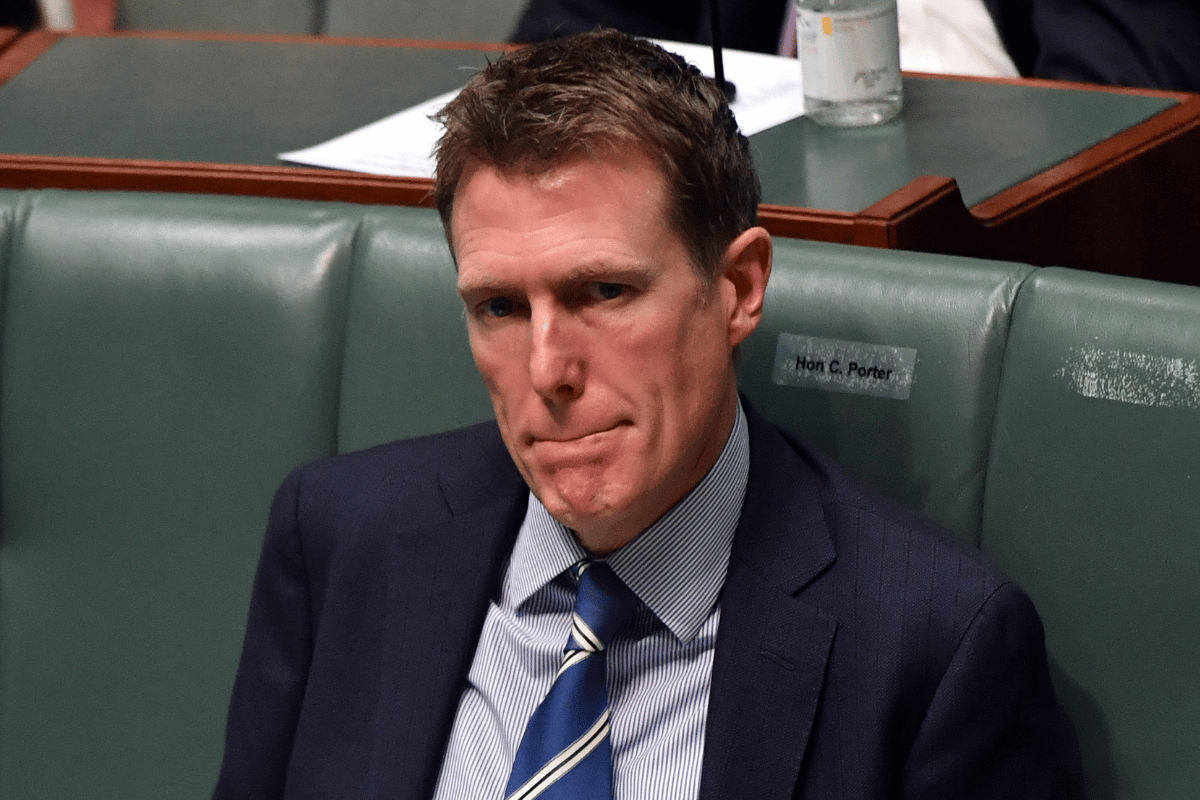 Christian Porter has announced he will not contest the next federal election, announcing his resignation on Wednesday with a lengthy Facebook post.

The Western Australian MP was first elected to parliament for the seat of Pearce in 2013. In his resignation statement, Mr Porter said there was "no limit to what people will say or allege to gain an advantage over a perceived enemy".

"This makes the harshness that can accompany the privilege of representing people harder than ever before. But even though I have experienced perhaps more of the harshness of modern politics than most, there are no regrets."

#BREAKING: Liberal MP and former attorney general Christian Porter has announced he will not recontest his seat at the next election.https://t.co/hUpjTRFXch

The announcement comes after the 51-year-old was embroiled in serious allegations for most of 2021.

After the ABC published a story about a historical rape allegation against an unnamed cabinet minister earlier this year, Mr Porter outed himself as the accused, and was then demoted from Attorney-General to industry minister.

The MP has strenuously denied the allegations, and settled a defamation case against the national broadcaster.

In September, it was revealed anonymous donors paid for part of Mr Porter's legal fees. The scandal prompted Mr Porter to tender his resignation from the cabinet, rather than publicly reveal who the donors were.

One-third of employees at Parliament House have been sexually harassed.

Federal politicians could be hit with sanctions for bullying behaviour or harassment under an overhaul aimed at making the halls of power safer for women.

It's one of 28 recommendations from a damning review finding one-third of people working in Parliament House and federal politicians' offices have been sexually harassed.

Just 11 per cent went as far as reporting it.

About a quarter of people told Sex Discrimination Commissioner Kate Jenkins' review their harasser was a politician.

One third of people working in Parliament House and Federal politician’s offices have been sexually harassed on the job. https://t.co/Uu0eQcMhT8

"Women we spoke to told us they felt lucky when they had not directly experienced sexual harassment or sexual assault," Ms Jenkins said.

Three-quarters of people in commonwealth parliamentary workplaces have experienced, witnessed or heard about bullying, actual or attempted sexual harassment and assault.

"(T)he MP sitting beside me leaned over. Also thinking he wanted to tell me something, I leaned in," one person told the review.

"He grabbed me and stuck his tongue down my throat. The others all laughed. It was revolting and humiliating."

Another person described federal parliament as a man's world with a culture of drinking and lack of accountability.

"I do often describe Parliament House as the most sexist place I've worked," someone else told the report titled Set the Standard.

Under the reforms, a joint parliamentary standards committee would be set up to develop codes of conduct for politicians and their staff.

An independent parliamentary standards commission would also be established to deal with complaints and enforce the codes.

It could make findings about misconduct and decisions on sanctions when this would not interfere with the operation of parliament.

Gender targets accompanied by yearly public reports were also called for to boost the numbers of women in parliament.

On the same day the damning report was handed down someone on the Coalition benches was accused of "growling and making dog noises" as Jacqui Lambie spoke.

in the Senate, Sarah Hanson-Young accuses someone on the Coalition benches of making "growling and dog noises" as Jacqui Lambie spoke

Penny Wong says she heard it from "that end" too but Senate President Slade Brockman said he didn't pic.twitter.com/qbnMZ3yw1y

A man has been charged with murdering his former partner who has died after he allegedly assaulted her at her Gold Coast apartment.

Police issued an amber alert when they realised her 11-month-old son was missing from the home.

Officers later tracked down the boy, who was unharmed, seven hours later about midnight.

'Dearest and most beautiful mother' dies after alleged strangulation by former partner https://t.co/rubB9Bpvqe

Marsh was arrested in Oxley about 12.30am on Sunday and charged over the assault.

He appeared in court on Monday charged with one count of grievous bodily harm and one of strangulation, and was remanded in custody.

However, Ms Benedito has since died while being treated in intensive care at the Gold Coast University Hospital.

Police upgraded Marsh's charge to murder on Tuesday morning. He was remanded in custody with the matter due to be mentioned in Southport Magistrates Court on January 31.

Victorian upper house MPs have debated the state government's pandemic legislation through the night, after some last-minute changes were made to the bill to secure the support of an additional MP.

Members of the Legislative Council continued to debate the Public Health and Wellbeing Amendment (Pandemic Management) Bill on Wednesday morning.

The bill, which gives the premier and health minister the power to declare a pandemic and enforce restrictions, is set to replace the state of emergency that expires on December 15.

"It is 5.03am. There have been a lot of questions on clause 12 so 2 hours later we have got to the first amendment to this clause. 60+ to go," Ms Ratnam tweeted on Wednesday.

Good morning (to everyone who got some sleep 🐣). We are still debating the pandemic bill (& have been sitting since 11.30am Tues).Making some progress now. Some good questions have been asked in the committee but also a lot of delaying tactics by the oppn.Still some hours to go.

In exchange for Mr Barton's support, the government made six amendments to the bill including the creation of a joint parliamentary committee that can review public health orders and recommend they be overruled by a majority of both houses of parliament.

A proposed aggravated offence, under which egregious restriction breaches could have been punishable by up to two years' jail, was also removed.

"This is a far better bill than what we had and we have curbed the powers of this government," Mr Barton told reporters outside parliament on Tuesday.

Penalties for people who don't comply with testing and quarantine measures have jumped five-fold in NSW after a woman infected with the Omicron variant of coronavirus unknowingly carried it into the community.

On Wednesday, the penalty for non-compliance with isolation, testing and quarantine requirements increased from $1000 for individuals to $5000, and doubled from $5000 to $10,000 for corporations.

Premier Dominic Perrottet says it's a necessary precaution while the world waits to find out more about the Omicron variant.

"We are well prepared here in NSW, but it is important we take the necessary steps to protect the community and adopt measures that will allow us to learn to live with COVID," he said.

The race is on to contain the new COVID variant after a woman unknowingly infected with the Omicron strain spent days in shops across Western Sydney and the Central Coast. #9Today pic.twitter.com/dkXMOE4hqN

A fully vaccinated woman aged in her 30s became the state's fifth confirmed Omicron case on Tuesday, and unlike the two cases confirmed on each of the previous two days, she had visited a number of shopping centres, supermarkets and fast food outlets on Friday and Saturday last week, after travelling from southern Africa.

The woman is now isolating at home on the Central Coast and will not be targeted by the change to penalties as she had not been required to isolate at the time she arrived.

Investigators on Tuesday found the remains in bushland near Dargo, in Victoria's high country.

"The remains are yet to be formally identified and it is expected this process will take some time," police said in a statement on Tuesday.

Police have discovered human remains in the search for missing Victorian campers, Carol Clay and Russell Hill. The remains have yet to be formally identified. @JaydeCotic tells us more. #TheProjectTV pic.twitter.com/qVJQajeukl

Police ramped up their search for the pair and zeroed in on the crime scene on Sunday after charging 55-year-old Greg Lynn with two counts of murder last week.

At the scene on Tuesday, an excavator dumped dirt on a blue tarp before forensic officers sifted through it - setting any potential bone fragments aside.

Mr Hill and Ms Clay were last heard from in March 2020 when Mr Hill, an experienced outdoorsman, made a call via high-frequency radio saying he was at Wonnangatta Valley.

Hundreds have been evacuated in Queensland from flooding, with the main street of Inglewood underwater this morning.

The Macintyre River burst its banks, hitting 11.15 metres this morning and still rising.

Inglewood has been inundated.

Floodwaters have peaked at 11.15m and are receding slowly.

The town’s 1000-odd residents are still at the local cemetery. @TheTodayShow @9NewsAUS pic.twitter.com/yOsykLo2EJ

More than 200 roads are closed across the state, and more rain is on the way tomorrow.

NSW is also in the firing line. The Bureau of Meteorology warned on Tuesday evening a "tropical airmass with abundant moisture" was in place and severe thunderstorms were likely to produce heavy rain that could cause flash floodings, damaging winds and large hailstones.

Further rain expected on Wednesday threatens to add even more water into catchments already at risk of flooding in the northern rivers region of NSW.

- Ghislaine Maxwell was "number two" in the hierarchy of Jeffrey Epstein's employees, a former longtime pilot for the deceased financier has testified at Maxwell's sex-abuse trial in Manhattan.

"Ghislaine was his go-to person to handle everything that was not business related," he told the court, where Maxwell is being tried for eight counts of sex trafficking and other crimes.

- Twitter Inc says it will not allow sharing of personal media such as photos and videos on its platform without the consent of the person.

- Australian scientists are attempting to make a pill containing many of the benefits of exercise, designed to help immobile patients unable to exert themselves at an intensity that delivers the rewards of physical activity.

Reply
Upvote
I don’t think Porter was fit for public office at all. This is a good result.
C
cat 2 months ago