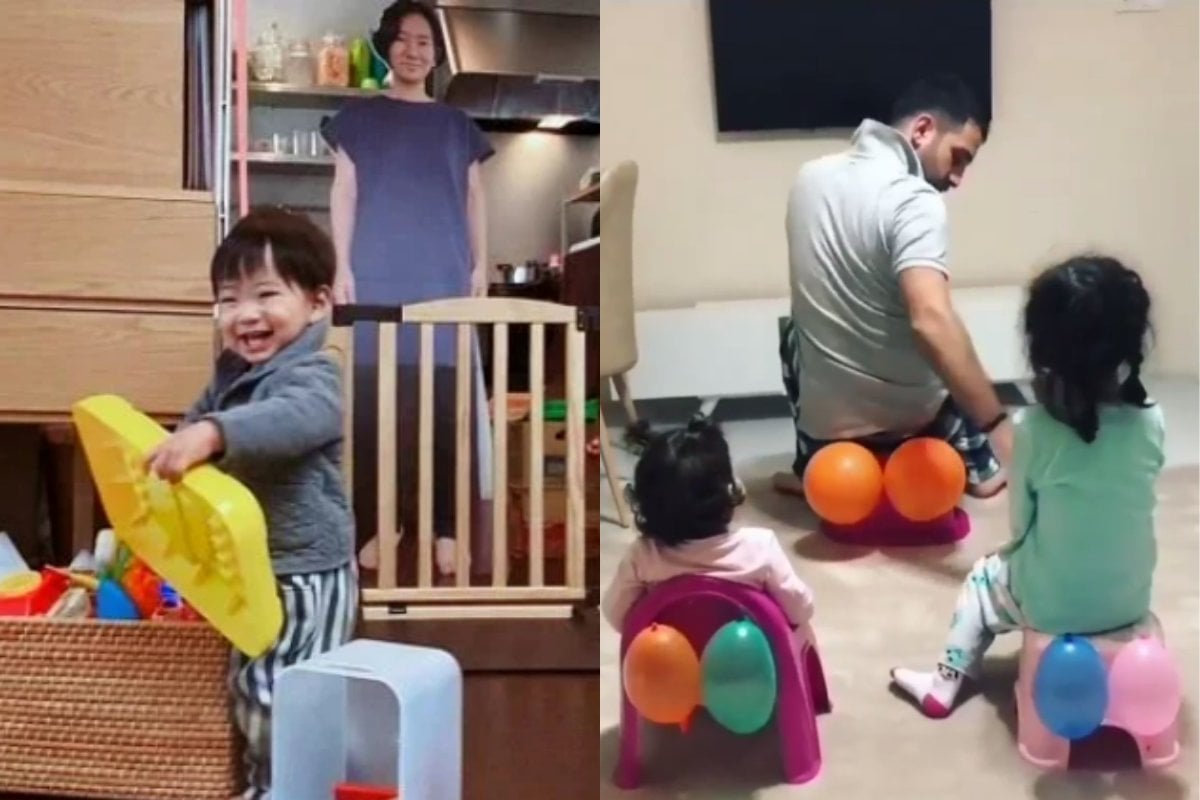 In Mamamia’s Parenting Hacks series, real women share their tips and tricks on everything from meal prep to organisation to nailing the morning routine.

This week, we asked parents to share their very best parenting hacks.

We’re all looking for quick and easy ways to keep our kids happy while getting them to do what we want them to do.

But bribery can get expensive, so hacks are the way to go... even if they’re occasionally, ahem, slightly questionable.

So we scoured the internet - and asked the parents from the Mamamia Parents group - for the very best parenting hacks.

Watch: How to get your kids to help around the house. Post continues below.

Here's what they came up with.

"My friend told her kids that no cafes in our town knew how to make hot chocolates."

"One from my mum: 'I told the girls the tooth fairy only liked white teeth, and hated yellow so they'd brush their teeth. If the fairy found teeth that weren't clean and sparkly, he'd put it back in their mouth.'"

"Told my three boys that the annual public holiday was a day off from school for washing walls. They were nearly 10 when they figured me out."

"My parents made a competition between my brother and I at dinner time. While we waited for our food, we had to sit in silence and put our hands behind our backs. Whoever didn't talk got their food first. We loved it and tried to get each other out."

"We told our kids if they tell a lie, a star appears on their forehead that only adults can see. Now, they always cover their forehead when they're lying."

"My mum is a nurse and would sometimes work on Christmas. So my parents would record the Carols in the Domain on Christmas Eve (back when you had to do so on a VHS) and replay it on Christmas Day night. That way, they'd shift the whole holiday back a day. They informed the neighbours, grandparents, and extended family of the little white lie. We three kiddos had no idea. That way, we got to spend Christmas as a family - but on Boxing Day!"

"The TV runs out of batteries, the park closes, and almost all yummy treats have either coffee or beer in them."

"My car won't start until everyone's seat belt is done up. They're 18 and 19 now and still believe it!"

"The tooth fairy only needs your first four teeth. With so many kids in the world, what would she do with all those teeth? She has no space or need for more than that."

"When my two- and four-year-old are given party bags to take home after a birthday, I go through it and pocket all the chocolate and lollies before they even realise they're there! What can I say? They’ve had enough sweets by that point and it’s my reward for sitting through horrendous kids' parties."

"If the 'M' sign is on at McDonald's, they've run out of Happy Meals."

"If the lights are turned on the ride at the shopping centre, then it's broken."

"My phone can only stream ABC kids' shows when my three-year-old is on the shopping trolley at the supermarket. I tell her it doesn't work anywhere else."

"Wiggles CDs and kids' music don’t work in the car."

"It’s too hot/windy/rainy for the TV to work!"

"We used to play Cinderella. My three girls would wipe down the cabinet faces and sweep and mop the floors."

I've convinced our 8-yo that I hate the sound of the vacuum so now she vacuums whenever she's mad at me. #ParentingHack

I highly suggest you tell your kids to help clean up. They won't do it, but they will disappear and leave you the hell alone for a few.

"I used to change the kids' birthdays to a day that suited me (shift work etc). It worked until eldest could read a calendar."

The ones that will keep them busy.

Mum of four Melissa wanted to do some grocery shopping, and her husband Michael insisted she leave the kids behind so she'd have some peace.

When she came home, she found the kids lined up on the floor, sketching their dad as he laid on the couch. Observe: 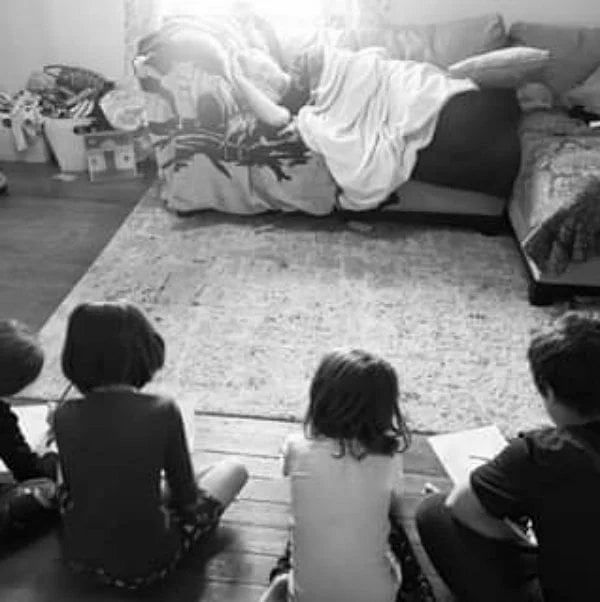 "He has them doing 'realism art' while he 'poses' aka naps," Melissa shared on Facebook of the genius move. "The winner gets a chocolate, but let's be honest, [he's] the one winning."

The activity was completely safe; she assured commenters.

"I took the pictures upon my return when all the kids shushed me because they wanted to finish their drawing... everyone enjoyed their 'art break' and Mike took some stress off my plate while resting his eyes."

Other parents shared their favourite ways to keep their kids busy, while getting things done:

My top parenting hack is YouTube dance videos. Screen time and exercise all in one 🤣 mom gets to make lunch in peace. Win win! pic.twitter.com/RVv8OAeOp0

"My personal favourite is What’s On My Butt?, which involves the kid finding household objects and putting them on my butt while I lie face-down on the couch. I then have to close my eyes and guess what’s on my butt. It’s a hit: Kids love saying 'butt', and I love naps."

Right now I'm that dad playing hide & seek with my kid so I can actually get shit done while she thinks she has the "perfect" hiding spot.

The ones that will ease separation anxiety.

If you’ve ever tried to get a crying baby into a car, you’ll likely know ~the struggle~.

Aussie mum Teagan came up with a brilliant solution, issuing a PSA on the Mamamia Parents Facebook group that frankly deserves some sort of parenting initiative award.

"My baby would scream as soon as I put him in the car and not stop until he was back out again," she shared of her all too familiar plight.

"A blown-up photo of your face. I found this one from about 15 years ago; it has worked 100 per cent of the time for us, all he needs is his mama’s face smiling at him and he sits quietly looking at it, talking to it, or falling asleep. If this car nightmare sounds familiar to you, this is worth a go!" 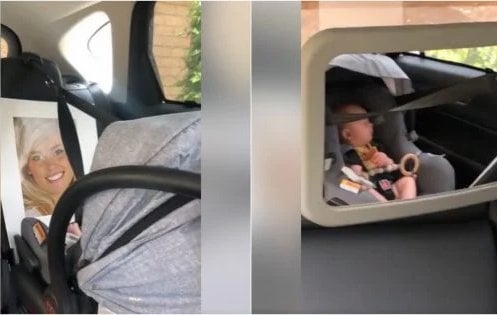 Meanwhile, Japanese mum Fuki Sato knew her one-year-old son would cry as soon as she was out of his sight.

So she and her husband Neji made some life-size cardboard cutouts of her, in different poses, and placed one near their son. Then Fuki went off to go about her business. 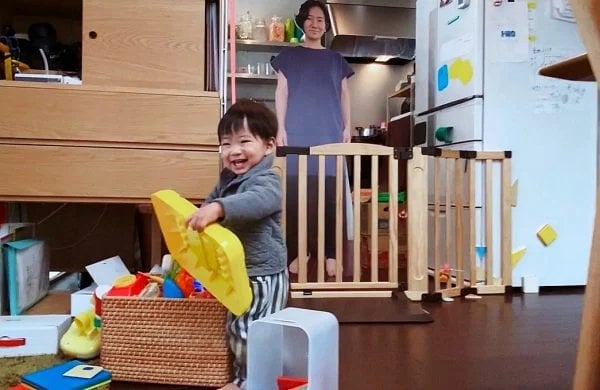 "As a result, it is not noticed for about 20 minutes," Neji wrote of the clever idea on Twitter.

Like the cutout mum hack? Here’s a less expensive version:

"I used to put a rubber glove filled with rice on my second-born infant’s belly once he was asleep so he thought I was still there."

The one that will stop them from crying.

This is the ultimate parenting life hack to stop your kids from crying... 👏 pic.twitter.com/navCbXDu9s

The one that will get your kids to bed.

Many parents had tips for getting their kids into bed and sleeping:

"I used to change all the clocks around the house forward an hour to get the kids to sleep earlier a few nights a week."

"I sometimes YouTube the Giggle And Hoot 'Goodnight' song and trick my kid into going to bed earlier when I'm done for the day."

"Buy them glow in the dark PJs. Tell them they have to lie really still under the light to 'charge' them. I’m not even sorry."

The one that will make them behave.

"We have told my daughter that the security alarm sensors throughout our house are Santa Cams."

Parenting hack: turn everything into a race. My 4yos both just got dressed in under 50 seconds.

"When I was younger, my older brothers told me that the little black willy wagtail birds were Santa’s spies - for YEARS I believed it! I now tell my children the same thing!"

Convinced our 5y son his ears turn red when he lies. He either covers them, or changes his story to the truth. #parenting #ParentingHack

The one that will teach them hygiene.

One Instagram user shared their technique for teaching toddlers how to wipe their bums with toilet paper by using balloons.

The one that will save you from cooking dinner.

If you wait long enough to make dinner, everyone will just eat cereal.

#parentinghack If you call it "playing restaurant," your kid cooks for you!

You can catch up on our previous Parenting Hacks articles here:

Do you have an unethical but effective parenting tip to share? Let us know in the comments below.

H
honni a year ago

Reply
Upvote
2 upvotes
I use to tell my kids that all the grey haired people in the shops were santas elves spying on all the kids making sure Santas naughty and nice list was up to date. Worked a treat. One day my son asked a man at the Post Office if this was true and the lovely old man looked at him with all seriousness and said yes that he was posting his report to santa. I wanted to hug him♡
K
Kym 2 years ago

I use to send my kids out to collect rocks so we could make rockbuns. Kept them out of the kitchen until I finished. If they came back to soon I would tell them the rocks they collect were too big/small and they had to try again. Worked for years.