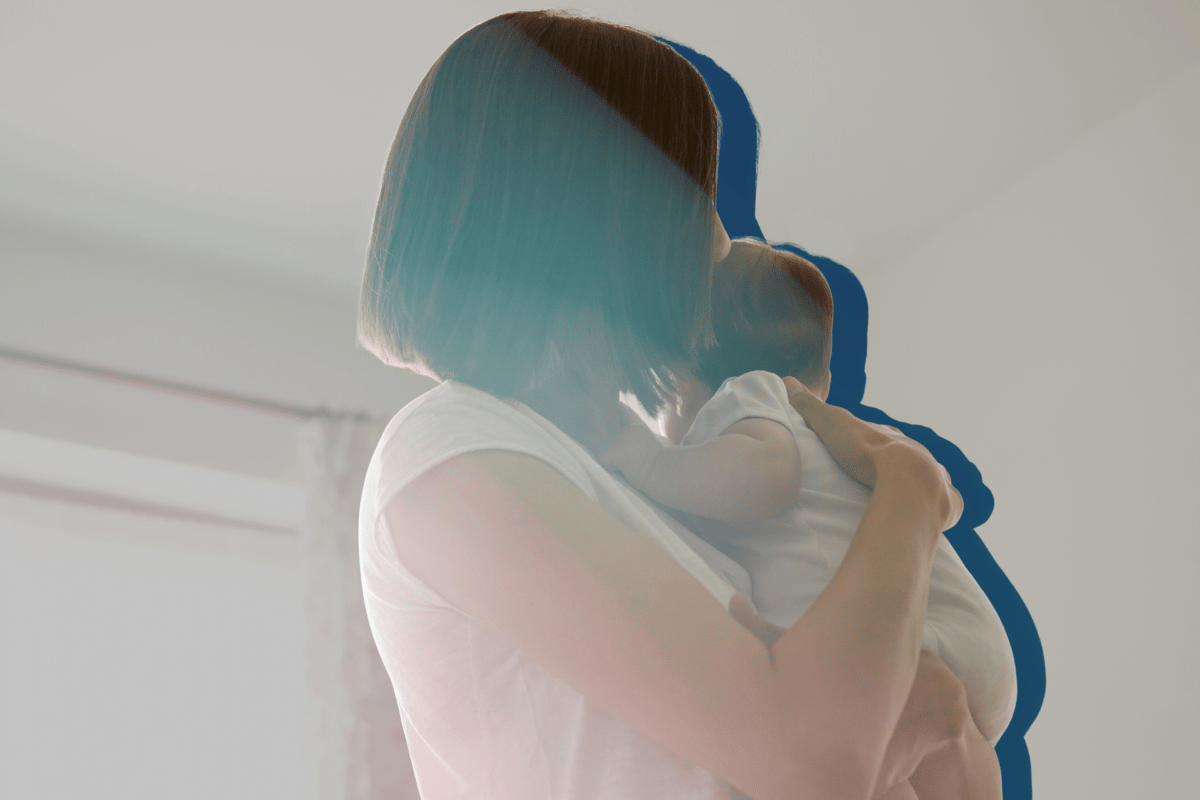 My head spun. I was still recovering from a health issue that had seen me in hospital for the week and now everyone was talking to me at once. My husband, toddler, and my oldest all wanted separate things. Wanted to be heard.

I felt my brain snap. Heard an audible ping. I ripped off my top and screamed. It had finally happened. The stress had broken me. I ran to my room, still topless and screaming.

No one followed. No one came to check on me or ask if I was okay. When I emerged a few hours later, calmer and having dressed and composed myself, no one mentioned the incident.

I felt embarrassed and shocked that I’d done something so extreme and bizarre. But both, it seemed, had become normal in our house.

A few months later, my husband had his own extreme, bizarre moment. It became just one of many in our marriage.

Watch: Mamamia Confessions: When I knew our relationship was over. Post continues below.

I arrived home from work to an empty house. The message from my mum on the phone sounded tense, her voice tight like she was choosing her words carefully.

"Just letting you know, everyone’s over at ours. You might want to come as soon as you get home."

I didn’t bother getting changed from my work clothes and rushed over. When I arrived, my parents greeted me in the driveway.

They gathered in close and each gently held placed an arm around me. The comforting gesture scared me. "Is everything okay?" I asked, tasting bile in the back of my throat.

"Just so you know," my dad whispered. "He came over to pick up some things this afternoon. We realised he was planning on taking her."

I looked from my mum to my dad and back again, trying to work out what they were telling me.

"He was planning on kidnapping her," my mum said, her voice shaking slightly.

"Oh." They released my arms and the three of us stood in silence, arms hanging uselessly at our sides in the driveway.

After a moment, we gathered ourselves inside; I gathered my baby girl into my arms. She was happy and smiling, as if nothing had happened. To her, they’d just had a nice visit to her grandparents' house. My husband sat on the couch looking like someone had punctured his side and let all the air out.

Later that day my mum pulled me aside. "You don’t have to stay with him you know," she said gently. I got defensive and argued that everything was fine.

No one mentioned it ever again.

Dysfunctional homes don’t feel strange to the people living in them. Even years after leaving my marriage it was hard for me to realise quite how dysfunctional it had been. Then I started writing about my experiences and reading the comments. The recurring theme seemed to be: "My situation isn’t as extreme as yours but..."

Extreme? That surprised me. I write about the toxic parts of my former marriage, but I hadn’t thought of it as extreme.

But that in itself is possibly part of the dysfunction: not seeing things as they really are. Thinking "extreme" is just kind of uncomfortable. Thinking "bizarre" is ordinary.

I was at a church event the first time someone pried open the lid on this particular Pandora’s box.

I listened to the speaker talk about his marriage and how he handled his mental health issues. Sitting in the back row, the lights dimmed, I felt my stomach tense. It all sounded very familiar. He struggled with highs and lows and it certainly wasn’t easy. But they’d come through. I watched his wife nodding in the front row, her back straight and confident, her shoulders relaxed and stress-free. They’d figured it out. If they could make it work, perhaps there was hope for my marriage too.

I decided to hunt out the speaker’s wife and talk with her. I found her in the foyer after the service ended and asked if she would mind having a chat. She led me by the arm to a couch nearby and prompted me to talk.

"I guess, what I’m saying is, what do I do now?" I said, finishing my brief explanation. I’d given her a mini, slightly softer picture of what was happening at home. I didn’t want to badmouth my husband, but I also needed help.

I looked at her expectantly. This was it. This was the turning point where everything would be okay. I’d know what to do so I could have the happy marriage they have too.

"Oh honey," she said, tilting her head. She softened her voice to a motherly coo. "What you’re dealing with is something quite different."

Mamamia’s award-winning podcast, The Split, discusses how to tell when your relationship is over. Post continues below.

I saw myself, and my situation reflected back at me in her face. I hadn’t even told her the worst of it yet, in her silence, the word "abuse" passed with complete clarity.

Listening to her husband talk I’d thought, "See! My situation is normal. Other people experience this too!" But it wasn’t normal.

My situation was more than dealing with mental health issues. It was more than a bump in the road of an otherwise happy marriage. It was something quite different. It was dysfunctional and abusive, bizarre and extreme. And it was time to get out.

M
marketplace a year ago

Reply
Upvote
2 upvotes
Unless their is a court order already in place. it's not possible for a father to kidnap his own child. It's not considered kidnapping when the mother takes off either and fathers are not "baby sitters" either they have the same responsibility as the other
C
cat a year ago

Reply
Upvote
3 upvotes
@marketplace thats not true, it's parental abduction if one parent takes the child without the consent of the other, and conceals them or prevents the other parent having contact. If a mother takes off with a child the father can have a court intervene to compel her to return the child/facilitate ongoing contact.
E
elishatraill a year ago

Reply
Upvote
2 upvotes
@cat respectfully, I think you are mistaken. An acquaintance of mine went through this when she left her husband (and she left the family home - this was relevant). Her ex had her son for more than three weeks and she was told by police that unless there was a custody arrangement in place that he was in breach of, they would not get involved.
L
laura__palmer a year ago

Reply
Upvote
2 upvotes
@elishatraill This has been my experience, too. Someone I know was actually encouraged by their lawyer to keep the child after a visitation and not hand her back, as there were no orders in place. It was perfectly legal.
C
cat a year ago

Reply
Upvote
@elishatraill yes, the police wouldn’t arrest them at that point, but the mother could apply to the courts for an order to return the children that the police would enforce.
C
cat a year ago

Reply
Upvote
6 upvotes
This seems very concerning but there are about 5 different stories in here and Im not sure what happened in any of them. I hope the baby was okay.
R
rush a year ago

Reply
Upvote
2 upvotes
@cat right? Feels like we got half an article!
C
cat a year ago

Reply
Upvote
@cat IKR like what actually happened with the attempted kidnapping?  Seems to be an awful lot left out here
T
talezassian a year ago