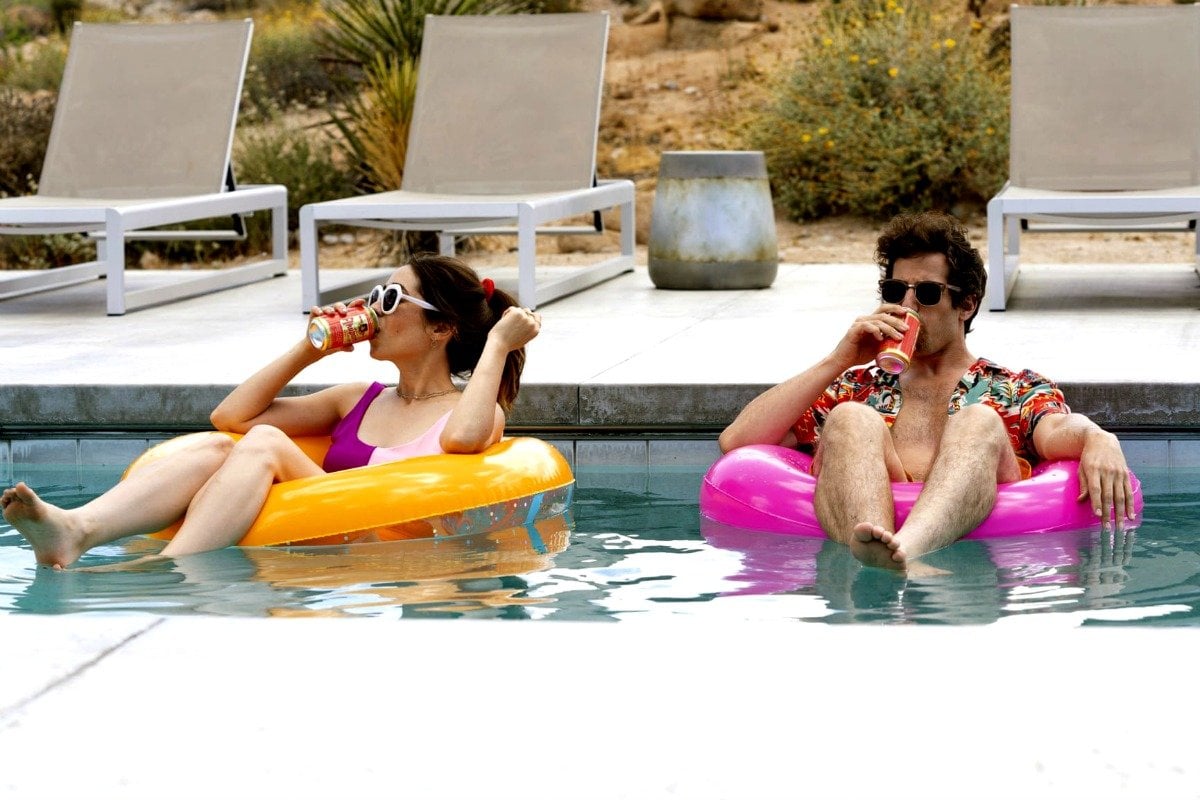 At this stage of the movie-making game, it’s pretty hard to reinvent the wheel.

Yet somehow that’s exactly what screenwriter Andy Siara has managed to do with the quirky new comedy Palm Springs.

The movie opens in the serene setting of a Palm Springs resort where wedding day preparations are in full swing.

Sarah Wilder (How I Met Your Mother’s Cristin Milioti) the self-confessed black sheep of her family is there as the Maid of Honour to her younger and much more beloved sister Tala (Camila Mendes), leading her to lurk in the corner of the reception knocking back glasses of subpar wine.

Until the moment she's caught off guard when asked to make a wedding toast and is surprisingly saved by Nyles (Brooklyn Nine-Nine’s Andy Samberg). The oddball plus one of another bridesmaid who seems strangely too much at ease for a formal event where he knows no one and is clad in board shorts and a mismatched shirt.

He also seems to be able to predict the events of the night before they happen.

Take a look at the trailer for Palm Springs below. Post continues after video.

Nyles knows the exact moment and location of where his sort-of-girlfriend Misty (Meredith Hagner) will cheat on him, who's hiding secrets (and drugs) and exactly how to woo the prickly Sarah by delivering a sincere if nonsensical wedding toast to get her off the hook.

After a few hours of wild dancing and heavy drinking, Sarah and Nyles are yanking each other’s clothes off in the desert when a masked man appears and shoots an arrow directly into Nyle’s back.

Nyles seems annoyed, although not overly surprised, by the sudden appearance of this deranged Robin Hood and proceeds to drag his injured body to a nearby cave filled with glistening lights, all the while begging Sarah not to follow him.

She of course does, and this is the moment Palm Springs kicks into wacky overdrive. 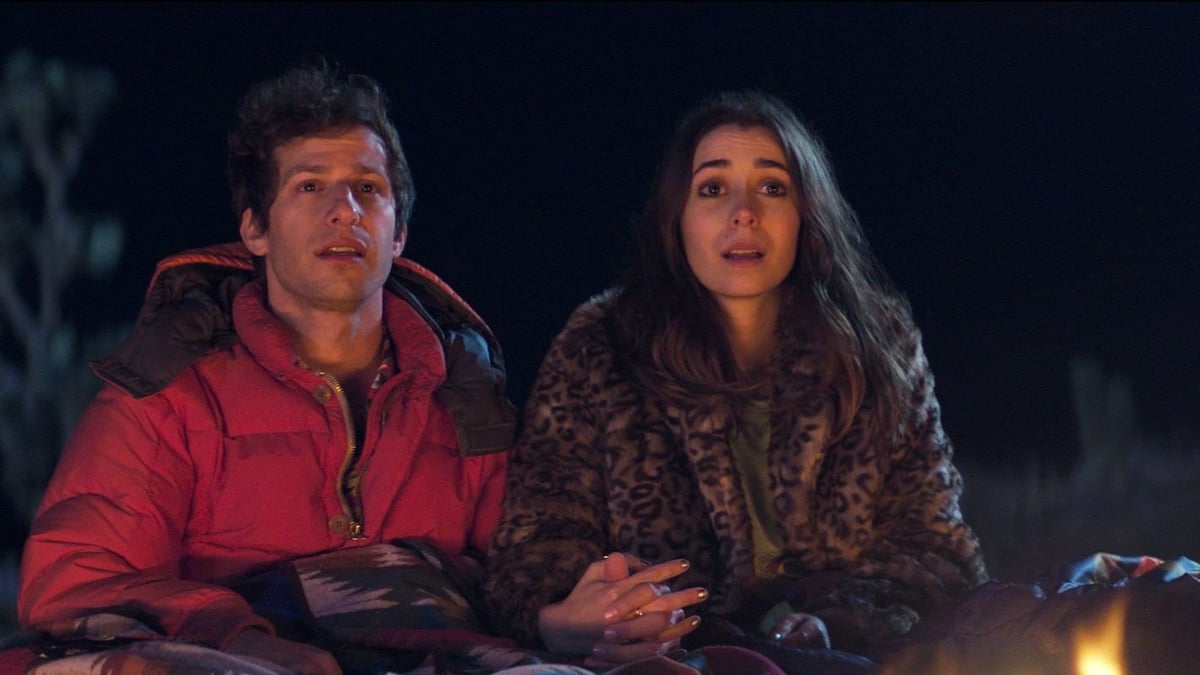 Sarah suddenly awakes back in her hotel room, wedding preparations are once again in full swing and the day has completely reset.

After a violent confrontation where Sarah (justifiably) nearly drowns him, Nyles confesses that they're both stuck in "one of those infinite time loop things" and he has already lived this day hundreds of times before and is now resigned to his fate.

Time loops have become a storytelling staple on screen since the success of Groundhog Day with movies such as Edge of Tomorrow, Happy Death Day and Triangle using it to good effect.

Yet somehow the premise feels fresh and smart here in the haphazard world of Palm Springs and soon Sarah is making the most of a life with no death and no consequences. Embarking on a series of crazy benders with Nyles who slowly starts developing feelings for his new companion.

The kick to Palm Springs is that unlike its predecessors there's no moral or magical fix to break the cycle the characters are stuck in, no amount of making amends or becoming a better person will allow them to see tomorrow.

It's this storytelling strain that leads to the darker side of their predicament, where two broken humans are trapped in a place that begins to eat away at them, especially when it's revealed where Sarah is really waking up each day.

Cristin Milioti and Andy Samberg are a perfect comedic duo in Palm Springs with enough sparkling chemistry to make you wholly invested in their love story and enough manic energy to keep the audience engaged throughout the absurd situations the movie serves up. 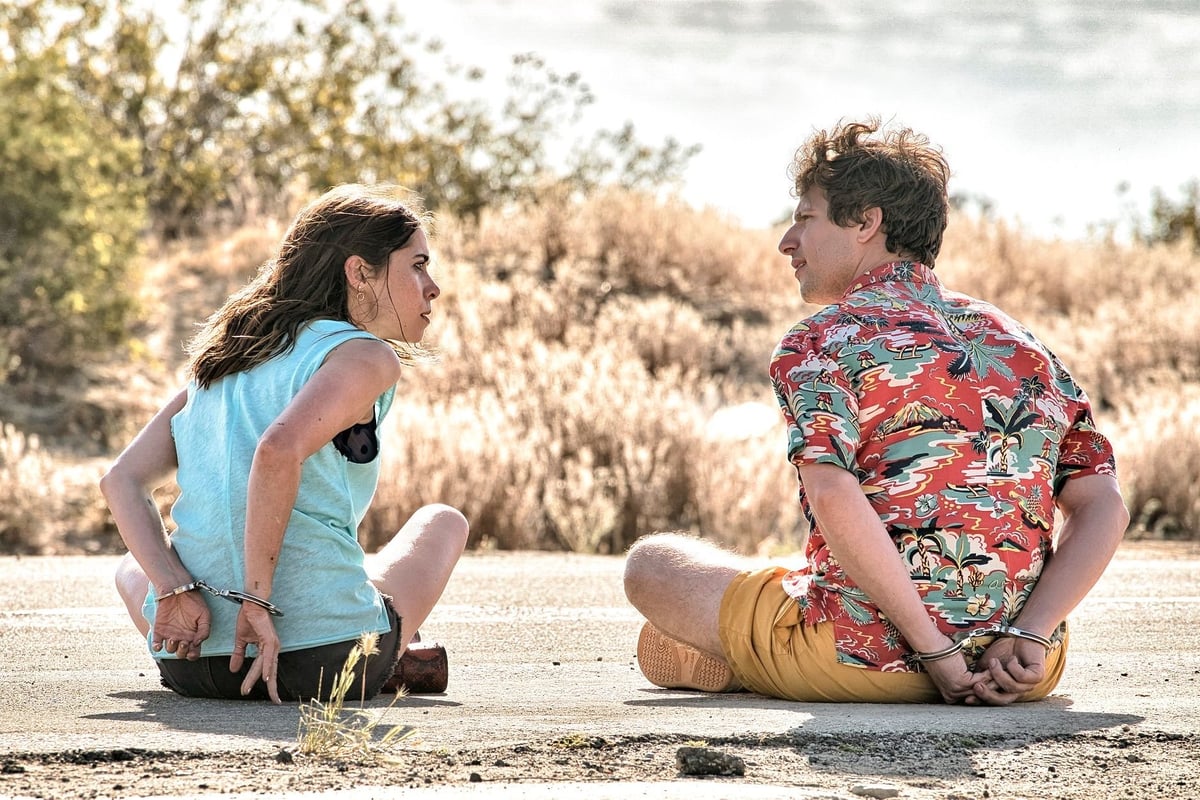 "The kick to Palm Springs is that unlike its predecessors there's no magical fix to break the cycle the characters are stuck in." Image: Amazon Prime.

Palm Springs had its world premiere at the Sundance Film Festival in January of this year and broke records for the highest sale ever of a film from the festival.

The movie then repeated its trick when aired on the streaming platform Hulu in the United States and broke the service's opening weekend record after netting more hours watched over its first three days than any other movie in the same period.

Palm Springs is a goofball romantic comedy with ample doses of humanity and heart, a cathartic movie to lose yourself in after a year like 2020.

Palm Springs is now available to watch on Amazon Prime. It is rated MA15+.