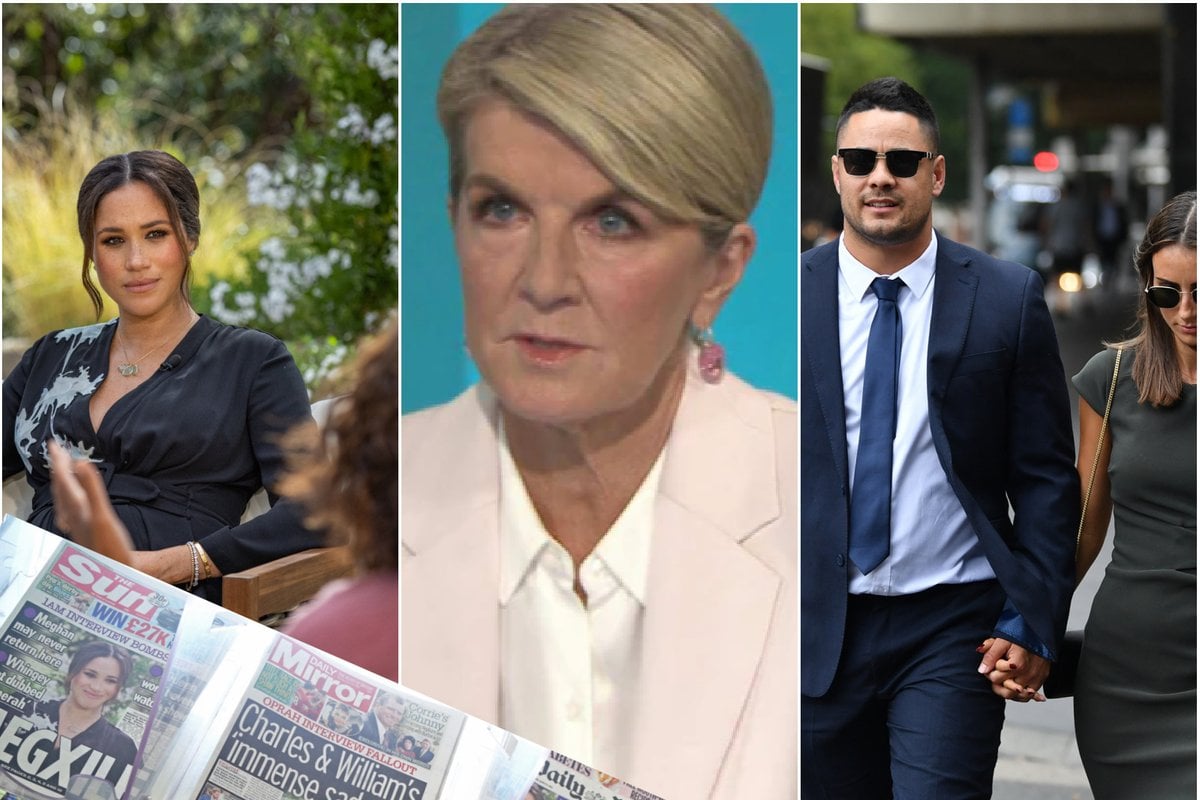 Queen, Philip not behind racist remarks.

Oprah Winfrey has said conversations about the skin colour of Prince Harry and Meghan's son Archie were not had by the Queen and her husband Prince Philip.

In Oprah's follow-up with CBS This Morning on Monday, she revealed Prince Harry had told her it was not his grandmother nor his grandfather that were part of those conversations, but he didn't tell her which family member was involved.

In the original interview, which aired on Sunday in the US, the duke and duchess of Sussex made a series of allegations against the royal family.

Meghan told the US television icon that there were "concerns and several conversations" with Prince Harry about "how dark Archie's skin might be when he was born".

Meghan Markle is opening up about baby Archie and the "concerns" that were raised about his skin color. https://t.co/NzIAQaOchX pic.twitter.com/ffFAicU4ik

The bi-racial actress declined to say who it was that had the conversations with her husband about Archie's skin colour as it would be "very damaging" to them.

She added that she suffered with her mental health during her time as a senior royal, stating she "didn't want to be alive anymore" and claimed she sought help from a senior member of the royal family but never received it.

Charles Anson, who worked as the Queen's press secretary from 1990 to 1997, told the BBC he believed there's not "a strand of racism within the royal household at all" but added the couple's comments "need to be considered".

In response to Meghan's comments about her mental health, Anson said that there is a "medical household" within the palace structure which he remembered being "very responsive" to members of staff and members of the royal family.

Buckingham Palace has yet to release a statement or comment on the interview.

A quick recap on the other biggest points if you didn't watch the interview:

Read more: "I was trapped." The 14 biggest moments from Harry and Meghan's tell-all Oprah interview.

Harry, Meghan interview seen by 17m in US.

About 17.1 million people in the US watched Oprah Winfrey's television interview with Prince Harry and his wife Meghan, broadcaster CBS says, making it one of the biggest TV events in the past year.

The UK woke up to the interview which played overnight in the US, with the newspapers splashed with headlines about the chat. 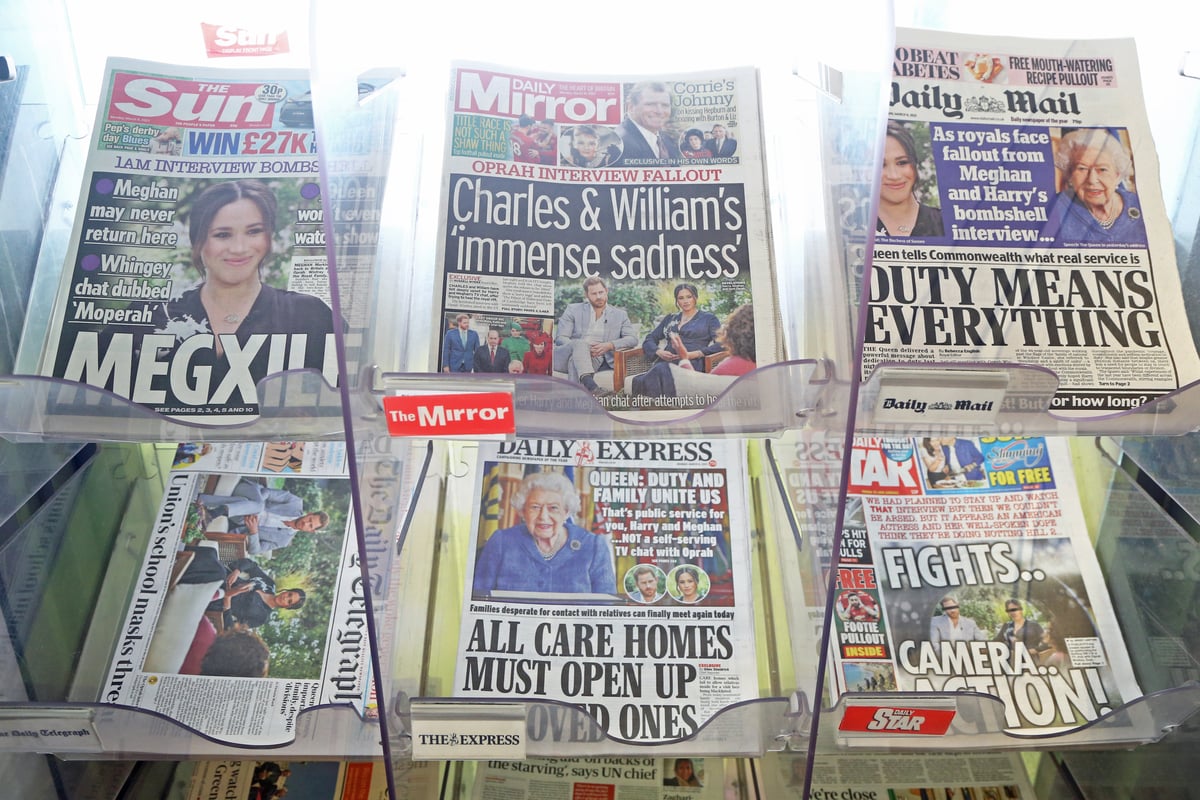 You can catchup on the interview in Australia on TenPlay.

Former cabinet minister Julie Bishop says the next logical step in the Christian Porter saga is an inquest led by the South Australian coroner.

Attorney-General Christian Porter is on leave after vehemently denying allegations he raped a woman more than 30 years ago in Sydney.

A number of her friends and colleagues told the ABC's Four Corners program on Monday night she had told them about the alleged rape and they had done their best to help her report it to police.

Friend Matthew Deeble said it had been a "great relief to her" to be able to start the police process, however her actions had been stymied by COVID restrictions. She took her own life in June.

While Labor and some of the woman's friends have backed calls for an independent inquiry into the allegations, Ms Bishop said an inquest was appropriate.

"It's within the criminal justice system. There are checks and balances and there are statutory powers," she told the ABC's 7.30 program.

"It has legal standing. And so, that is the next step and I understand from media reporting that's what the family would welcome."

The alleged rape of Brittany Higgins in the ministerial office of Linda Reynolds, shortly before a federal election was called in 2019, has also led to pressure for broader reform of political culture.

.@HonJulieBishop says she was “surprised that no one thought to inform the Prime Minister” about the Brittany Higgins case.

“In my experience, an allegation of that nature … would be brought to the attention of the Prime Minister immediately.” #auspol #abc730 pic.twitter.com/QHVtWLvqql

"There's a powerful culture within all political parties ... to toe the line, don't rock the boat, don't do anything that would damage the party's prospects," she said.

"Paradoxically, it can mean a culture develops whereby those who are prone to inappropriate or unprofessional or even illegal behaviour get a sense of protection."

Australia's remarkable streak without local transmission of coronavirus has extended as more people receive vaccinations against the deadly disease.

NSW notched up a half-century of days without a local case on Monday, while Victoria extended its run to 10 days, which is also the national mark.

While there were nine new cases in hotel quarantine, Australia continues to outperform most of the world.

As of Sunday, more than 81,000 Australians had been vaccinated, but the number is below the federal government's target.

Complicated logistics have hampered the initial speed of the rollout, which has started with frontline workers and aged care residents.

General practitioners will be part of the rollout from March 22, when older and vulnerable Australians will be able to get the virus jab from their local doctor.

When a young woman realised Jarryd Hayne had left a taxi outside her home she said there was no way she was having sex with him, a jury has heard.

But despite the then 26-year-old's protests of "no" and "stop", the former NRL star proceeded in a pushy, rough, and forceful way to remove her jeans and sexually assault her, crown prosecutor Brian Costello said in his opening address to the NSW District Court on Monday.

Re-trial: A Newcastle woman said there was 'no way' she would have sex with Jarryd Hayne after she saw he'd left a taxi waiting outside her home. | @Kim_Pratt10 pic.twitter.com/7TlaPmSLVz

Jarryd Hayne, 33, is facing a retrial and has pleaded not guilty to two charges of aggravated sexual assault inflicting actual bodily harm.

The trial is estimated to last for two weeks before Judge Helen Syme.

The NSW government has agreed to new environmental planning regulations for koala habitats, ending a disagreement which threatened to rip apart the coalition between the Liberal and National parties.

In September 2020, NSW Nationals leader and Deputy Premier John Barilaro threatened to blow up the coalition if concessions weren't made to rural property owners for protection measures over koala habitat.

The government on Monday announced that rural NSW land zoned for farming or forestry, labelled "core rural zones", will not be subject to the new Koala State Environmental Planning Policy (SEPP) 2021.

Mr Barilaro said the shift meant NSW farmers would not be "strangled by red tape" and labelled the change a win for regional interests.

But NSW Greens MP Cate Faehrmann pilloried the regulatory change, labelling it a victory for the logging industry that "sets koalas up for extinction". She also criticised the government's plan to strip councils' ability to rezone land used for primary production in an attempt to protect koalas.

"Two thirds of koalas live on private land yet this government has weakened land clearing laws so almost none of it is protected," Ms Faehrmann said.

- The trial of former Minneapolis police officer Derek Chauvin for the death of George Floyd is set to begin with the screening of jurors to weigh murder and manslaughter charges.

- US President Joe Biden will make a speech to mark a year since the coronavirus pandemic resulted in widespread shutdowns across the country.

K
kelly a year ago

Reply
Upvote
6 upvotes
Interesting, for all the worshiping of these people they are quite run of the mill humans. They can be racist, liars, uncaring, snobby and very selfish. They have learned nothing from the sad demise of Diana. When will people wake up WE ARE ALL EQUAL.
G
guest2 a year ago

Reply
Upvote
1 upvotes
@kelly Those accusations are a bit rich and can easily be applied to most people.  However,  Meghan was warmly welcomed into the family, invited to celebrations that Kate had never attended pre-engagement.   The wedding was a huge public relations success and people were genuinely happy for them.   There was genuine empathy from the Royal Family regarding the travails with her father and Prince Charles walking Meghan down the aisle was something he didn't have to do, but he did do it.     But, like with every family, there are two sides to every story and the Oprah interview was their version.
F
fightofyourlife a year ago

Reply
Upvote
1 upvotes
It would have been great to see this kind of energy from Julie Bishop when she was in Parliament. Where was this attitude when she was complaining about Julia Gillard "waging a gender war" and saying nothing about the sexist abuse she endured while in office?
C
cat a year ago

Reply
Upvote
1 upvotes
@fightofyourlife I know right? I have no love for the LNP but Julie Bishop was the best of them- what a shame that the toxic culture meant she had to sell out other women to be part of the party. And then they still ditched her for being female and chose a man who wasn’t half was capable instead.
K
kelly a year ago