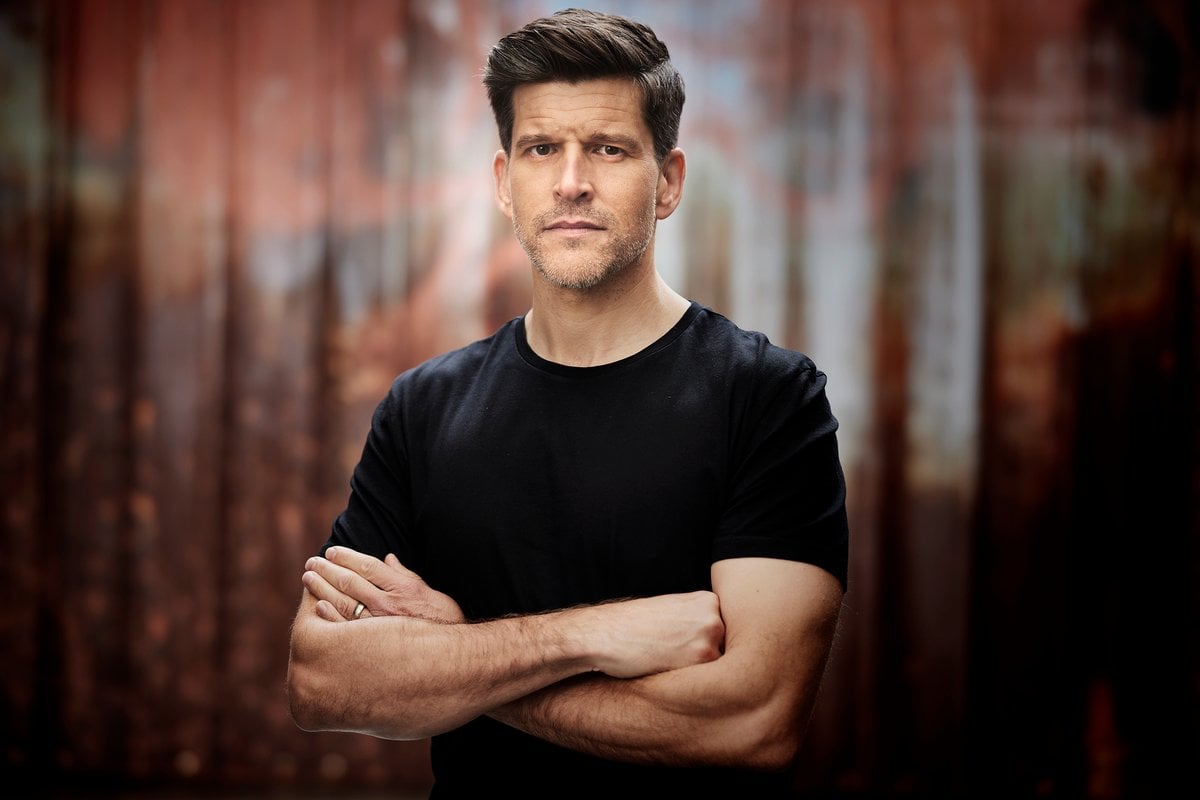 Osher Günsberg is one of Australia's most recognisable media personalities.

He's the softly spoken host whispering about roses on The Bachelor, The Bachelorette and Bachelor in Paradise. He's the sparkly suit wearing host of The Masked Singer Australia. And he's even the voice you hear when struggling swimmers are being saved by lifeguards on Bondi Rescue.

But this weekend, Günsberg will be hosting something different.

Watch the trailer for Osher Günsberg: A Matter of Life and Death below. Post continues after video.

The 47-year-old is at the helm of SBS's new documentary, Osher Günsberg: A Matter of Life and Death, which will delve into Australia's high suicide rates.

For Günsberg, it's a subject that's close to his heart.

Behind the cameras, the TV host has spent many years battling anxiety, depression, and suicidal ideation.

It's something he has long been open about.

"When I first experienced suicidal ideation, [my first thought] was, 'I need to call my doctor'. My second thought was that I needed to warn people. And I needed to talk about this," he told Mamamia.

"I'm speaking about it, and I'm the mystery rose guy or the shiny suit shouty guy from the telly. [As a viewer], just knowing that someone else understands what it is you're dealing with is a huge relief. It's massive."

Speaking to Mamamia this week, Günsberg shared he was unwell when he met his now wife, Audrey Griffen, and her daughter, Georgia.

The couple met when Griffin was working as a makeup artist on Blake Garvey's season of The Bachelor Australia.

"It was really, really hard," he said.

"I was dealing with episodes of psychosis that manifested as paranoid delusions. I was experiencing incredibly traumatising visions and really intrusive thoughts. It was horrible. I was having passive suicidal ideation constantly during the day, and I was on a lot of drugs to keep myself safe.

"It's really hard to start a relationship with someone that you really, really like when you're on that amount of meds because a lot of your emotional responses are doubled." 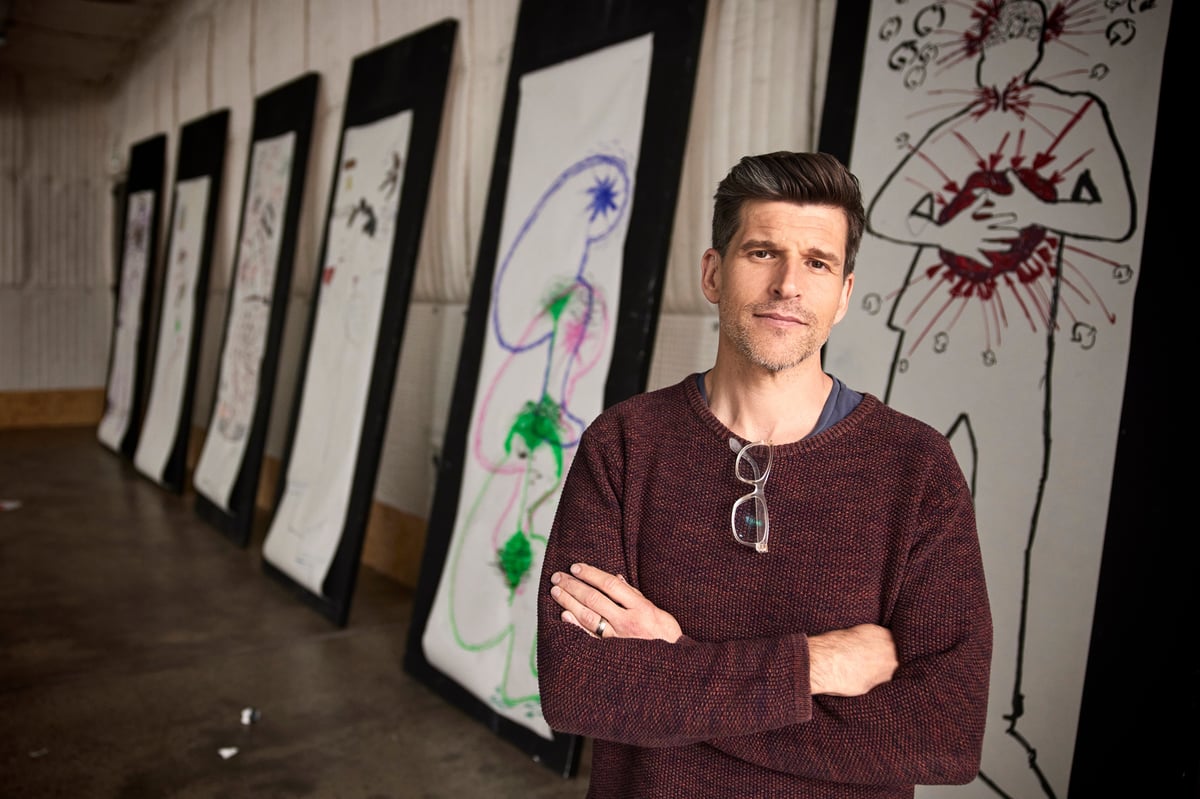 During this time period, Günsberg was also suffering from extreme climate anxiety.

"All of the things that I was afraid of were very real and happening. And they have since happened, like the Black Summer bushfires," he told Mamamia.

"But my fear response to it was completely disproportionate."

With Griffen's support, he had a drive to get better.

"Audrey was just kind enough to be able to see that I was not my sick brain, and she was kind enough to tell me, 'If all that stuff does happen, we'll figure it out.' And I was able to trust that even though my brain couldn't figure it out. I trusted this woman enough.

"Plus, I just really liked hanging out with her and [Georgia]. That was enough to be like, 'You know what, I want to be around for more of this, I want to experience more of this life with these two people.' And that was enough to push me to go and do all the things that were uncomfortable to do as far as getting better, because it's hard to get better."

In Osher Günsberg: A Matter of Life and Death, the TV host draws from his own experiences with mental illness, questioning why mental illness and suicide don't get as much attention as other causes of death.

"There are so many examples in our community of previously stigmatised health issues. Breast cancer is one of those, and prostate cancer is another. Through talking about it and de-stigmatising it, that has led to vastly superior health outcomes for not only the people who have those illnesses but the people who love them," he said.

"Similarly, I feel that's where we are with suicide."

Every day, nine people in Australia die by suicide. A further 179 people attempt to take their own lives. That’s one person every eight minutes.

Listen to Osher Günsberg on Mamamia's No Filter below. Post continues after podcast.

"We just cannot ignore the numbers," Günsberg said. "It's a huge problem."

In the documentary, the TV host investigates a number of mental health treatments, including traditional Indigenous therapies, neuro-stimulation devices, and even treatment using ketamine.

He also meets a mother who lost her son to suicide after "a nightmare" experience with Australia's medical system.

"I really hope people who make policy, particularly about what does and doesn't get covered by Medicare, watch this film," he said.

"[I hope they see] what is possible and the transformational change you can make to one person and an entire family and an entire community by investing in that person's care early on."

The 47-year-old, who has long advocated for mental health on his podcast, Better Than Yesterday, hopes that A Matter of Life and Death will provide solace to those struggling right now.

"There are two things that I hope people find from this film. One, if you're suffering or someone you love is suffering, you can understand that you're not alone. And understand that as we show all the way through the film, there are so many clever people who get up every day and all they want to do is use their incredibly clever brains to help you feel better.

"The other thing that I hope people get from this is that if someone you love is struggling, by watching this film, you might be able to understand what is going on with them better than you've ever understood before.

"And that is, I think, equally as powerful."

Osher Günsberg: A Matter of Life and Death premieres at 8:30pm on Sunday, September 19 on SBS and SBS On Demand. Osher is also host of Channel 10's The Masked Singer.