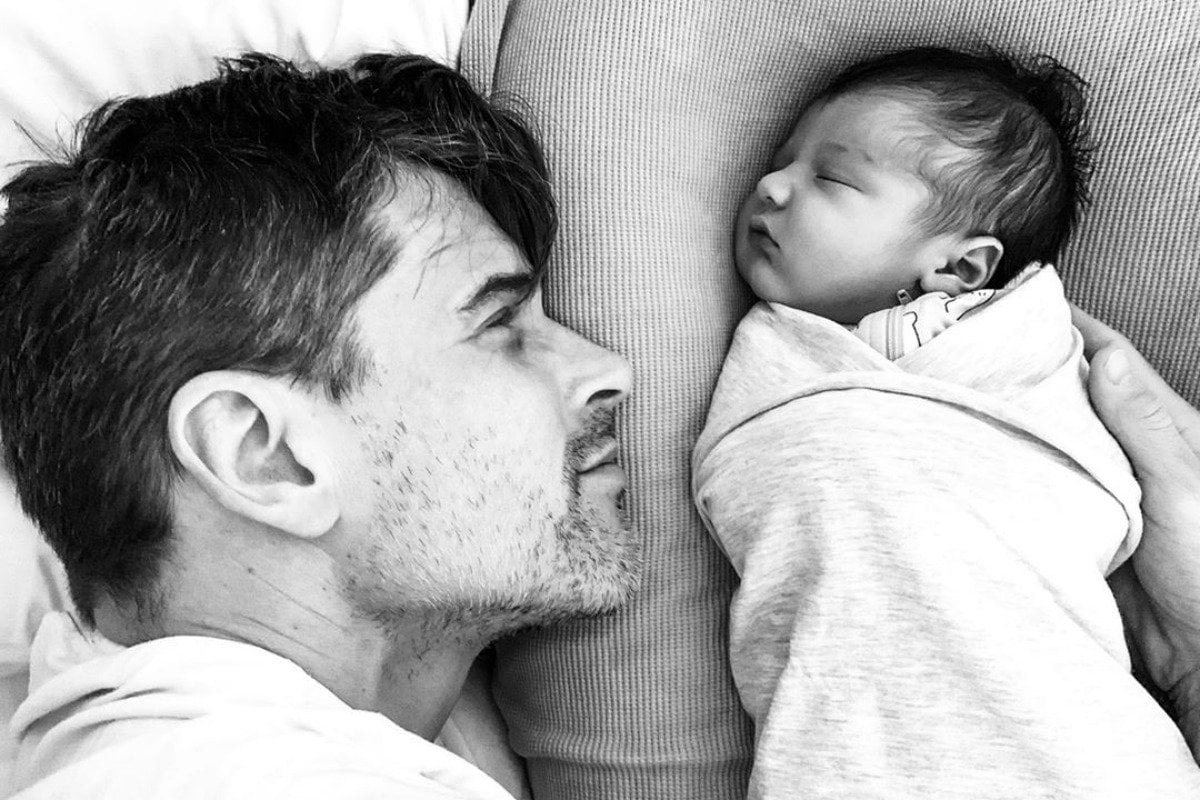 It's been just over a year since Osher Günsberg and his wife Audrey Griffen welcomed their son Wolfgang into the world.

At the time, Osher was filming the first season of The Masked Singer when he received a text from his wife that she had gone into labour. After unmasking the winner of the show, Osher drove to the hospital.

"I am in complete awe of my wife. ⁠What I witnessed her do, the power I saw her summon from within her to bring this boy into the world was utterly astonishing," he wrote on Instagram as he introduced his son to the world.

Please meet Georgia’s youngest brother, Wolfgang. ⁠ We call him Wolfie for short. ⁠ ⁠ He and @Audreygriffen did so well on Friday when he was born perfectly formed with ten fingers and toes, healthy and happy at 3.97kg.⁠ (Though between the delivery bed and the scale he did do a massive poop - and the doc agreed that if he hadn’t he would have topped 4kg easily.) ⁠ ⁠ I am in complete awe of my wife. ⁠ ⁠ What I witnessed her do, the power I saw her summon from within her to bring this boy into the world was utterly astonishing. ⁠ ⁠ As he came closer and closer, her body began to unleash an incredible energy that was absolutely not going to be held back. ⁠ ⁠ Yet Audrey was able to harness it, guide it, and use it to transcend the extraordinary pain she was feeling and channel it all towards an energy that brought this boy alive and well into the world. ⁠ ⁠ That I’ve known Audrey for over five years, and yet had no idea that within her this whole time was an almighty divine force capable of bringing life into the world like this blows my mind and was astonishing to witness. ⁠ ⁠ I can’t think of any single thing a man does in his life that physically equates to what I saw Audrey do. ⁠ ⁠ For me - any marathon or endurance event I’ve ever raced is essentially a wander to the kitchen compared to what I saw Audrey do on Friday. ⁠ ⁠ Wolfie’s big sister Georgia was in the room with us via the most perfect playlist that she made especially for the occasion - and this boy came into the world to the sounds of Kendrick Lamar, Beyonce and Khalid. ⁠ ⁠ Less than an hour after he was born, Wolfie met G for real - and she’s the best big sister he could have ever hoped for. ⁠ ⁠ We are in love and drowning in gratitude, oxytocin and new baby smell. ⁠ ⁠ ⁠ ⁠ ⁠ ⁠

Speaking to the Mamamia Out Loud podcast, Osher explained that becoming a parent for the first time to Wolfgang and a stepfather to Audrey's daughter Georgia, wasn't something he could really prepare for.

"If you wait until you're ready, you'll never be ready you just do it and I promise you, you'll figure it out. Just trust in the knowledge that a gazillion people have done it before you, so every single problem that you think you'll face, someone has already figured it out.

"Honestly, who hasn't held their newborn baby in their arms and going what have I done bringing you into this world?... Every single parent has done that and your know what? We figure it out."

But while Osher didn't prepare himself to become a dad, he did make sure he was as healthy as he could be before his son came into the world. And and the time, that involved going back on medication for his mental health.

"There was a point right before Wolfie was born where Audrey could see that it was all starting to happen for me again as far as my anxiety goes and I was starting to lose grip again.

"And she just took one look at me and said 'I'm going to need you around, go and see your doctor and get back on meds'."

Two days later Osher went to see his psychiatrist and went back on medication.

"I didn't want to go back on meds but I knew that I needed to... this is bigger than me, it's not going to be forever but I need something bigger than me to help me if I want to get out of this. And I'm bloody grateful that I did because it's allowed me to grow even more."

"If I was doing any preparation for being a parent of a baby it was like, I'm going to get my shit together. I can't wallow around in anxiety and fear anymore. I've got to face this stuff and I've got to get on top of it."

Listen to Osher's full interview on the Mamamia Out Loud podcast. Post continues below.

Osher went on to explain that he has changed since becoming a dad and stepdad.

Now, over a year later, Osher is currently in lockdown in Melbourne, away from his family. Sadly, his son had his first birthday the day he was supposed to leave Melbourne.

But despite the distance, his family are still doing everything they can to stay connected through video call. ﻿

"It's really hard. We try to have a bit of a routine," he told Mamamia.

"I'm there in the morning when Wolf has breakfast and basically anytime he's in the high chair I'm on FaceTime with them. And then I'm there for dinner and bath time and we clock on and we say goodnight."

They also watch shows like The Masked Singer together.

Unfortunately, Osher is also spending Father's Day away from his family this year.

"Happy Father’s Day to you, my love," Audrey shared on Instagram earlier today.

"Thank you for being such a wonderful Dad and Stepdad to the kids, we are all very lucky to have you loving us.
We miss you so much, and can not wait until we can be together again, but for now, we will just keep hanging out on FaceTime."

Happy Father’s Day to you, my love @osher_gunsberg. Thank you for being such a wonderful Dad and Stepdad to the kids, we are all very lucky to have you loving us. We miss you so much, and can not wait until we can be together again, but for now, we will just keep hanging out on FaceTime. Also, while I didn’t buy you any power tools this year, I think I’ve seriously upped my Dad’s Day gift game 👌🏻👌🏻

But while half of Wolfgang's life has been defined by a global pandemic, Osher says there's no point in being sad about what he's missing out on.