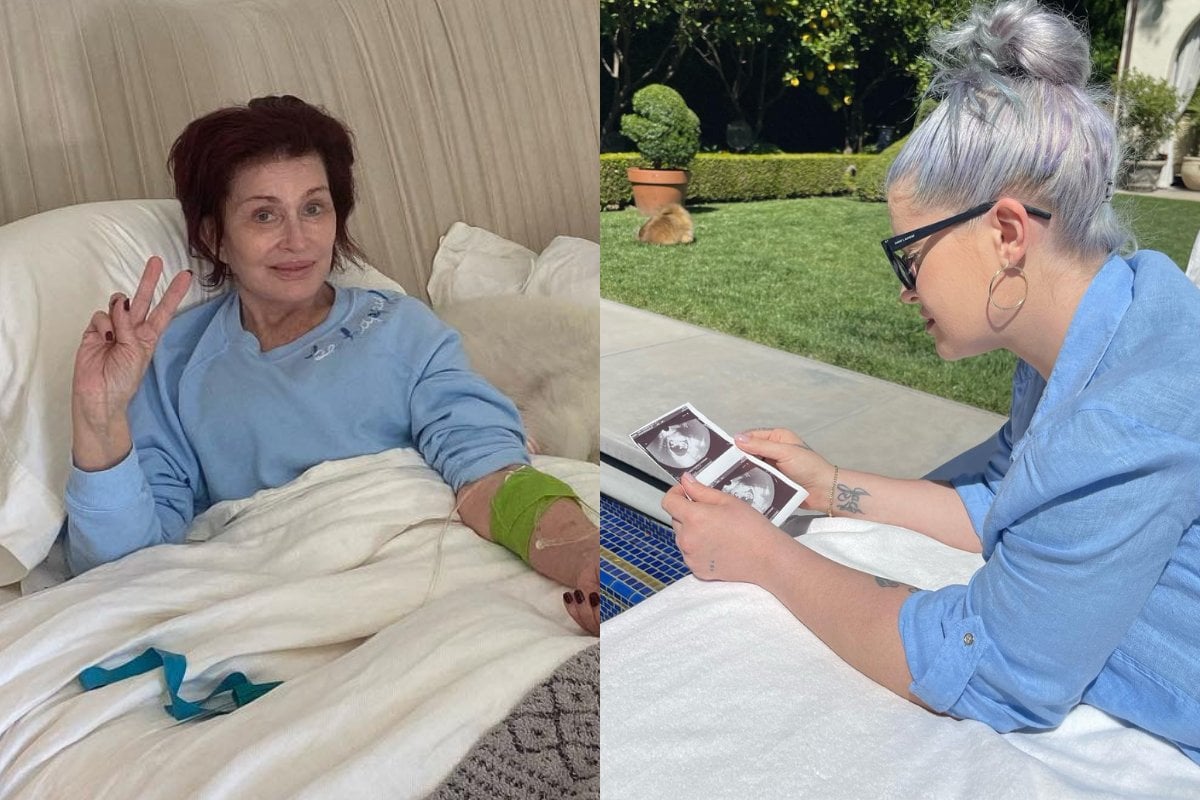 In 2002, the world was introduced to a family called The Osbournes.

They were nothing like the Brady Bunch. They were much more like The Simpsons... but with money, and open recreational substance usage.

Ozzy, Sharon, Kelly, and Jack exploded on to our screens, and were the most-watchable family at the time, thanks to their vibrant, dynamic, and interesting personalities.

The show, for which Sharon had negotiated a lucrative contract with MTV, ended in 2005.

Here's what the Osbournes have been up to since.

Many people already knew Ozzy Osbourne as part of the heavy metal band, Black Sabbath. He was a larger-than-life figure before the show, and that didn’t change. Neither did his extensive substance abuse.

As a result, Ozzy, now 73, suffers from various serious health issues, including Parkinson's disease and emphysema.

Since The Osbournes ended, Ozzy has continued to perform, even reuniting for a last show with Black Sabbath.

In 2016, Ozzy had an affair with his hairstylist, Michelle Pugh, after which Sharon left him. He then spent time in rehab for sex addiction and, still in love with her husband, Sharon took him back.

Eight months after reconciling, the couple renewed their vows in Las Vegas on Mother’s Day in May 2017.

"For me, this was actually our real wedding day. This is the one that I will remember," he said.

"Sharon and I have been through so much, and this honestly feels like a new beginning."

"We've gone two years without him catching COVID and it's just Ozzy's luck he would get it now."

In May, his son Jack said his dad is "doing well".

"I spoke to him shortly before coming in," Jack told The News Desk. "He just says hello. I’ll save the colourful language, but he says it sucks."

London-born Sharon Osbourne was the long-suffering wife on the show, and a mother who beat cancer. But now, at 69, she has an identity all on her own.

Sharon has been a judge on talent shows such as The X Factor in Britain and America’s Got Talent. (She had a much-publicised falling out with allegations of poor behaviour from both sides with singer Dannii Minogue in the fourth season of The X Factor, and then left the show.)

Nevertheless, with her popularity soaring, and audiences loving her firm but fair approach, Sharon secured her own chat show, The Sharon Osbourne Show on ITV. And later, she became one of the hosts of The Talk.

Sharon’s tumultuous relationship with Ozzy was a prominent storyline on The Osbournes. Sharon had been with Ozzy since 1979, meeting him through her father, who was managing Black Sabbath at the time. She fired her dad, began to manage Ozzy’s solo career, and was married to him by 1982.

In March 2021, Sharon shared her support for Piers Morgan on Twitter, after the British journalist announced his exit from Good Morning Britain following an on-air argument about his "trashing" of Meghan Markle.

Appearing on The Talk, Osbourne continued to defend Morgan – and herself.

"Did I like everything [Morgan] said? Did I agree with what he said? No, because it’s his opinion. It’s not my opinion. But why is it that because I supported a long-time friend and colleague of mine for years that everybody goes, if you support him, then you must be racist because he’s racist?" the 69-year-old said.

Weeks after the conversation aired, CBS announced that Sharon would be exiting the daytime talk show.

Read more: A controversial tweet and an on-screen meltdown: Why everyone's talking about Sharon Osbourne.

Kelly was a typical teenager during the filming of The Osbournes; asserting her independence continually while trying to work out who she was and wanted to be. And, yes, experimenting with alcohol and other drugs.

But after the show ended, she grew up quickly, and crafted a solid television career. She was a judge and host of Fashion Police for five years, from 2010 to 2015.

She also won third place on Dancing With the Stars in 2009, and appeared as host on various other shows such as Project Runway in 2013, and Australia’s Got Talent in 2015.

Kelly also released an album called Shut Up in 2002.

In 2019, Kelly celebrated two years of being sober.

"I woke up this morning feeling overwhelmed with gratitude," she wrote on Instagram at the time.

"I can’t even put into words how much my life has changed over the last two years. To the friends and family that have supported me on this journey, thank you. I love you all so much."

I woke up this morning feeling overwhelmed with gratitude. I can’t even put into words how much my life has changed over the last 2 years. To the friends and family that have supported me on this Journey thank you I love you all so much. If you are new to sobriety stick to it life really does get good. ????

However, after almost four years of sobriety, the 37-year-old relapsed when she began drinking again during the pandemic.

Sharing the news on Instagram in April 2021, Kelly explained, "I relapsed. Not proud of it. But I am back on track".

"This is a little hard for me to talk about, but I’ve always promised you that I will always be honest with you about where I’m at and what’s going on in my road to recovery."

She also spoke candidly about the moment she relapsed on the Facebook Watch series Red Table Talk.

"I was alone, sitting by a pool and waiting for somebody to come have a meeting with me. And I saw this woman and her husband had a glass of champagne. It looked really nice, and I was like, 'I can do that, too'," Kelly told Jada and Willow Smith.

"And the next day, I had two glasses. And the day after that, it was bottles," she continued.

"For the first two days, I could handle just having one drink, but it was because I sat there and was like, 'You're only having one drink, and you're gonna prove to everyone that you're normal now and you can do this.' And all of a sudden, everything's falling apart," she said.

During the interview, Kelly also touched on her substance abuse issues, which began when she was prescribed prescription drugs when she was 13 years old.

"I had a really bad case of tonsillitis. They ended up having to give me some crazy surgery and after that they gave me vicodin and that was all I needed," she shared.

"I went from having every voice in my head being like, 'You’re fat, you’re ugly, you’re not good enough, no one likes you, you don't deserve this, people only like you because of who your parents are,' and then all of a sudden every single voice was silenced and it felt life gave me a hug. I was like, 'Why am I so confident in all of this?'"

The TV star went on to say that she eventually went from taking vicodin to heroin.

"Then very quickly it went from vicodin to percocet from percocet to heroin essentially, because it was cheaper. I got caught buying it, and then the very next day, my mum put me in rehab."

Kelly is in a relationship with Slipknot's Sid Wilson, and this week, the couple just announced they are expecting their first child.

"I know that I have been very quiet these past few months, so I thought I would share with you all as to why... I am over the moon to announce that I am going to be a Mumma," she wrote on Instagram.

"To say that I am happy does not quite cut it. I am ecstatic!"

The couple have known each other since 1999, when Slipknot toured with Ozzfest, the music festival founded by Ozzy and Sharon Osbourne, but only recently did their relationship turn romantic.

As a teenager, Jack Osbourne also struggled with alcohol and drug addiction, and was sent to rehab on the show. But unlike his father, Jack beat his demons at an earlier age.

Fitness and health has been a major theme in Jack’s life. In June 2012, he announced he had relapsing-remitting multiple sclerosis, after experiencing symptoms for years - including blindness in one eye, numbness in both legs, and problems with his bladder, bowel, and stomach.

While appearing on Dancing with the Stars in October 2013, Jack wrote on Facebook that performing was manageable, and he hadn’t been experiencing "any severe symptoms other than the odd bit of tingling down my leg and the occasional bout of fatigue".

Jack has other reasons to want to look after himself as best he can; his three children with former wife Lisa Stelly: Pearl Clementine, Andy Rose, and Minnie Theodora.

The couple separated in 2018 before finalising their divorce a year later.

This article was originally published on October 5, 2019, and was updated with new information on May 13, 2022.