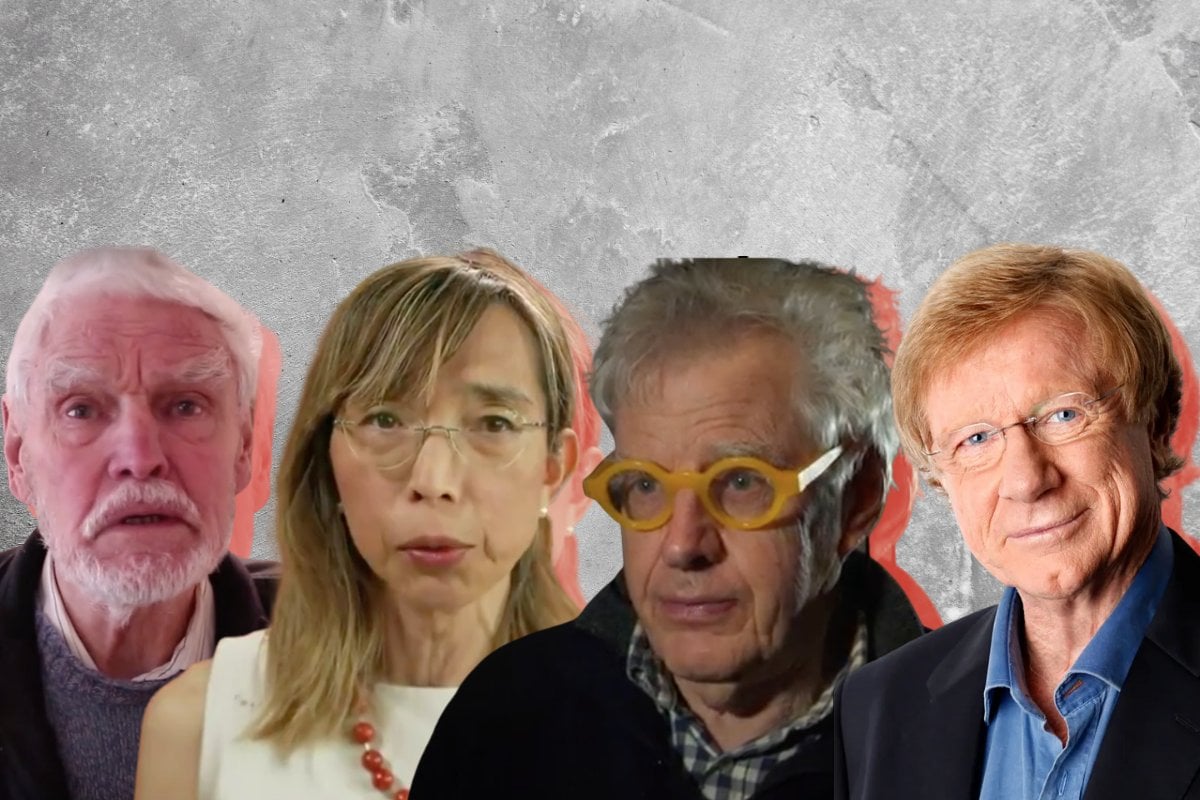 Four people have now handed back their Order of Australia accolades because they can't reconcile keeping them, while sharing the honour with someone they feel should never have received it.

Artist Peter Kingston, who is famous for his landscapes of Sydney Harbour is the latest to announce he will be returning the Medal of Australia he was awarded in 2012.

Speaking to The Australian, Kingston said he was "compelled to return this medal because I object so strongly to the honour bestowed upon Margaret Court this year. It makes me sick, the whole thing," he said. "To inflict this on us, when everyone is having such a hard time, I can’t be a part of it anymore."

Peter Kingston has sent back his Member of the Order of Australia award to protest Margaret Court’s own honour.https://t.co/kwGNDCCrhD

Court was recognised in the 2021 honour's list for her tennis accomplishments, as the winner of a record 24 Grand Slam singles titles and a mentor for young athletes.

The uproar, however, is over her derogatory and offensive comments towards the LGBTIQ+ community, which she has publicly shared over the years via several prominent media organisations. 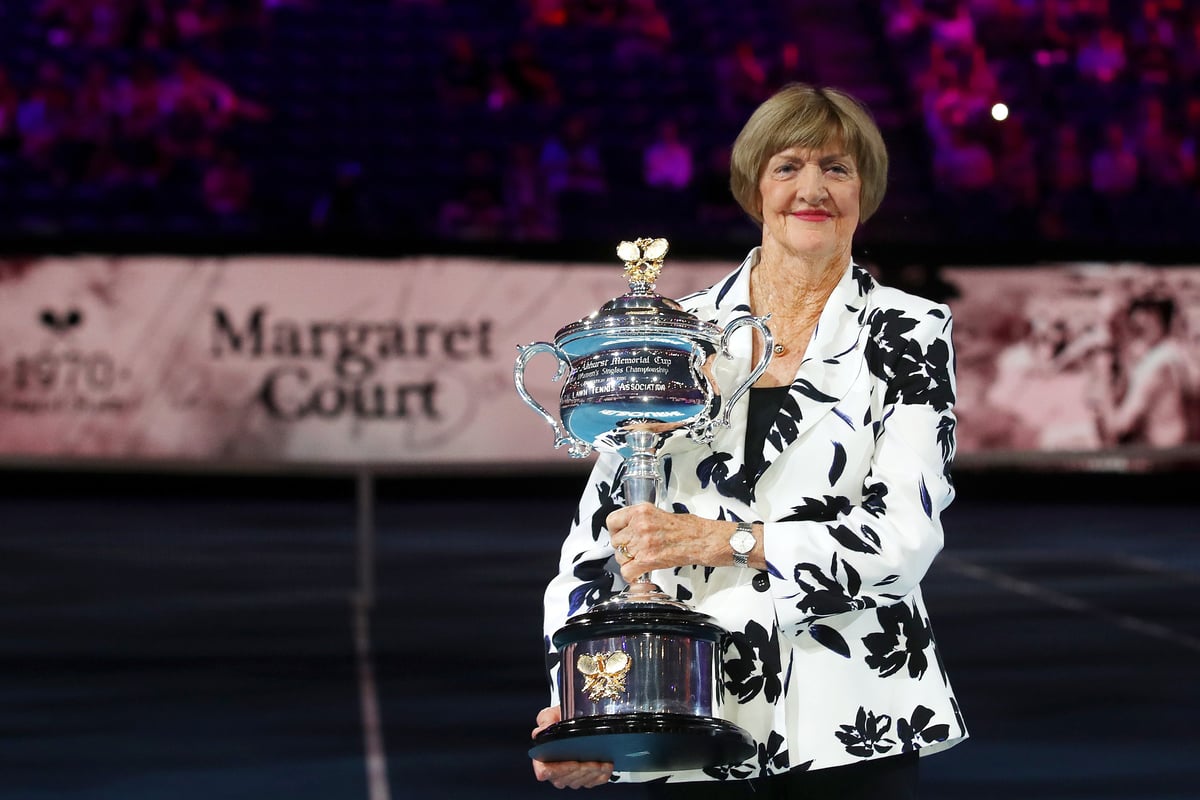 Margaret Court is an Australian tennis champion. But in 2021 she's arguably more well known for her homophobic views. Image: Getty.

READ: Margaret Court made her tennis about bigotry. We didn't.

Transgender GP Clara Tuck Meng Soo was the first to announce she would be handing back her 2016 Award, telling Governor General David Hurley in a letter, "My working life as a general practitioner in Canberra has been defined by the principle of non-judgmental care and I have done a lot of work with the HIV community, people with drug dependency and the LGBTIQ+ community. It is therefore with great disappointment that I read today that Mrs Margaret Court is to be promoted to a Companion of the Order of Australia, which I understand to be our highest civilian honour.

"I am sure that the Council for the Order of Australia will be aware of the controversy that surrounded Mrs Margaret Court when she was presented with a special trophy at the Australian Open last year to mark 50 years since her Grand Slam in 1970. Even within her field of achievement of tennis, there was strong dissent to her being given that honour and recognition at the Australian Open. No one disputes her achievements in tennis. However, I am sure that given the controversy surrounding Mrs Margaret Court, the Council for the Order of Australia will be well aware of the derogatory and very hurtful remarks she has made about the LGBTIQ+ community and all who support them.

"I may also add that I have spent most of my adult life as a gay man before my gender transition to a woman in 2018. I therefore have both professional experience as well as lived experience of the communities that Mrs Margaret Court makes these derogatory and hurtful remarks about. For myself, I am very fortunate that I have a loving and supportive husband who loves me for who I am as well as lots of wonderful friends and colleagues. However, I know that there are many LGBTIQ+ people who do not have the supports I have. We know that transgender adolescents have the highest self-harm and suicide rates in our community and the remarks that people like Mrs Margaret Court make are very damaging to their morale and health. By giving this promotion to Mrs Margaret Court, the Council for the Order of Australia is sending a strong signal to these distressed youth that discrimination and prejudice towards them is tolerated in our Australian community."

Then TV veteran Kerry O'Brien followed in Dr Tuck Meng Soo's footsteps, declining his 2021 appointment as an Officer of the Order of Australia (AO) writing to Governor General Hurley, "I believe the decision to present her [Court] with this award was deeply insensitive and must undermine community respect for awards that were created to celebrate a true spirit of community, not divide it."

Voluntary assisted dying advocate and former President of Dying with Dignity Victoria Dr Rodney Syme, indicated last week he would be renouncing his 2019 Award "if Margaret court accepts this award," in an op-ed for The Age.

"Court has already been awarded for her tennis achievements," he wrote. "If Margaret Court accepts this award, I will with regret be renouncing mine. I do not support this decision by the Council for the Order of Australia and do not wish to be associated with such company."

A quick recap if you're unaware of the controversy. Court retired from a spectacular career in tennis in 1977, and over the past decade has made a name for herself as an outspoken critic of LGBTIQ+ communities.

During the 2011 Australian marriage equality debate told The West Australian the law "violates [societies] very own God-given nature of what is right and what is wrong." In 2013, she publicly decried the birth of fellow tennis player Casey Dellacqua's child in a same-sex relationship because the child was being "deprived of his father." In 2017, she urged Australians to boycott Qantas over their corporate support of same-sex marriage, and she once told Vision Christian Radio that LGBT tendencies in young people were "all the devil".

Court is not the first inclusion in the January 26 honour's list that's caused uproar over the years, and she certainly won't be the last. But it raises an important question: Is it okay to honour someone for one thing, while ignoring their beliefs?

What does that teach our children, especially LGBT children? That hate speech, and cruel public condemnation of a minority is okay, as long as you're really successful?

This isn't just a tennis award, or an industry award, it's Australia's highest form of praise.

In 2020, Bettina Arndt was appointed a Member of the Order of Australia for significant service to the community as a social commentator and to gender equity through advocacy for men.

A month later she publicly asserted that the murder of Hannah Baxter and her three children at the hands of their father and husband might have been because he was "driven too far."

Congratulations to the Queensland police for keeping an open mind and awaiting proper evidence, including the possibility that Rowan Baxter might have been “driven too far.” But note the misplaced outrage. How dare police deviate from the feminist script of seeking excuses...

She'd previously warned of a "rape crisis scare campaign" on universities and in 2017 interviewed the abuser of 2021 Australian of the Year and sexual assault survivor Grace Tame, accusing women like her of "exploiting their seductive power to ruin the lives of men".

READ: Grace Tame is officially the 2021 Australian of the Year. Here is her story.

Radio broadcaster Alan Jones was honoured in 2004 for his contributions to media and sport despite the fact he has also been accused of bullying, racism, misogyny and defamation.

The list of controversial additions to the Order of Australia goes on.

For clarification, none of this is about one's right to an opinion. Everyone is entitled to an opinion in Australia, because we live in a country where thankfully free speech is a key value.

But when those opinions or actions are publicly derogatory, offensive or criminal, should the individual attached to them be receiving the highest honour of recognition that can be bestowed on an Australian?

In the case of Court, when your opinion is prejudice towards things that people can't change it's no longer an opinion. It's hate speech.

Margaret Court has already been honoured for her tennis prowess.

She’s already an Officer of the Order of Australia.

I think it’s clear for everyone to see that making her a Companion of the Order of Australia has nothing to do with tennis.

Yes, she was an incredible tennis player. Tennis gave her a platform. But she then actively used her platform to share hurtful, cruel and oppressive commentary with the Australian public, that negatively impacts an already vulnerable minority in this country.

Order of Australia Awards are reserved for only a few hundred people a year in a country of 25 million people.

Is awarding someone who actively and publicly perpetuates hate speech, or someone proven to be a workplace bully, really deserving of this honour?

In Court's case, at least four fellow recipients think not.

In 2022, the Council for the Order of Australia - who are receiving significant backlash for this decision, will be forced to reckon with an uncomfortable truth.

To what extent does our morality impact our legacy?

damocles a month ago

Reply
Upvote
when tolerance only goes one way you are using the wrong word.
instead you might try intolerance or even dictatorship.
salemsaberhagen a month ago

Reply
Upvote
@damocles There is some things that a decent society shouldn't tolerate.  This should not need to be explained.  I suggest you look up the meaning of 'dictatorship'.  Not accepting a gift or award does not equal 'dictatorship'.
<deleted> a month ago