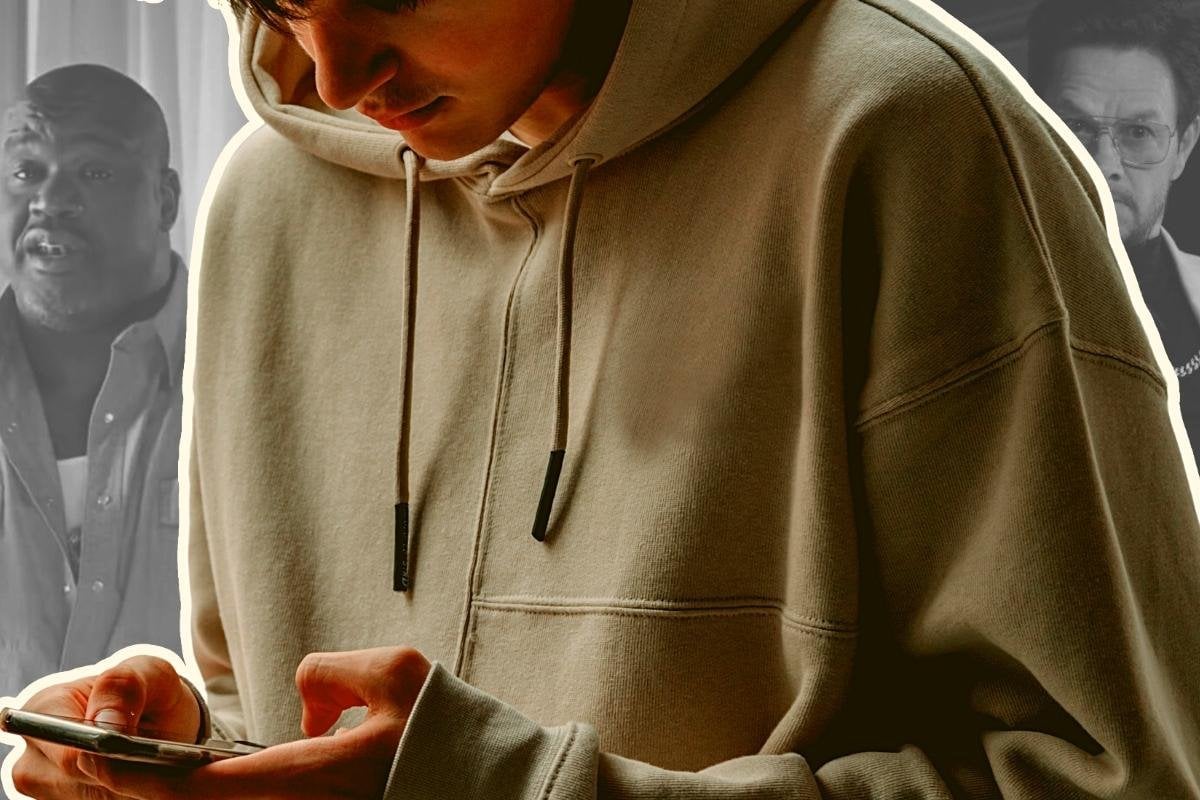 The following contains mention of suicidal ideation, which may be triggering for some readers.

When Sandra's son, William*, turned 18 in early 2019, he did what many young Australian men do. He went to the horse races and the casino with his friends. There, he indulged in an experience opened up to him by his passage into adulthood. Gambling.

Sandra admits she and her husband celebrated the news when he came home that evening. After all, that's a lot of money for a teenager — and what luck!

"I do remember my husband saying to him, 'It doesn't happen like that all the time. You have to be aware of that we don't hear about people's losses.' Something like that," Sandra told Mamamia. "But we certainly didn't make a big deal about that. We were excited for him.

"Looking back, I should have been horrified..."

Sandra can't help but ponder that and other 'what-ifs' of the past two years. What has followed since that day has been one of the most challenging periods the Western Australian family has faced.

William, now 20, has lost roughly $70,000 to online gambling; an addiction that has left him in debt to friends and his parents, and caused significant emotional distress for them all.

"He couldn't stop himself from betting."

It's clear Australia has a gambling problem.

According to the Australian Institute of Health and Welfare, we lost $25 billion on legal forms of gambling in 2018-19 — the largest per capita losses of any country in the world.

Our preferred way to wager is still poker machines. But thanks to mobile phone technology and the concerted marketing efforts of bookmakers, online gambling is the fastest-growing.

And that's where young men come in.

They're betting more, and losing more, to the extent that men aged 18–34 are now considered the demographic most at risk of problem gambling.

During the initial months of 2020 COVID-19 lockdowns, for example, the average monthly amount they spent on betting increased by more than 50 per cent to $1075.

READ MORE: You're not imagining it. Everywhere you look is a gambling ad.

That's where the majority of William's money went.

What Sandra now knows started for her son as the odd flutter, ballooned into a crippling addiction within months.

By the end of 2020, he came to her asking to borrow money. Given he had a job and was still living at home with few expenses, alarm bells rang for Sandra. She said he told her he'd made some bad bets, but insisted he was done.

Then, come May, William confessed to his parents that he was in debt $17,500 to multiple friends. And that was after having sold possessions like his surfboard and smartwatch, and pawning his laptop.

"He was beside himself. He said he wasn't sleeping. He was absolutely sick to the stomach knowing that he owed people money. And he couldn't stop himself from betting.

Sandra continued, through tears, "At one point he said he didn't want to be here. He couldn't cope with the shame of it, and the pressure. He'd be waking up in the morning thinking, 'What can I bet on today to make some money so I can pay people back?' He couldn't stand that feeling."

It's been a mess of emotions for Sandra. Anger. Sadness. Fear. Shock.

Particularly given what she learned about the extent of his deception. The lies he'd told her about his missing possessions. The $20,000 she and her husband loaned him through their business to 'invest' (he gambled it all). The thousands he'd coaxed out of friends, oblivious to his addiction. Even the way he'd manipulated a peer.

"I saw a text message to a girl he was doing an assignment with at uni — he didn't know her particularly well," Sandra said. "He told her that his family was going through a big lawsuit worth $4.5 million, and that at the moment he was supporting the family and he needed $850 to cover a power bill," she said. "Really intricate stuff."

Listen: How pokies attract us and what it can do to our lives when the addiction sets in. (Post continues below.)

Sandra struggles to reconcile that version of William, with the intelligent, dedicated boy she raised.

"It's horrifying. I feel like I'm talking about someone else," she said. "This is not who we are. This is not my son, who we've brought up, hopefully, with the right morals and values.

"I feel absolutely sick when I think about some of the things he's done, and with the worry that he's not going to be able to get out of this."

She and her husband are doing what they can to ensure he does.

They sat with him as he contacted his various betting apps to register for self-exclusion, meaning he can no longer hold accounts with them. And he's taken another job to help repay his loans.

In the meantime, they have also fronted their own money to pay back his friends, who are now fully aware of his problem (Sandra controls those funds and the payments, which came with various conditions including that William seeks help).

Between that, the 'investment' money, and other losses, the couple is $45,000 out of pocket due to their son's gambling.

"It has had an impact. But we're lucky; we have a house, we have a business," she stressed. "It hasn't completely ruined us like it does so many people."

Sandra does not absolve William of personal responsibility. But she is alarmed at the apparent reluctance from industries and government to address factors that enable problem gambling.

Like the fact that a bank provided her son with a second personal loan, even after they'd been informed of his addiction and inability to repay. Or the saturation of gambling advertising on television and online, particularly surrounding professional sport.

Such is the influence of this marketing, that in 2018 the Australian Gambling Research Centre found that 81 per cent of 18–35-year-old male bettors in Victoria reported having used at least one form of betting promotion in the past 12 months, such as sign-up bonuses and stake-back offers.

Interview participants also indicated that friends and peers had a big effect on their betting behaviour. They reported that their mates often discussed betting odds together, shared tips with each other for 'good' bets, and encouraged each other to bet. They said the subject was raised in person and via groups chats on a weekly, even daily, basis.

William has indicated the same to Sandra. The normalisation and proliferation of sportsbetting advertising, in particular, has made it difficult to escape during his recovery.

"As he says, 'Mum, everybody gambles. All my mates are out there having a bet. And in our group chats, it's all about get on this one, get on that one,'" Sandra said.

"Then it's just a barrage of betting ads with movie stars advocating for how wonderful it is, and making it seem as though this is normal, that this is what everybody does and you'll have a great life if you gamble."

After opening up to friends, she realised she wasn't alone as a parent of a gambling addict, either.

"Shockingly, they had really similar stories," she said. "There are so many people out there that, because of the shame of it, don't speak."

Eager to channel her situation into something productive, Sandra has written to representatives at various levels of government and clinical experts urging them to advocate for raising the legal gambling age, ideally to 25.

"We often read about the prefrontal cortex [the region of the brain responsible for executive functions like planning, problem-solving and impulse-control] not maturing until mid 20s," she wrote, "and, of late, society is accepting this to some degree and making allowances for poor decision-making or, better still, guiding young men to making better decisions."

Sandra would also like to see gambling ads banned from television, or at least relegated to late-night time slots after sporting matches and family programming are over. (She encourages people to visit endgamblingads.org.au and sign the petition.)

Again, she's not blaming government. She knows it's down to William, at 20 years old, to take responsibility for his addiction and be accountable for his behaviour. And she's cautiously optimistic that he's on that path, that a day will come where she can trust him again.

"It's only about three weeks since he last fell off the wagon. So I think it's just a little bit early to be totally blinkered and naïve about it," she said.

"But he's spoken of his real hope that this is it; that he's done with gambling. I hope we do regain that trust."

If you or a loved one is engaging in problem gambling, support is available. Call the National Gambling Helpline on 1800 858 858, or visit Gambling Help Online for more resources or find a service near you.

If you are thinking about suicide or experiencing emotional distress, help is available. Call Lifeline on 13 11 14 to speak to an experienced crisis counsellor.

A
anonymous 7 months ago

Reply
Upvote
It is disgraceful that betting ads are saturating family viewing time every night on TV. Our government reaps the rewards from betting in vast taxes, equally disgusting. A Melbourne radio DJ, ex-footballer so an idol to many young kids, talks often about his betting on horse-racing, when kids are in the car to school. Disgusting. The advertising watchdogs do nothing, disgusting. A seedy, lowbrow male past-time that ruins families,  allowed to get its hooks into our children. Disgusting.
M
mmome 7 months ago

Reply
Upvote
Sadly our family has been dealing with a very similar scenario with my brother. He was extremely bright and a wonderful sportsman. Started gambling at 18 and is now 31. I would loosely say a ‘functioning’ gambling addict. He is single, has a well paid job & spends every spare cent gambling. He is always broke. It has ruined his life & he is completely damaged from it. We have all tried to help but the hold it has over him is just too strong.
The betting companies are unscrupulous… constantly sending emails offering free bets and free money to get them started again.
Sadly there is nothing anyone can do to help and I am sure this family will learn that by bailing their son out and paying off his friends they are actually enabling him to continue. As a wise councillor told us at the beginning of our journey… There is nothing you can do until they have hit rock bottom and have true motivation to change.
News
General
Opinion
True Crime
Politics
Sport
Explainer
Entertainment
Celebrity
Reality TV
Movies
TV
Books
Rogue
Royal
Lifestyle
Beauty
Fashion
Weddings
Home
Wellness
Health
Fitness
Travel
Food
Parents
Before The Bump
Pregnancy
Baby
Kids
Teens
School
Parent Opinion
Work & Money
Money
Finance
Career
Lady Startup
Relationships
Sex
Dating
Separation
Friendship
Family
Real Life
Couples