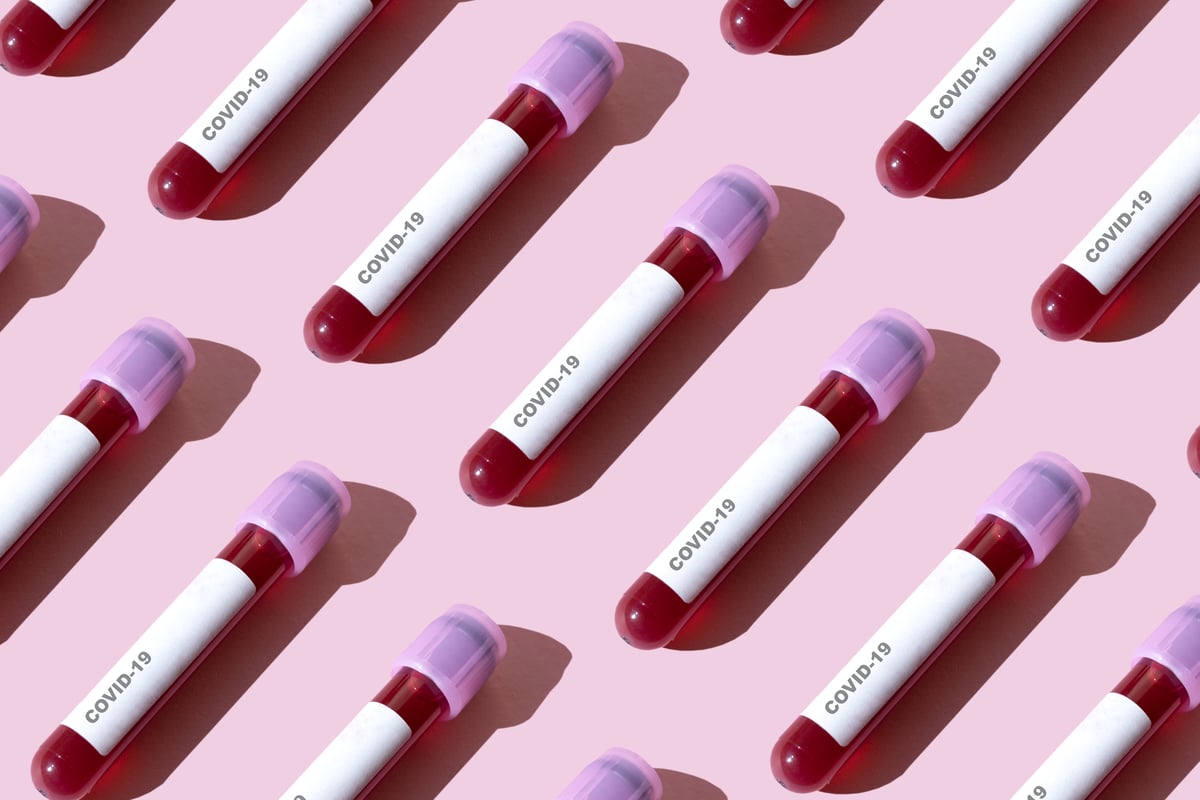 "Omicron" has been filling our news feeds and weekend conversations ever since news broke that it was variant "of concern" on Saturday.

But amongst the concerning headlines, how much do we really know about the new COVID-19 variant and how worried should we actually be?

Here are the eight biggest questions we have about Omicron answered.

1. First up, how infectious is the Omicron variant?

So far, health authorities suggest Omicron (also known as B.1.1.529) could be a more infections variant of COVID-19. However, this still hasn't been confirmed.

Associate Professor Sanjaya Senanayake, an infectious diseases expert based at the Australian National University in Canberra, says it has to do with the variant's mutations.

"Those mutations can make it easier for the virus to get into the cell. Also, the other mutations which can help it evade the immune system can change the shape of the spike protein a little bit so our immune system doesn't necessarily recognise it. It's a bit like... a criminal having plastic surgery to alter their appearance, so the cops can't find."

Another reason that points to the variant being potentially more infectious is because "it seems to be overtaking Delta" in the area of South Afirca where the variant was first reported this month.

"Preliminary evidence suggests an increased risk of reinfection with this variant, as compared to other variants of concern," the World Health Organisation said in a statement.

2. How sick does Omicron make you and what do the symptoms look like?

While Omicron may be more infections, the good news is, early indications suggest it actually causes a less severe illness.

"We've haven't got a huge amount of information from South Africa but from what we've heard, it's infecting young, healthy people, but causing a mild illness that's keeping them out of hospital," said Senanayake.

However, "the problem with South Africa, again, is only around six percent of the population are over the age of 65. So again, the virus may not have had the opportunity to infect older people who, as we all know, are at higher risk of severe COVID."

As for the symptoms, he says the "predominant symptom seems to be fatigue more than anything else."

The WHO also confirmed that "there is currently no information to suggest that symptoms associated with Omicron are different from those from other variants".

3. Are there cases of Omicron currently in Australia?

Yes, but not many.

At the time of publication, there are currently five confirmed cases of the Omicron variant in Australia.

Four of those cases include passengers who touched down in Sydney over the weekend and a fifth case who tested positive while in quarantine at Howard springs in the Northern Territory.

However, NSW Health Minister Brad Hazzard told 7 News an additional case is set to be confirmed in the state, after fully a vaccinated woman in her 30s arrived in Sydney from South Africa on Saturday.

4. Can Omicron take over Delta as the dominant strain?

It could. And that's not necessarily a bad thing.

"[If it] becomes the dominant strain, we might not see much of Delta at all in the same way we don't see much of the Wuhan strain now because of Delta," said Senanayake.

5. Do our vaccines work against Omicron?

At this stage, there's not a lot of information about how vaccines react with the Omicron variant because - as Senanayake points out - only 25 per cent of the population are fully vaccinated in South Africa.

"Therefore, a lot of vaccinated people over there may not have met the virus. So it may be hard to tell how the vaccines behave."

However, "as we see Omicron appear in other countries around the world... we might see how it interacts with vaccinated people."

In the meantime, data is also being collected in labs.

BioNTech said they are expecting more data on the new variant within two weeks to help determine whether its vaccine produced with Pfizer will have to be reworked.

"We expect more data from the laboratory tests in two weeks at the latest. This data will provide more information about whether B.1.1.529 [Omicron] could be an escape variant that may require an adjustment of our vaccine if the variant spreads globally," BioNTech said in a statement.

If a vaccine tailored for the Omicron variant is needed, Pfizer and BioNTech have both confirmed it could be ready to ship in approximately 100 days.

6. What does Omicron have to do with vaccine inequality?

According to experts, there's a clear link between the two.

Health authorities have warned that new variants could keep emerging in countries that have low vaccination rates, such as South Africa. This is why campaigners are calling for high-income countries to stop 'hoarding' the vaccine and instead help support low- and middle-income countries afford it.

"The emergence of the Omicron variant should be a wake up call to the world that vaccine inequality cannot be allowed to continue until everyone is vaccinated. Everyone will continue to be at risk," said South Africa's President Cyril Ramaphosa.

"The lesson here is even if Omicron doesn't turn out to be that deadly and that vaccines are very effective against it, we need to make sure that the rest of the world is vaccinated. Equitable access to vaccines is so important. Otherwise, something more infectious than Omicron [and] potentially more deadly than Delta and Omicron might appear."

7. Why has Omicron been labelled the 'South African variant'? And why it shouldn't be.

Over the past few days, experts and public figures have slammed those who refer to Omicron as the 'South African variant', pointing out that while the variant was first reported in South Africa, it doesn't mean it originated there.

In fact, Omicron has now been confirmed in the UK, Hong Kong, Israel, Belgium, Germany and other countries.

It was isolated and sequenced in South Africa because they have some of the worlds best epidemiologists and infectious disease capabilities https://t.co/nJonbRjrCg

Over the weekend, Dr Ayoade Olatunbosun-Alakija of the Africa Union’s African Vaccine Delivery Alliance, also called out the problem with vaccine inequality and just how "wrong" it was that Africa has been subject to harsh travel bans, while other countries with confirmed Omicron cases haven't.

She recommended a "co-ordinated global shutdown of travel for the next month" but urged "don’t single out Africa".

Spoke to @BBCWorld earlier today about #VirusVariantsVaccine #VaccineApartheid Inequity & Injustice. Thanks to Philippa Thomas for inviting me on. This is NOT the answer, we need Global Solidarity and we need it NOW! pic.twitter.com/aI9DhnDF6n

8. What does Omicron mean for Christmas travel?

Countries all over the world, including Australia, have already tightened travel restrictions.

And according to Dean Long, CEO of the Australian Federation of Travel Agents, it's "going to have a devastating impact for Christmas travel".

"We know that the number one issue for people looking to book travel was the fear of not getting home. And on Saturday that was realised for those people who are wanting to travel now and into next year."

"It does mean those people who are looking to go overseas in the middle of next year will be significantly more weary than what they were before this announcement, and it will have a direct impact on whether travel agents can survive this pandemic. It's been 21 months with next to no business."

However, he pointed out that international travel restrictions will bring "good news for people to travel in their own state".

Reply
Upvote
Morrison's aide: "Omicron is in Australia!"
Morrison: "Damn, do we think he'll call me a liar again?"
J
julie.harris0503 6 months ago

Reply
Upvote
The issue around the low vaccination rate in Africa is not as simple as other countries hoarding the vaccine. There is a lot of availability of vaccine in Africa. But equally a lot of vaccine hesitancy. Less infrastructure to deliver to people easily and possibly less opportunity to take a day off work to have the vaccine.
C
cat 6 months ago

Reply
Upvote
@julie.harris0503 Its true that in South Africa supply exceeds demand, but there are many places in Africa that didn't receive vaccines until a few months ago. The west hoarded vaccines until they had a surplus, but African nations cant magically vaccinate everyone at once. They should have been the first to get vaccines because of the issues with delivering them, not have to wait until last.
News
General
Opinion
True Crime
Politics
Sport
Explainer
Entertainment
Celebrity
Reality TV
Movies
TV
Books
Rogue
Royal
Lifestyle
Beauty
Fashion
Weddings
Home
Wellness
Health
Fitness
Travel
Food
Parents
Before The Bump
Pregnancy
Baby
Kids
Teens
School
Parent Opinion
Work & Money
Money
Finance
Career
Lady Startup
Relationships
Sex
Dating
Separation
Friendship
Family
Real Life
Couples