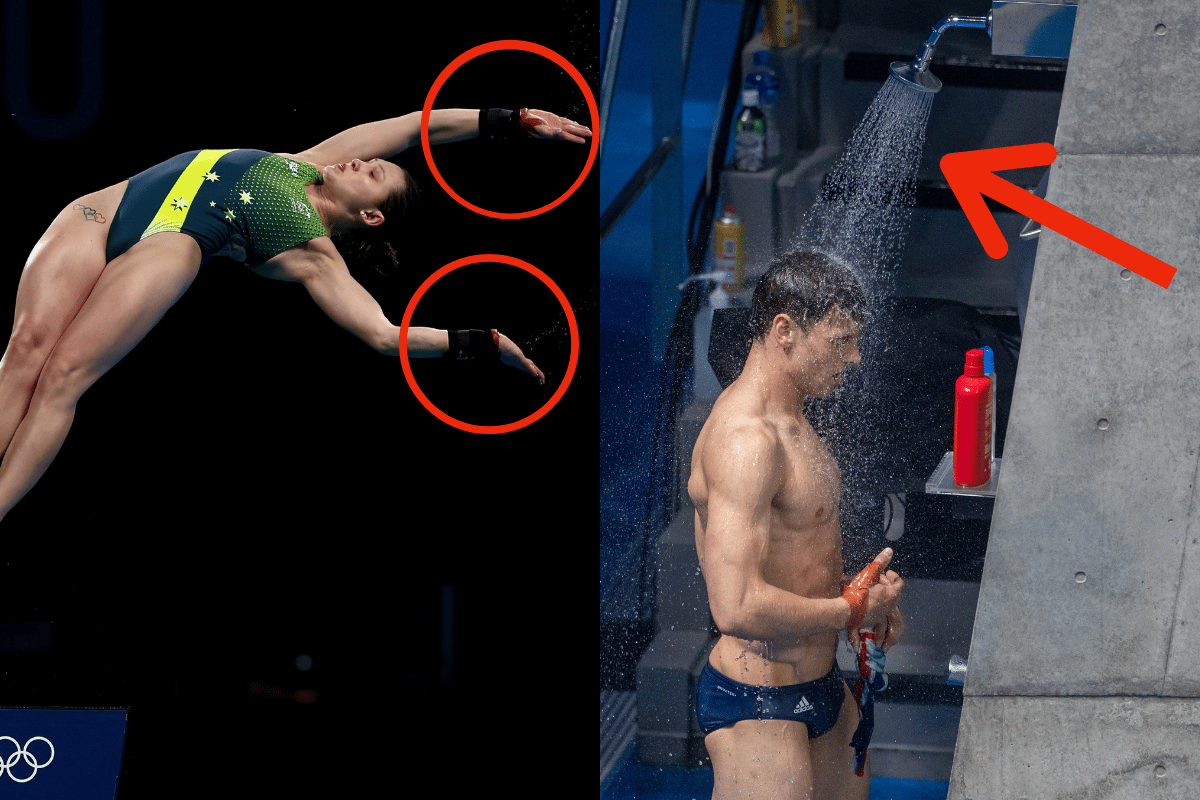 Australia just snatched up our first medal for diving at the Tokyo Olympics. And it's all thanks to Melissa Wu.

The 29-year-old kicked things off by winning a bronze medal in the women's 10m platform final earlier today.

But as we tune in to watch the diving, we've started to ask ourselves some questions.

Like why do drivers have tape on their body? And what's the go with the ridiculously tiny towels?

So we decided to investigate (by that we mean trawling the internet and watching TikTok videos for 'research').

Listen to this episode of Mamamia Out Loud, where Holly, Mia and Jessie recap of some of the weirder side of the Olympic games. Post continues below.

Here are eight things you've probably always wondered when watching the diving at the Olympics.

Let's dive in (excuse the pun).

1. Why do divers have strapped wrists?

By now, you may have noticed divers wearing tape around their wrists or other parts of their bodies. And it's actually for a very good reason.

In a recent TikTok video, Melissa Wu explained that athletes hit the water so fast they need to wrap tape around their wrists to prevent injury from the impact.

And by fast, we mean they're hitting the water at 60 kilometres per hour from the 10 metre platform.

Wu said the most common diving injuries are to the neck, wrists, knees and back which are usually caused from diving into the water during training.

"Sometimes we do over 50 dives per session."

Learn more about diving so you can watch and support from home! ##tokyo2020 ##olympicspirit ##diving

2. What's the go with the tiny towels?

While you might think a towel that covers a fraction of your body isn't the best thing to keep you warm after getting out of the pool, these suspiciously tiny towels are actually great at drying athletes.

In another TikTok video, Wu said the towel is called a shammy and is used to dry themselves off in between dives so they can grip onto their legs to perform positions such as pikes and tucks.

"If you're wet, it's really easy for your hands to slip off your legs in the air," she explains.

They also use the micro fibre towels to quickly dry their hair and swimsuits so water doesn't spray as they spin in the air.

"If you use your towel, it gets wet pretty quickly so using a shammy to dry off means you don't have to bring 50 towels with you to the pool."

Learn more about diving so you can watch and support from home! #tokyo2020 #olympicspirit #diving

3. Why do divers shower in between dives?

It might seem like an odd time to shower, but divers usually shower or jump into a hot tub after getting out of the pool to keep their muscles warm and relaxed before their next dive.

This prevents their muscles from cramping up or becoming strained. 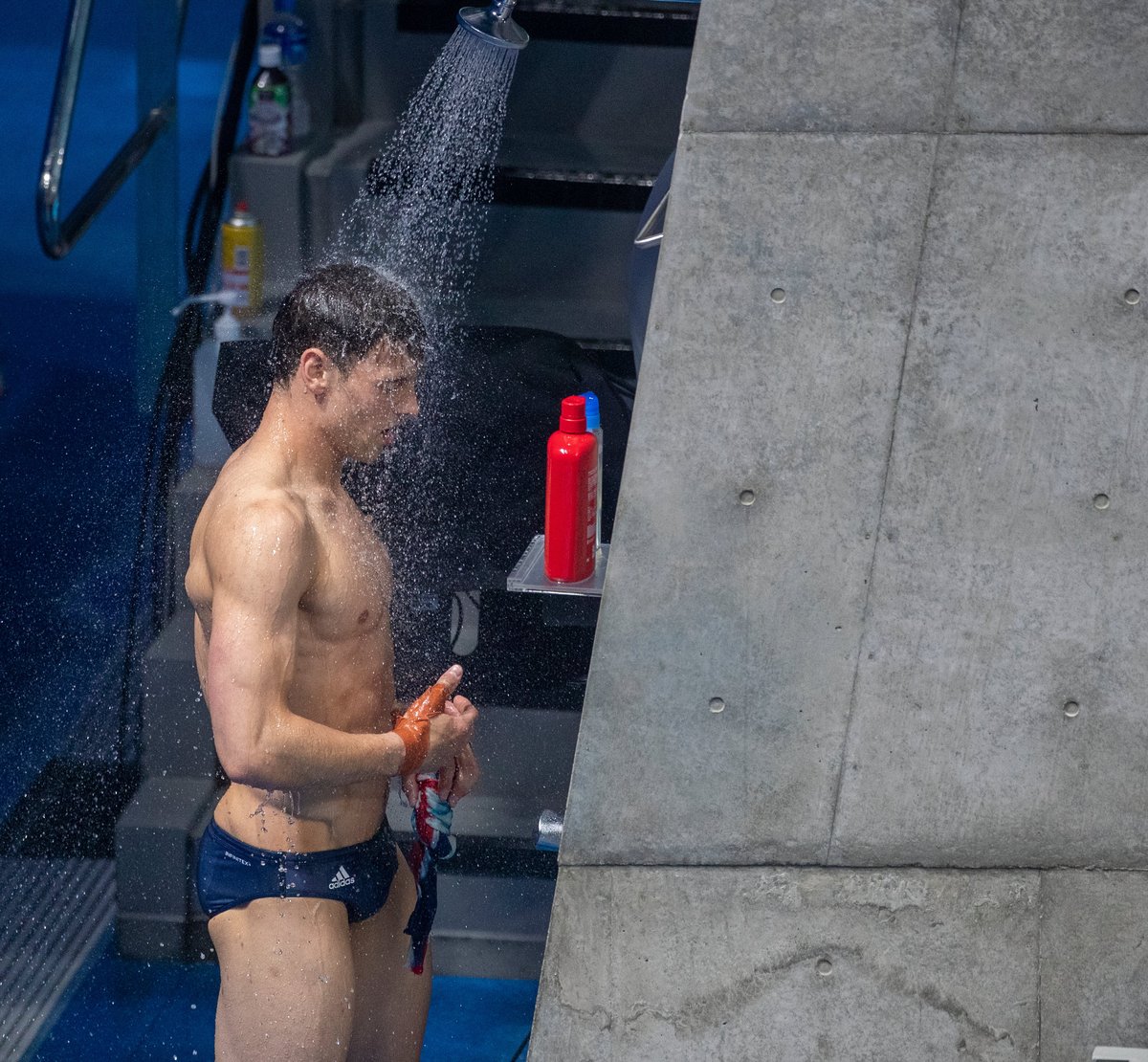 Tom Daley showering during his dive for the Synchronised 10m Platform. Image: Getty.

4. Why does water get sprayed in the pool?

You may have noticed water gets sprayed into the pool before every dive.

As diver Sam Fricker explained on TikTok, "When you're spinning around you need to be able to see the surface of the water so you know where you are. If the water was clear, you'd be seeing five metres deeper than what you actually are and you wouldn't be able to time your dive right."

5. How deep are Olympic diving pools?

At the Olympics, there are two types of diving; platform diving and springboard diving.

Both of these take place in the same pool, which is why the International Federation of Aquatic Sports (FINA) recommends that the pool needs be at least 16 feet (around 5 metres) deep.

6. How high is the highest diving board?

In the Olympics, athletes dive from two different heights. One is three metres, and the other is 10 metres (which looks downright terrifying). 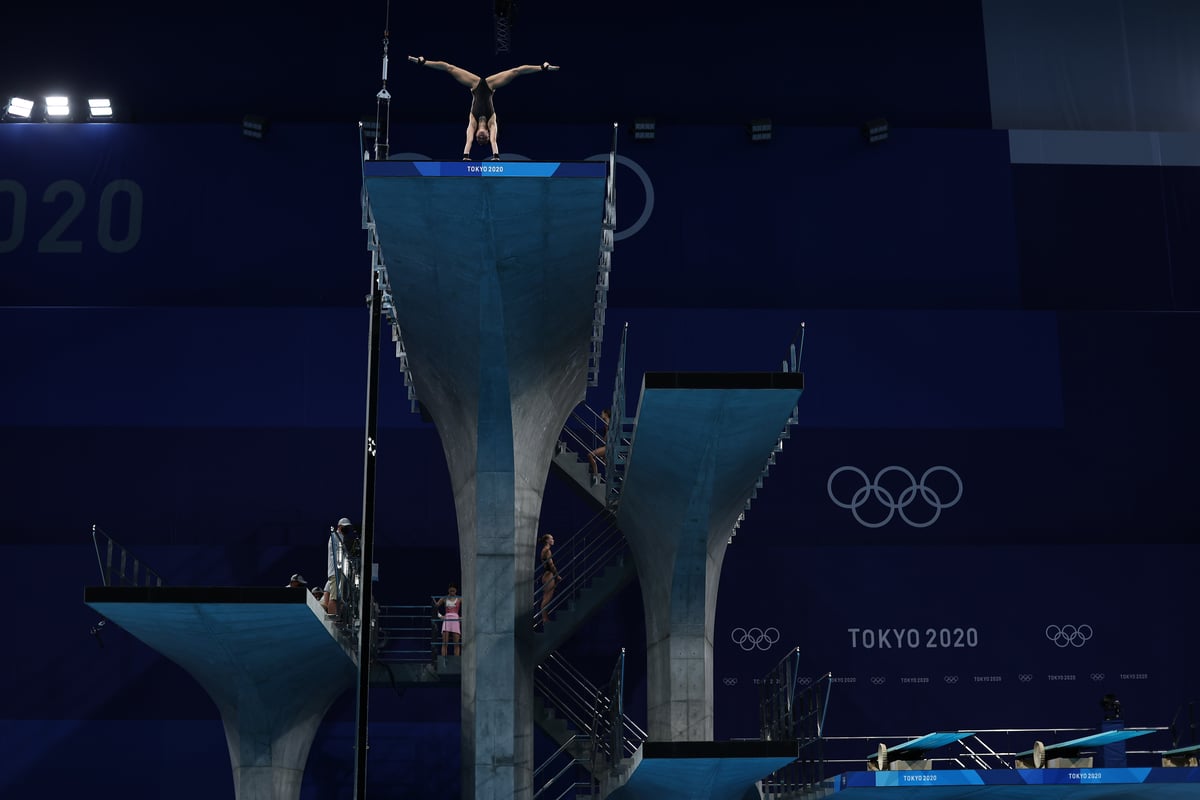 7. What is the hardest dive?

According to British diver Tom Daley, the hardest dive tends to change every year.

8. How is Tom Daley's knitting going?

Speaking of Tom Daley, the gold medallist has caught the world's attention with his impressive pool-side knitting skills.

And if you've been wondering how his knitting has been going, you're in luck. Earlier today, Daley shared a photo of the Olympic jumper he had been busy making.

"When I got to Tokyo, I wanted to make something that would remind me of the Olympics to look back on in the future. I designed a pattern for the colour work that would signify everything about these games," he wrote on Instagram alongside a photo of his creation.

Daley also knitted himself a cute little cosy for his gold medal, which he won with Matty Lee in the men's synchronised 10m platform last week.

"The one thing that has kept me sane throughout this whole process is my love for knitting and crochet and all things stitching," he said on Instagram.

Reply
Upvote
4 upvotes
I love watching the diving, although I prefer Stephen Colbert's name for the men's  - the Man-Panty Fancy Fall.
And I'm pleased to see Tom Daly is keeping his options open for his post-diving career, I'm sure his Esty shop will be a great success!
S
snorks 9 months ago

Reply
Upvote
4 upvotes
@rush You've just made me realise how much I miss Roy and HG's commentary from the 2000 Olympics :)