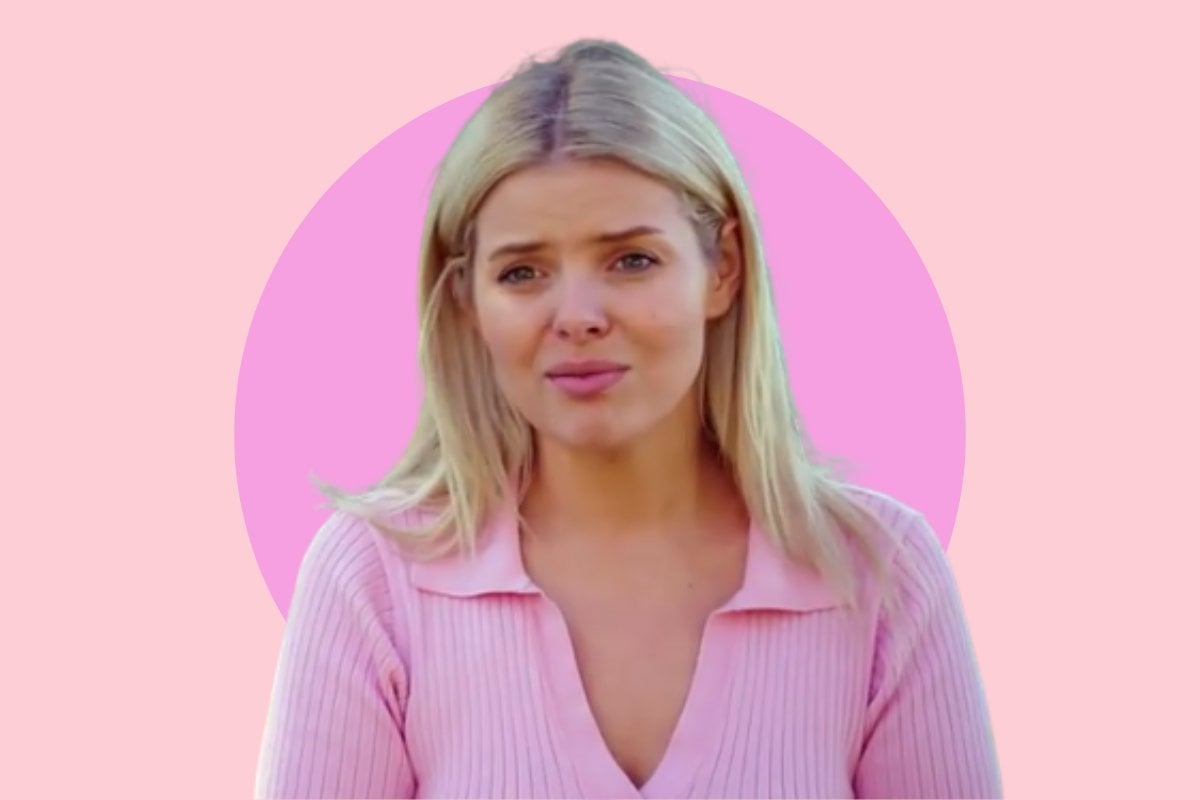 Warning: This story deals with mental health and could be triggering for some readers.

For the past several weeks, the most watched program on Australian television has been the Nine Network's reality TV juggernaut Married At First Sight. It is so popular that the acronym MAFS has entered Australian vernacular.

Like most reality television shows, MAFS follows a formula. Find a hero and find a villain, stick them at a dinner table with lots of alcohol, and see what happens. This year, the primary villain of the series has been 28-year-old teaching student Olivia Frazer.

Today Frazer is the guest of podcast No Filter, where host and Mamamia co-founder Mia Freedman asks about the reality of being a reality TV villain and what it feels like when an entire country turns against you.

"I thought going on Married at First Sight would be a cool adventure. And then I could go on with the rest of my life. It's not the case. It's been very detrimental to moving on," Frazer says.

"I don't know how I go about the rest of my professional career. My dream was always to be a teacher and stand in front of a classroom full of kids and be a helpful mentor to them. I feel like now I can't, and now it's my worst nightmare... It's terrifying right now."

Listen to Olivia Frazer's candid chat with Mia Freedman in No Filter. Story continues below."

Frazer admits to being so terrified that she doesn't go in public on her own. "My partner [MAFS husband Jackson Lonie] has to go grocery shopping with me. When I was working, I was working from home. It's just terrifying," she says. "And when I have gone out, I've had very few positive experiences with the public. And many awful ones. Too many to count."

People have called her a bitch in public arenas and one woman even cornered her in a bathroom to tell her how awful she is.

"It's happened so much now that I'm just sort of like, 'Yeah, whatever'," she says. "I don't want to say I feel like I deserve it because I definitely don't. Nobody does. There's a sense of... not immunity either because it does hurt when people do that. But it's the sense of 'this is becoming normal'."

Frazer does have the support of her loved ones. Family, friends, Lonie's family and his friends have all embraced her. There is also a psychologist provided by the Nine Network.

"They have a lovely lady behind the scenes who is available to us even now. And she's really, really lovely," she says. "She's employed by the show, yes, and she has always been nothing but kind and very supportive and given good advice to me." 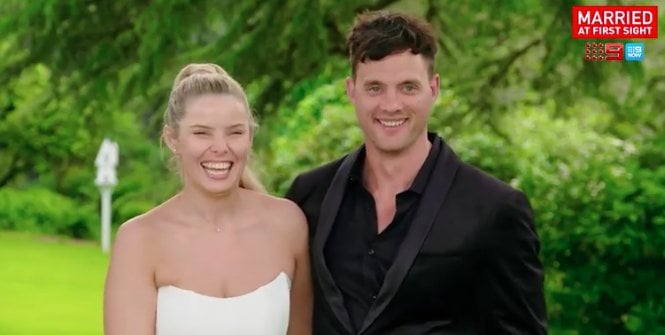 The breaking point for Frazer was when she started getting death threats on her phone. "I'd removed myself from online, like I wasn't on Instagram seeing the memes and I wasn't on Facebook seeing the comments. But getting things sent to my phone number was just such an invasion of privacy," she says.

"My friends have had to deactivate Instagram... my friends have gone to the police based on some of the stuff that they've been getting.

"I used to be a driving instructor, so many, many, many people had my private number which I've now had to change because it's not just kids I used to teach but parents texting me to call me a pig and a delusional twat and all that sort of stuff... No one deserves [this]. I know that I'm not perfect. I don't think anyone who goes on any reality TV show is perfect." 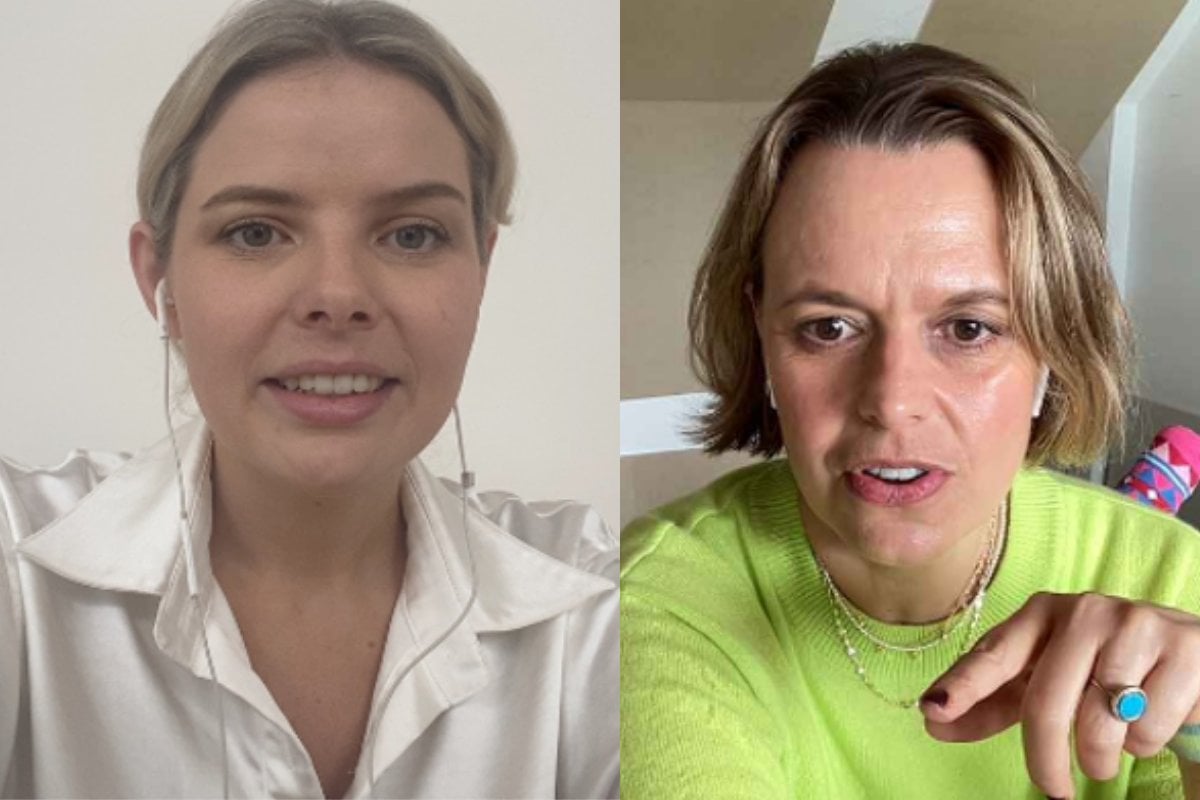 Olivia Frazer and Mia Freedman on the No Filter podcast. (Image: Mamamia)

Despite what has happened, she is still grateful for the show. "It did give me Jackson. And it did give me some good girlfriends," Frazer says. "But I wish I had done a lot of things differently."

And to all those future MAFS contestants, her advice is simple: "Don't. Do not do it. Run."

Frazer hopes that people realise she is still a human being and that their hateful words do affect her. "I'm at the point now [where] it's like trying to get up off the floor. I'm at rock bottom and I'm trying to get up," she says. "And every time somebody messages one of my loved ones something awful, it feels like I'm being kicked back down."

Yet, she knows there is light at the end of the tunnel. "I know I have a very, very bright future... I have so much to live for," Frazer tells Freedman. "I'm definitely in the eye of the storm right now, but I know that I will get through it and have a very happy life. Have a very happy, very private life very far away from reality TV!"

T
themise a month ago

Reply
Upvote
Channel 9 is at fault and the judge's  I'm not only disappointed but angry for creating such a vile environment just to get more audience.
C
cat a month ago

Reply
Upvote
2 upvotes
People seem to take someone else's bad behaviour as license for their own. Olivia did horrible things, but why does that make it okay for other people to be horrible in response? Abuse should be called out, for sure, and losing her job was firmly in the "consequences of your actions" category, but shunning someone who behaves like this is a better option than a pile on. You cant get rid of bullying without modelling a better way of interacting.
News
General
Opinion
True Crime
Politics
Sport
Explainer
Entertainment
Celebrity
Reality TV
Movies
TV
Books
Rogue
Royal
Lifestyle
Beauty
Fashion
Weddings
Home
Wellness
Health
Fitness
Travel
Food
Parents
Before The Bump
Pregnancy
Baby
Kids
Teens
School
Parent Opinion
Work & Money
Money
Finance
Career
Lady Startup
Relationships
Sex
Dating
Separation
Friendship
Family
Real Life
Couples