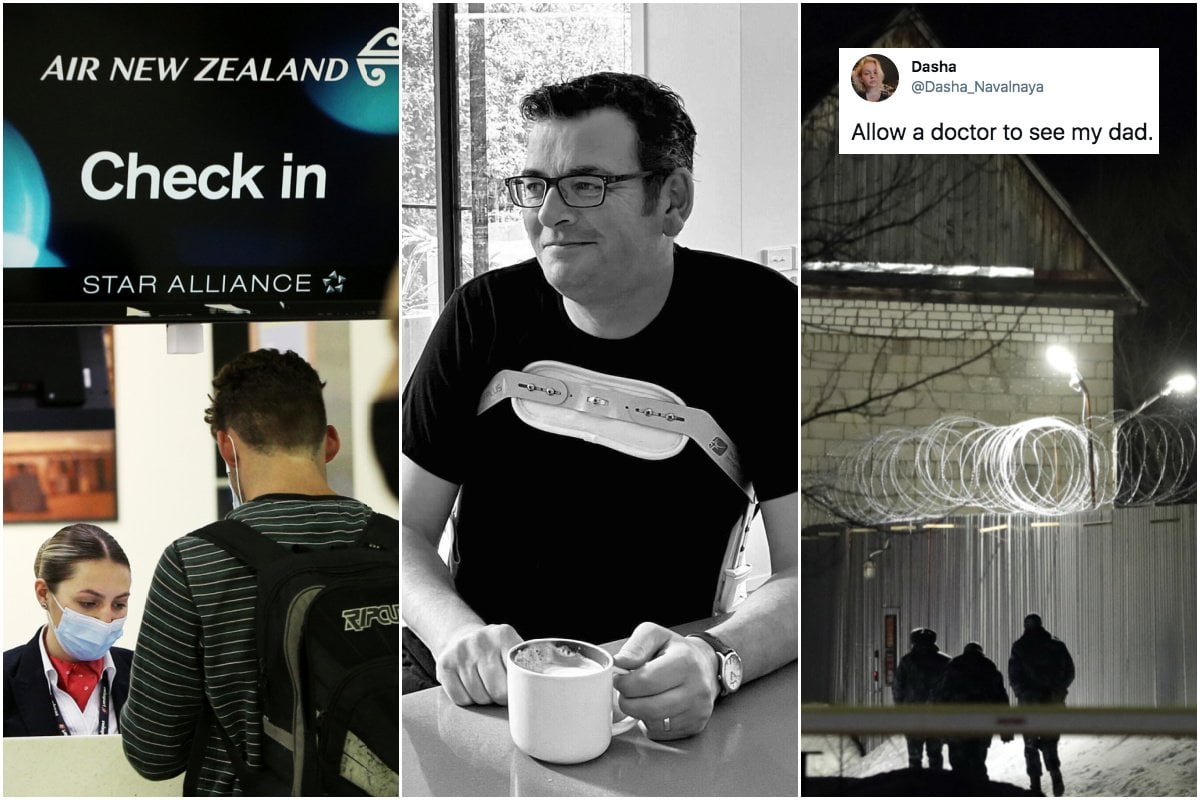 Australia-NZ bubble hailed a 'win-win' on first day in operation.

Prime Minister Scott Morrison has hailed the opening up of the Australia-New Zealand travel bubble as a "win-win" for both countries.

Travellers from Australia are once again able to cross the Tasman quarantine-free after more than a year of tight border restrictions, with the first flight out of Sydney taking off around 6am.

"Today's milestone is a win-win for Australians and New Zealanders, boosting our economies while keeping our people safe and just in time for Anzac Day," Mr Morrison said in a statement on Monday.

"Both countries have done a remarkable job in protecting our communities from COVID and two-way flights are an important step in our road out."

"It is truly exciting to start quarantine-free travel with Australia," Ms Ardern said in a joint statement with Mr Morrison.

"Be it returning family, friends or holidaymakers, New Zealand says welcome and enjoy yourself.

"The bubble marks a significant step in both countries' reconnection with the world and it's one we should all take a moment to be very proud of."

All people residing in Australia or New Zealand, including foreign nationals, can use quarantine-free travel, as long as they meet the health, immigration and other standard border clearance requirements in each country.

Health detectives believe the three cases picked up the virus from a family of four who stayed in the adjoining room of the Adina Apartment Hotel at Sydney's Town Hall.

Health was tipped off to the transmission after all seven people had the same sequence of the virus, despite arriving from different countries at different times.

The three cases have now been reclassified as locally acquired instead of overseas acquired, the government said on Sunday.

NSW Health is investigating how the transmission occurred. The first family is believed to have been infectious between April 8 and 11.

All guests on the 12th floor of the hotel, where the families stayed, have been retested and returned negative results. Staff who worked on the floor are self-isolating and being tested.

All seven people have been transferred to special health accommodation, where they will stay until they're no longer infectious.

The national cabinet will meet on Monday for the first of what will be twice-weekly gatherings following the vaccine rollout being thrown into disarray.

Included in discussions will be changes to Australia's vaccination policy, including state vaccination implementation plans, in the wake of new advice around the AstraZeneca vaccine and additional supplies of Pfizer doses.

Just over a week ago health authorities recommended the AstraZeneca vaccine should only be given to those over the age of 50 after blood-clotting was linked to younger people.

A woman who died from blood-clotting last week was the third case linked to the AstraZeneca vaccine in Australia. The first two cases are still in hospital.

Health Minister Greg Hunt said Australia is now approaching 1.5 million vaccinations after some 330,000 jabs were completed in the past week.

From Wednesday, Victorians aged over 70 will be able to show up to a vaccine centre and get jabbed without an appointment as the state prepares to scale up its rollout.

Victorian Premier Daniel Andrews has delayed until June his return to work after a serious back injury and will now miss next month's state budget.

Mr Andrews suffered broken ribs and a fractured T7 vertebra after slipping on wet stairs at a holiday home on the Mornington Peninsula on March 9.

The 48-year-old was released from hospital on March 15 and has been recovering at home since.

Victorian Premier Daniel Andrews has confirmed he will not return to the job until at least June as he makes "slow and steady progress" to recover from a broken verebra and fractured ribs.https://t.co/7rYwz179BY

At the time he said he would require at least six weeks off to recover which suggested a return late in April.

But in a Facebook post on Sunday, the premier said he now expected to be back at work in June and would miss the May 20 budget.

"A couple of weeks ago when I started daily walks, I could only manage about 15 minutes. Now I'm out for almost an hour."

Mr Andrews said while it was frustrating to be away from work, there was no alternative.

"You only get one chance to properly recover from serious injuries," he said.

"We just have to wait until the ribs and spinal fracture have properly healed."

The premier again thanked the health professionals involved in his recovery and all Victorians who had sent messages of love and support.

Thousands of SAS veterans of the Afghanistan conflict will keep their Meritorious Unit Citations unless convicted of war crimes or sacked for bad conduct after they were threatened with losing the honour.

Defence Minister Peter Dutton is due to make the announcement on Monday after Chief of Defence Angus Campbell last year warned more than 3000 soldiers could lose their citations following a damning war crimes report.

"We honour these young men and women and they will be wearing their unit citation medal with pride," Mr Dutton told The Australian on Monday ahead of Anzac Day on April 25.

Peter Dutton has moved to overrule a verdict to strip the medals of more than 3,000 Australian Special Forces veterans as a collective punishment for alleged war crimes. #9Today pic.twitter.com/UNbNqSxWck

"Almost 40,000 honoured our country with their service in Afghanistan and Iraq and I couldn't be more proud of their sacrifice."

Mr Dutton will formally make the announcement later on Monday when he visits the Special Air Service Regiment HQ at Campbell Barracks in Perth.

An inquiry led by Justice Paul Brereton found some SAS forces who served with the Special Operation Task Group in Afghanistan unlawfully killed 39 civilians and prisoners and treated two people with cruelty between 2007 and 2013.

In response, General Campbell warned in November more than 3000 SAS soldiers would be stripped of their citations in response to the allegations. But he soon after clarified that response saying no decision had been made on how to respond to the recommendations of the report.

Later, tens of thousands of people signed an online petition demanding only veterans convicted of war crimes have their citations revoked.

Police have charged a man with murder after a fatal double shooting and a dramatic manhunt in Queensland.

They say the pair, aged 23 and 37, were shot on Lower King Street at Caboolture, north of Brisbane, just after 5pm on Saturday.

The two men, from Burpengary, were declared dead after being taken to Caboolture Hospital.

Witnesses told police arriving on the scene they saw a man driving off in a Toyota Yaris.

A man has been charged with murder after two men were shot dead at a suburban unit block at Caboolture overnight. | @SammyButler_ pic.twitter.com/F8lEAWVrTR

A manhunt for the gunman ended shortly after 7pm when a 24-year-old suspect was apprehended at a service station 80km away, in Cornubia to Brisbane's southeast.

"This is not a random incident," Detective Superintendent Ben Fadian told reporters on Sunday. "The community should not feel concerned about their own safety as a result of this."

The alleged shooter lives at the unit block where the shooting occurred.

'Get him a doctor' pleads Navalny's daughter.

The daughter of hunger-striking Kremlin critic Alexei Navalny has called on Russian authorities to allow a doctor to treat her father in prison, a day after a group of medical professionals warned he is at risk of kidney failure.

Navalny, a fierce opponent of Russian President Vladimir Putin, started refusing food on March 31 in protest at what he said was a lack of proper medical care for acute back and leg pain provided by prison authorities.

Prison authorities say they have offered Navalny medical care but the 44-year-old opposition politician has refused it and insisted on being treated by a doctor of his choice from outside the facility, a request they have declined.

"Allow a doctor to see my dad," Navalny's daughter Dasha, a student at Stanford University, wrote on Twitter.

Allow a doctor to see my dad.

A medical trade union with ties to Navalny said on Saturday he was in a critical condition, citing medical tests it said showed that Navalny's kidneys could soon fail, which could lead to cardiac arrest.

A group of actors, writers, historians, journalists and directors, including Jude Law and J.K. Rowling, wrote an open letter to President Putin on Friday urging him to ensure Navalny gets adequate medical attention.

Trump supporters who stormed US Capitol claim they were journalists.

The Trump supporters who stormed the US Capitol in January documenting their actions and words in videos and social media posts, are claiming they are journalists or documentary filmmakers - there to 'record history' not join a deadly insurrection.

The group of at least eight defendants charged in the January 6 riot, are trying to mount a viable defence on the First Amendment's free speech grounds.

There are nearly 400 federal cases against those involved in the riots, which led to the deaths of five people, including a police officer, and hundreds of arrests.

Some people charged with storming the U.S. Capitol on Jan. 6 are claiming they were only there to record history as journalists, not join a deadly insurrection. They face long odds if video captured them acting more like rioters than impartial observers. \https://t.co/gesF5b4eSM

- UK health officials are investigating a COVID-19 variants originating in India but as of yet they do not have enough evidence to classify it as a variant of concern.

- Queen Elizabeth will mark her 95th birthday on Wednesday privately as traditional gun salutes are cancelled and Her Majesty remains in an official two-week mourning period following the death of her husband Prince Philip.

- At least three people have been killed in a shooting incident in an Austin, Texas, apartment complex, US authorities say.

- Egyptian authorities say 11 people have died after four carriages of a train derailed.

- A magnitude 5.9 earthquake has struck Iran, near where a nuclear power plant is located. 50 ambulances and rescue teams were sent to the epicentre but there have been no immediate reports of major damage.