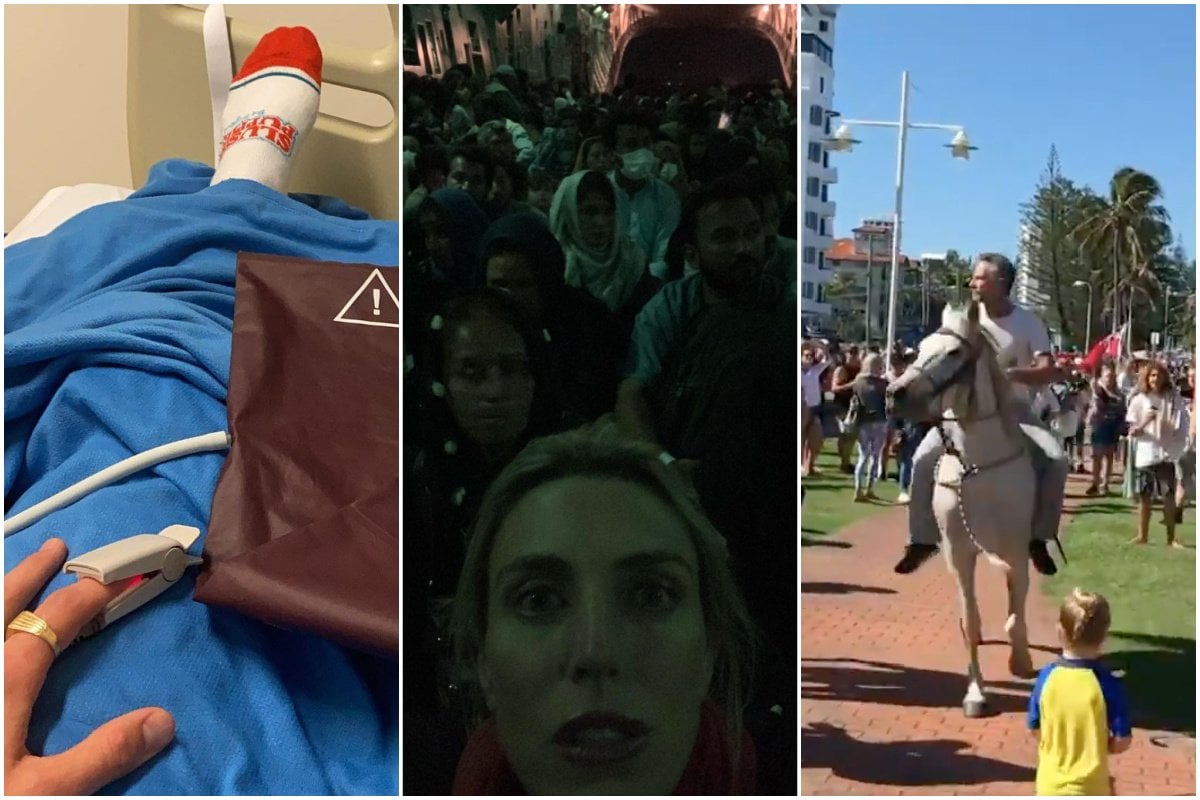 Those living in Sydney's coronavirus hotspots are waking up to their first day under a curfew and all of NSW must now wear masks outside their homes, as tougher lockdown measures take effect.

Following two consecutive days of COVID-19 case numbers over 800, a raft of new public health rules began at 12:01am on Monday.

READ: 'Do I have to wear a mask when exercising?' ﻿Your questions about NSW's COVID-19 rules, answered.

The harsher measures include a 9pm to 5am curfew for those who live in a dozen Sydney local government areas of concern, and statewide mandatory mask-wearing when outdoors, except if exercising.

Hardware stores like Bunnings, office supply stores and other retail premises must close in those 12 LGAs except for click-and-collect, and all exams and education activities will move online, except the HSC.

Bunnings Warehouse stores across Greater Sydney are set to temporarily close to the public tomorrow, as COVID-19 restrictions tighten. #9Newshttps://t.co/1VcxV416mR

All of NSW is currently in lockdown and police have ramped up enforcement of restrictions as authorities battle to contain the spread of the Delta strain.

NSW reported 830 locally acquired cases of COVID-19 in the 24 hours to 8pm on Saturday, another daily infection record, as well as three deaths.

A 21-year-old Sydney patient has posted on Instagram warning, "I can't stress this enough. Covid is NOT a joke and not to be played with. It's not the government trying to control you and I can 100% assure you this is not just a flu like some of you say it is."

Jett Stanton is at Liverpool hospital and says he's having "uncomfortable cold sweats, throat and chest is blocked, intense headache, unable to sleep, my anxiety disorder has had me have panics attacks to the point I passed out twice within three hours."

While he and his two unvaccinated housemates caught the virus, his fully vaccinated girlfriend was the only one spared.

"I am generally a very healthy young person and I still feel like my life is on the line. Please follow the lockdown rules as they are there for a reason and take care of one another," he said.

Vic protest 'most violent' in 20 years.

An anti-lockdown protest held in Melbourne on Saturday was one of the most violent the city has seen in 20 years, Victoria's top police officer says.

Chief Commissioner Shane Patton says his officers had no choice but to use non-lethal weapons to defend themselves from an angry mob that came armed and appeared intent on attacking them.

At least nine officers ended up in hospital after being pelted with projectiles, punched and kicked by members of a 4000-strong crowd who turned out to protest the city's COVID-19 lockdown.

In this video, you can see a police officer knocked to the ground at today’s protest in Melbourne. pic.twitter.com/HLBpcJwRB9

The mostly unmasked protesters let off flares, yelled slogans and blasted music as they moved through the CBD.

More than 200 people were arrested including some on remand for previous crimes. At least 19 will be taken to court rather than issued with fines in excess of $5000, and two people will face assault charges.

Mr Patton said he was disgusted by the conduct of some in the crowd.

"What we saw yesterday ... was probably one of the most violent protests we've seen in nearly 20 years," he told reporters on Sunday.

NSW Police also arrested 47 people and fined more than 260 in relation to planned protests in Sydney - successfully smothered - on Saturday.

READ: 7 police hospitalised and over $1 million in fines: What exactly happened at the anti-lockdown protests in Sydney and Melbourne.

They issued 137 tickets after stopping around 38,000 cars approaching Sydney's CBD, while a 32-year-old man who allegedly assaulted an officer was arrested and charges laid.

On Sunday, about 1000 people also rallied in Tweed Heads against the hard NSW-Queensland border, with video footage showing police officers dragging protesters away. NSW Police is yet to comment.

Victoria 'can still get on top of virus'.

A COVID-19 outbreak in regional Victoria is feared to grow, with health workers forced to isolate and the cluster now linked to cases at a Melbourne hospital.

Health Minister Martin Foley denies authorities have lost control of the state's latest infection wave but admits there's "great concern" about the scale of community transmission despite a Victoria-wide lockdown.

The state officially recorded 65 new locally acquired COVID-19 cases on Sunday, with 55 linked to current outbreaks and 10 mystery cases. Only 12 were in isolation while infectious.

Authorities listed more than 100 new exposure sites across Victoria on Saturday and about 11,000 close contacts are in quarantine.

All public sector staff will get up to half a day of paid time off to keep appointments for the two jabs they need for full protection, Mr Foley announced on Sunday.

He also promised a new vaccination blitz for residential aged care and disability workers at state-run facilities, including walk-up jabs at more than 50 centres.

Meanwhile, 20,000 regional Victorian businesses are now eligible for automatic cash payments of $5600, or $2800 per week, after being placed back under a lockdown on Saturday.

ACT Health is investigating whether a Housing ACT complex is a COVID-19 exposure location because of its connection to one of the current active cases in the territory.

At this stage there are no cases among the residents of the complex in Turner.

ACT Health Minister Rachel Stephen-Smith said five disability service providers had been affected by the outbreak, but warned this number could increase. Via @lucybladen and @KJBar https://t.co/Q3VetJMGXg

Chief Minister Andrew Barr announced 19 new cases on Sunday, just over double the number from the day before, but said this was the result of a slight change in the reporting cut-off time.

Seventeen were linked to previously known cases and two remained under investigation.

There are now 121 active cases in the territory, which remains under lockdown until September 2.

ACT Health confirmed one positive case was linked to the Australian National University .

Scott Morrison is banking on a "gear change" in the COVID-19 response not only to help the country exit the pandemic but also to lift the coalition's stocks as he considers when to call an election.

Federal parliament will sit for a fortnight from Monday with about a third of all members and senators present and the Delta strain of the virus spreading across the national capital.

It is expected the Senate chamber will be more than half-empty while fewer than 50 MPs will sit in the House of Representatives, under tight health rules including masks and temperature testing at entrances.

With steadily rising vaccination rates, the prime minister is confident the national plan, informed by Doherty Institute and Treasury modelling, is the right path out of the pandemic.

As of Saturday, just under 30 per cent of Australians aged over 16 had received two doses of the vaccine.

Will Australia get back to COVID zero?

Labor will seek to keep the pressure on the government over the slower-than-expected vaccine rollout and confusion over whether low case numbers will also guide the "gear change".

"If the prime minister (says) ... rising cases need not impact our plan to reopen, then he needs to release that advice," Anthony Albanese said.

Labor NSW senator Kristina Keneally said the people in her state and across Australia are paying the price for Mr Morrison's failures to provide sufficient vaccines doses and adequate quarantine facilities.

"Children are missing school, small businesses are closing, people in southwest Sydney in particular are distressed, locked down and highly uncertain about what their future holds," Senator Keneally told reporters in Canberra.

New Zealand is enacting new measures to fight COVID-19 after recorded 21 new community cases for the second day in a row, swelling the outbreak to 72.

The outbreak is New Zealand's first time dealing with Delta, the more infectious and potentially deadly variant of the virus.

Concerningly, a large proportion of infections have been among young people - who travel and gather more often than older people - growing the cluster further.

New Zealand has recorded 21 COVID-19 cases for the second day in a row, swelling the outbreak to 72. https://t.co/9IWGy5Sc3s

Of the 72 total cases, 66 are in Auckland and six are in Wellington.

Prime Minister Jacinda Ardern ordered the country into a nationwide lockdown after discovering one case, back on Tuesday.

She will convene her cabinet on Monday to confirm lockdown extensions for Auckland and Wellington, and consider restriction levels for the rest of the country.

The Taliban have fired in the air and used batons to force people desperate to flee Afghanistan to form orderly queues outside Kabul airport, a day after seven people were killed in a crush at the gates.

On Sunday, there were no major injuries as gunmen beat back the crowds and long lines of people formed, the witnesses said, and Washington said it was now able to get large numbers of Americans into the airport.

A NATO official said at least 20 people have died in the past seven days in and around the airport. Some were shot and others died in stampedes, witnesses have said.

British Prime Minister Boris Johnson called a meeting of leaders of the Group of Seven wealthy nations on Tuesday to "ensure safe evacuations, prevent a humanitarian crisis and support the Afghan people".

Panicked Afghans have tried to board flights out, fearing reprisals and a return to a harsh version of Islamic law the Sunni Muslim group exercised while in power two decades ago.

Leaders of the Taliban, who have sought to show a more moderate face since capturing Kabul last Sunday, have begun talks on forming a government.

The United States and other foreign countries including Britain have brought in several thousand troops to help evacuate foreign citizens and vulnerable Afghans, but have been careful to avoid clashes with the Taliban.

Olympic venues considered as medic centres as Paralympics prepares to get underway.

Authorities in Tokyo are considering plans to convert some of the city's Olympics and Paralympics venues into temporary medical facilities as they combat soaring COVID-19 infections.

Japan's fifth wave of infections, which is being driven by the highly infectious Delta variant, has prompted the government to extend pandemic emergency measures in Tokyo and other regions until September 12.

Planners of the Paralympics, set to run from Tuesday until September 5, agreed last week to hold the Games generally without spectators, a measure taken at the recently concluded Olympics.

Medical experts have urged temporary use of facilities owned by the Tokyo government, such as the Tokyo Aquatics Centre, site of swimming competitions, and the Musashino Forest Sport Plaza used for badminton, the Sankei newspaper said.

Authorities in the Japanese capital are considering plans to convert some of the city's Olympics and Paralympics venues into temporary medical facilities as they combat soaring COVID-19 infections that have piled pressure on the healthcare system. https://t.co/XgpBPigwGj

However, the earliest they could be drafted into use would be after the Paralympic Games, the paper said, adding that more time might be required to complete arrangements.

On Friday, Paralympics organisers said the Games would be held in "very difficult" circumstances, with Tokyo hospitals overstretched in the COVID-19 battle.

Thirty new daily infections were confirmed on Sunday among Paralympic participants, the highest such figure yet, broadcaster NHK quoted organisers as saying.

- At least 21 people have died and 50 others are reported missing in after heavy flooding hit parts of Tennessee, US authorities say.

- Nashville radio host Phil Valentine - who questioned whether it was necessary for all people to get COVID-19 vaccines - has died from the virus. His brother says he regrets not being more "vehemently pro-vaccine."