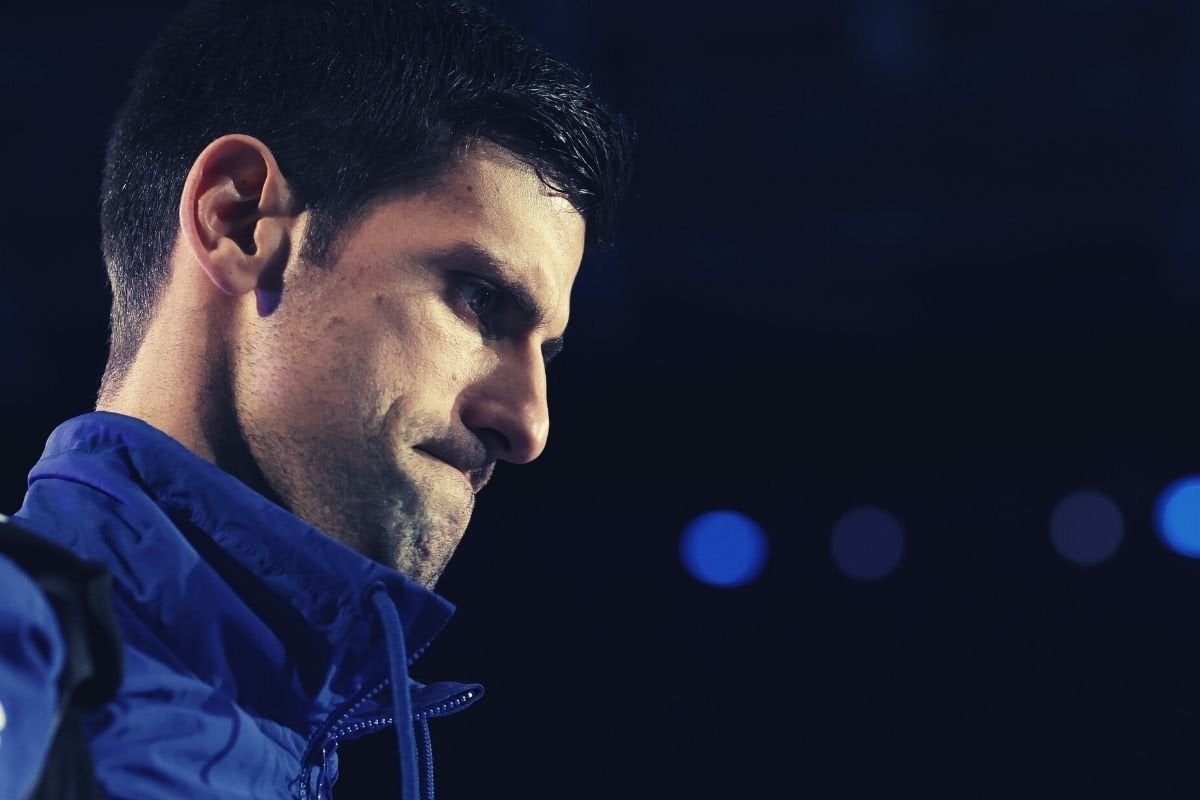 When you run a marathon, you keep your legs pumping on the pavement because you know there's a finish line waiting at the end.

You have a goal. You can taste the feeling of making it to that end point.

But with COVID, a marathon we've been running for two years now, the virus keeps moving the finish line.

Just when we think we can see it, there's another bloody hill.

I'm tired of metaphorically running this marathon. Are you? As we entered 2022 with spiralling COVID cases, returning restrictions and cancelled Christmas plans, we are a nation defeated. We did everything asked of us; we followed the government's rules and regulations; we stayed home; we got vaccinated; we checked in; we lined up.

This was supposed to be our year! Until Omicron and some poorly executed reopening strategies decided to throw all of our plans into disarray.

It was at that particular precarious moment that world tennis No.1 Novak Djokovic entered the chat.

Look. Anger is an easy emotion to jump to in a time of distress. It's also easier when you can direct that anger at a single thing, or in this case, a single person. So a lot of us did just that, we got angry at the whole tennis debacle.

Angry that Novak Djokovic was given an exemption to enter Australia, when he wasn't vaccinated.

Angry that so many family and friends still aren't able to enter, despite being vaccinated.

Angry that our government didn't make the call on Djokovic's visa before he arrived, which would have saved us from looking like idiots on a world stage as they now battle it out in court.

Angry that there are 33 refugees holed up in the same immigration detention hotel as Djokovic, some of whom have been locked up for nine whole years for the 'crime' of seeking refuge from the horrors at home.

The Quicky
ADVERTISEMENT
Video via Twitter/@MehdiAli98.

Angry that when Djokovic apparently had COVID in December (the reason for his medical exemption), he was pictured hugging children.

Of course there was also a contingent who were angry for opposite reasons. Fans of the tennis star were furious that he was being denied entry in the first place, let alone being locked up when he arrived. Their anger turned into violence at a protest outside Djokovic's lawyers' office in Melbourne on Monday.

But the thing I've come to realise after sitting with my own Djokovic anger this week, is that I am not actually that angry at him. Sure, I am frustrated that he's not following the medical advice in getting vaccinated. To me that's a selfish, ill-informed decision.

But I am much more angry at our governments for their lack of foresight, continual stuff-ups (namely, the vaccine-rollout, failure to order enough rapid antigen tests, a failure to look after our exhausted, underpaid and understaffed health system and an inhumane approach to border exemptions for those who were and are vaccinated).

But above everything I am angry at the pandemic. That it's even here in the first place.

Our lives have not been 'normal' for years now, and it's all thanks to COVID-19. We're sick of it. We're broken. We're ready for this marathon to be over.

And so Djokovic was the final straw. He provided an easy outlet for our anger after conveniently arriving smack bang in the middle of another great big COVID come-down. A moment where we finally thought we'd reached that finish line, only to turn the corner and see a giant Omicron shaped mountain.

We're a country on the edge.

An Australia that's entered a new year that looks different to how we'd hoped it would.

But it's not Djokovic's fault. He was a poorly timed irritation.

Our anger and outrage can be more productively directed towards the government. They're the ones leaving us high and dry in a time of need without any tests, or plans or certainty. Hell, we don't even have enough produce on supermarket shelves at the moment.

Let's focus our attention on those who can actually help get us out of this mess.

Reply
Upvote
This individual story is just another of rich and famous sports stars expecting and often getting special treatment (ringing a bell footy fans?).
D
dee dee 16 days ago

Reply
Upvote
6 upvotes
The Australian government has had enough time to deal with this current outbreak in the best manner it could.
They can’t mitigate all circumstances but the federal government and nsw government has allowed this current situation to occur through sheer mismanagement and appropriate preventative measures.
It was always had the potential to be bad but it did not have to be this bad . Letting it rip indeed! ScoMo telling people not to get tested if not symptomatic but to go to the beach or read a book under a tree. Really? What about the frontline and healthcare workers ? Essential industry , hospitality workers? What about people who are vulnerable , live with a disability , aged, experiencing dv? Beach and a book?
The situation with Djokovic has been used as a displacement for the serious bungling going on.
I feel for people who cannot return to Australia but this has managed to pass through.
I also question how much power tennis Australia was given in providing exemptions.
There is a disconnect here somewhere . The information on Covid status and vaccination was made perfectly clear to tennis Australia well before this whole thing erupted yet they still provided an exemption for Djokovic. It all feels a bit sneaky , no one will notice , he’s the world no 1 .
I reserve my anger and frustration, helplessness and disgust ,in this situation, for the way in which refugees in this country and offshore are treated. It is appalling that for a lot of people they only became aware of refugees’ plight because of Djokovic.
I also find it abhorrent that people who are pro Djokovic are disgusted by his treatment at the hands of the Aus government . And are feeling free to expound their theories on social media , Kyrgios to start.
It is completely tone deaf and the whole row over it misses the point.
Australia’s treatment of its refugees is horrendous .it has been for a really really long time. Successive governments have compounded the previous’ mistakes and inhumane treatment . Seriously in what go other government department would it be ok to take 9 years to process an application or paperwork? ( unless you’re a pro tennis player in which case it’s a matter of days).
If people want to be embarrassed about the government than be bloody embarrassed and ashamed about this.
https://aran.net.au/ Australian Refugee Action Network
News
General
Opinion
True Crime
Politics
Sport
Explainer
Entertainment
Celebrity
Reality TV
Movies
TV
Books
Rogue
Royal
Lifestyle
Beauty
Fashion
Weddings
Home
Wellness
Health
Fitness
Travel
Food
Parents
Before The Bump
Pregnancy
Baby
Kids
Teens
School
Parent Opinion
Work & Money
Money
Finance
Career
Lady Startup
Relationships
Sex
Dating
Separation
Friendship
Family
Real Life
Couples