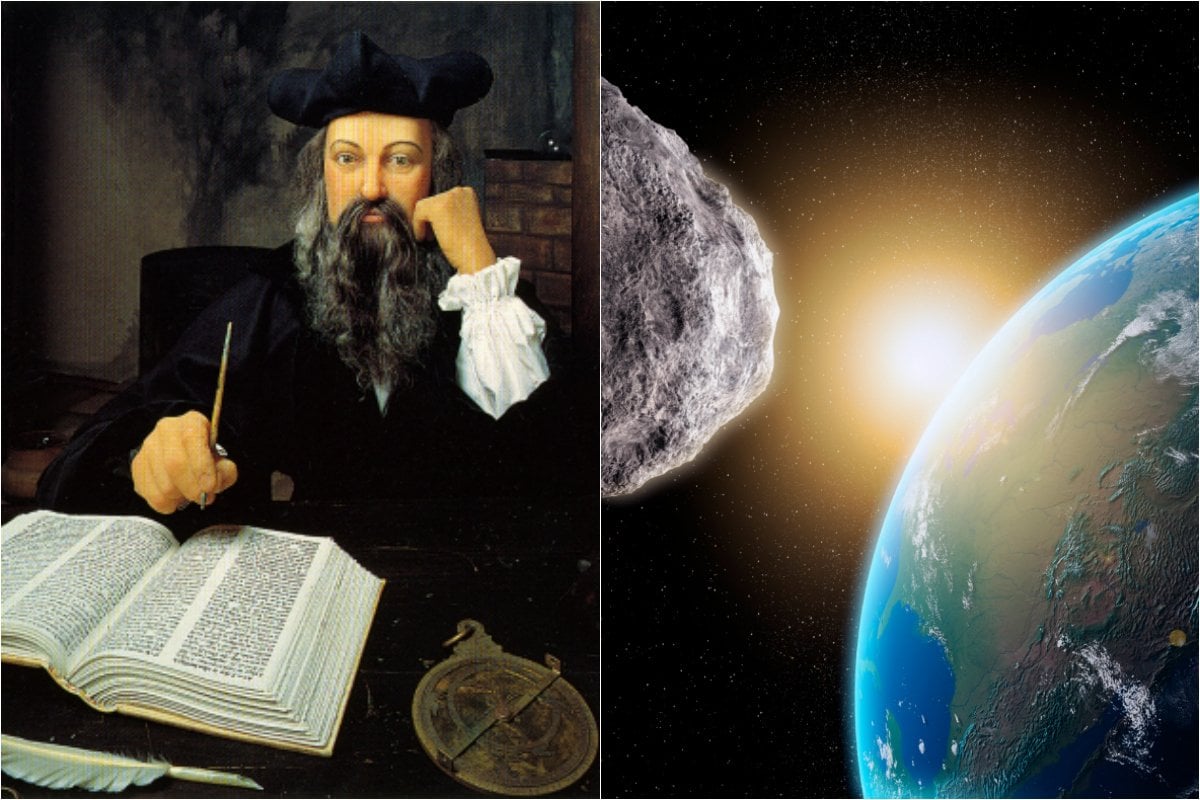 Can you hear that? It's the chorus of crowds counting down the seconds to the end of 2020 - a year that will forever be synonymous with calamity.

Alas, a new year is upon us and we can only hope that more *precedented* times will return to our lives.

Whilst the world is hoping 2021 will be full of hope and optimism, there is one man who has forecast another disastrous year akin to the events of 2020.

Michel de Nostredame, a French astrologer who lived 500 years ago and is famed for his clairvoyant abilities, has apparently seen into the future and he is predicting... a Zombie Apocalypse in 2021.

Watch: A 2020 Zoom call from the future. Post continues below.

His grave projections are gaining traction worldwide, with people shouting that we all need to listen because this man also foreshadowed significant historical events such as the rise of Hitler, the Second World War and the assassination of John F. Kennedy.

We're pretty sure in recent years The Simpsons has inadvertently made more accurate predictions than Nostradamus but it doesn't matter. Nostradamus is predicting a Zombie Apocalypse and yes, we're listening.

Here are just five of Nostradamus' predictions for 2021.

Well. According to Nostradamus, a biological weapon created by Russian scientists will transform people into zombies. The "half-dead" beings will cause "great evils to occur," resulting in "the world to end".

Oh. Apparently a Zombie Apocalypse is not bad enough.

Nostradamus has also predicted a famine to occur on an unprecedented scale in 2021.

"After great trouble for humanity, a greater one is prepared, The Great Mover renews the ages: Rain, blood, milk, famine, steel, and plague, Is the heavens fire seen, a long spark running," he wrote.

Listen to The Quicky, Mamamia's daily news podcast. On this episode, we look back at everything that happened in 2020. Post continues below.

In 2021, catastrophic damage will apparently be caused to the planet by significant solar storms.

"We shall see the water rising and the earth falling under it," Nostradamus wrote.

The astrologist added that these changes to the climate will lead to mass migration, the world fighting over resources and resulting in wars and conflicts.

4. A comet will hit the Earth.

The prediction of an asteroid crashing into the Earth's surface is next and look, we can certainly deduce that Nostradamus was not an optimist.

"In the sky, one sees fire and a long trail of sparks," wrote the French seer.

Many have said this could refer to an asteroid NASA has been tracking called 2009 KFI, however the space agency said in 2009 that the "refined path indicates a significantly reduced likelihood of a hazardous encounter with Earth". Oh, and it's also not predicted to get even close to Earth until 2036. So... unlikely.

In the theme of catastrophic events, Nostradamus also predicted a calamitous earthquake.

"The sloping park, great calamity, Through the Lands of the West and Lombardy The fire in the ship, plague, and captivity; Mercury in Sagittarius, Saturn fading.”

It has been widely reported that "the Lands of the West" refers to California, and that "Mercury in Sagittarius, Saturn fading", indicates November 25 - the next date when planets Mars and Saturn will be in this position.

Well. That is quite the list of projections. Like we said though, we think The Simpsons have had more luck in recent years predicting the future.

You can read the rest of Nostradamus' predictions here.

Reply
Upvote
1 upvotes
If just one of these events happened and pretty much wipes out the world then wouldn't that cancel out the other events happening?
taradb 23 days ago