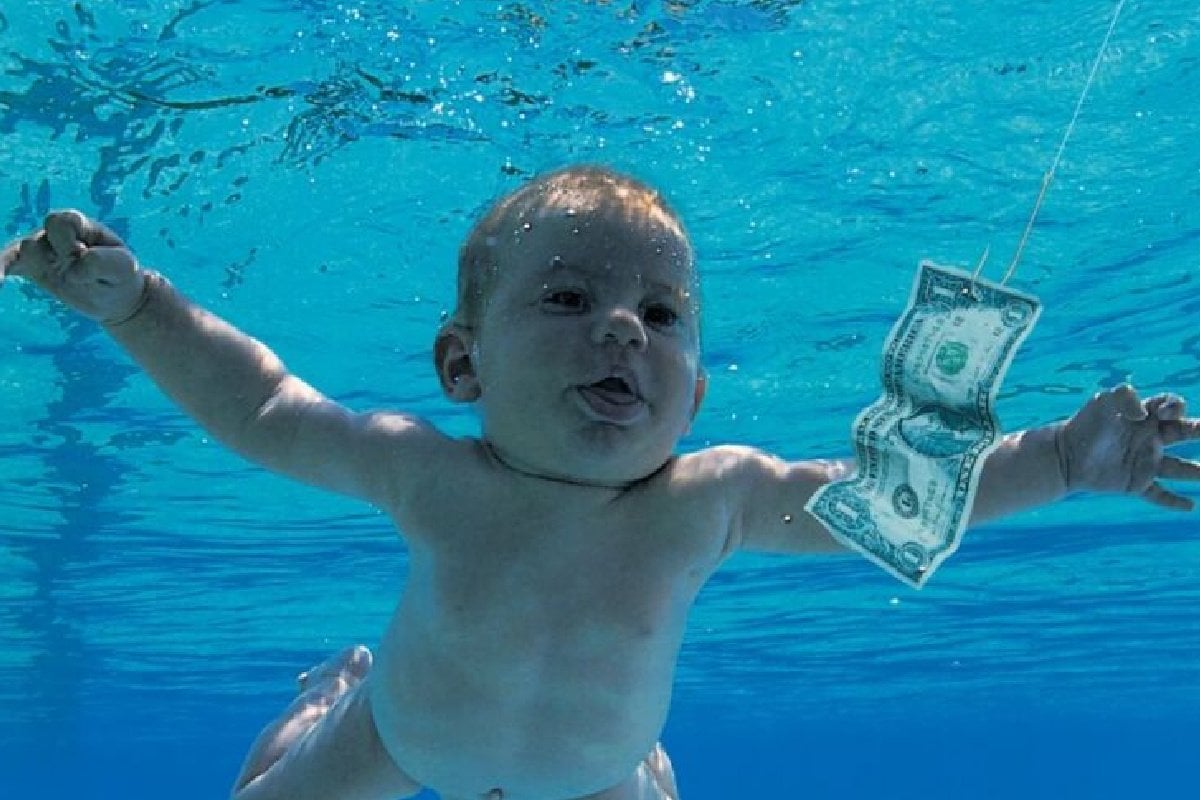 The baby who featured on the famed cover of Nirvana's 1991 Nevermind album - who is now 30 - has sued the band for alleged child sexual exploitation.

Spencer Elden was four months old when he was pictured in a pool at a swimming centre in Pasadena, California.

He was shown naked underwater while appearing to follow a dollar bill being pulled along on a fishhook, in what has become one of the most famous album covers of all time.

Nevermind, powered by the band's most recognisable singles including Smells Like Teen Spirit, Come As You Are and Lithium, was a massive critical and commercial success, propelling grunge band Nirvana to global stardom.

Elden has now sued the group, the photographer who took the picture, their record label and the individual members - including the estate of late Nirvana frontman Kurt Cobain - alleging the picture constitutes child pornography as it shows his genitalia.

The lawsuit, filed in federal court in California on Wednesday, claims the defendants "failed to take reasonable steps to protect Spencer and prevent his widespread sexual exploitation and image trafficking".

As a result, it is alleged, Elden "has suffered and will continue to suffer lifelong damages".

The lawsuit says Cobain, who died in 1994 aged 27, was "instrumental" in choosing the album cover.

After meeting resistance over the picture, it is claimed, Cobain agreed to strategically place a sticker over the baby's private parts with the text: "If you're offended by this, you must be a closet paedophile."

However, the cover was released without the redaction and depicts "commercial child pornography", it is alleged.

"Spencer's true identity and legal name are forever tied to the commercial sexual exploitation he experienced as a minor which has been distributed and sold worldwide from the time he was a baby to the present day," it says.

"Neither Spencer nor his legal guardians ever signed a release authorising the use of any images of Spencer or of his likeness, and certainly not of commercial child pornography depicting him."

It claims Elden experienced permanent hardship, including but "not limited to extreme and permanent emotional distress with physical manifestations, interference with his normal development and educational progress, lifelong loss of income earning capacity, loss of past and future wages, past and future expenses for medical and psychological treatment, loss of enjoyment of life, and other losses to be described and proven at trial of this matter," the lawsuit states.

Elden's lawyers are requesting $US150,000 ($A206,879) in damages from each of the defendants, plus legal fees, an injunction to prohibit all parties "from continuing to engage in the unlawful acts and practices described herein," and a trial by jury.

Singer Courtney Love was married to Cobain at the time of his death and is named as a defendant in the lawsuit as executor of her late husband's estate.

She appeared to acknowledge the legal action, writing on Instagram: "I've got nothing much on my mind. Except weird lawsuits."

The story behind the cover.

Elden was four months old when he was photographed for the cover.

He was involved in the band's album shoot because his father was friends with the photographer, Kirk Weddle.

"I don't think my parents really gave my taking part in this shoot too much thought. They knew who Nirvana were, but weren’t really into the grunge scene," Elden said in a 2015 essay for The Guardian.

"I was four months old and my dad was attending art school at the time, and his friends would often ask for help with their projects. So his friend the photographer Kirk Weddle called him and said, 'Do you want to make some money today and throw your kid in the pool?' And he agreed.

"My parents took me down there, apparently they blew in my face to stimulate my gag reflex, dunked me in, took some pictures, and pulled me out. And that was it. They were paid $200 and went to eat tacos afterwards. No big deal." 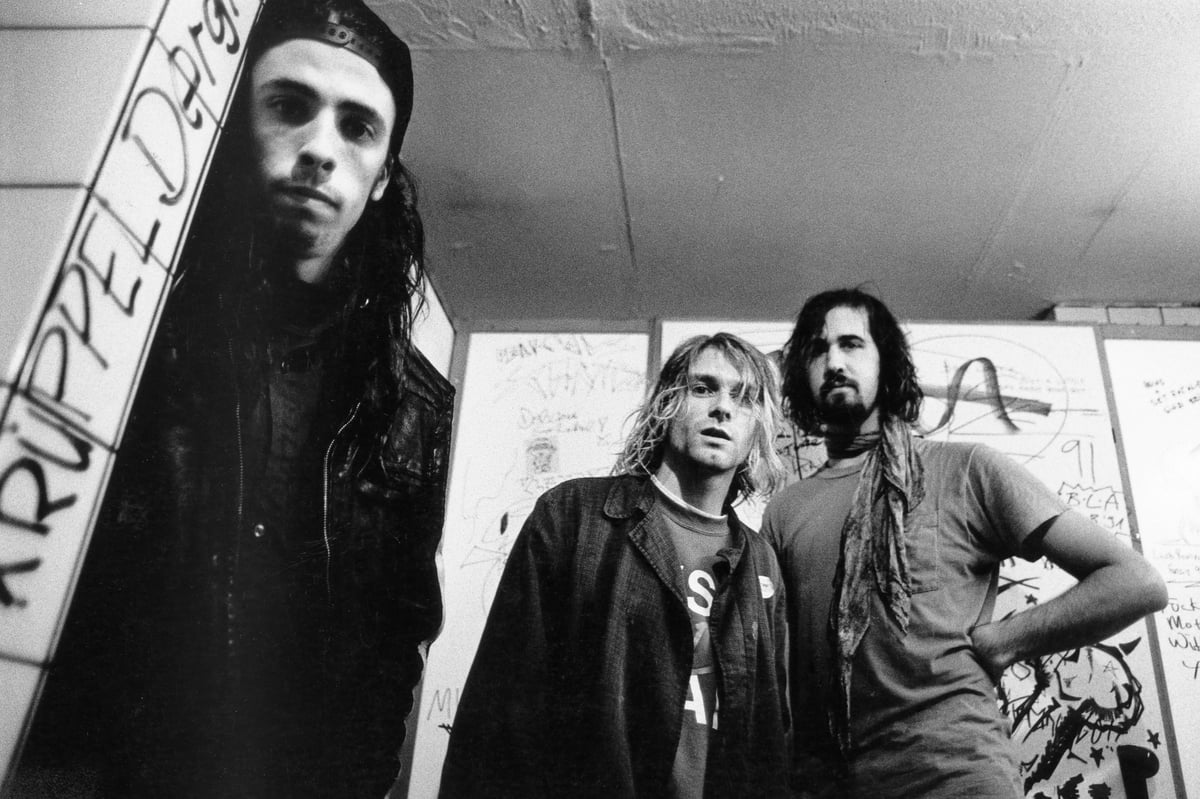 The original cover idea was to feature an underwater birth, after Cobain saw a documentary.

"[He] thought the image would make a cool cover. That vision was a bit too graphic, so we went with the swimming baby instead," Robert Fisher, who designed the cover, said.

Photographer Weddle told The Guardian in 2019 that he was still in contact with Elden.

"I used to think, 'Man, when that kid is 16 he's gonna hate my guts!' He doesn't, but he's conflicted about the picture. He feels that everybody made money off it and he didn't. I think he deserves something. But it's always the record labels that make the money."

Elden has recreated the cover multiple times, but expressed ambivalence in interviews.

And in a 2016 interview with GQ Australia on the 25th anniversary of the album's release, he said his views about it had changed over time.

"I've recently been thinking, 'What if I wasn't OK with my freaking penis being shown to everybody?' I didn't really have a choice," he said.

Nirvana formed in Aberdeen, Washington, in 1987, emerging from the Seattle grunge scene to become one of the biggest bands in the world.

They have sold more than 75 million records around the world but stopped performing together following Cobain's death.

Reply
Upvote
6 upvotes
This is a naked grab for money.
Funny how history repeats.
Sue your parents, bro.
C
cat 3 months ago

Reply
Upvote
@gu3st  his parents aren't the ones who profited by exploiting him.
G
gu3st 3 months ago

Reply
Upvote
2 upvotes
@cat They were his guardians and allowed this 'travesty'.
C
cat 3 months ago

Reply
Upvote
@gu3st no ones saying they made great choices, but they didn't end up with the money. Not much point suing someone who cant actually pay compensation.
S
snorks 3 months ago

Reply
Upvote
3 upvotes
@cat LOL so don't blame the people who made the mistake, just go after the people with the money?
Sound legal reasoning.

Reply
Upvote
@rush Ownership is pretty complicated.
From a somewhat brief Google search:
Yes, the photographer owns the photo, but can not necessarily use that photo for commercial purposes without a model release, which this one was.
Complicating that, the model was paid for the shoot which would tend to indicate that it was going to be used for commercial purposes, but not necessarily.
Complicating that further, the photograph was taken on commission from Cobain, so it can be said that the person who commissioned it could be the owner.
Unless, Cobain simply bought it from the photographer rather than commissioning it, which is a whole new set of issues.
M
mamamia-user-482898552 3 months ago