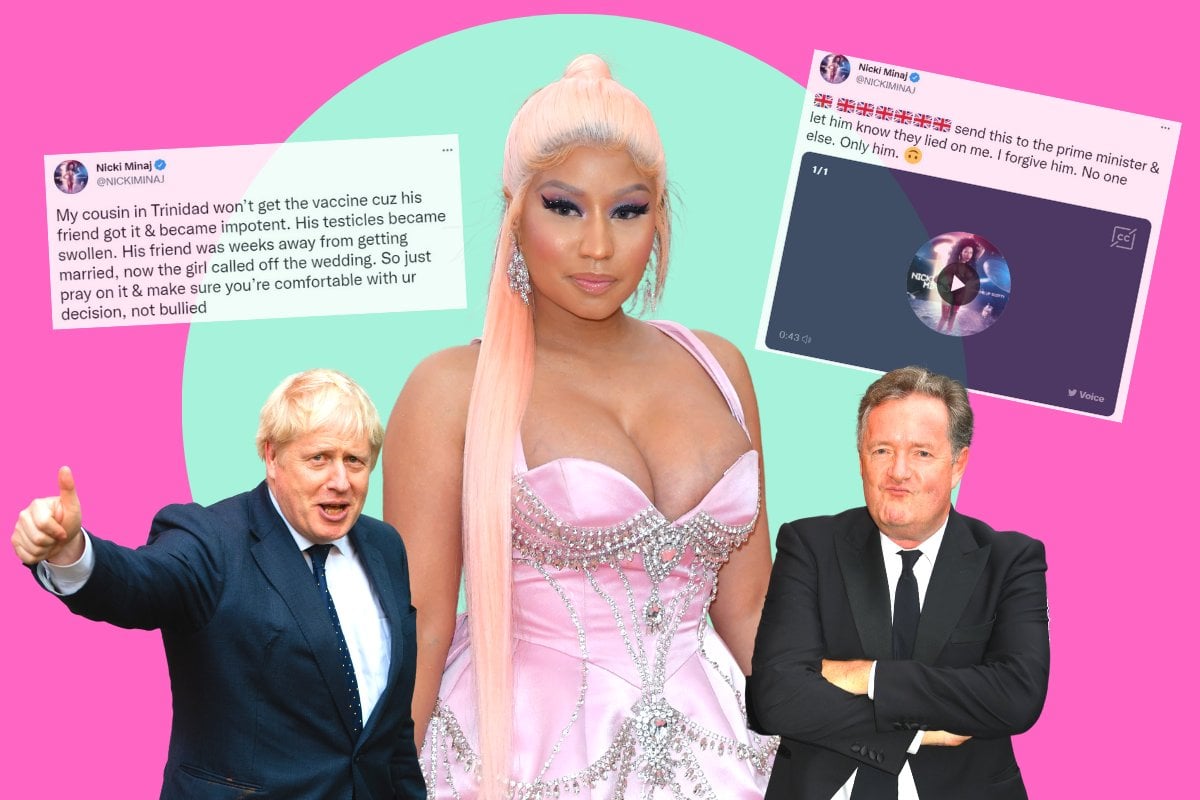 Why yes, that is one of the weirdest headlines of my career.

Gather around mates, because we are here to discuss Nicki Minaj's cousin's friend's balls. They're in a bad way, apparently, and Minaj told everyone about it on Twitter.

These truly are unprecedented times.

It began in the same way all wild pop culture stories do, with the Met Gala. Before the Gala, Minaj tweeted she wasn't going to the event, citing her 11-month-old son as the reason she did not want to travel.

But then she mentioned all attendees must be fully vaccinated, which she is not.

They want you to get vaccinated for the Met. if I get vaccinated it won’t for the Met. It’ll be once I feel I’ve done enough research. I’m working on that now. In the meantime my loves, be safe. Wear the mask with 2 strings that grips your head & face. Not that loose one 🙏♥️

While that on its own was eyebrow raising for some, it had nothing on what happened next... an unprompted message about her cousin's friend's swollen genitals, which he had falsely equated to a COVID-19 vaccination side effect.

"My cousin in Trinidad won’t get the vaccine cuz his friend got it and became impotent," she wrote.

"His testicles became swollen. His friend was weeks away from getting married, now the girl called off the wedding.

"So just pray on it and make sure you're comfortable with your decision, not bullied."

My cousin in Trinidad won’t get the vaccine cuz his friend got it & became impotent. His testicles became swollen. His friend was weeks away from getting married, now the girl called off the wedding. So just pray on it & make sure you’re comfortable with ur decision, not bullied

Because apparently it does not go without saying, swollen balls are not a side effect of any COVID vaccine. It sounds a lot like a cover up for something... else... which can make your genitals swell and is more likely to see you get dumped weeks before your wedding. But hey, what could I possibly know about Nicki Minaj's cousin's friend's balls?

Minaj went on to say she would probably get the vaccine eventually because she would need it to tour, and also retweeted positive vaccine experiences from fans, but there was no way that was going to make everyone gloss over the... swollen testicles.

It's been a couple of days since, and in that time Minaj has feuded with Boris Johnson AND Piers Morgan, health departments have rapped about vaccines, and of course, the memes have been as good as you'd hope.

Earlier in the week, Nicki's tweet came up in a UK press conference (shout out to the journalist who asked about this - you're out there doing God's work) and was criticised by UK Prime Minister Boris Johnson.

"I'm not as familiar with the works of Nicki Minaj as I probably should be," Johnson said. 10 Downing Street's letterbox is about to be stacked with copies of Pink Friday.

"But I am familiar with the work of [Dr] Nikki Kanani, who is a superstar GP of Bexley who will tell you that vaccines are wonderful and everybody should get them, so I would prefer to listen to her," he continued.

thinking about the bars Nicki will spit about this 🙂 pic.twitter.com/c505RgvfkC

In response, Minaj uploaded a 43-second video memo of her pretending to be British, saying she went to Oxford with... Margaret Thatcher.

It's the most chaotic thing I've heard all year.

🇬🇧 🇬🇧🇬🇧🇬🇧🇬🇧🇬🇧🇬🇧 send this to the prime minister & let him know they lied on me. I forgive him. No one else. Only him. 🙃 pic.twitter.com/ZmJ2sST8Es

I can only assume that after this, Piers Morgan received some kind of bat signal telling him there was drama happening on the internet, so he sprung into action.

Morgan tweeted Minaj was "ghastly", "one of the rudest little madams" he's ever met and "pedalling lies that will cost lives".

Minaj then was like... 'why is this man who I have never met attacking me', except it turned out they HAD met, when Minaj was a guest performer on America's Got Talent.

Sir I’ve never met you. I know… we all look alike. “Rudest little madam”. I like it. Has a special ring to it. Thanks Pierce. Love the accent. I’d love to come chat. Scones. Tea. Clown nose & big red shoes for you. Lmk babe 😘😍 https://t.co/9Evnhnuj9l

Morgan said Minaj had been "too busy" to say hello to his kids, to which Minaj responded he needed to "stop fkng lying".

Stop fkng lying. I never turn down pics with kids. If a middle person told you that, they were out of line. don’t blame me you stupid piece of shit. https://t.co/3zkFCOHwYu

Minaj then really leaned into the controversy, tweeting a video of Fox News' Tucker Carlson talking about her, defending her decision to do so, and also joking about references on US late night talk shows.

Right. I can’t speak to, agree with, even look at someone from a particular political party. Ppl aren’t human any more. If you’re black & a Democrat tells u to shove marbles up ur ass, you simply have to. If another party tells u to look out for that bus, stand there & get hit https://t.co/OhjQZCbmBa

Trinidad officials spent all day trying to track down the man with swollen balls.

Trinidadian officials responded to the claims during a televised COVID-19 update on Wednesday, saying they had "wasted so much time" trying to confirm or debunk Minaj's claim by spending most of Tuesday trying to find out if there had been a case of swollen testicles in the island.

🇹🇹Minister of Health Terrence Deyalsingh says claims made by @NICKIMINAJ are Not True! pic.twitter.com/dcApHfsq1n

Turns out... if Minaj's cousin's friend's balls are swollen, he's keeping them hidden.

"As we stand now, there is absolutely no reported such side effect or adverse event of testicular swelling in Trinidad," Trinidad and Tobago Health Minister Dr. Terrence Deyalsingh said Wednesday morning.

"Unfortunately, we wasted so much time yesterday running down this false claim."

That's not... a great use of their time.

There's obviously been a response from other health officials too.

We promise to leave the rapping to @NICKIMINAJ if she leaves medicine to doctors and scientists pic.twitter.com/pqv00rNi0l

In the United States, Dr Anthony Fauci told CNN "she should be thinking twice about propagating information that really has no basis."

Minaj was also offered a call with a White House doctor to "answer questions she has about the safety and effectiveness of the vaccine."

There is much to be said about vaccine hesitancy and anxiety. It's a problem around the world, and officials really don't need the headache caused by Minaj's cousin's friend's balls.

But boy oh boy, were the memes swift and GREAT.

“so then the trinidad & tobago government looked into the situation and found out that nicki minaj’s cousin’s friend’s testicles never actually got swollen” pic.twitter.com/hmg1QxbFmK

society if nicki wasn’t asked abt going to the met gala pic.twitter.com/WWUcjfk8DV

Nicki Minaj cousin’s friend in Trinidad when he finds out that Nicki told the entire world about him being impotent and having swollen balls lmfao pic.twitter.com/Kqd4Izbo48

The world is a strange place, huh. If you want to catch up with your own cousin's friends, get vaccinated.

Reply
Upvote
1 upvotes
Oh, please. She's "doing her research". Ding-ding-ding: we have another anti-science anti-vaxxer, full of hubris. The Dunning Kruger effect in full flight there.