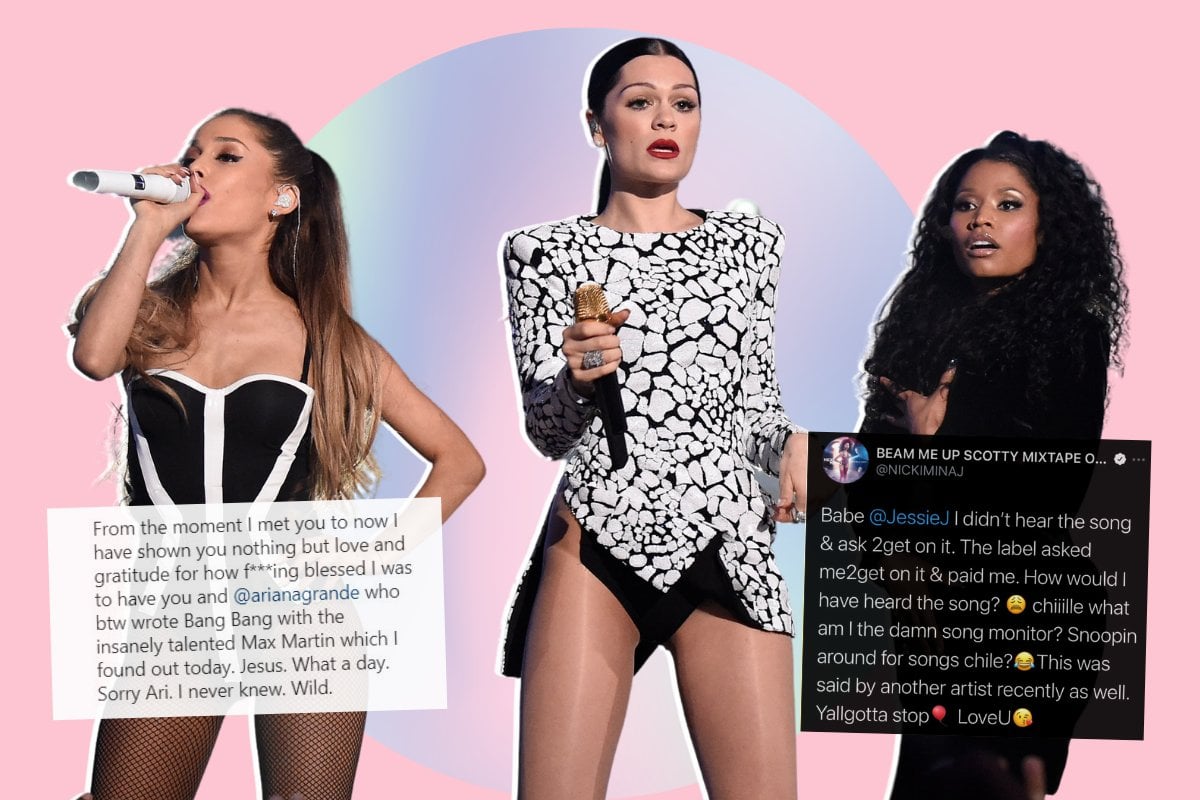 You're Googling 'what is conscious uncoupling' and planning your ice bucket challenge.

You've switched on the radio, because you're boycotting iTunes over that fkn U2 album, and 'Bang Bang' by Jessie J, Ariana Grande and Nicki Minaj is playing. For the millionth time today.

Side note: our fave celebs doing impressions of other celebs. Post continues below video.

As much as U2 tried, the biggest songs of 2014 didn't include them at all. Instead, the year was dominated by Pharrell's incredibly annoying earworm 'Happy', the introduction of Kiwi queen Lorde with 'Royals', and 'Bang Bang', a certified banger involving three of music's biggest names: Ariana Grande, Nicki Minaj and Jessie J.

On August 5, Jessie J discussed the origins of 'Bang Bang' for Glamour's 5 Songs, 5 Stories series. And uh, it turns out she's had it all wrong for years.

What did Jessie J say?

Jessie J told Glamour 'Bang Bang' was written by Swedish producer Max Martin, and that when she and Grande were both played it and decided to jump on the song together.

She said Minaj asked to join her and Grande on the Grammy-nominated track.

"Nicki was played it in the studio and was like, 'I've got to jump on this,'" she said. "We didn't go to her and ask; she wanted to do it.

"I'll never forget: I was in my bedroom in my flat in London, and I got sent the version with Nicki on it. I just sat at the end of my bed holding my phone, staring at the floor, going, 'How the f*** did I land this?' I literally felt like I'd won a competition."

Minaj remembers thing differently, and addressed it directly in a (since deleted) tweet.

She went on to ask if she's the "damn song monitor" who's "snoopin around for songs," noting something similar "was said by another artist" recently also. She ended positively with "LoveU."

.@NICKIMINAJ clarifies the label asked her to be apart of “Bang Bang” with Jessie J and Ariana Grande. pic.twitter.com/UTRGao6Ehx

Minaj fans were quick to point out that the narrative that the rapper asks to feature on songs has been used in the past to discredit her influence, and Minaj liked a series of tweets in support of her speaking up.

Ok. And then Jessie J posted an apology?

Yep, and a lengthy one at that.

Jessie J addressed their "weird energy" and publically apologised not only to Minaj, but also to Grande, as it turned out she was wrong about 'Bang Bang' already existing before they heard it. Grande was in fact a co-writer of the song years beforehand, and passed on recording it because she... just didn't like.

"I'm sorry I got the story wrong all these years [later]," she wrote, noting she respects Minaj for publicly being herself.

"I was told you heard the song and wanted to be on it by someone clearly gassing me up at the label. (Bless them and my naïve ass) Thank you for clarifying I was wrong on that."

But the apology also seemed a bit... snarky, in parts.

"What a way for us to celebrate the seven-year anniversary of the song. Should we all go for dinner? No… Probably not right... Too soon? 'Bang Bang' part two?… No... Ok got it," she wrote.

What about Ariana Grande?

Grande has said in the past how much she dislikes the song 'Bang Bang', so she is probably pretty unbothered by this whole thing.

In 2018, Grande tweeted about her outright dislike for the single when suggesting her Sweetener tour "sounds really nice. lots of new material + oldies (the oldies we like). I mean unless y'all wanna hear bang bang again."

When a fan responded, "GIRL I NEVER WANNA HEAR THAT S*** AGAIN," Grande replied "thank God. Can't wait to show this to my team."

thank god. can’t wait to show this to my team.

Okay so this really should be the end of this. Right? RIGHT? I mean, THE SONG IS SEVEN YEARS OLD AND THIS IS SO RANDOM.

Turns out, nah. There's more, mostly due to the fact that Jessie J shared an image of Cardi B to her Instagram story to commemorate the one-year anniversary of 'WAP'.

Cardi B and Minaj have long been positioned as rivals and have a complicated history.

On the bright side, this has probably all led to an increase in 'Bang Bang' streams.

And there's been some really great memes.

Nicki when she was being the song monitor and heard Bang Bang pic.twitter.com/f2Xn4EXPj8

Cardi B now that Jessie J has attempted to drag her into this Bang Bang mess unprovoked: pic.twitter.com/0NkdtRR9Oy

But we wouldn't hold our breath for a remix.