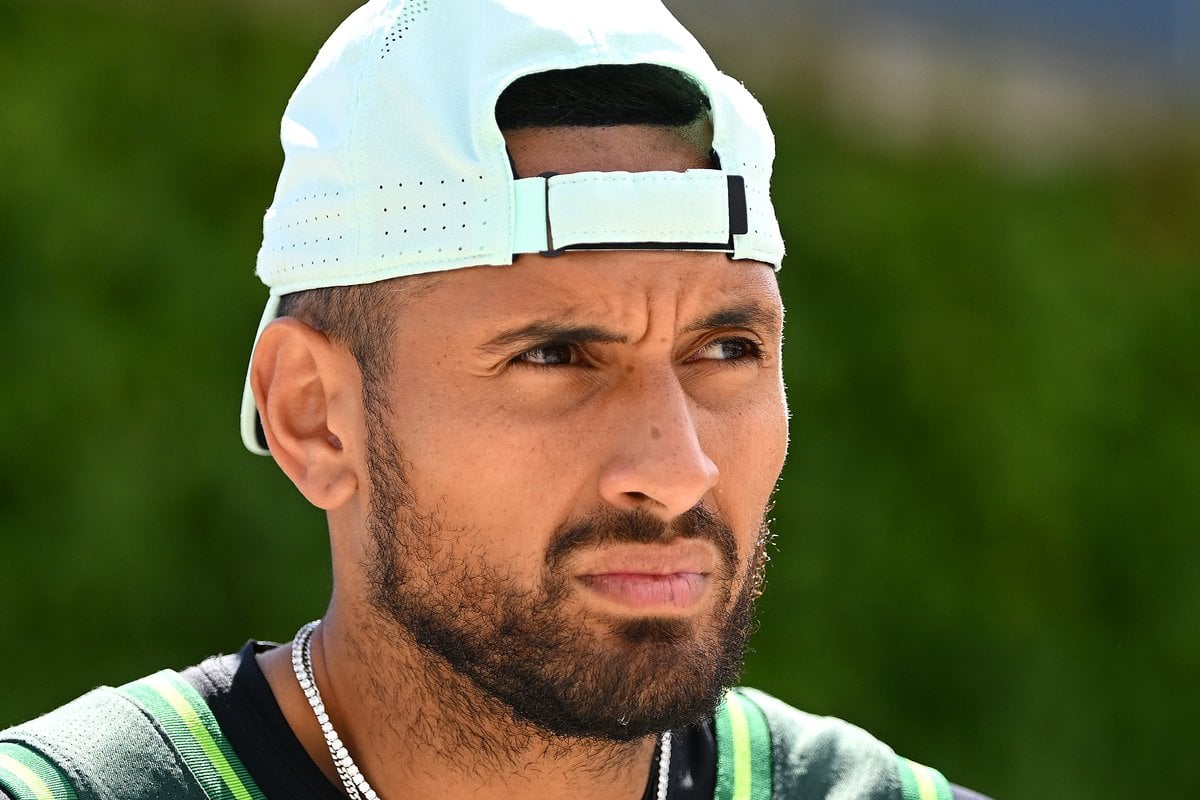 This weekend, Australia faces a reckoning.

The story has been plotted so expertly it is closer to the stuff of fiction.

He wears his fatal flaw as freely as he wears his red Air Jordans onto a court with an all-white dress code. As Todd Woodbridge puts it, Kyrgios' greatest obstacle will always be what lies between his two ears. He has a temper. He loses control. He doesn't even like tennis all that much. Sometimes, he'll be midway through a match and just give up. He descends into unsportsmanlike behaviour, blaming a ball kid for his own bad serve, swearing at umpires and spitting in the direction of a fan. So far at Wimbledon, the 27-year-old has been fined $US14,000 in offences.

At every grand slam, this man's fatal flaw intersects perfectly with the plot; that being the matches that push him to his limits. Every time he steps out onto the court, suspense hangs in the air. Will he crack? Or will he triumph?

Australians have turned the pages, chapter after chapter, begging this character to deliver us a redemption arc. We've plotted it out. We've pointed to Lleyton Hewitt. With some maturity, some humility and a little more self-awareness, Australians imagine, this man could be a champion.

But it is an arc he refuses to follow.

We keep watching though. One theme of Kyrgios' story has been racism and the "grateful immigrant" trope (that is, that Kyrgios owes 'us' anything) which explains something about his relationship with Australia although not all of it. We've also looked more closely at the creation of sporting 'heroes', chosen as kids and given sponsorship deals before they've even won anything. He is, for better or worse, a rule-breaker, who is changing our understanding of tennis. He is a showman before he is a gentleman. He sees tennis as entertainment, a springboard for celebrity. What we've seen is Kyrgios bring in new spectators and perhaps 'sell' tennis to a new generation.

At least, that was his story before this week. 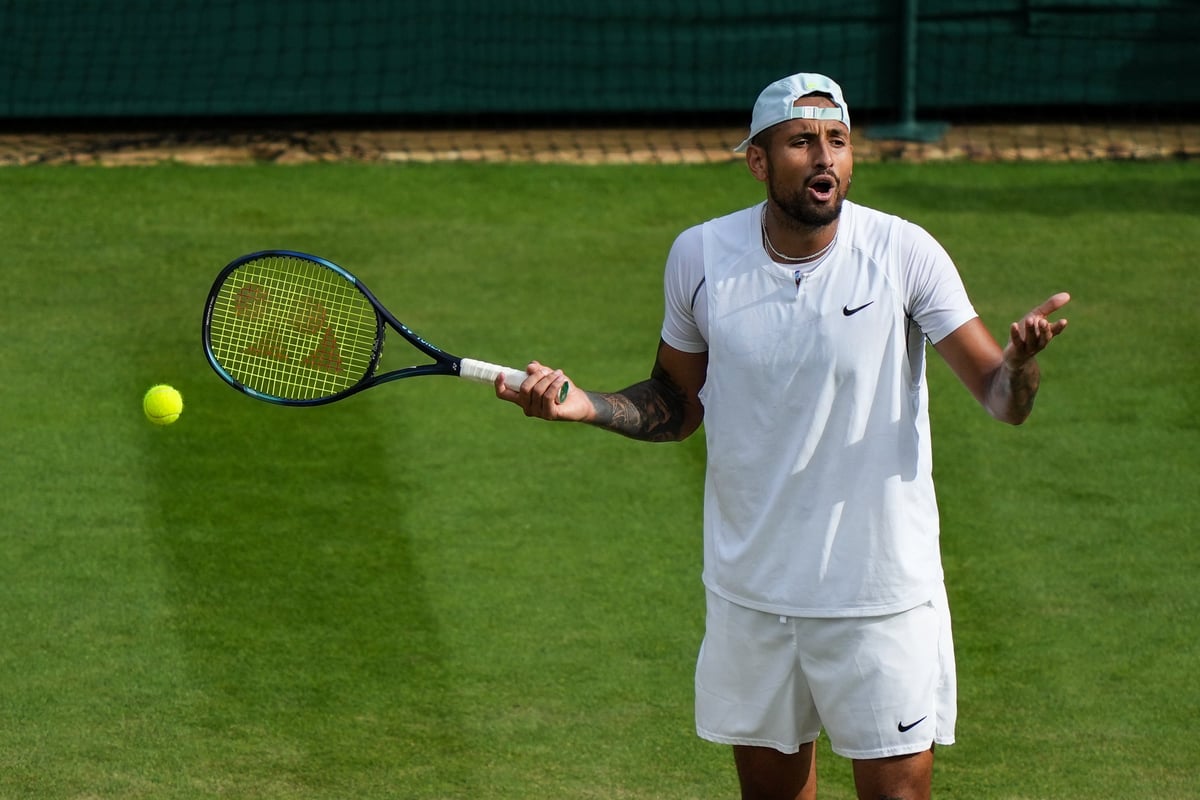 On Monday, Kyrgios said in a press conference, "any publicity is good publicity."

On Tuesday came the assault allegation.

His former girlfriend accused Kyrgios of common assault in December 2021, and this week it was announced he will be facing the ACT Magistrates Court on the 2nd of August.

We could overlook the wrong colour shoes. There's been "disrespectful" serves and not even a week ago his opponent referred to him as "evil". None of that is ideal but it also isn't criminal.

For some, it might change the way they watch him play tennis. A temper tantrum looks more sinister when a man is awaiting trial for assault.

The story, however, does not stop there.

Man, riddled with fines and now facing an assault allegation, was due to face Rafael Nadal - his perfect antithesis - in the Wimbledon semi-final. Most Australians likely expected he would lose - maybe they even hoped he would - and his story would be over for now.

That conclusion wouldn't raise the story to its highest stakes, though. It needed another beat.

For the first time in 91 years, a male player pulled out of Wimbledon before a semifinal or final. Nadal suffered a torn abdominal muscle one day before he was due to play Kyrgios, meaning Kyrgios just walked through to the Wimbledon final.

The protagonist, fiction tells us, must grapple with themselves. Their fatal flaw intersects with the plot, forcing them to make the ultimate choice.

But what if Kyrgios isn't the protagonist in this story?

What if instead it's Australia?

Our fatal flaw is the desire for a champion. A win at all costs attitude.

If a man is scoring points, kicking goals, hitting shots or scoring tries, we are willing to forgive him of just about anything. Say, ball-tampering. Infidelity. Assault. In some cases, rape. The list goes on.

This Sunday, Australia must look in the mirror.

Do we cheer for Nick Kyrgios?

H
hopey a month ago

Reply
Upvote
Nick Kyrgios is Nick Kyrgios. He's never going to be cool and calm like Federer (even though he was a hot head as well when he started) or robotic like Nadal. He's always going to play things his way. If you don't like it, or him, don't watch. Thankfully, he finally seems to have come to terms with who he is and made peace with that instead of beating himself up (or self-harming) because he doesn't play a full tennis schedule or train in the same manner as others. I'll be supporting him and I hope he wins. As for the court issue - there's always two sides to every story, and from what I've seen and read from his ex, she's quite vindictive herself. innocent until proven guilty. Hopefully the court reveals the truth.
C
cat a month ago

Reply
Upvote
@hopey Some good old fashioned victim blaming, hey. Heaven forbid we believe the victim not a famous sportsperson.,
B
beezzzy1 a month ago