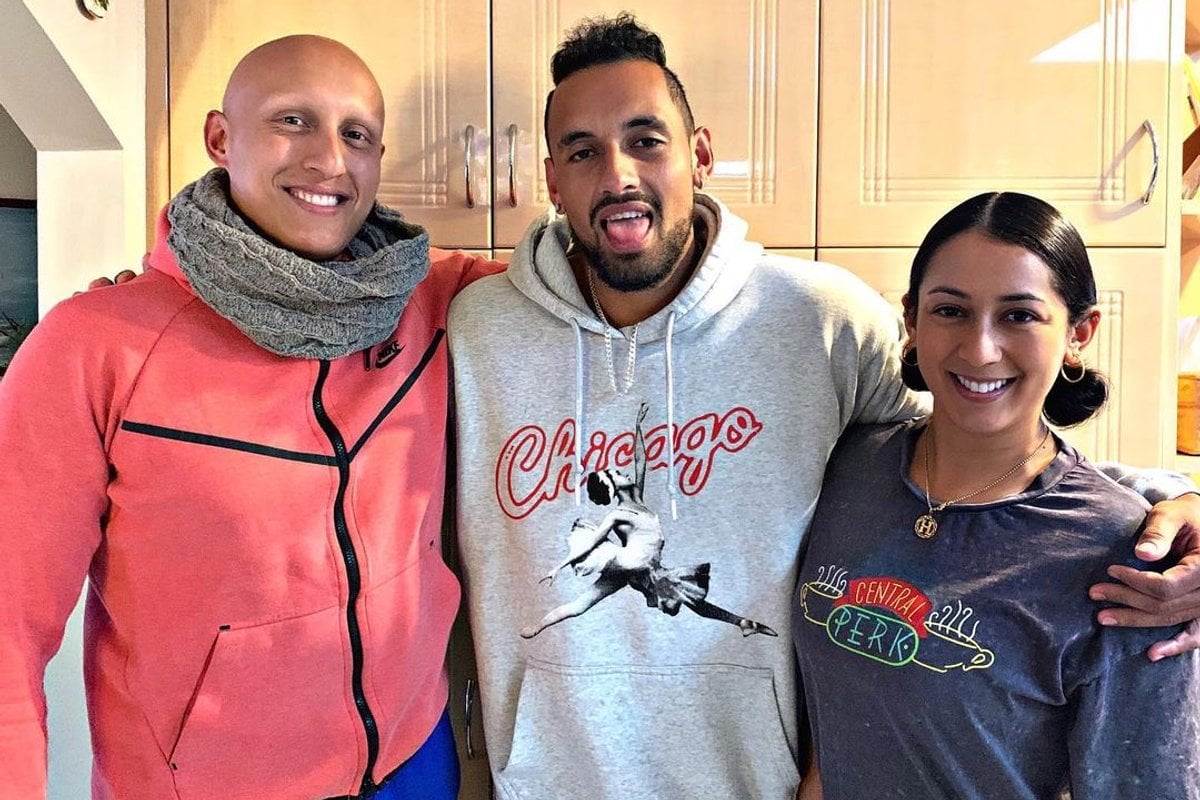 It's time for another Kyrgios to appear on our TV screens.

Halimah Kyrgios, the older sister of tennis pro Nick Kyrgios, is competing on this year's season of The Voice Australia. And this Sunday night, she'll make her first appearance, performing in the blind auditions.

Halimah's brother Nick and parents Norlaila and Giorgos also attended (via video call) to support her.

After her performance, host Sonia Kruger said: "She was amazing!" while her proud brother replied: "She always is."

Watch the teaser trailer for The Voice Australia 2021. Post continues after video.

Ahead of the episode tomorrow night, here's everything you need to know about Halimah and the Kyrgios family.

Halimah is the middle child in the Kyrgios family. She and her brothers, Christos and Nick, were born and raised in Canberra to Giorgos and Norlaila.

Their dad was born in Greece and moved to Australia as a child. He works as a house painter. While their mother, Norlaila, is a computer engineer with royal blood.

Born in Gombak, a district in Selangor, Malaysia, Norlaila's grandfather’s cousin was the Sultan of Pahang. This makes her, by birth, the Tengku of Pahang, which loosely translates to the princess of the Pahang state.

However, after moving to Australia in her 20s, Norlaila chose to give up her title.

After Nick Kyrgios won his match at the Murray River Open back in February, he opened up about his mother being ill.

"It’s not about me," Nick Kyrgios told reporters, referring to the controversy over tennis players needing to quarantine prior to competing in the Australian Open.

"My mum is incredibly sick. There’s too much risk in all of this. I don’t understand what’s so hard for tennis players to understand," he continued.

"Like, you’re just a tennis player. Do you know what I mean? It’s not life and death like this is."

Before auditioning for The Voice, Halimah spent the past few years performing in musical theatre overseas.

Most recently, she starred in the Andrew Lloyd Webber musical, Starlight Express, in Germany, until the pandemic placed an indefinite hold on her career. After returning to Australia, she came across the opportunity to audition for The Voice and went for it.

Speaking to The Canberra Times, the 31-year-old explained that despite performing countless times before, the blind auditions were nothing like she'd experienced.

"It's a very different setting as to if you're just going to perform something we've rehearsed for hours, weeks, months, and you know what to expect when you go out there," she told the publication.

"Whereas for the blind auditions, you're sitting in the room with 200-plus people and you're just feeding off everyone's nervous energy. I was just going over in my head, the same things over and over again."

Both of her brothers are her biggest fans.

While Nick watched her performance via video call, Christos attended the audition in person.

Eldest brother Christos is a coach and a trainer who has worked in the fitness industry for over a decade. His partner, Alicia Gowans, works in the industry as well as a certified trainer and WBFF Pro.

And tennis pro Nick has been competing overseas all year; most recently, playing in the Canadian Open. Which, unfortunately, made it impossible to watch his big sister perform in person.

"Nick used to sit up in my room and video himself lip-syncing to whatever song I was practicing," Halimah told Women's Day.

"To this day, Nick really does his best to see me perform."

The Voice continues on Sunday at 7pm on Channel Seven.