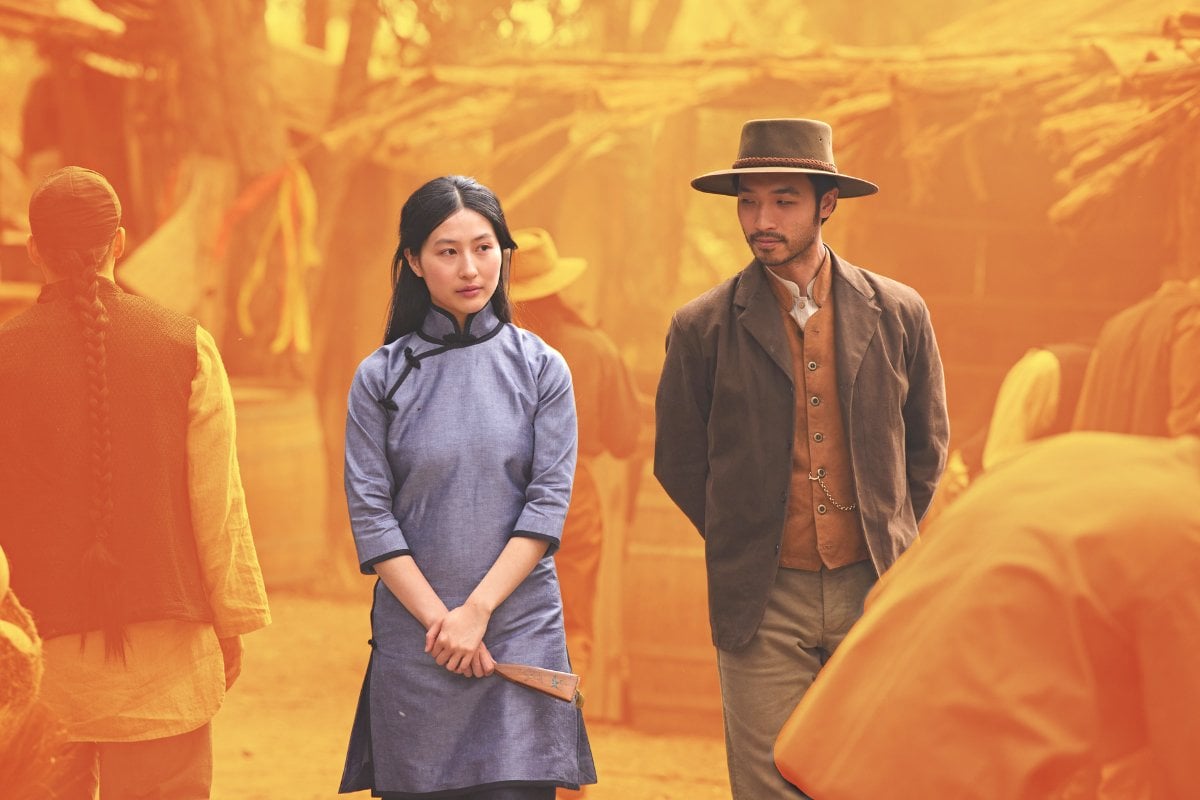 Australia's gold rush has been mined (sorry, not sorry) for content plenty of times before, but those stories have never looked like this.

Set in Ballarat, the story follows the murder of a white woman, whose body is discovered near a Chinese mining camp.

What follows is a murder mystery shrouded in prejudice.

Below I unpack what New Gold Mountain is about and whether you should watch it:

What is New Gold Mountain about?

New Gold Mountain explores 1850s from the perspective of Chinese miners, who were instrumental but mostly thankless in the success of the Australian gold rush.

The story centres around Leung Wei Shing (Mulan's Yoson An), the leader of the Chinese operation who is trying to remain in control of the camp, establish a fairer tax deal for his people and uh, skim a little extra $$$ off the top for himself and his brother.

He must try and prove his value - and hide his deceit - when Zhang Lei (Mabel Li), the ambitious, scathing daughter of a powerful Chinese leader comes to town.

So, things are already pretty complicated for him when a white woman is found murdered. 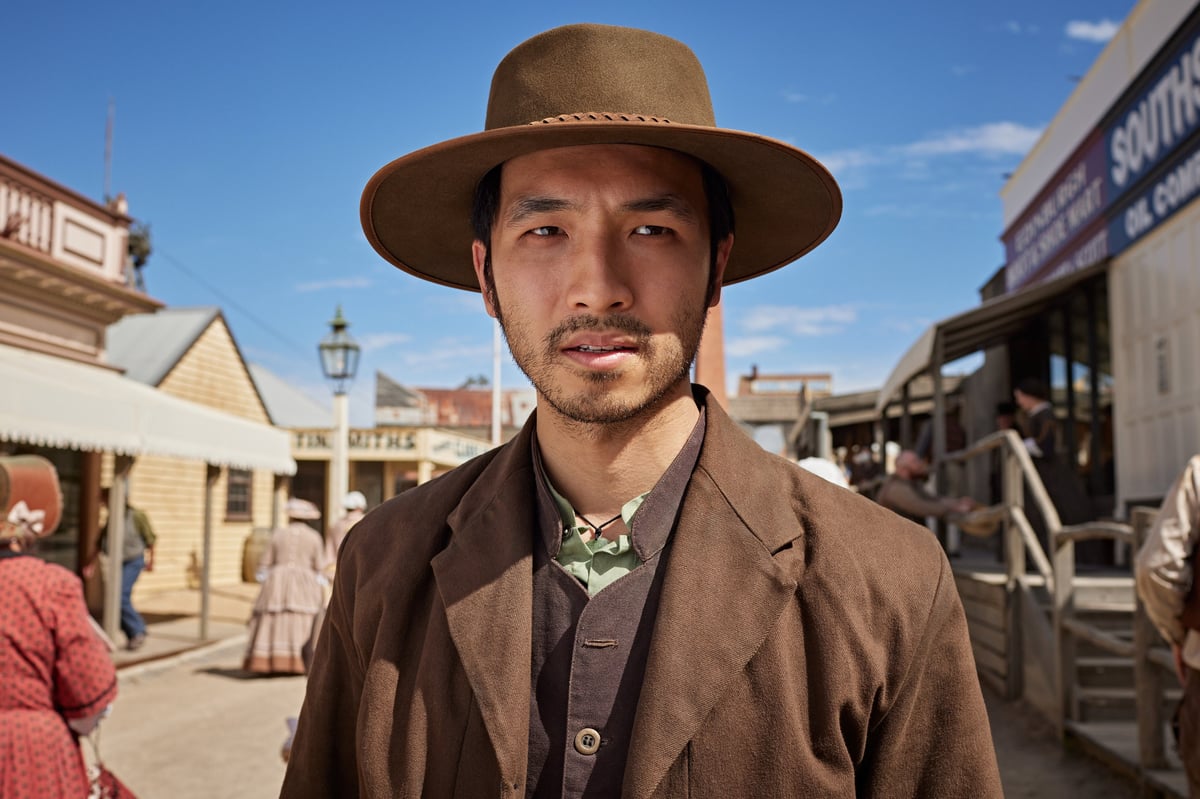 The evidence seems to show Chinese involvement, but Shing is determined to stop white authorities from pointing the finger at his men, concerned about the racial violence that could follow, while Indigenous worker Hattie (Dark Place's Leonie Whyman) is equally concerned her mob could face the consequences.

The murder is a springboard in which to explore all sorts of prejudice: there's the racial tensions, not only between the British and Irish miners and their Chinese counterparts, but also involving the Chinese and Indigenous characters too, as well as tribalism, classism and sexism.

Mabel Li plays Lei, who holds a rare powerful role for a woman in the mine fields and grapples with this being taken away from her in favour of more a traditional gender role.

Speaking to Mamamia, Li explained her character as the "opposing force to Shing".

"She has autonomy. She has power, but I think she's fought a lot to have that position, and that freedom has been granted by a father," Li said.

At its heart, the main characters of New Gold Mountain are fighting to belong in a society where the ruling class don't think they do.

Surprising murder mystery, as well as the long overdue storytelling and representation of this part in Australia's history.

Li told Mamamia playing such a complicated character was the thing that really gripped her to the story.

"She's an antagonist, and she's sort of the opposing force to Shing. There's just something very fun and special to play an antagonist because you get to do these extreme things that are grey, morally, that maybe the protagonist doesn't get to do.

"She's an outsider. She's obviously flawed, and she's extreme, and she's ruthless. But she's also very intelligent, and she's playful. And I think she's spontaneous, and political. And I think she knows how to use the male gaze to her advantage... I think at the core of everything, she's trying to preserve a freedom." 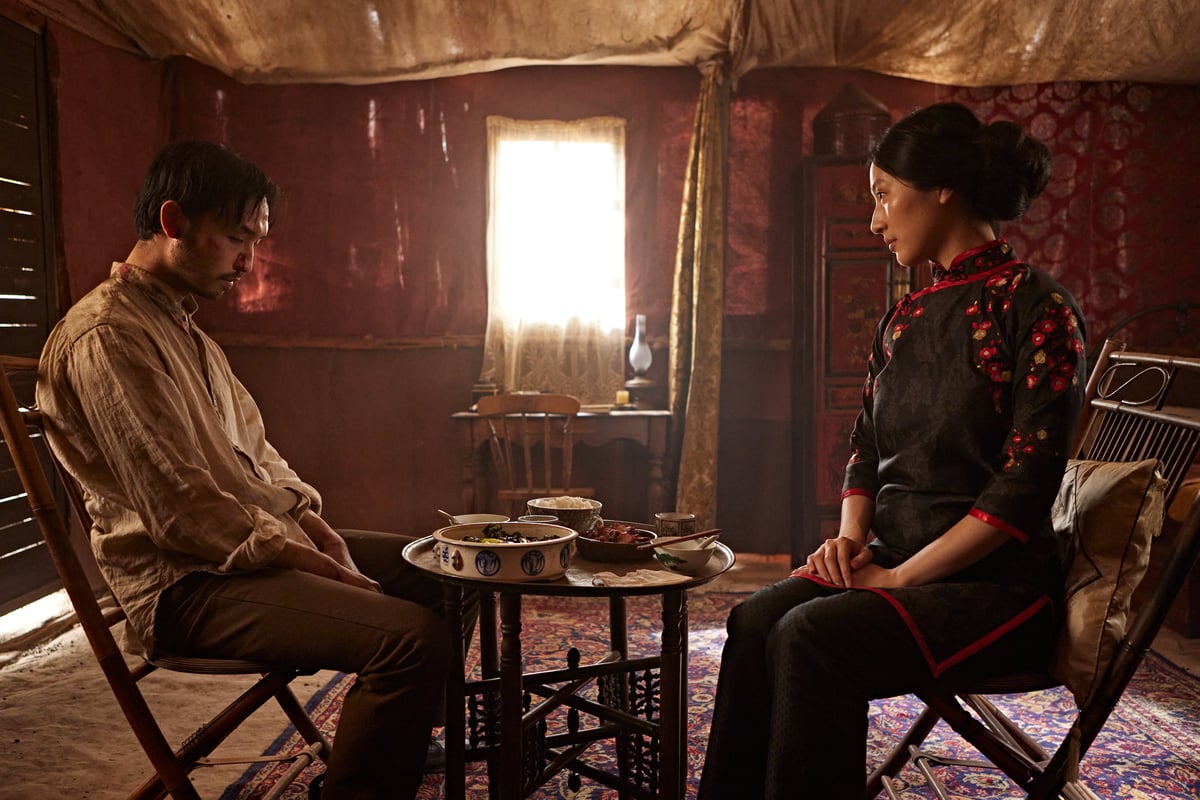 Another of the show's highlights is its use of language.

More than 65 have speaking parts, in multiple languages. Many, including Li and Shing, will switch between them depending on what they're saying and who they're talking to.

After an episode or two, you start to realise the politics and power surrounding the use of Cantonese and English, especially.

Li explained that this was a conscious choice which she discussed with director Corrie Chen.

"[Her character Lei] is a woman. She uses English to sort of subtly, maybe not subtly, one-up them.

"They probably think that she would have never been educated, in especially English. So using those switches as power plays was really important for us in the scene, and justifying those switches."

While watching, this decision added an extra layer of complexity and meaning that is rare on Australian TV.

New Gold Mountain is pretty unique, but there are elements of American western Deadwood in its gritty, messy display of the gold rush period.

There are four one-hour episodes, which will air across two weeks on Wednesday and Thursday on SBS and SBS On Demand.

It's a resounding yes from me.

There are twists and turns throughout the story that will keep you guessing what happened right up until the very last moment, ending up as a deeply satisfying watch.

The series also covers a time in Australia's history from a new perspective. The white men are supporting and background features, with the story lead by the Chinese, Indigenous and female characters. 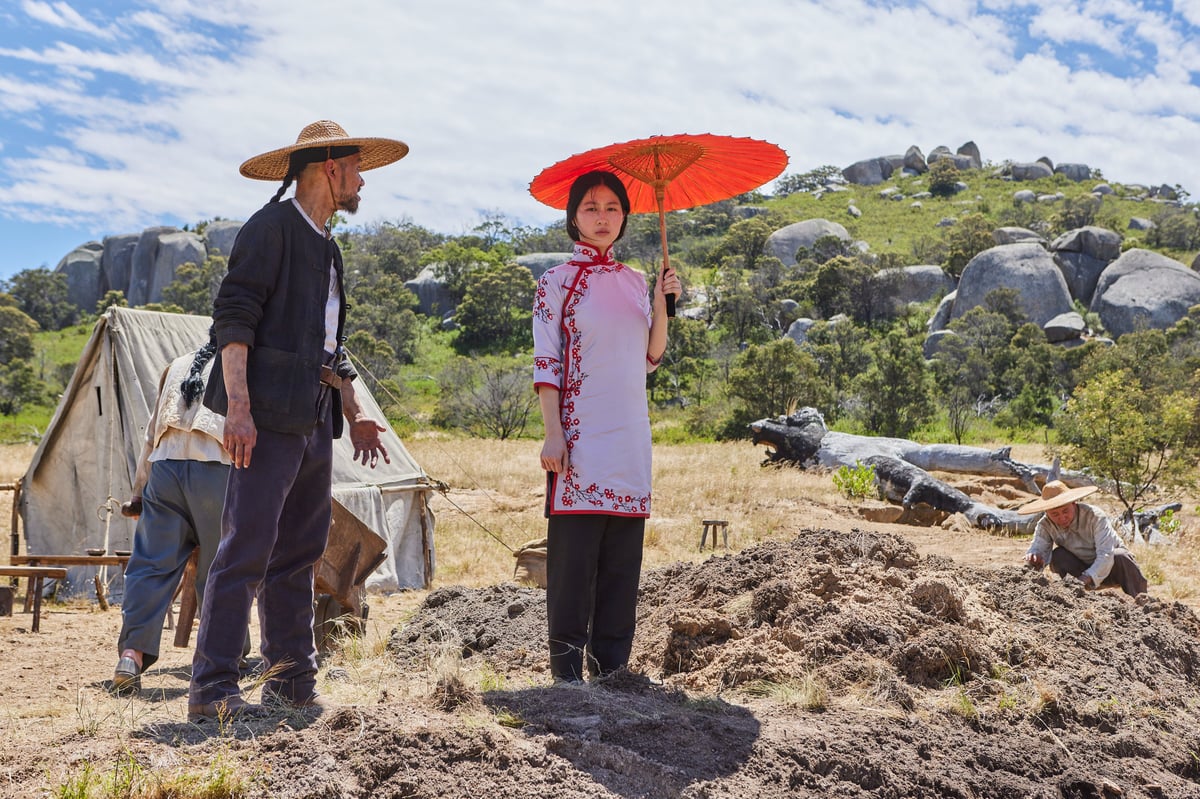 And it does so in a really compelling way, with all the messiness and complications of race relations and gender in the 1800s.

"When I first read this script, I was really drawn to the fact that it didn't shy away from the messiness, the intersectionalities, and the complexities of the racism and violence endemic to the time," Li told Mamamia.

"And I think I haven't really seen a show that deals with a gold rush or that period of time in this way. With this perspective... It's important to reconsider the way Australian history has been told in the mainstream, you know, given we are on stolen land, and the state-sanctioned violence, inflicted upon First Nations people in this country. I think it's when we can start reinstating and confronting our history, that that's when we can move forward together."

"I think it's the first time I've seen this Chinese Australian history depicted on our screens, which is very special," Li explained. 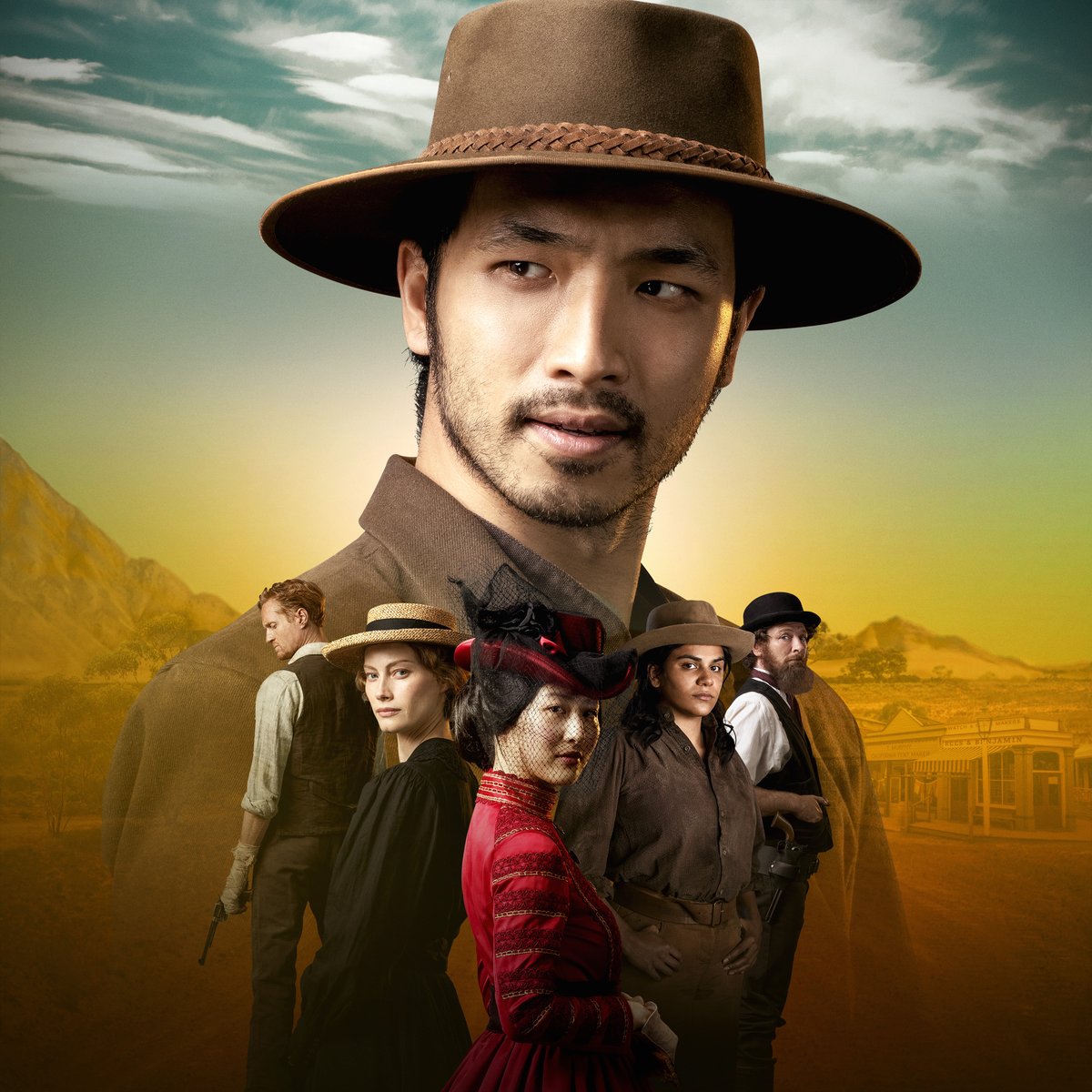 "Even seeing Yoson at the head of the poster image was really emotional in a way, for the girl in me who grew up not thinking that it was possible to see this a show like this being made in Australia.

New Gold Mountain begins airing on SBS and SBS on Demand on October 13 at 9.30pm.