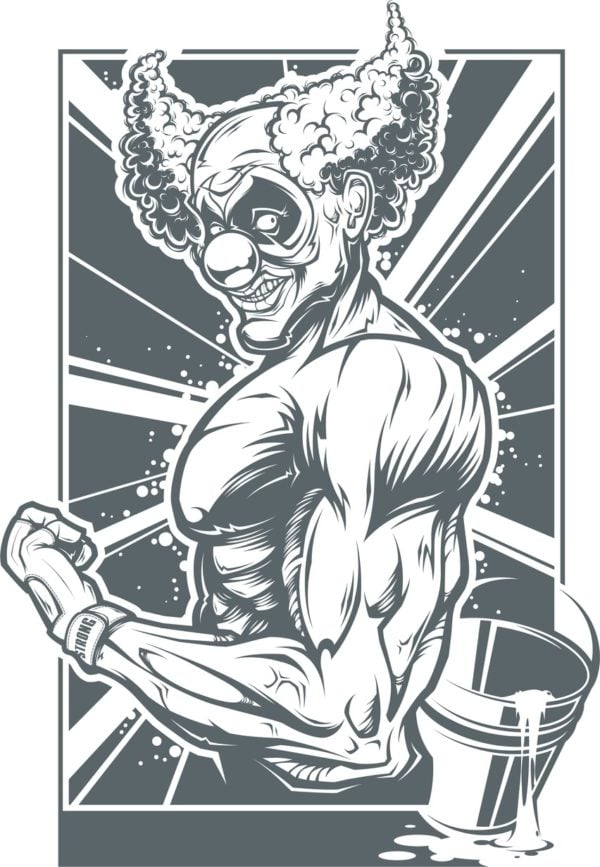 At first I thought it was a ridiculous, the idea of children as young as four doing CrossFit classes designed specifically for them.

And just in case you’ve completely missed it, CrossFit is the latest exercise craze that has crossed the line into religion, with CrossFit devotees forgetting to leave it at the door and embracing it as a way of life.

Holly Wainwright and Jackie Lunn talk about kids and CrossFit on podcast This Glorious Mess.

Mid-conversation they’ll drop and give you 20 and choose to push their cars to the local petrol station instead of drive them, just to work on their core and increase their muscle mass.

The CrossFit mascot is a menacing looking clown with muscles. The first time my daughter and I walked past our local CrossFit centre and she saw the CrossFit clown painted on the brickwork outside she said, “Mum, why is there a scary clown on the wall?”

CrossFit was developed by Greg Glassman.

He wanted to develop a "meaningful, measurable way" to exercise to improve fitness and health by focusing on functional movements like weightlifting, running and rowing. The regimen is meant to push you to your absolute limit, a bit like old episodes of The Biggest Loser which left some contestants struggling to speak, breathe and hold their lunch down.

The appeal seems to lie in the fact sessions are much shorter than most exercise classes and focuses on high-intensity movements so you can feel yourself improving quickly.

That's if you ever return after your first class when the mere lifting of your arm to brush your hair leaves you in tears.

Now CrossFit is targeting children as young as four with programs designed specifically for them. Instead of riding their bikes and climbing trees kids can lift weights and toss tires.

Yes, I too initially thought it was a bit ridiculous for kids to be doing CrossFit, that is until Mamamia editor Jackie Lunn said something so appealing during podcast This Glorious Mess that

I found myself Googling the details of my local CrossFit centre, to see if they cater for kids aged from seven to 12 (which just so happens to be the age range of my children).

She said, "I'm not a medical expert and as long as it's safe I think that's okay by me. I think you need to consider a couple of things. I think activity is really important for kids, and I know my kids being older, particularly with the older girls, if they're physically active they sleep better and so much of teenage life revolves around getting a good night's sleep."

And what I heard was CrossFit will help your children not only get to sleep but stay asleep and then maybe if they've had a good night's sleep they won't wake up in such stinky moods every morning. Then if their sleep improves then so will mine and I won't be in such a stinky mood every morning.

All this time I thought CrossFit was just a fad that attracted people who liked to punish themselves under the guise of exercising for good health and it turns out I'm the crazy one.

If your kids don't like group sports, are sick of martial arts and don't go on the trampoline anymore, why not sign them up to try CrossFit. I know at least one of my kids would love it, Philip, 12, who is always trying to test how fast and strong he is.

And as Jackie Lunn also said during the episode, who cares what sort of exercise your children do as long as they are active. "I think activity's important. If your kids not into group sports and if this is the only way you can do it, well, sign them up," she said.

It is a bit expensive. It's $150-$250 per term for kids but that's the same cost as most children's activities like art class and martial arts.

Holly Wainwright, host of This Glorious Mess, feels that scheduling exercise sessions for children is a bit of a grown up concept. Don't children, particularly the teenage girls you see at gyms next to the older women, get their exercise while running around with their friends?

Not really, says Jackie, whose 16-year-old has joined the gym. "There comes a time when kids stop playing."

"Is the messaging about appearance though, rather than health," Holly asked, which Jackie responded, "Depends on who you're talking to."

My daughter Caterina is only seven and I can't imagine her doing CrossFit unless it was a class we could do together. She's played a bit of netball but prefers to sleep in on Saturdays, because she is after all, my daughter and I love love love my sleep ins.

I think that it's inevitable in the modern world that teenage girls are going to be exposed to lots of silly messages about the importance of appearance and if their reaction to that is to join a gym, then that's probably not a bad reaction.

At least they can improve their health at the same time, meet people who choose exercise as a way of changing their bodies and get that good night's sleep that only physical exhaustion can entice so they have clear-enough heads with which to slap away all of the superficial craziness that girls have to deal with these days.

Listen to the full episode of This Glorious Mess through the Mamamia Podcast app.