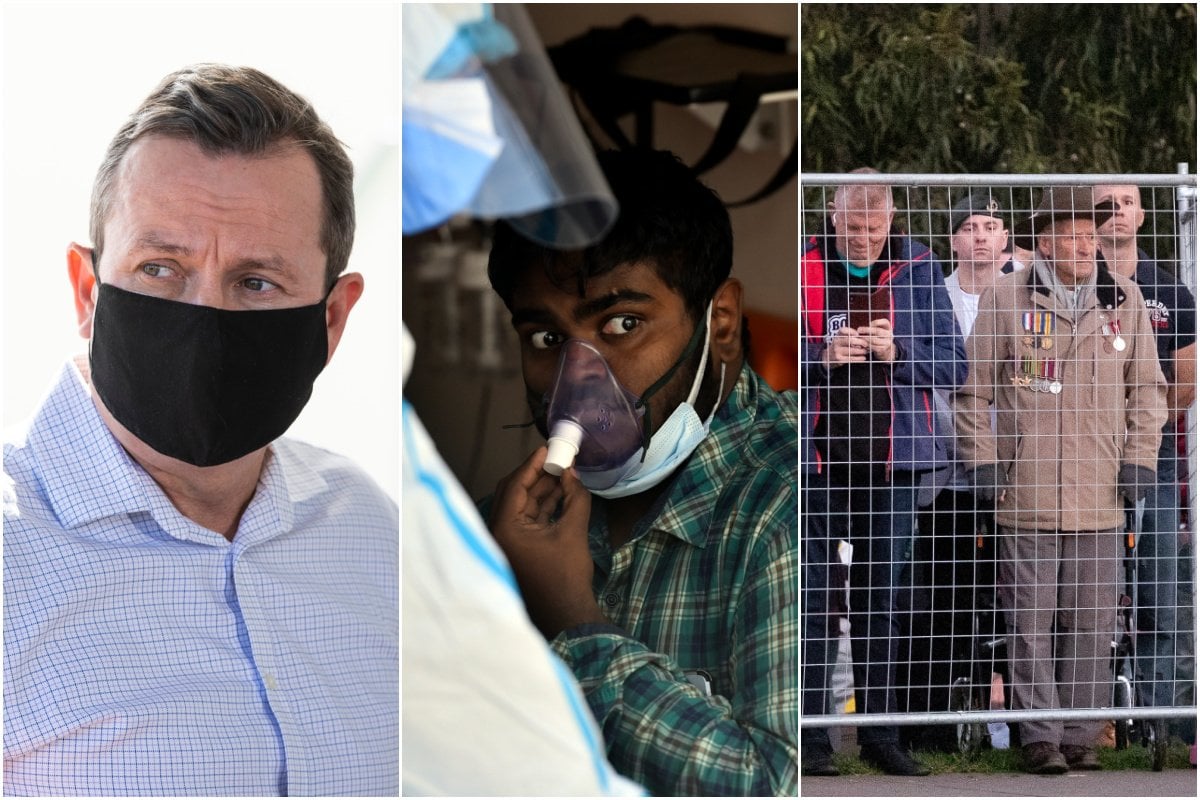 Perth will be subject to extended COVID-19 restrictions past an initial lockdown period of three days, Premier Mark McGowan says.

The West Australian capital and neighbouring Peel region were due to emerge from three days of lockdown at midnight Monday, but Mr McGowan has tempered expectations, and is due to provide an update through the day.

"I'm sure there will be some further measures that continue," he told reporters on Sunday.

"What they are, we won't know until tomorrow morning. We'll get health advice ... and I think people should get used to the prospect that there will be some further measures continued beyond Monday."

The COVID case in Perth is a man who returned from India after being given an exemption to travel there for a wedding.

Other Australians believe that the exemption system is nothing more than a lottery. @eddy_meyer #9News pic.twitter.com/T7rJOjpYlQ

The premier expected more than Saturday's 12,000 COVID tests to be completed on Sunday, which would help health officials determine the path forward. The lockdown was sparked by two 'local' transmission cases which have been traced back to a Perth Mercure Hotel used for quarantine. There were no new cases of community transmission detected on Sunday.

Patient zero was revealed over the weekend to be a man who returned from India after being given an exemption to travel there for a wedding.

WA Premier Mark McGowan has been scathing of the process that allowed that particular travel exemption, and of the government's refusal to provide alternative facilities for quarantine such as defence bases and the Christmas Island detention centre

Defence Minister Peter Dutton told ABC Insiders over the weekend such facilities are "not fit for purpose".

Peter Dutton says Christmas Island is not “fit for purpose” for returned travellers rather than hotel quarantine, and accommodations would not be able to be made. Same Peter Dutton who has spent millions detaining a family of four on Christmas Island. #insiders

"Mark McGowan has made a mistake," he said, about the WA government's use of a Perth Mercure Hotel where the virus spread among quarantining guests.

"Nobody is being critical of him for that. He doesn't need to be defensive. He doesn't want to be the next Dan Andrews where they had significant problems," he added, referring to Victoria's long lockdown last year.

But Mr McGowan said it was the Commonwealth's responsibility under section 51 of the Constitution, also reminding reporters that Christmas Island was used in March and April last year for people returning from Japan and China.

A British-flagged tanker ship with COVID-positive crew is making its way towards Australia and has been given permission to anchor off Brisbane.

The Inge Kosan is scheduled to arrive about 10am on Tuesday, an official from Brisbane's Vessel Traffic Services, which is responsible for maritime safety, told AAP on Sunday.

It is understood arrangements were being made for the tanker to be boarded by Australian health and other officials, a maritime official said.

It is expected that they will all be wearing full protective safety gear.

"Throughout the course of the pandemic, Queensland has met its maritime obligations and supported seafarers," a Queensland Health spokesperson told AAP in response to questions about the Inge Kosan coming back to Australia.

It is Queensland government policy to lend support to any vessel arriving in its waters that require medical assistance.

UK, US to send aid to virus-hit India.

Britain and the United States will send medical gear and other aid to India to help the country as it battles a devastating COVID-19 crisis.

The UK is sending more than 600 medical devices including oxygen concentrators and ventilators.

The equipment comes from Britain's surplus stock and the first shipment was due to arrive in New Delhi early on Tuesday, the British foreign ministry says.

What you need to know about the catastrophic coronavirus wave overwhelming India's hospitals. https://t.co/FceJWBN9lU

The US later announced it will immediately provide raw materials for COVID-19 vaccines, medical equipment and protective gear to help India.

Washington was under mounting pressure to help India, the world's largest democracy, after Britain, France and Germany pledged aid over the weekend.

India has seen a massive surge in COVID-19 cases in recent days, with hospitals in the capital and across the country turning away patients after running out of medical oxygen and beds.

India set a global record on Sunday for the highest number of coronavirus infections in a day with 349,691 cases. It was also the fourth straight day of record peaks in India.

Business wants budget to get women in work.

Big business wants Treasurer Josh Frydenberg to make it easier for women to get back into work by fixing both the nation's broken child care and paid parental leave systems in next month's budget.

Business Council of Australia chief executive Jennifer Westacott argues that with Australia's population growing at its lowest rate since World War I, it is critical female participation is lifted to make the most of homegrown talent.

"A women's budget is not just about fixing the cultural problems we've seen writ large across society, it's also an economic imperative," Ms Westacott said in a statement on Monday.

There are fresh calls for the government to boost paid parental leave, ahead of next month’s budget. #9Today pic.twitter.com/ZxsRb2JQ46

She said the Productivity Commission found more than 90,000 people across Australia were not in the workforce last year, mainly because of the high cost of child care.

"Our child care and paid parental leave systems are a barrier to women who want to get back into work and they don't work for modern families," Ms Westacott said.

She said these systems should not discourage people from picking up extra hours or realising their full potential.

"For every dollar we invest in child care, we'll get $2 back," she said.

"KPMG estimates that the cost of our child care plan would be around $2.5 billion but it would deliver a boost to the economy of around $4 to $5 billion."

On paid parental leave, the council is proposing a more flexible system that would encourage both parents to take more equal caring responsibilities and get the ball rolling on cultural change.

The council estimates the cost of transforming the paid parental leave system would be around $1 billion a year.

The treasurer will hand down the budget on May 11.

Mourners to wear green at 4pm vigil for Kelly Wilkinson.

Family, friends and the broader Gold Coast community will gather at 4pm to remember Kelly Wilkinson, the mother-of-three who was allegedly burnt to death by her estranged husband last week.

The event is taking place on the Gold Coast Titans training oval at The Club at Parkwood Village. 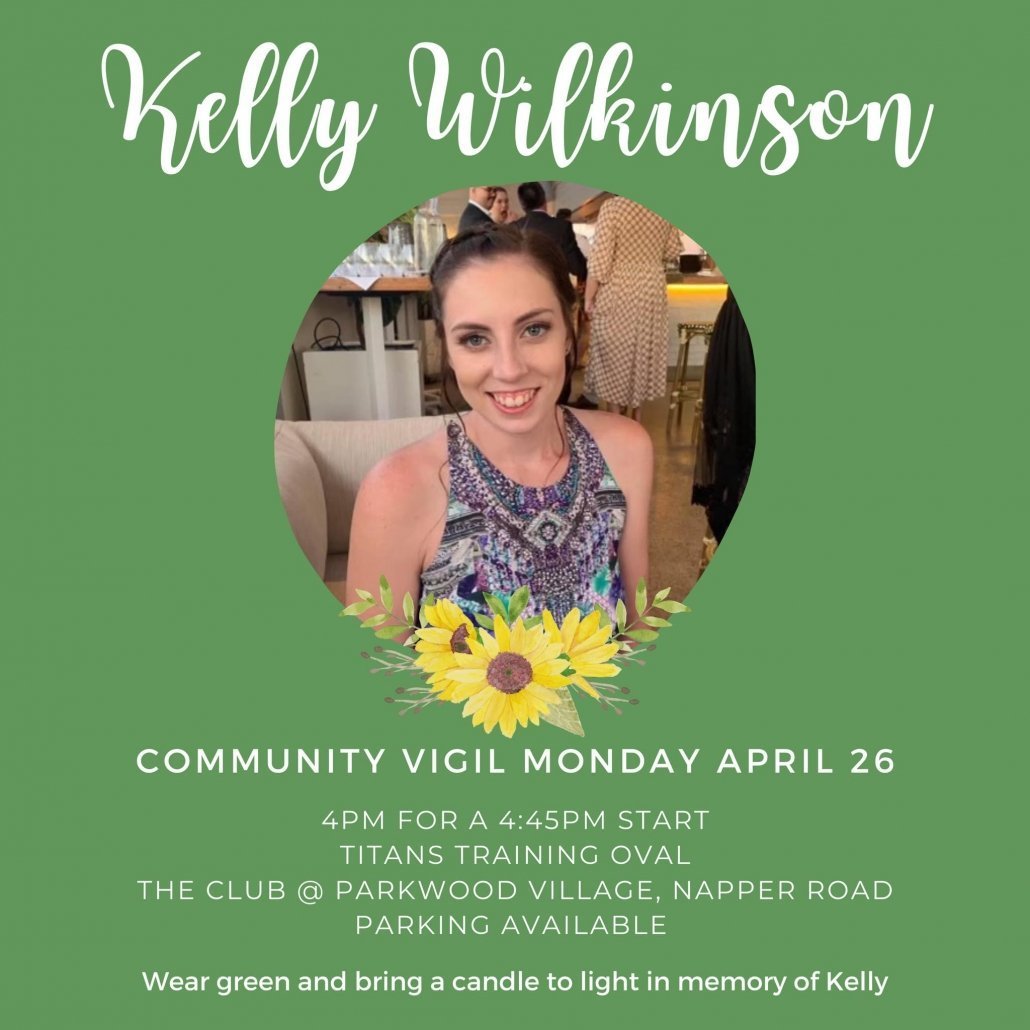 Kelly's family will address the mourners, who have been invited to wear something green - Kelly's favourite colour. They're also being told to bring their own candles which will be lit at sunset.

A temporary fence did little to deter those gathering at Victoria's Shrine of Remembrance for the traditional Anzac Day dawn service.

Several hundred people lined the fence surrounding the Shrine to mark the 106th anniversary of the landings at Gallipoli on Sunday morning.

RSL Victoria chief executive Jamie Twidale conceded there was a small cohort of servicemen and women past and present left displeased with the "contentious" crowd limit. 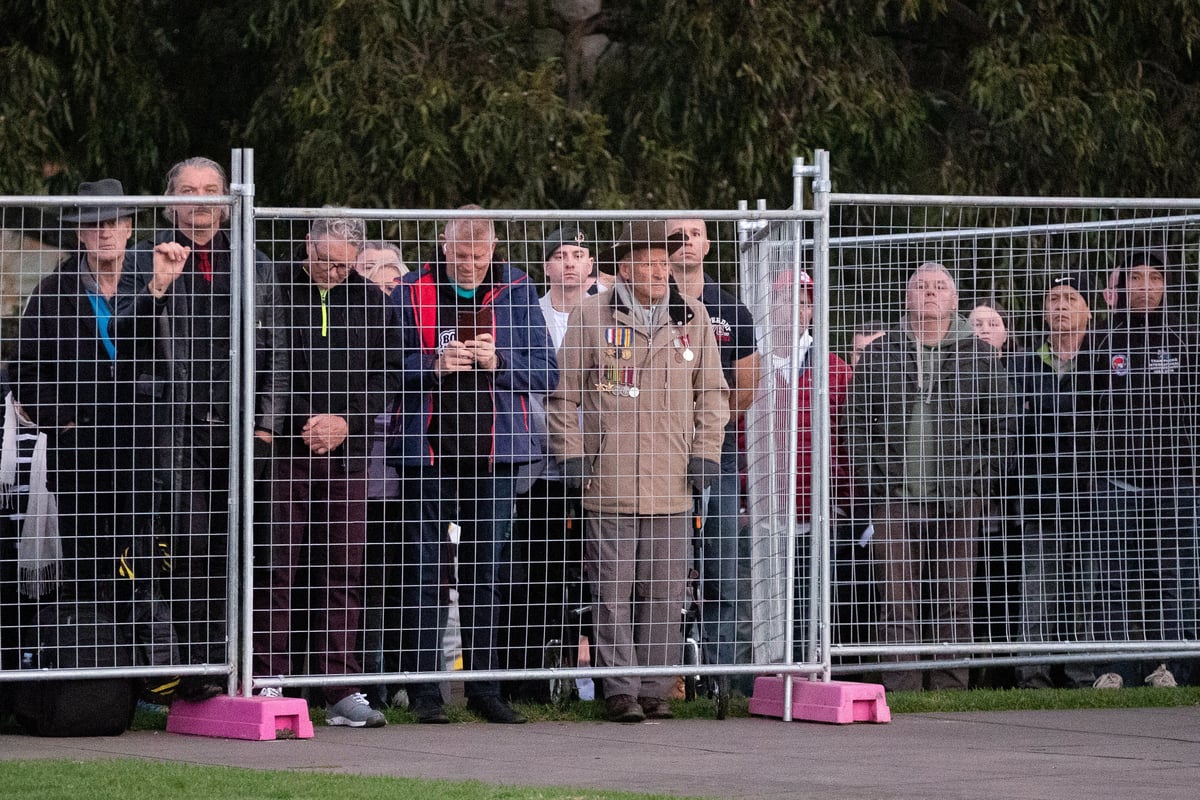 People are seen behind wire fencing outside the Shrine of Remembrance on Anzac day Image: Asanka Ratnayake/Getty

"A few veterans out there are a bit disappointed," the current Army Reserve member told AAP.

Indigenous Australians gathered on the grounds of the Australian War Memorial in Canberra for the first time for an Anzac Day service. While past events have been held at a Ngunnawal country site on the side of nearby Mount Ainslie, about 100 people brought the service to the For our Country sculptural pavilion.

The service heard it was a time to "remember those from our own mob" who had paid the ultimate sacrifice.

The event was held after the Canberra dawn service, but before the national ceremony, and was hosted by members of the Aboriginal and Torres Strait Islander Veterans and Services Association.

Aboriginal and Torres Strait Islander people have served in every Australian defence commitment since Federation. Over 1000 are believed to have fought in World War I.

Anzac Day commemoration crowd limits across the country jarred for many against the backdrop of bumper attendance allowances for traditional AFL and NRL clashes at the MCG and SCG.

A year to the day since a lone bugler played the Last Post inside an empty stadium, the MCG was alive again.

The traditional Anzac Day clash is the biggest AFL home-and-away game of the season and it once more lived up to that billing.

78,113 is the official attendance number from the MCG today. That makes it the biggest crowd to attend a sports match in the world since the pandemic began. @7NewsMelbourne pic.twitter.com/wWyVO5pSN3

After COVID-19 put a line through the 2020 blockbuster, 78,113 fans - a world record since the pandemic began - turned out to watch Collingwood and Essendon face-off.

The crowd comfortably topped the 67,000 that attended a Twenty20 cricket match between India and England in Ahmedabad last month.

Morrison support bounces back in Newspoll.

Support for Prime Minister Scott Morrison has bounced back strongly in April after it dropped in March as rape allegations engulfed Parliament House, a Newspoll survey shows.

Mr Morrison's approval rating rose to 59 per cent in April compared to 55 per cent a month earlier, according to the latest Newspoll published in Monday's edition of The Australian newspaper.

Labor leader Anthony Albanese's performance was approved by 40 per cent of respondents, down from 43 per cent.

Support for the federal Coalition also improved on a primary vote basis, although only marginally from 40 to 41 per cent, the Newspoll shows.

Labor still edges the Coalition on a two-party preferred basis, with 51 per cent support compared to 49 per cent. That's down from 52 per cent for Labor in March surveys.

- World No.1 Ash Barty has celebrated her 25th birthday weekend by winning two titles, and a brand new sports car, at the Porsche Tennis Grand Prix in Stuttgart.

- The 93rd Academy Awards will take place on Sunday night in the US (10am Monday AEST) with no host or audience. Nominees, however, will attend without face masks.