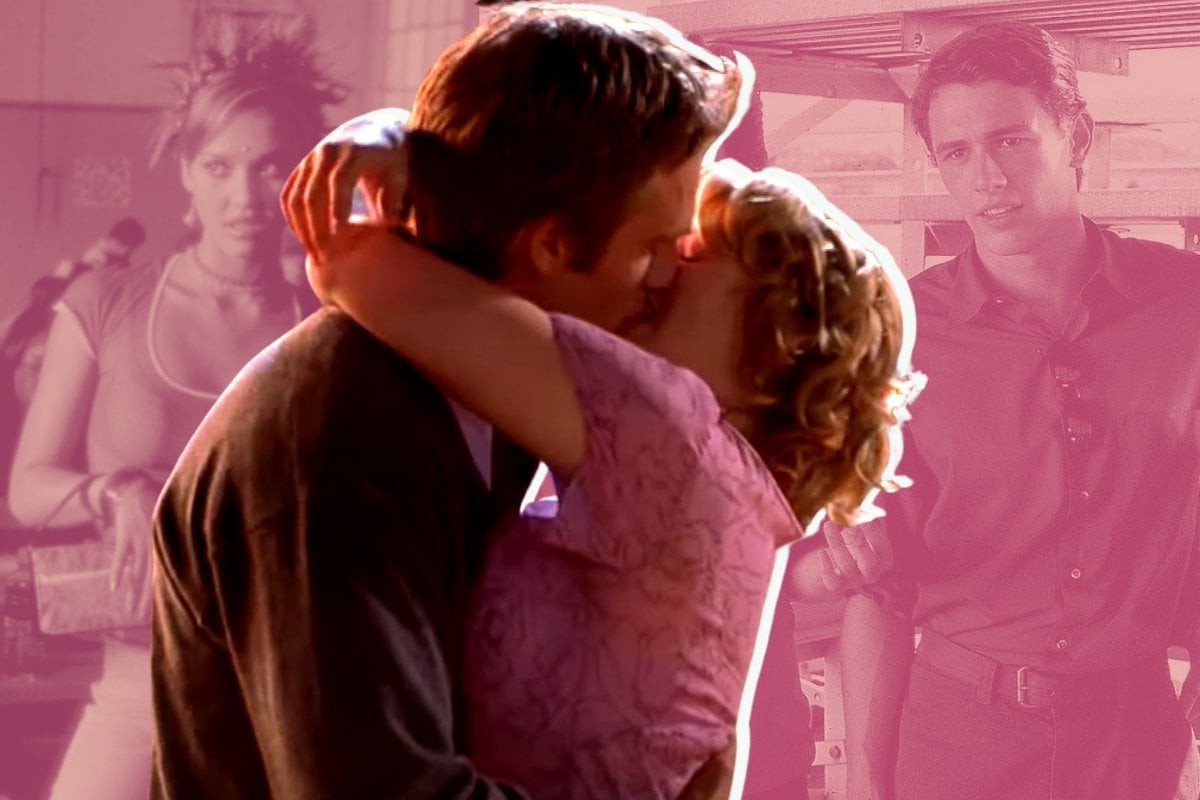 In 1999, Never Been Kissed dropped and joined the iconic repertoire of high school rom-com classics.

Starring Drew Barrymore, the film follows a 25-year-old named Josie Geller who gets assigned a story at her paper, where she goes undercover at a high school to discover what kids are really doing in the 90s.

And, while perhaps a little problematic in hindsight, the 25-year-old falls in love with her teacher: Mr Coulson.

Watch the trailer for Never Been Kissed. Post continues below.

Looking beyond that, it's a feel-good film that will always hold a special place in our heart.

So, we decided to take a look back at six things you probably didn't know about the movie.

1. James Franco made his big film debut in Never Been Kissed.

Yep. Never Been Kissed was James Franco's first "big" role. But you'd easily miss him if you weren't specifically looking for him.

The actor starred as one of the popular kids with a few lines in the film, and went on to star in Freaks and Geeks the same year. 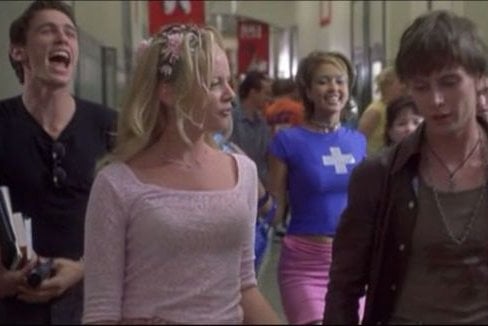 Like Franco, Alba was a supporting character in Never Been Kissed, acting as one of the 'popular clique'. 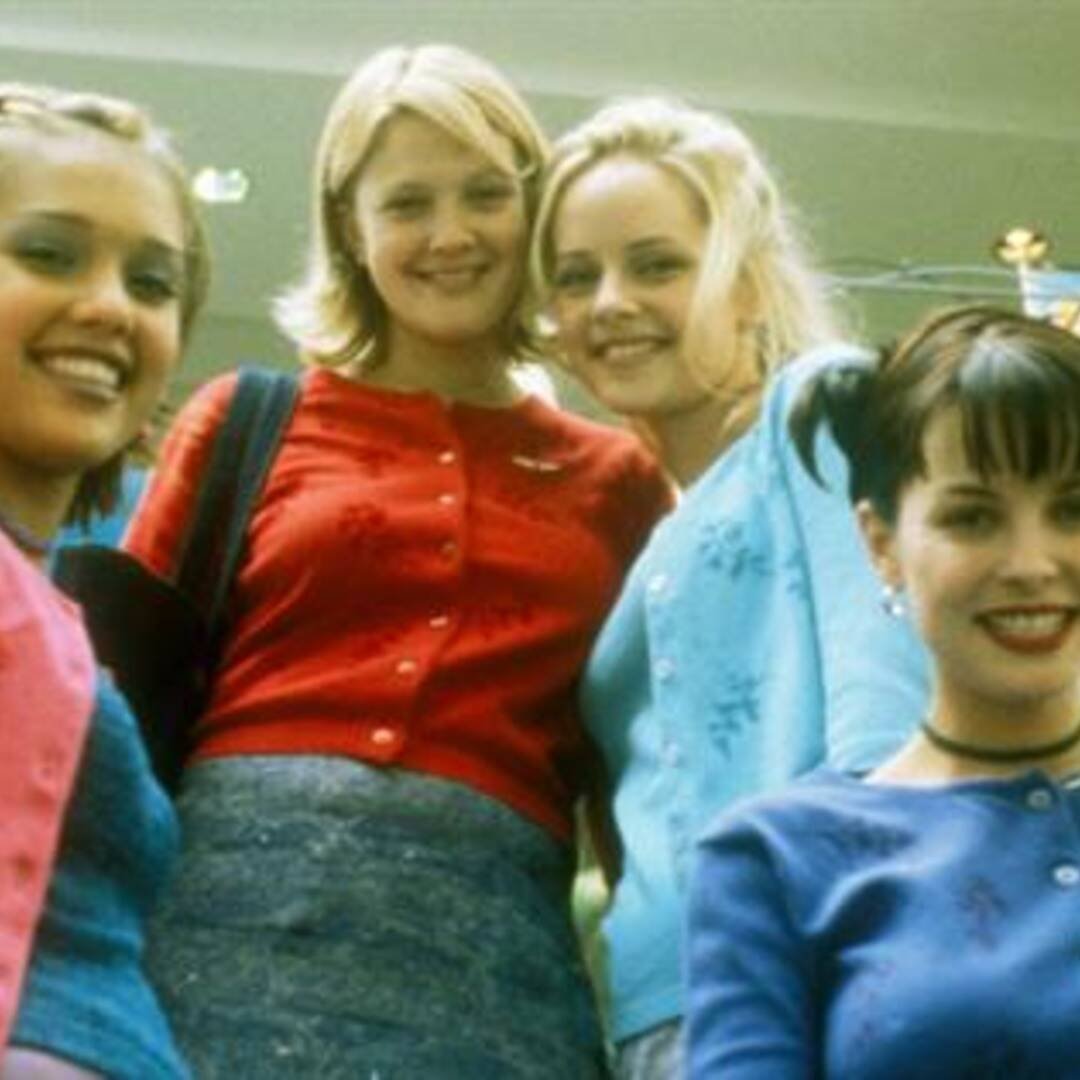 While on set, Alba celebrated her 17th birthday, later reflecting on it with Barrymore on the Drew Barrymore show.

“It felt like camp but you also really took so many people under your wing and guided them," she said of her co-star.

"A lot of us were just starting out, and you set the stage I would say for us and gave us a platform to be successful, so thank you."

3. Michael Vartan found himself in a predicament after the first kiss take.

Appearing as a guest on The Drew Barrymore Show this week, Michael Vartan who starred as Josie's love interest, Mr Coulson, opened up about that infamous kiss scene between the pair.

"There’s a story about the famous scene that very few people know about and I’m not sure I should…," he began, looking hesitantly at Barrymore.

"The feelings… they just happened, and I very quickly realised I was in a very bad spot because I was wearing very loose slacks and I thought, ‘This is going to be a disaster when they cut, I must pre-emptively end this'.

"So what I did, in a panic, I just yelled cut, and bent over and said, ’Oh guys, sorry, I put my back out playing ball'… Anyway, I went off into my corner and I was thinking horrible thoughts like, you know, dead puppies, dead puppies... finally I was able to compose myself, and luckily the subsequent scenes went on without a hitch, but that was, uh… You’re a very good kisser."

"You weren't married at the time, so yeah, I went for it because you were single and I felt I wasn't going to offend anybody," Barrymore said in response.

4. Michael almost missed out on the role

Speaking to E! News in 2017, Michael Vartan explained that directors weren't convinced they wanted him for the role.

"I auditioned for Never Been Kissed 116 years ago and I was as nervous as can be," he said.

"It was my first, one of my first, really big movie auditions and I really had no notion or thought that I was gonna get the job."

But with the help of his co-star and producer, Drew Barrymore, he landed the role.

"She fought very hard for me and I got the job."

5. Drew Barrymore was 'hands on' in Josie's costume design.

According to costume designer, Mona May, Barrymore was very hands on in creating Josie's eccentric fashion sense.

"We went to Loehmanns to try clothes on because she really wanted to find the coolest, weirdest stuff to create this character," May told Interview in 2018.

"She's so strong in her visuals and how she likes things, so it was really us creating it together, which is always really fun.

"At the end we clean her up and you find her soul... She's gone through this crazy journey and she's now who she's supposed to be."

In 2018, directors of both Never Been Kissed and I Feel Pretty, Abby Kohn and Marc Silverstein, referred to the latter film as the 'spiritual successor' of Barrymore's 1999 hit.

The 2018 film I Feel Pretty, starring Amy Schumer, is a romantic comedy that follows main character, Renee who sustains a head injury that makes her feel and act 'undeniably pretty'.

"[I Feel Pretty] and Never Been Kissed are more character comedies with romantic elements. They're not your straight, like, guy meets girl, girl meets guy and they fall apart for a while and then try to get back together, or whatever," Silverstein said to Entertainment Tonight.

"Truthfully... when we started this, we felt like [I Feel Pretty] would be a spiritual successor to that movie in a way."

"Again, it's a lead character comedy that has a broad, high concept to it, but it's treated in a very real way. And it's sort of kind of the same thing! So, we don't try to change what we do that much. You're obviously changing characters and styles, but I don't really feel like our approach to movies is that different than it ever was."