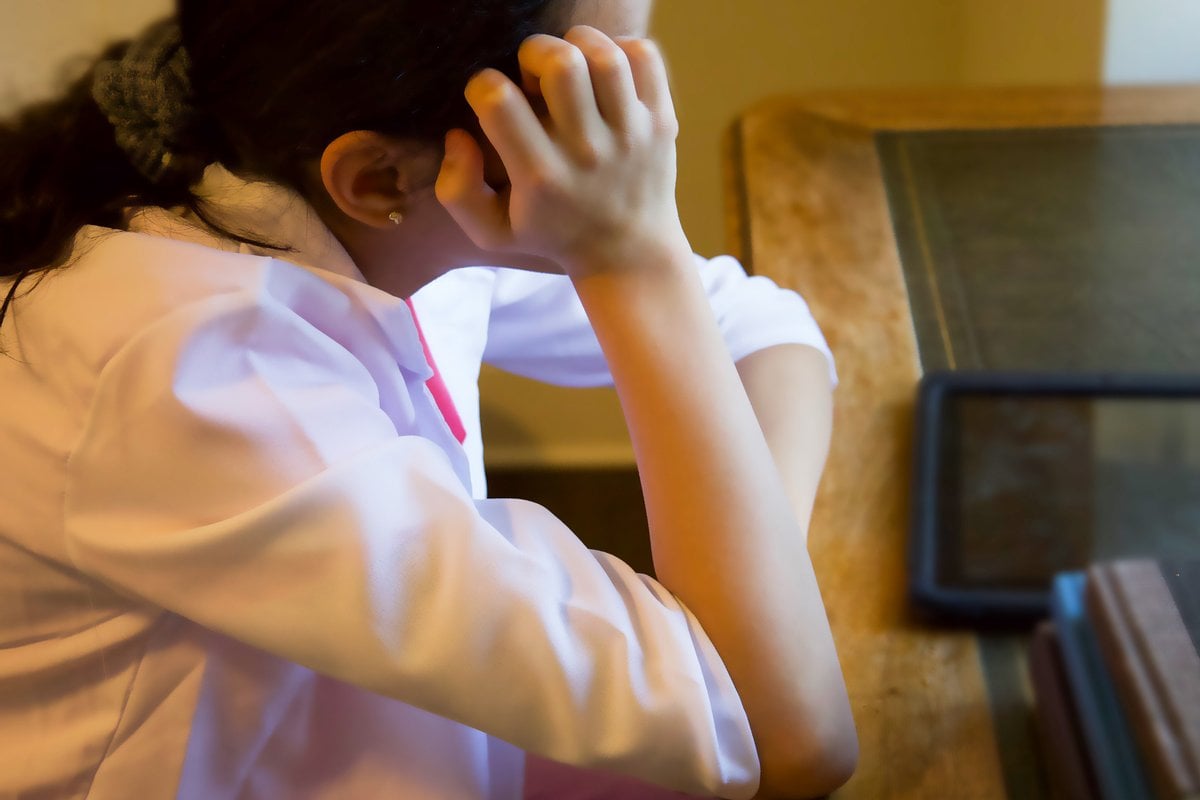 I used to love this time of year as a kid.

There were the Christmas parties where everyone brought a plate of party food, the end-of-year celebrations and most of all; the presentation days and the days we got to bring home the reports.

Watch: The horoscopes home schooling their kids. Post continues below.

At the end of each year I would sit surrounded by my peers, nervously teetering between wanting my name to be called out for an award, and not wanting to have everyone look at me on stage.

My name would be called, and I’d walk to the stage, my heart pounding out of my chest. Red-faced I’d scuttle back to my spot on the wooden floor, and glance at my award, a circular medal with the words, “Most Proficient” engraved across them.

Kid-me had no idea what that meant, and adult-me also just had to Google to double check the definition. Most years I received the ‘most proficient’ award, others were Hardest Working Student or other achievement awards.

I’m not bragging. I had two siblings who earned the same.

The education system is made for people like us; Neurotypical human beings. It celebrates us, and rewards us.

I am the owner of a Neurotypical brain. Like around 70 per cent of the world, I see a task, I understand the steps to complete it, and I get it done.

I am the parent of a beautiful Neuro-divergent child who has been diagnosed with Inattentive ADHD and Anxiety. The education system isn’t made for kids like her.

Presentation days also aren’t made for kids like her, and neither are report cards. In fact the idea of both those things lights a fire inside me.

I’m not the sort of parent who thinks every child deserves a medal. I’m not. I’m all for celebrating individuals. I want the high-achievers to be recognised. I want the proficient kids to be handed that medal with pride. I want the fastest swimmer to be praised.

And I want that kid who improved in leaps and bounds to be handed his award while his parents watch on in the crowd.

I also want report cards to stop counting the days we showed up late to school, as if we were sitting at home eating pop tarts and watching cartoons.

The reality is we were sitting in the offices of Psychologists, and Paediatricians and Occupational Therapists, spending thousands on support for our girl.

I want there to be awards for important life skills like resilience. Because despite the school world being noisy, wild and overwhelming, kids like my daughter showed up most days and did the best they could.

I want to shout out to the world, and hand my daughter all the medals I could hold, because this year was so heartbreakingly hard, made harder by being so different from her peers, but she got up each morning (albeit with much hand-holding and love) and walked into that school, even if it meant sitting alone.

I want there to be awards for being inventive, for building coping mechanisms for figuring out solutions for novels she can’t read, and maths problems that are impossible to understand.

The measuring stick of success for each student isn’t the same. Success looks different for each kid, and especially for many Neuro-divergent children and teens. I realise now as I parent my daughter, that learning was quite a breeze for my own Neurotypical self, because the school system is made for people like me.

I also parent a neurotypical child who, this year, came home with a glowing report and awards aplenty. And when my Neuro-divergent daughter came home the next day with her own report, she handed it over to us with her spirit broken: “It’s not good, is it?”

I over-enthusiastically proved to her that it was indeed good, and that all we cared about was her effort, and that she showed up.

It’s challenging to explain to her that she’s being measured against children who function differently to her, while also wanting to tear that report up into a million little pieces and tell her that it’s absolutely meaningless.

The school system isn’t made to celebrate kids like her, but our home is. We celebrate her resilience, her quirkiness, her kindness and her ability to smile despite the challenges.

And we’ll just patiently wait for the school world to catch up.

Reply
Upvote
Can I tell u also . I too am Aspergers form of autism  . I struggled badly at highschool with bullying anxiety depression. But I kept at it . I.finished year 12 got into university . I was a real need my friends needs we used to study together .  I burned out at uni  so left went to Tafe .  Your daughter can be home schooled and complete a degree online . So many options out there   so sorry meant NERDS   not wearing my glasses
N
nessie 4 months ago

Reply
Upvote
Could u change her school ? My son is in a private school which caters 4 children like this . My son is autistic u had to see him at a science presentation . He stood up in front of 50 parents talking about his invention. Honestly I was shocked. They have done so much work with him it's incredible.
Look for a school with a special education unit like my sons highschool .
News
General
Opinion
True Crime
Politics
Sport
Explainer
Entertainment
Celebrity
Reality TV
Movies
TV
Books
Rogue
Royal
Lifestyle
Beauty
Fashion
Weddings
Home
Wellness
Health
Fitness
Travel
Food
Parents
Before The Bump
Pregnancy
Baby
Kids
Teens
School
Parent Opinion
Work & Money
Money
Finance
Career
Lady Startup
Relationships
Sex
Dating
Separation
Friendship
Family
Real Life
Couples