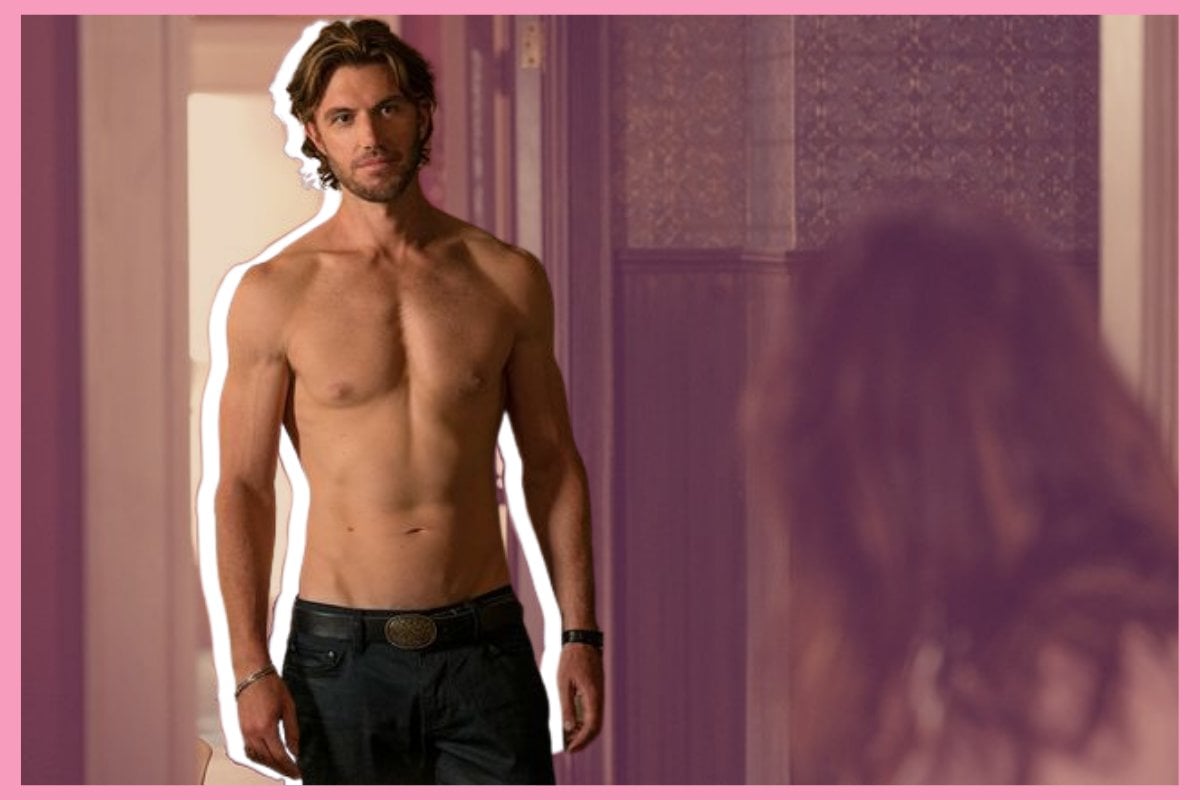 About two weeks ago, a little show called Sex/Life landed on Netflix and threw a partly locked-down Australia into chaos.

Thousands of women were introduced to something rarely seen on television.

No, I'm not talking about full-frontal peen (that too, though).

Sex/Life follows Billie, a new mother-of-two who is married to the wonderful/perfect/kind/boring Cooper.

But you see, she also spends plenty of time fantasising about her ex-boyfriend (aforementioned full-frontal peen owner), Brad.

It got us wondering, where did this concept come from? What is it like filming such graphic sex scenes? And excuse me, what about that cliffhanger?

So, here are five things you may not know about Netflix's Sex/Life.

Sex/Life was based on a true story.

As it happens, the inspiration for Sex/Life came from one self-published author, BB Easton, who recounted her sexual experiences (pre-husband) in her 2016 memoir titled: 44 Chapters About 4 Men.

"[Writing] was the most cathartic experience for me," the author (and former school psychologist!) said to Oprah Daily.

Like the title of her memoir suggests, instead of focusing on one lover like Billie, Easton wrote about four men she slept with including a tattoo artist, a punk rocker out on parole, and a heavy-metal bass player.

Like Cooper, Easton's husband uncovered the journal and, according to Easton, "upped his f**king game".

... Why does this make the show that much more interesting?

What it was really like filming *that* shower scene

To recap, there's a particular scene in episode three of Sex/Life (around the 19.50 mark, fyi) where Billie's husband, Cooper follows Brad into the showers at his exclusive gym.

Brad is showering with his back to the camera and then he turns around... well, it's really something.

And you bet Mark Vogel (starring as Cooper) has had a few things to say about it.

"I think you read it and you film it and you have a laugh about it. And you don't realise the life of its own that it's going to take on. So, yeah, we've had a lot of fun with it, and others are as well. So, there you go," Vogel told E! News.

Vogel added that it "wasn't sexy", and okay, Mark. Speak for yourself.

"I think in the best way possible, the way that these sort of things are set up nowadays, especially with an intimacy coordinator, everything has to be planned out, rehearsed, so there's not a hand out of place," he said.

"The truth is…you don't see everything happening on the other side of the camera, and that it's set up to literally be the least turn on that it possibly could be."

It looks like on-screen love interests Brad and Billie hit it off while filming because Adam Demos and Sarah Shahi's relationship is just as dreamy as it appears on Sex/Life.

The pair met on set in August 2020 and, according to People, they instantly got along.

“I said, ‘Well, that’s a tall drink of water.’ When I first met Adam, I was really blown away with him,” Shahi said.

“We met in the makeup trailer and we just got on instantly. We had the exact same taste in music. We had the same taste in whiskey and tequilas and I was really blown away by him just as a person and all I knew was that I wanted more.”

The pair have since shared several public tributes to each other on Instagram where they label each other as "soulmates".

"Not exactly sure how two people on opposite sides of the world could have more in common, were meant to meet, were meant to be together. But I do know I met my soulmate.

Adam demos says it's "hard to get carried away" in sex scenes.

As we already know, Sex/Life was not Adam Demo's first sex-fuelled TV debut.

Back in 2018, the star appeared in UnReal and in an interview with Kyle and Jackie O at the time, he explained that the sex scenes weren't as sexy as they appear.

"It's not [sexy]. I mean, hopefully it looks convincing, but it's so mechanical, it's ridiculous.

"People ask if you get carried away, but you've got sound guys and cameramen right around you with the big beards. That's a bit of a turn off."

On Sex/Life, he told Entertainment Weekly: "You discuss everything: hand movements, everything down to the breath.

"In sex scenes, the breathing is an emotional thing, so you're discussing that journey, but then you're also discussing each individual's comfort level...

"I was okay with [the nudity] because you read the script and know what you're getting yourself into from the start, so I don't think you would sign on to a show after reading the scripts and then say no last minute.

"That doesn't mean you can't have discussions about comfort level, which they allowed us to have — and with the intimacy coordinator, so it felt a lot safer."

There could be a season 2 in the works

If you've already binged the first season of Sex/Life, you're familiar with the show's abrupt ending.

If you haven't, avert your eyes NOW.

After returning to a normal life with her husband and kids, Billie realises she wants the best of both worlds.

“It was always intended to be a shocking realisation for Billie,” showrunner Stacy Rukeyser said to TVLine.

“She loves both her children, but she’s in this world with other parents who seem to be fulfilled with just this world, and it’s not enough for her. There is this other part of her, this more sexual self, this wild or free part of herself that she wants to experience.

“I don’t know what Brad is going to say to her. He really put his heart out there on the driveway and proposed a happily-ever-after to her, and that is not what she’s proposing to him... I’m not sure if Brad will say yes to that or not. But that’s what we’re hoping to get a chance to explore in Season 2," she said.

... And yes, that means we might get to see a bit more Brad/Billie action.

“I just hope that if we do get to Season 2, we can continue down the rabbit hole because it sure is messy to play. It’s fun to play, and I think it’s just incredibly real.”

'Wtf am I watching.' A very honest recap of Netflix's Sex/Life.

"IT'S NOT PHYSICALLY POSSIBLE." The 9 questions we all have while watching Netflix's Sex/Life.

Want $100? Tell us about your body changes for your chance to win one of three $100 vouchers.

Reply
Upvote
3 upvotes
As physically attractive as this guy is, I couldn't get past the terrible acting.  Only made it through one episode and that was a struggle.