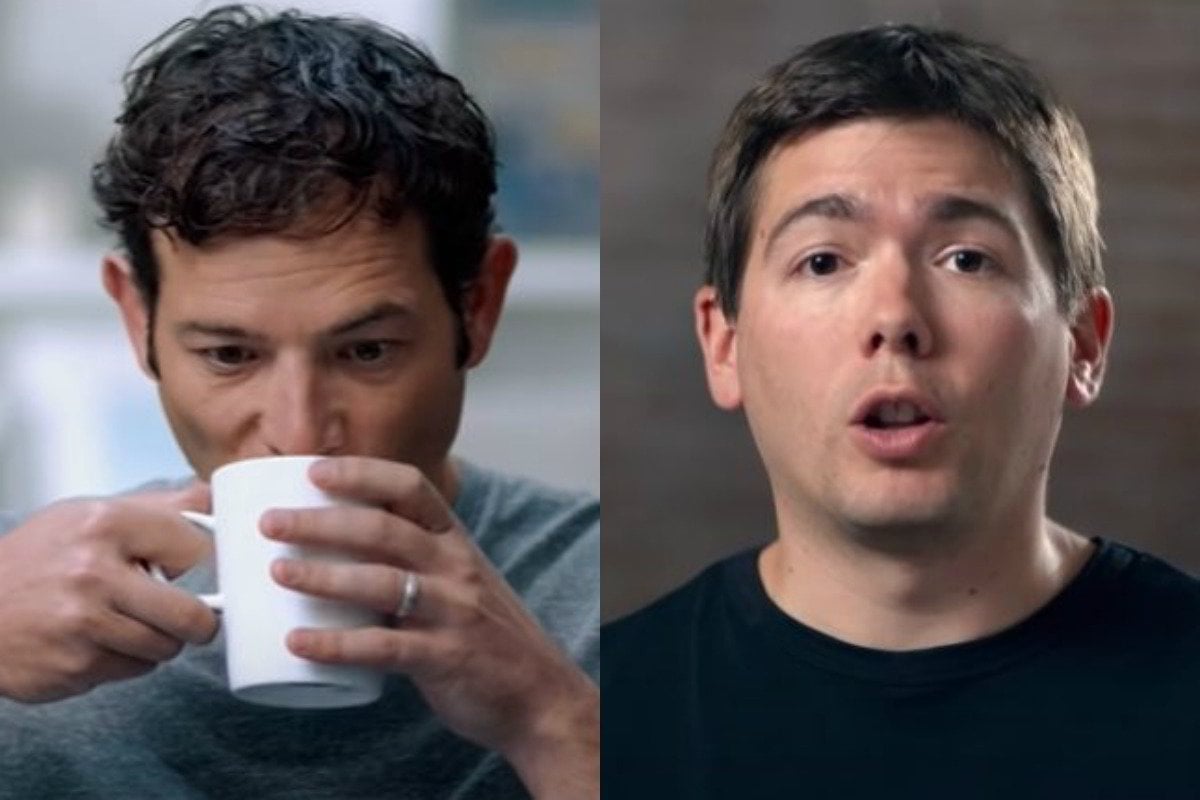 There's something deeply odd about the opening scenes of Netflix's The Social Dilemma.

You would expect them to be smug - almost boastful - given they're the creative minds behind the biggest, most successful companies in the world.

Instead, they're apprehensive. Almost remorseful.

WATCH: The trailer for Netflix's eye-opening documentary The Social Dilemma. Post continues below.

Tristan Harris, Google's former Design Ethicist, awkwardly adjusts his body in his chair. He takes a deep breath and rubs his sweaty palms on his jeans. He licks his dry lips and stares down the barrel of the camera.

Tim Kendall, the former Director of Monetisation at Facebook, gulps down his coffee as his mind races. He shakes his head almost in disbelief.

Another guy from Google laughs awkwardly as he talks about having to consult his lawyers. A t-shirt clad former Silicon Valley boss jiggles his legs nervously, as he's asked a series of questions, like it's an interrogation and he is the suspect.

The first few minutes of The Social Dilemma feels like a true crime documentary, and in a way it is.

The twist is, these former Silicon Valley heavyweights, the people who have created the social networks and apps we use every single day, have turned themselves in.

They worry about the consequences of what they've done.

"I left Google in 2017 due to ethical concerns. And not just at Google but within the industry at large."

"I think we were naïve about the flip side of that coin."

"These things, you release them and they take on a life of their own. And how they're used is pretty different to how you expected."

"Nobody, I deeply believe, ever intended any of these consequences."

"There's no one bad guy, no. Absolutely not."

When asked what the problem is, none of them can narrow it down to one specific thing. They just know that something is seriously wrong, and it's only going to get worse.

Over the next hour and a half, they slowly explain how the products and systems they created have directly led to people fighting in the streets in 2020.

Firstly, Harris explains how our phones - and the apps on them - are tiny pokie machines we carry with us everywhere. There's a whole industry of people whose job it is to make sure we become addicted to their social network or app and remain addicted.

They introduce new features, send us notifications, serve us up more and more of the content we like, and make sure that if we ever put our phones down, we feel like we're missing out.

Our addiction to these social media networks have changed our relationship with the world and even with ourselves. People are more isolated than ever, even though we're constantly connected. We don't know what people look like anymore, because we're so used to seeing everyone behind a filter. We don't know how to be in the present moment anymore, without sharing that present moment on social media.

Mental illness is on the rise and according to the documentary, the suicide rates amongst teenage girls are the highest they've ever been.

Once we became addicted to these apps, and couldn't get through a day without them, they slowly began to divide us into camps.

If you showed an interest in the anti-vaccination movement, you were served up content from climate change deniers. Soon, you were down a rabbit hole of Trump supporters, MRAs and extreme right-wing activists.

If your activity on social media indicated that you believed climate change was a real, very present threat, you were more likely to be served up content about the Black Lives Matter movement and intersectional feminism.

The right became farther right, and the left became even lefter.

Some time over the past 10 years we began to live in separate bubbles and we completely lost our ability to understand where the other side is coming from.

This has come to a head in recent months. Protestors clashing in the streets of America and people cancelling each other on social media isn't an accident, it's the result of carefully constructed algorithms which have been building to this moment for years.

What started out as networks to connect us, have left us more disconnected and fragmented and angrier than ever.

But there is hope.

The people who created these products say it's up to us to demand change. We need to turn off our notifications. Not watch the videos that are recommended to us. Fact check stories before we share them online. Follow people we disagree with.

And maybe, just maybe, delete a few of our apps and go outside and enjoy the sunshine.

You can watch The Social Dilemma on Netflix now.

Netflix’s The Social Dilemma will make you want to throw your phone into the ocean.